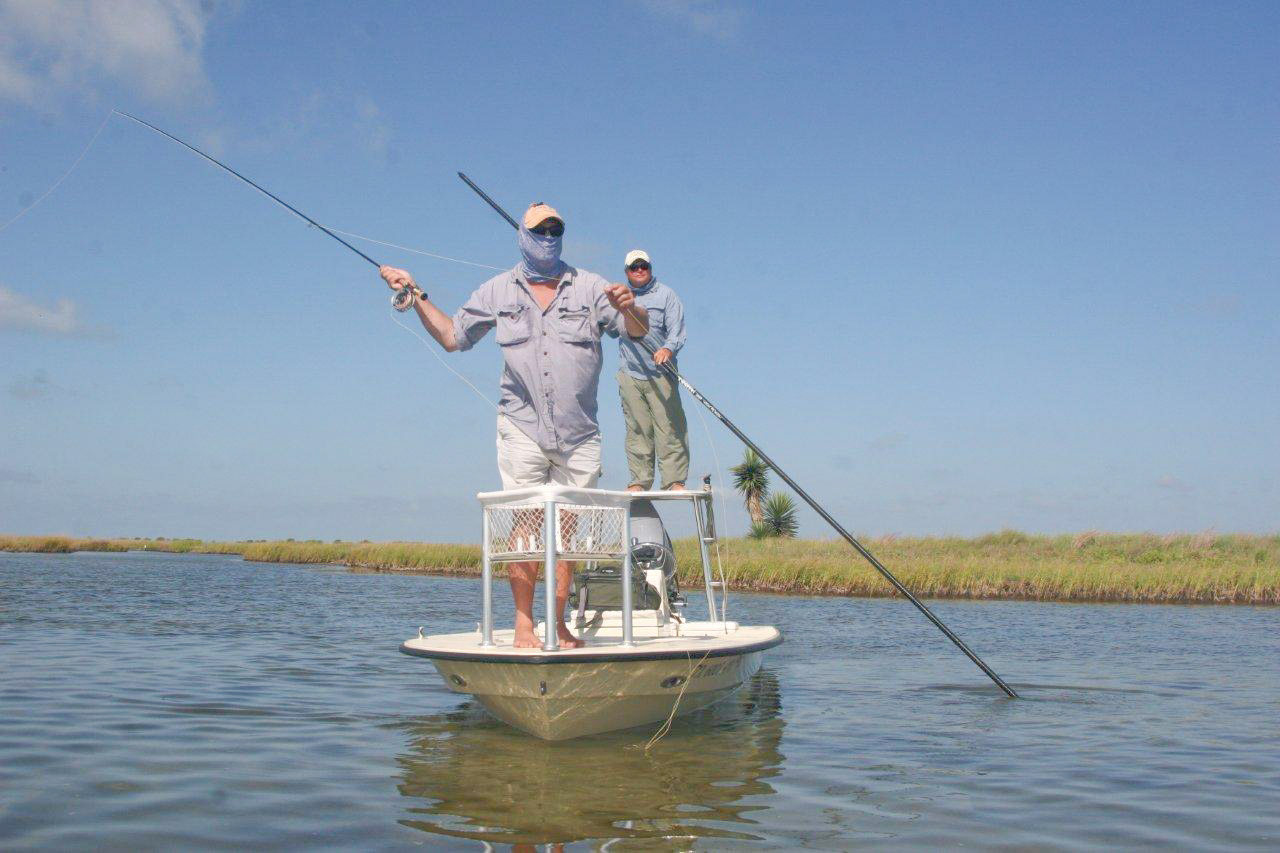 The best clutch cast I ever made with a fly rod was on a tarpon about 20 years ago in Belize. We were poling in a skiff across a vast sand flat near Ambergris Cay.

The solo tarpon was swimming slowly upwind. The five-foot fish looked as bold as a battlewagon in the three-foot water. Guide Gilberto Bradley leaned on the pole.

"Get ready to cast as soon as we get close enough," he panted. "I cannot gain much ground the way he is moving, so it will be a long throw."

The wind was 15-plus and we were forced to push straight into it. I stood with a 9-foot, 10-weight rod on the open bow and checked the coils of stripping line piled on the deck. Bradley gained slowly, then the going-away fish seemed to speed up.

"Senor, you must try now. I can get no closer."

Bradley planted the pole and I let drive. Two false casts and a strong double haul fired the weight-forward line like a laser. The loop formed a tight wedge and drilled at least 90 feet straight into the gusts. I'm not sure where the wind-blown orchestration came from, but Lefty Kreh and Chico Fernandez could not have collaborated on a better effort.

The loop and leader turned over, dropping the dark streamer fly about three or four feet to the side of the swimming tarpon.

The fish sensed the faint splash, saw the settling fly, and turned with a great chromium swirl. It came half out of the water to claim the sudden prize. We could see the dark maw open.

Naturally, I yanked the fly away. I literally snatched defeat from the jaws of victory. The startled tarpon bolted in a roiled wake across the flat.

"No, Senor! No!" Gilberto slumped over the pole. Distraught, I flung the rod into the water.

Recovering the tackle in the waist-deep water was easy, but retrieving the mojo of the world-class cast was not so simple. I definitely was playing way over my head. But one thing is certain: A strong double haul is the foundation of successful fly casting in saltwater.

You are doomed to mediocrity without command of the supercharger of the double haul. The coastal arenas are open and often windblown, no place for the traditional close-range finesse of a dry fly presentation.

The coordinated two-handed effort of the double haul increases the line speed during the final delivery. This aggressive technique not only allows the caster to "shoot" for extra distance; it provides crisper presentations at closer ranges.

You've got power to burn.

Put another way, the routine 50- or 60-foot shots are much easier when your maximum distance under favorable cross-wind conditions is 100 feet. A consistent 60-foot delivery is not so easy if that is your max.

The technique of double hauling was originated during the '50s by steelhead anglers on the big rivers of the Pacific Northwest. They devised heavy, compact shooting heads ahead of thin running lines (often monofilament) and began making remarkable casts. The concept was quickly embraced by pioneer saltwater anglers in the Florida Keys.

The double haul starts either with the pick-up of line already cast, or (when poised for sight casting) with the weight-forward belly of the line (about 25 feet) dangling and trailing from the elevated rod tip. Extra yards of shooting line already are stripped from the reel and piled close by.

As the rod starts forward for the final presentation, the line hand tugs down smartly. This motion carries down near your waist. As the tight loop powers forward, jacked with speed, you release the left-hand line, allowing the forward acceleration to carry (or "shoot") the stripped coils.

Done properly, all the line zings through the guides adding maybe 30 or 40 feet of distance. Presto - a 50-foot cast becomes an 80-foot bomb. If you're on your game, the momentum of the cast snaps the end of the stripped line against the reel spool with a satisfying smack.

I think I'm telling you this correctly. It took me quite a while to figure out the drill. The mechanics are complex and there's a lot of fluid timing going on. But, in fairness, I flogged through the learning stages back in the early '60s with a cheap fiberglass rod and a level "C" line.

No specialized fly shops or qualified casting instructors were available in Houston back then. My only guide were tattered copies of Field & Stream ("A.J. McClane Shows How To Double Haul In Several Easy Steps") and Outdoor Life ("Joe Brooks Makes The Double Haul A Snap").

The confounding diagrams and arrows were difficult to follow with my grasp and gear. I finally got it semi-down. Better equipment certainly helped but it just sort of started coming together - like riding the proverbial bike.

I don't mean to discourage the newcomer; remember, my travails occurred 50 years ago. Things have dramatically changed for the better and anyone armed with balanced tackle and a reasonable feel for the dynamics of fly casting should be able to command a workable double haul after several lessons with an instructor (or competent friend).

Once you get a grip the power is undeniable.

Last year, for example, I was on a bonefish expedition to Christmas Island. The remote atoll is located in the mid-Pacific about 1,200 miles due south of Honolulu, and ranks as one of finest wade fishing venues in the world.

Ironically, our best fishing for large bonefish was not on the miles of knee-deep white sand but in a channel feeding an area known as Paris Flat. Schools of pre-spawning bonefish roamed the green channel during the full moon cycle. The situation was far from classic for the shallow-water sight caster, but the payback was repeated hookups with 5- to 9-pound bonefish.

(The flats purist might squawk at casting into a trench, but anytime I can light up a Tibor reel with a big bonefish I'm open to suggestions.)

It was exciting but it wasn't easy. To reach the channel, we were forced to cast straight into a 20-mile-per-hour trade wind. And we were using large bonefish flies with heavy lead "dumbbell" eyes to get a decent sink rate amid the chops and currents. The heavier the fly, the harder the casting.

You stood near the green edge and waited for the dark mass of several dozen bonefish to appear. Then you loaded up and fired 70 or 80 feet, hoping to miss your ear and the back of your head and get the heavy fly in front of the passing school. A strong double haul, driving low and hard into the gusts, was critical.

Christmas Island south of Hawaii might sound extreme but Christmas Bay south of Houston can offer a similar circumstance for reds or trout. The double haul can put you in fish out of range of the conventional fly cast.

The proficient hand learns a few tricks to enhance the program. With a bit of practice, you can shoot line on the back cast, adding bonus yards to the final delivery. Just make sure to keep a firm grip on things; a good way to look really bad in a hurry is to bumble and fumble and lose control of the line during the backswing. The cast falls in a rubble behind you as tailing reds root out in front.

On the subject of "out in front," shooting line with a double haul is not a terribly accurate presentation. As you release the line you forfeit the accuracy allowed by a firm hold. But it's a great way to maximize distance when covering water.

For accuracy, shoot several yards through your fingers then hold tight for positive control on the presentation. Holding tight also is a good way to slam a low cast under low branches or docks. The side-arm loop turns over with maximum velocity; conversely, shooting without snubbing bleeds off power and robs you of the extra kick to bounce a fly or popper up into the shadowed kill zone.

A big mistake when hauling is to flail too hard; the motions should be smooth and tight, with a coordinated burst of juice during the final pull. The important thing is to allow the back cast to straighten, loading the rod before you power forward. If the casting arm and rod tip drift back a tad while allowing the back cast to unfurl, so be it.

Another mistake (common in all fly casting) is making too many false casts. Don't grow old with the line snaking back and forth. You are not trying to fan the hackles of a dry fly. You are trying to drop that mullet-imitation streamer several feet ahead of that 30-inch trout cruising across the sand flat. The longer you struggle trying to hold the heavy line in the air, the sloppier the timing tends to become.

This especially is true if wind is an issue. Four strokes - two back, two forward - should do it under normal circumstances. Certainly no more than six.

And don't strip off more shooting line than you can realistically use. Be savvy; pay attention to changing circumstances. The extra coils that aren't going anywhere are a tangle waiting to happen. And - trust me on this - when a fish is in your crosshairs take a moment to insure that all the stripped line is ready to rock.

Afloat, this means you are not stepping on the coils. Nor are they wrapped around a cleat or snagged under the hull. Afoot, this means stopping and pulling the trailing line closer, easier to rip from the surface. While you're at it, make certain no stringing grass is clinging to the line.

Assuming the shooting line is clear, the properly executed double haul will seriously upgrade your coastal game. Come to think of it, in the realm of fly fishing it really is rocket science.