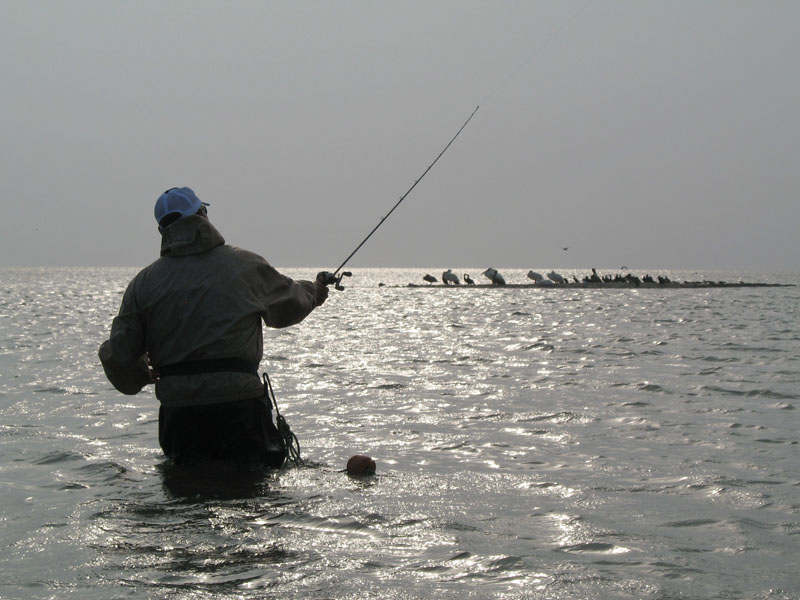 Channels between oyster reefs can hold fish in primary bays during periods of moving tides.
Salty Everglades guide Jim Conley stopped wading, glanced at his watch, and motioned to the anchored flats skiff.

"We need to leave now. I want to hit the start of the outgoing tide at my next spot. Once the water starts moving good, some big snook should be stacked up in there. But it doesn't last longwater gets too low."

Conley's secret spot was a 45-minute run at open throttle past the hundreds of small islands and "keys" south of Chokoloskee. It was a small channel between oyster beds near the mouth of one of the rivers draining the Everglades National Park.

How he found the hole amid the myriad of twists and tangles, I have no idea. But I suppose that after more than 50 years of fishing experience in the region, you learn a few things.

We idled up to the outside of an oyster bar and bailed from the skiff. Tide was running smoothly through the narrow trench and ragged clumps of brown and gray oyster shells already were showing against the dropping level. Southwestern Florida experiences typical tidal swings of three to four feet – amazing fluctuation compared to our crescent of the Gulf of Mexico.

The outgoing current was prime "red water" stained by the tannin of the river mangroves. We waded to the edge of the dropoff and began casting 1/2-ounce leadhead jigs rigged with five-inch plastic tails.

Within five minutes, Conley leaned against a hard strike and the furious boil of a grown-man's snook. Moments later, my line surged tight with the thrilling signature of a powerful fish.

We worked the 50 yard stretch for about an hour and landed six or seven grand snook – all in the 15- to 20-pound class. A six- or seven-foot bull shark nailed another one about 10 yards off my rod tip. Then it was over; the tide dropped too low and the school pulled out.

My first impression was that Conley certainly knew his fishing. The second was that wading and casting lures for big snook carries the game of plugging to its highest form. My pair of catch-and-release 40 inchers was a pinnacle session.

The third observation was that unless you understand and respect the lunar tidal movements you will never reach the post-graduate level in serious inshore fishing.

Tidal movements play a role in virtually every coastal region. The effects might be less pronounced in some venues but the positive/negative influence is there.

This talk of tides might seem sophomoric to crusty old salts but Texas Saltwater Fishing gains new and inexperienced readers each year. Frankly, even some veteran anglers aren't as tuned to the tides as they should be.

Tidal swings along the Texas coast typically are in the one- to two-foot range, not too dramatic, but the changing levels can make a significant difference in fish movements. True, the best time to go fishing is when you can, but playing tides to best advantage certainly helps.

Most days offer four tides (two incoming, two outgoing) in the 24-hour period. These "double tide" days usually are superior because the water movement is aggressive, with each tide compressed within a period of several hours. All this movement not only ignites feeding, it can pull better water clarity within reach of a specific area.

Or, on the downside, the movement might bring a belt of sandy water into your previously "trout green" arena. Well, nothing's perfect.

The Texas coast sometimes is plagued with froggy "single tide" days. Or, you might get three tides during the 24-hour clock. Frankly, I never have understood how all this works (read above: "some veteran anglers aren't as tuned..."). In defense, I'm not a bloody oceanographer. And, at this stage, I'm too old to worry about it.

But one-high/one-low cycles do occur with alarming frequency. The so-called "trickle tides" move slowly over many hours, not in a particular hurry to get anywhere. And neither, apparently, are the trout and reds.

Regardless, the idea is to be in a spot that favors a particular tidal movement. The closer you are to the open beachfront, the more pronounced this factor becomes. You want to be casting across the prime water maybe an hour or two after the flow commences (keep in mind that at full high or dead low the current stops before slowly reversing and gathering momentum).

For example, the surf wader usually wants to put a jiving plug or a kicking shrimp across a strong incoming tide under the rising sun. The early push encourages bait and predators to move closer to the beach. And, as mentioned earlier, the influx often brings green Gulf water within reach of the second or third bar.

Conversely, the outgoing tide is taking it all away. The first hour or two of an outgoing can be productive, as plenty of water is still on the beach, but the dregs usually are lousy. The action simply moves too far off the beach.

An excellent place to fish an outgoing tide is in the channel of a free-running pass. Fish concentrate in the trench to feed on bait being carried out with the flow. It's also an excellent place for the careless wader to get into serious trouble; one step over a steep edge and you start tumbling. Wear a flotation device and remember the old adage, "calm waters run deep."

A free-running pass creates a virtual river during the peak hours of movement. You can see the current rippling and weaving. The wader's cork-rigged stringer runs straight with the flow. When fishing such a setup, a good technique is to quarter the cast "upstream," allowing the lure or bait to descend through the water column during the retrieve. Unless you really want the bottom (flounder, for example), use only enough weight to allow a slow drop as the current carries the cast.

Up in the primary bays, the same outgoing pattern holds true around the mouths of bayous and cuts draining adjacent flats or back lakes and estuaries. These "gutters" especially are good for redfish and flounder.

Other good low-tide spots in the bays are defined holes on flats, and channels through oyster reefs. Fish can stack up as water pulls off the surrounding shallows. Incidentally, a so-called hole in a Texas bay may not amount to much, maybe only waist-deep, but it's sufficient to attract a wad of opportunistic fish.

Conversely, on the rising tide, the shorelines and shallow bars and reefs often draw life. The specks and reds may be scattered – one here, one there – but a single stretch of perhaps 100 yards can produce outstanding action as the water fills in. This can be a prime situation for intercepting a big sow trout as it noses into a foot or two of water over sand and grass. You could do worse than to work the area with a topwater plug.

The secondary bays or "back lakes" don't experience much tidal movement during the normal daily swings; however, a major tide caused by extreme circumstances can impact these remote areas. For example, a three-foot "bull tide" during the autumnal equinox can scatter fish well back into the marshes.

The same influence can be created by honking 20- to 25-knot onshore wind. The sustained energy pushes Gulf water onto the beaches and through the passes and into the bays, resulting in higher-than-normal tidal levels. A low tide might still be a foot or so above the normal high tide – most confusing.

A hard "norther" creates the opposite effect, blowing water from the back lakes and upper bays and chasing fish to deeper channels. Technically, these wind-generated fluctuations are not true tidal movements but the results are similar.

These are a few of the circumstances influenced by tidal movements. Of course, nothing out there is absolute. Except maybe the tides, themselves.

Tide charts for regions all along the coast are tabulated well in advance and are available through various print and web sources. This information can be a great ally when timing a trip; however, the tabulated site and your chosen spot may not be on the same schedule. In fact, they almost never are.

It remains through trial and error to figure the timetable for a specific channel or flat or stretch of beach. The good news is, you've got a margin of error of several hours in which to work. Fish the spot several times and you should get a reasonable grasp of when to be there based on the nearest tabulated tide.

And connecting with those "glad tidings" can be a big deal in successful coastal fishing.