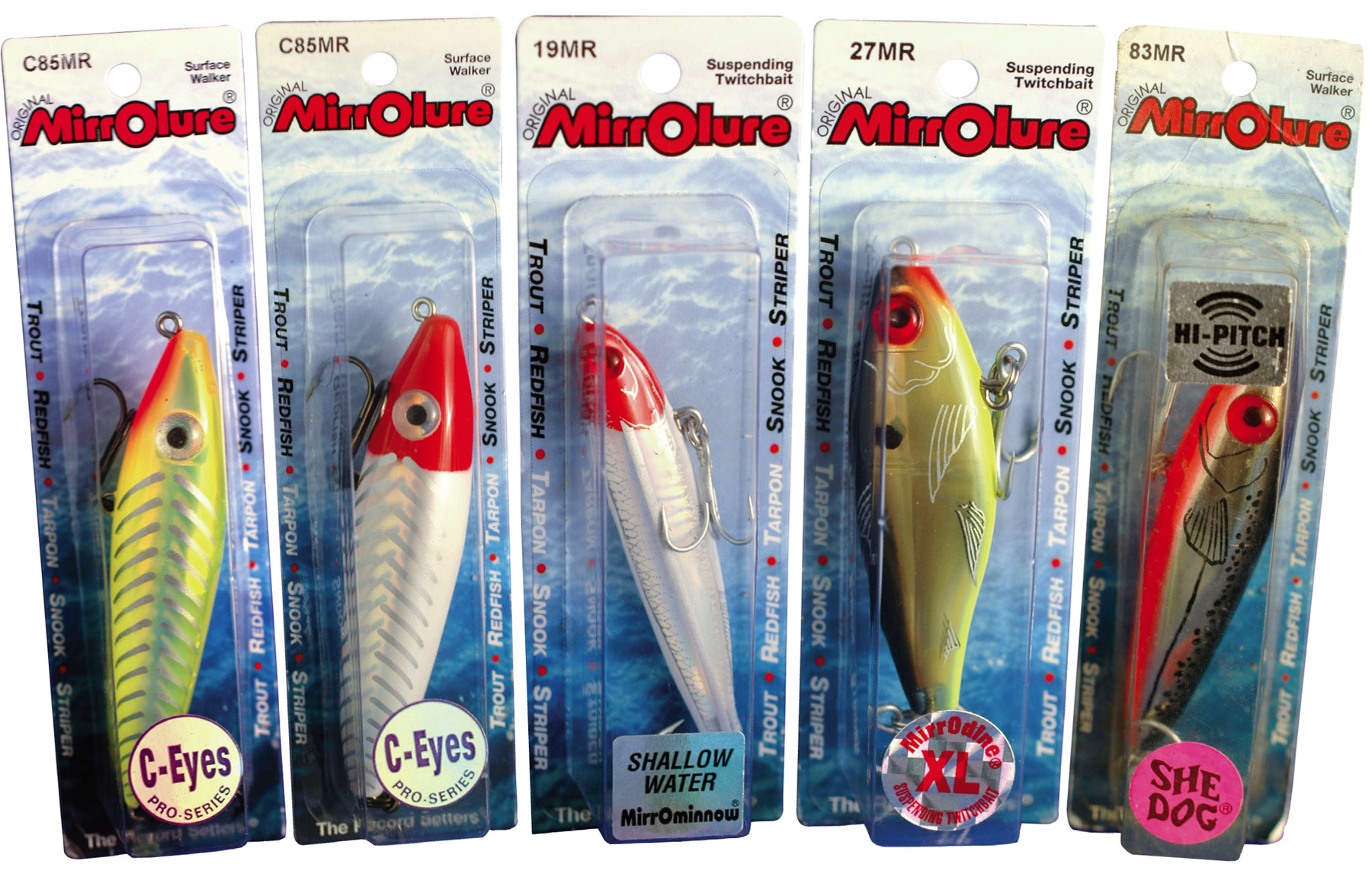 When Old Man Gulf throws a fit and send a “froggy” tide the MirrOlure family of floaters and subsurface twitchbaits with loud rattles can make a difference.
King Xerxes, ruler of ancient Persia, once became so vexed at the sea that he whipped it. Well, that's not quite correct.

Apparently, the king didn't want to get his feet wet. According to legend, Xerxes ordered his slaves to grab whips and rush into the water and flog the contrary sea to a froth. Buck me, will you? Take this and that! And that and this!

The grumpy old despot might have been delusional but I submit that he is a candidate for the patron saint of coastal anglers.

I mean, what plugger has not despaired over a rubble of sandy chops and, at least in spirit, wished to lash out with his cord stringer. Turn southwest on me, will you? Whap! Slap! Have some of this!

A little stringer-whipping probably is good therapy, similar to the pillow fighting between feuding couples encouraged by some marriage counselors.

This sense of frustration especially is true along the upper coast, where the grace of green water seldom can be taken for granted. The whims of wind and tide can erase primo conditions within scant hours.

The fact that most of the upper coastal angling population lives inland only adds to the stress. A frantic drive of 50 or 60 miles often is required to reach the beach.

There is a reason why upper coastal anglers are "green with envy" over their counterparts along the lower coast: The massive Mississippi River drainage belches its turbid runoffs into the Gulf, and the prevailing currents off the delta run west. This explains why we get the frog water and the brown sand while Florida Panhandle's "Miracle Strip" boasts shockingly clear water and sugar-white sand.

The on-going flushes of silt and sediment tend to suspend in the water column and, sadly, not much contrary influence is needed to stir things up.

Assuming no funky algae blooms are at play (brown tides, red tides, etc), wind is the biggest factor controlling water clarity. Too much velocity can be a major deal killer.

For example, you might reconsider the dawn patrol if the smiling 10 p.m. TV meteorologist says something to the effect of, "An area of low pressure developing along the upper coast is expected to intensify before moving inland in advance of the fast-moving Pacific front."

Actually, William Shakespeare knew how to put more flair into a weather forecast. In the play, The Tempest, Prospero says: "I have bedimm'd the noontide sun, call'd forth the mutinous winds, and 'twixt the green sea and the azur'd vault set roaring war."

No question, the Bard of Avon would have been prime time. But, by either interpretation, when the wind starts honking and the surf starts churning the odds of "green sea" can take a serious hit.

I should note that decent clarity occasionally will hold under whipping gusts from the east or southeast. The "sweet southeast" blows from the open Gulf along the curve of the upper coast. That straight-on angle helps groom the sandbars in the surf while providing protected bay water behind the barrier islands.

But don't count on this. Whenever a serious wind is freshening, try to confirm before committing.
Worth note here, afternoons usually are windier than mornings. Looking at snapping flags and whitecapping chops under the rising sun is not the best foundation for an "ice cream" day.

Years ago, Ray Fiveash and I were driving south on an ill-advised pre-dawn expedition. Heavy weather was pouring off the Gulf and a mini-twister plowed ashore ahead of our advance. We pulled into an all-night truck stop for coffee.

Trash cans, broken signs and assorted debris littered the wet parking lot. The haggard waitress looked up. "They clocked a gust at 109 miles per hour just down the way," she said.

Fiveash pondered his coffee mug and looked up. "What was the wind direction?"

"Dammit!" I exploded, knowing we were totally and royally screwed. "If it was 109 miles per hour, what the hell difference does it make!"

If nothing else, the incident perhaps was the high-water mark for green-water optimism.

On the subject of "mutinous winds" there is no heartbreak like that which stirs from the dreaded southwest. That soul-deadening side-shore angle runs right to left up the coast and quickly churns sandy currents. Not to mention lower-than-normal tides.

You don't need "roaring war" to wreck green water prospects along open beaches and exposed bays. A minor skirmish will suffice. A sustained SW of only 10 or 12 miles per hour can turn rich green to sorry brown within a single tide. It's been claimed that a mere puff can muddy an open bottle of Ozarka on West Galveston Island, but that's probably an exaggeration.

A few exceptions exist protected side-shore corners such as the Bolivar Pocket at the base of the North Galveston Jetty, and the beachfront side of the Surfside (Freeport) Jetty. But even these areas wash out following a day or two of pumping southwest wind.

A straight south isn't much better, although traces of green may hold longer under light to moderate velocity. You really want some east in there somewhere.

Water temperature also can be a factor. Sustained runs of green water seem more frequent during the cold-weather months especially along leeward shorelines in the primary bays. I assume warm-water sediments suspend faster. This is just an educated guess; I am not a qualified marine biologist.

But, for whatever reasons, summer tides often are froggier than winter tides.

Ironically, as much as upper coastal pluggers lust for green water, there can be too much of good thing. Maybe you can't have a car that's too fast, or a girl that's too pretty, or a rum that's too old but you can have water that's too clear.

At least it's too clear for consistent success when chunking lures. Snook fishing in the Florida Everglades is a good example; the experts shun the super-clear grass flats and seek out the tannin-stained "red water" flowing from the various rivers. Lurking snook are more aggressive in the dark currents, more apt to slash out at passing lures.

Much the same situation can occur in the Laguna Madre country of the lower coast. Veteran anglers often search for sandy-green belts of reduced visibility. Fish simply are easier to fool with lures when they don't have the opportunity for deliberate inspection.

A "gin clear" flat on a bright, calm day is great for spotting and sight-casting, but big trout and reds often are skittish. They certainly are quicker to spook with a careless approach or a sloppy cast.

What the salty upper-coastal plugger looks for is the euphoric state known as "trout green" water with a visibility of two to three feet. It has a rich oily look and the plankton-ripe tide even smells fishy. The conditions are excellent for aggressive sight-oriented strikes.

If an upper coastal beachfront or bay gets too clear and too calm for too long, fishing often suffers. The water seems to stagnate. Of course, except during a major summer lull, too much clear water seldom is a problem.

More likely will be a run of "sandy green" water. This is not all bad not as pleasing to address as a trout-green tide, but certainly capable of producing good fishing. As long as visibility is a foot or so, you are in the game. And, a big plus, the sow trout cruising right over there has a harder time figuring you are a player.

Under marginal visibility, lures that transmit considerable sound, flash and motion get the nod over slower, softer finesse baits. Or, you can semi-cheat and use one of the scent-impregnated plastic tails. They can be killers as the emphasis in sandy water shifts to scent-oriented feeding. Suspending the tail under a popping or rattling cork helps attract fish.

But I maintain that a slimy "artificial" soaking in a tub or pouch of noxious goo is not what green water is all about.
Of course, the positive alignment of green water is no guarantee of success. Even a green tide popping with bait is no sure deal. But the sparkling water is a balm for the spirit especially after several wind whippings from Old Man Gulf. Just doing it right, laying the long smooth casts across the shimmering expanse, reinforces the experience.
In truth, the secret satisfaction of green water has more to do with the fishing than the catching.