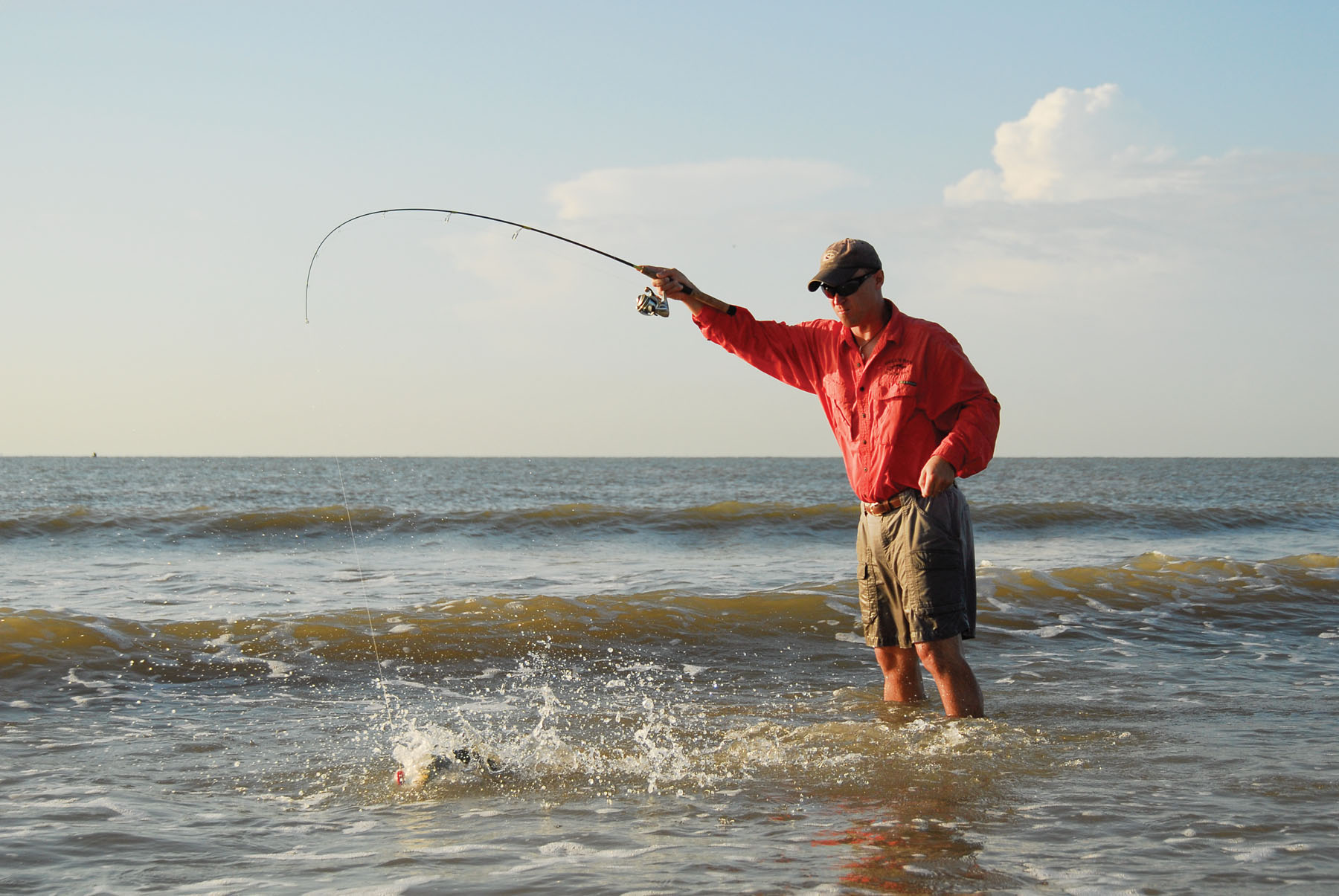 Wading the surf is a Texas classic. The open beach is accessible and inexpensive and, when a green tide is swelling onto the sand, the light-tackle fishing can be outstanding.

Problem is, the open beachfront is really hit or miss, the most fickle of all inshore venues. And it can be most inconsistent during mid-summer, the traditional vacation season. July and August often are plagued with prolonged spells of sandy water. This especially is true along the upper and middle coast. Recurring winds from the south and southwest blow side-shore, hitting the sandbars at odd angles and stirring the sediments.

The same winds tend to push water out, creating lower-than-normal tides – seldom a good thing for the beachfront wader.

Hot conditions can be another negative. When inshore water readings climb into the upper 80s, the prime window for fishing usually occurs during the first two hours of daylight.

Once the summer sun gets high, the action tends to move to deeper water. This pattern puts a premium on the dawn patrol, and the dawn patrol (at least for urban traffic) demands a brutal alarm clock. And, perhaps the ultimate irony, the surf can get too calm during the dog days. A sustained run of dead-flat, low-tide "frog water" seems to discourage active feeding within reach of the beach.

No doubt, the summer surf can provide flurries of outstanding fishing, but the "ice cream" days can be the exception rather than the rule.

What many anglers relatively new to coastal fishing may not realize is that the Indian Summer of early fall is prime time for beachfront fishing. Several factors support this statement.

First, the weather patterns are more favorable (well, barring the arrival of a tropical storm). Wind often is from the "sweet southeast," or light offshore behind an early-season cool front. Both encourage "trout green" currents to linger.

Also important, tides often are strong – on average, higher than normal pushed by the prevailing wind and the influences of the autumnal equinox. Even behind the weak northers, the offshore flow seldom is sufficient to trigger significant drops in water levels. Any dips seldom last long.

And, as stifling summer heat relaxes and the calendar days shorten, coastal water readings begin cooling. The early-season fronts help the process. Surf readings in the low 80s to high 70s hold into October unless something really out of the ordinary happens.

The combination of strong tide, fishable clarity, and tolerable temperature opens the entire day to productive fishing. An early-afternoon session can be as good as the dawn patrol, assuming a rich incoming flow is swelling onto the sand.

This all-day potential offers another option: Early fall is the best time of the year for family-type outings. This casual drive-to fishing is available all along the Texas coast. A great treat is cooking your catch right on the open beach. You can wade and the younger kids can soak "fresh dead" in the first gut.

With any luck, the combined efforts should be able to grease a skillet. Worst case, you've got backup hotdogs.

The serious campaigner might tote a big rod or two and bait with finger mullet or cut mullet. Early fall is dead center for surf runs of "bull" redfish. Not to mention jack crevalle, tarpon, and various inshore species of sharks. Try to key on a stretch of beach with deep inshore "guts," or channels between the parallel sandbars. The trenches encourage the heavyweights to ride close.

Incidentally, if you are serious about the big stuff on the beach, read Billy Sandifer's regular articles in Texas Saltwater Fishing. He's a real pro in this specialized arena.

I must admit I'm not the world's biggest fan of beach camping. I've done it on occasion (mainly years ago on remote Gulf beaches accessible only by boat) but favor a hot shower, an A/C, and clean sheets. But if that's your call, it doesn't get any better than October.

Teaming with another vehicle provides security and safety during an overnight expedition; if nothing else, the additional manpower and horsepower can be wise insurance against soft sand. But with reasonable caution you can camp without issue and in tolerable comfort - or enjoy a full day then retreat from the beach and hope that Tom Bodett of Motel 6 fame left the light on for you.

As another plus for the family outing, traffic is reduced following Labor Day. I'm not claiming the beach is deserted, but hunting seasons, school/sports activities and social obligations do reduce the congestion normally associated with summer weekends.

One warning: On the backside of a light norther, be prepared for mosquitoes being blown from the saltgrass by the offshore wind.

Several angling options are available, but wading with "trout tackle" is the main event. Both lures and live baits are effective. Either way, the grab-bag potential is excellent during the mild weather of Indian Summer. Anything with an inshore passport is apt to swing within range.

In addition to the A-Team lineup of speckled trout, Spanish mackerel and redfish, the "usual suspects" include flounder (especially near passes during the fall migration from bays to beachfront), skipjacks, bluefish, croaker, sand trout, whiting, black drum, gafftop catfish, pompano, on and on. Down south, maybe even snook.

And, to keep things interesting with the light trout rod, "something big" might clamp on; if a six-foot tarpon erupts on a 52M MirrOlure, about all you can do is hang on and holler. It's hard to whip a full-blown tarpon while standing flat-footed in the surf; a flimsy terminal connection will fail or you'll get cleaned when the fish gets the line over a shoulder and heads for the open Gulf. Great fish story, though.

The live-bait specialist usually rigs with a popping cork or rattle-type cork. The float serves two advantages: First, it provides additional weight for confident casts across the wind and surge, second, it suspends the bait (usually a kicking brown shrimp) about midway in the water column, above the bottom-hugging riff-raff such as hardhead catfish and stingrays.

Spoons, jigs, and plugs all are effective. Keep in mind that reaching out and covering water can be a big plus in the open surf, so use a suitable payload that will cast with authority. Remember, also, the surf wader usually must chunk into the prevailing onshore wind. You might gain a slight angle (usually by shuffling left-to-right against the east/southeast), but it's still more demanding that the downwind cast afforded the bay wader or drifter with the barrier dunes at his back.

Last month I championed the spoon, and I stand by that statement - especially out on the third bar. No trout-type lure whams into the wind as well as a compact metal spoon. Many big-trout specialists favor mullet-imitation plugs, and the soft-plastic tails are excellent for grab-bag duty. But, to reiterate, when extra yards into the wind matter, nothing this side of a Nosler bullet will outgun a proper spoon.

Use some sort of leader when casting lures in the grab-bag surf. The breaking surf seldom requires a finesse approach. The water is turbulent and the fish are in a killer mode.

A 30-pound monofilament "shock leader" or a short length of brown wire will minimize cutoffs, especially when mackerel (sharp teeth) or ladyfish (sandpaper jaws) are on the tide. Also a thought, throwing a loop knot into a three-foot mono leader allows you cheat and rig two jigs tandem. Stagger the jigs to minimize tangling during the cast and amid the waves.

On the subject of waves, "flat" days can be the exception during early fall. October is one of the most consistent months for surf on the Texas coast; the nearest surfer will support that claim. This apparent contradiction may require explanation.

The surf may be breaking on a given day but the water clarity often is fishably green. This is because the swell typically is generated by the prevailing onshore wind. The waves hit the bars at a clean angle. Don't be discouraged if several rows of breakers are showing - assuming the lifting swells beckon with that gorgeous trout-green sparkle in the morning light.

The waves can be your strong ally. The rolling surf pushes more tide onto the beach and the recurring whitewater provides "cover" for predators moving close. The turbulent foam also oxygenates the inshore water.

And, a big plus, the savvy wader can use the consistent pattern of breaking waves as a roadmap; pay attention, and you know exactly where the shallow bars and "hat floater" guts are located. When it all looks the same on a flat day, finding the outside bar can be a toe-touching gamble.

Maybe under high sun you can see the shallow bars, but don't be fooled by shadows. It's a rookie mistake to chase a retreating cloud and overshoot the outside bar. Keep going, and the next firm footing will be the terrace of the Riviera Hotel in Havana. I've been there; it's a nice place to relax, especially with a glass of dark Havana Club and a Montecristo No. 2, but I don't recommend swimming.

No kidding - pay attention when wading the surf. The open beach can be an exhilarating and rewarding fishing experience, especially during early fall, but don't get in over your head.

Respect the breaking waves and powerful currents and, oh yes, if you want the outside bar (and sooner or later every surf wader does) always wear a flotation vest. The pockets are handy for stashing tackle and the snug insulation helps cut early chill; most important, if you lose the bar the vest might spare a very bad time.

They don't call it a "life jacket" for nothing.