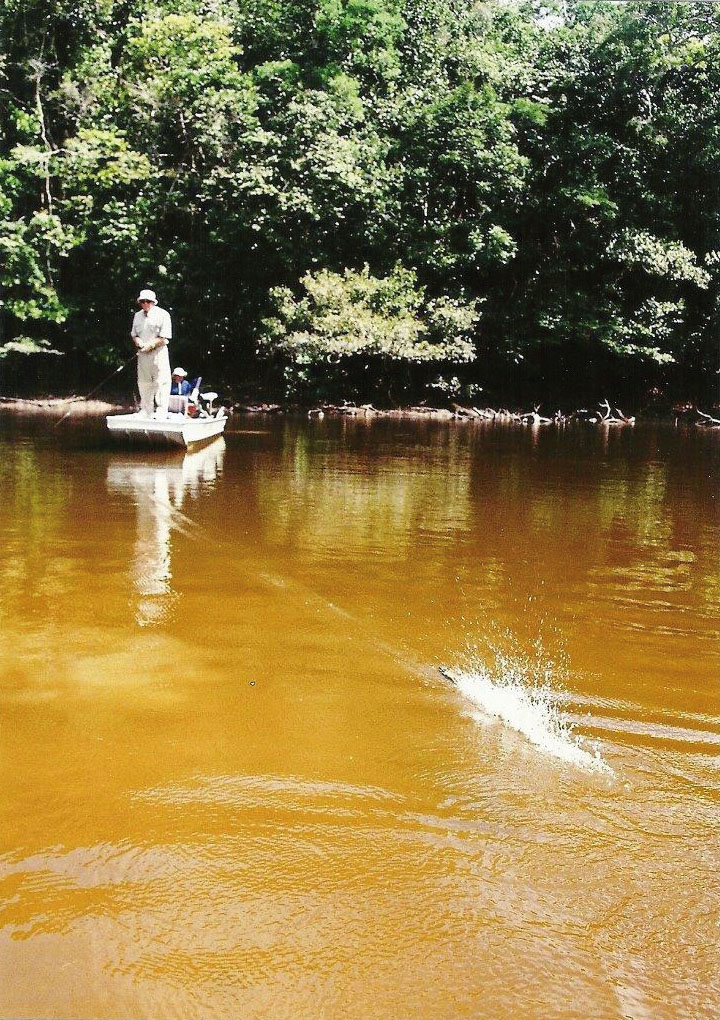 Slush baits can be “ripped” to create fish-enticing surface commotion.
Penascal Point on the southern tip of Baffin Bay was wild country back in the mid '70s. Support systems were hours away and nobody knew the coordinates of all the shallow "rock piles" at least, nobody in our boat had a clue.
We just knew we had made a long run from Bird Island and that we were in fabled big trout water.

The windblown shoreline was sandy-green and choppy, stirred by southeasterly gusts pumping across the Laguna Madre. Ahead of our bouncing drift, a brownish blur suggested one of the fossilized worm mounds.

I thumbed the silver Ambassadeur 5500 and cocked the 7 1/2-foot Fenwick HMG rod, amazed again at the lightness and responsiveness of the new material. Trim graphite blanks made the old hollow fiberglass sticks feel heavy and slow.

A downwind cast dropped the surface plug just beyond the dark blur. The lure was a 5M MirrOlure, a three-hook model similar to the standard-issue sub-surface 52M but a floater fitted with silver propellers on the nose and tail.

It was a slush bait designed to be ripped with the whirring props in a stop-and-go retrieve straight across the surface. I had used similar baits for years on largemouth bass but the concept wasn't my notion of a trout killer; however, several crusty old salts vowed the prop plugs were a go-to choice on big specks "down south."

Few Galveston Bay anglers, if any, regularly used surface lures back in the '70s. We chunked the 52Ms and Bingos, and Dixie Jets and Johnson Sprites, maybe even some of the new soft plastic "Tout tails."

The elongated blue and silver bauble with its silver blades floated amid the sandy chops and bumps. I reeled tight, lowered the rod tip, and gave a smart sideways yank.

The lure ripped forward as the props churned a white trough of leaping, sputtering spray. The sudden commotion made a bold and "fishy" statement in the heavy water. I reeled up the slack, aimed the low rod back down the line, and yanked again.

The heavy boil and thick flash of a big speckled trout erupted from the rock pile. Naturally, I panicked with a rookie mistake. I struck on hair trigger at the sight and not the weight. The plug sailed past my ear and landed in the water behind the boat.

I reeled frantically and made another cast. The fish came roaring back and the rod bent against serious weight. That trout weighed 7 1/2 poundsmy first big one on a topwater lure.

You don't hear much about the so-called slush baits these days. But they were a top-tray choice among veteran pluggers on the Laguna Madre complex during the '60s and '70s. Popular models in addition to the 5M MirrOlure (by L&S Bait Company) were the Heddon Baby Torpedo (smaller and more subdued, with a single tail prop), and the Heddon Wounded Spook (larger, with big twin props).

The Bill Norman Wounded Flash with twin props (long discontinued) was another excellent choicea great combination of correct heft and image with good blades and solid trebles. Another standout with no-nonsense hardware was the single-bladed Dalton Special. The Smithwick Devil's Horse with fore-and-aft props (a great bass plug on Toledo Bend and Rayburn) was effective but the trebles were a bit puny for serious saltwater duty.
Numerous other slush baits were available, mostly crossovers from the freshwater bass market from companies such as Shakespeare, Creek Chub, and Bomber. Oddly, you seldom saw gold or copper blades; seems as if they would be great under conditions of subdued lighting.

But, regardless of color, the assorted propellers effectively were silenced during mid-'80s by the rapid rise of the "dogwalker" plugs.

The side-to-side dogwalkers were spawned by another classic bass plug, the old wooden Heddon Zaragosa (followed by the hollow-plastic Zara Spook version). The soft action of the skating and sliding especially is effective in shallow water or on a calm or slightly riffled surface.

The Zara might have been the blueprint but I feel safe in saying that the first dogwalker to gain widespread popularity along the Texas coast was the Rebel Jumpin' Minnow.

Other early pacesetters on Texas tides were the Excalibur/Heddon Super Spook and the MirrOlure Top Dog. Variations of each followed and, now, saltwater tackle shelves are filled with dogwalkers from many manufacturers. Frankly, if you're talking topwater plugs, that's about all you see.

The elongated dogwalkers share two attributes: They cast like bullets and they utilize hollow rattle chambers. Oh, yes, one other thingthey are absolute killers under proper conditions on big speckled trout and redfish.

But so are the slush baits. They were effective prior to the zigzag hysteria and they can still earn high marks. This is assuming you tie one on and chunk it into a green tide. I suspect many younger anglers never have used a slush bait in saltwater. As with me those long decades ago, the critical confidence factor is lacking.

Here are a few advantages of the forgotten prop plugs:
First, similar to the dogwalkers, they cast well. They have good ballistics. OK, the props might grab a bit of air but the drag is minor. They certainly are superior to the flapping of a jointed "broken back" floating/diving plug or a lightly weighted soft plastic. The free spool caster of reasonable ability should be able to wham one into the wind with no problem.

And, on the subject of wind, the typical slush bait creates fish-attracting surface commotion across the all-too-common choppy surface. One prop or twoseems to make little difference, assuming the plug is properly balanced and the blades turn freely.

Of course, you can soften the slush-bait sputter by slowing the tempo. The props twirl and churl amid a subtle wake. In this ability to go from aggressive to passive, the dogwalkers are somewhat limitedthey simply are not designed to create this type of commotion.

This is not to say that a dogwalker cannot summon strikes in rough water, but the soft action does tend to get lost amid bouncing whitecaps and running foam lines.

The ripping action of the spraying props also can trump sandy visibility or deeper depthsomething to keep in mind when plugging the windblown edge of a channel.

As another advantage, slush baits are easy to work. Even a rookie can talk trash with them. You sling it out and punctuate the short, straight yanks with brief pauses. None of the practiced dogwalker cadence between rod tip and retrieve speed is necessary.

And the slush bait is less tiring to fish because you are not constantly jiving your wrists and forearms to maintain the zigzag action. For example, the drifter making repeated blind casts can brace the butt of the rod against his hip while imparting a sideways yank (the low angle keeps the plug churning across the surface rather than lifting into the air).

You can cheat by rotating slightly in the direction of the yank. The wrist and forearm remain locked with little strain against the braced rod.

Each slush-bait yank is maybe one to two feet. At the conclusion, the rod tip flips in a flat arc back toward the plug, and the brief slack-line pause allows the momentum to re-rack for another soulful slush. The drill is easy to master; you just add water and repeat as necessary until the surface blows up amid spotted glory.

On that note, the strikes on prop bait usually are solid. All those bursts of spray tend to really jack up nearby predators. As an example, look at the videos of peacock bass in the Amazon detonating on big rippers such as HighRollers. If you've been there, you know what I'm talking about.

I'm not claiming that a six- or eight-pound trout is in the blast class with a 15- or 20-pound peacock, but the ripper can push the same button. Revved-up fish really unload.

My long-ago Penascal Point trout illustrated this. The fish (or possibly another) came back and ate with a vengeance after I pulled the plug away. In my experience, fresh and salt, you get a lot of determined grabs on slush baits.
This probably translates into a greater percentage of solidly hooked fish. No way to prove this but it sounds good.

As a final tweak in favor of the slush bait, you can rig a small trailer such as a streamer fly or unweighted plastic to run behind the plug (especially effective on surface schooling fish). Tie a two-foot length of 20- to 30-pound monofilament or fluorocarbon to the eye of the rear treble; use the heavy stiffer line so it will lay out smoothly during the cast. A light trailer line can repeatedly twist and tangle in the hook and prop.

A side-arm lob helps open the arc during the cast. It's similar to heaving a rattling cork rig. Or, dare I say it in the company of plugging purists, a live shrimp under a popping cork.

The trailer rig works behind a slush bait because it does not impede the straight yank. Using this double dip with a dogwalker is difficult; the drag of the trailer bogs down the coordinated action.

The old salts of decades past knew the advantages and applications of slush baits. I'm not suggesting that you stow all of your dogwalkers; rather, add a few slush baits to your coastal arsenal and rip some spray as a counterpoint to the zig and the zag.

You can try an oldie such as the Heddon Baby Torpedo or something newer such as the L&S MirrO Prop. Or whatever else you can locate.

The biggest problem might be finding a good selection of slush baits on the saltwater shelves of the nearest tackle emporium. Well, I have a suggestion: Go look in the bass aisles.