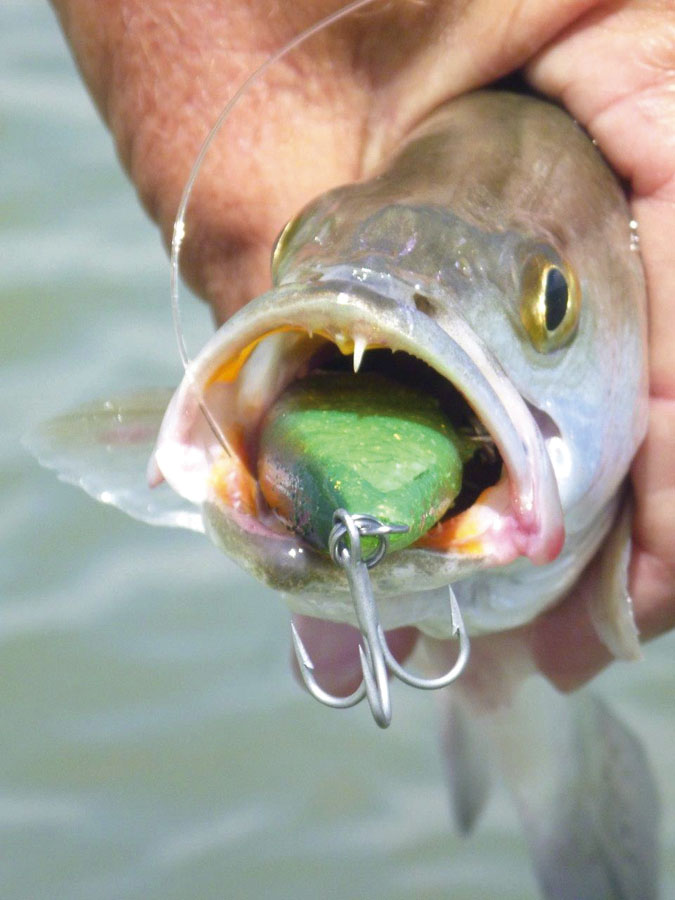 New Soft-Dine plug twitched over grass obviously appeals to even small school trout.
A clean pothole punctuated the dark grass flat ahead. Beyond the wind-riffled flat stretched the solitude of the salt-blasted King Ranch shoreline north of Port Mansfield. This was fishing country, as wild and vital as it's ever been.

I shuffled through the thigh-deep water, angling with the southeast wind to set up the easy cast with a 1/2-ounce spoon.

The light rod flexed and the casting reel hummed. I thumbed the braid and the glittering Sprite dropped with a clean slice just beyond the choppy blur of white bottom.
I held the rod tip at a 45 and cranked fast, hustling the retrieve to keep the spoon jiving a foot or so beneath the surface. The rod bent against a sudden pull and a quick swirl. Redfish!

The line angled across the flat, plucking several times at stringing tendrils of grass. I glanced to the low beach. A lone coyote padded along the jumbled rim of dried seaweed and driftwood, searching for something.

The run stopped and I gathering about half the line before the fish was off again. The redfish struggled for several minutes, working in a wide circle. I turned to follow; sliding each foot in the "stingray shuffle," then reached for the fluorocarbon leader and grabbed the coppery shoulder. It was a typical Laguna Madre red, maybe 24 or 25 inches.

O.K., maybe 23; it seemed bigger off the rod. I popped the hook free and watched the fish scoot away.

The incident earlier this summer was a flashback to my first trip to Port Mansfield during September of 1972. I was a rookie outdoor writer at the Houston Chronicle and thrilled to be included in a "press junket" to Mansfield. Back then, the tiny port was sort of off the map.

Several Big Names were among the group Byron Dalrymple of Kerrville, Russell Tinsley of Austin, and John Thompson of Ft. Worth. We had good fishing, although unregulated commercial nets and trotlines were taking a heavy toll on the shallow Laguna Madre. I vividly recall wading a clean King Ranch flat and catching several redfish. I was using a gold spoon, mainly because I lacked confidence in topwater plugs and nobody back then knew what a "Tout Tail" was.

There was an uncluttered thrill about the experience. You felt as if you had gotten someplace special and done something significant. That feeling remains the same.

The grass beds, the remote shorelines, the solid strikes they're all still there. But reaching them can be a lot easier now.

After releasing the redfish, I turned to watch a flurry of commotion about 50 yards away. Mike Sutton was under a bent rod. I shuffled close as he clamped a Boga-Grip and released a fish similar to mine.

Sutton, of Houston, is the new owner of Get-A-Way Adventures Lodge in Port Mansfield. He bought the operation (located in the harbor at 1000 West Port; www.getawayadventureslodge.com) about a year ago and has done extensive remodeling and upgrading.

The two-story lodge is comfortable and well-run, managed by Sandra Garza and hosted by Robert Wilson. It's constructed around a loft concept, with spacious double rooms on the upper deck looking over a rail to the lounge and bar area below. Clean wood abounds, tasteful and rustic, although the walls probably could use a few more of the obligatory Cowan prints.

All-in-all, Get-A-Way provides a fresh full-service option to fishing trips to Port Mansfield. The lodge can sleep 22 and a core group of eight guides stands ready, with others available if needed.

Significantly, Sutton is an avid angler and stresses the classic shallow water plugging for speckled trout and redfish. South Texas combination fishing/dove hunting and fishing/duck hunting trips are offered during the fall. Limited offshore trips are available and, worth note, good water is within sight of land.

Sutton, David Sikes, and I were guided by Mitch Richmond. The veteran Mansfield guide knows his water; we made five stops during the eight-hour day and caught fish in four of them. Most, admittedly, were small trout but you never know when green tide, splashing bait, and Lady Luck can come together along a Laguna Madre shoreline.

On that note, Sikes, the outdoor writer for the Corpus Christi Caller-Times, knows his stuff. On our first stop, just as the sun was topping the Gulf billows, we fanned out, chunking the coin-of-the-realm dogwalkers.

Sikes was laying out the long smooth casts that are the salty signature of the player. And, about 30 minutes into our wade, he had a major blow-up on a Bomber Badonk-A-Donk. He brought to hand a gorgeous 27-inch trout that weighed 6 1/2 pounds. The gleaming silvers and greens and lavenders of the spotted sow in the morning light underscored the entire experience.

Sadly, Sikes' blaze of topwater glory was a bit of a fluke. We flailed the flat for another hour and failed to raise another significant fish.

We ran to another stretch of shoreline and bailed from the boat. Guide Richmond stuck with a dogwalker but Sutton and Sikes switched to tails. I slid in between with a slow-sinking plug.

I knotted on a Soft-Dine, a relatively new soft-plastic collaboration between MirrOlure and Paul Brown (you know, of "Corky" fame). It's a spinoff of the small MirrOdine suspending plug, a baitfish-type offering with two sets of trebles and a stainless split ring in the nose.
The compact Soft-Dine casts well and it's designed to be fished stop-and-go just under the surface. A fairly slow retrieve is best another reason for the selection.

I was using an old Shakespeare President 1970A reel. By "old," I mean it was manufactured (according to the "FH" letter coding on the green aluminum side plate) in 1953. The direct-drive reel has no free-spool, no anti-reverse, no internal drag none of the modern components.

The old reel has a pitiful retrieve ratio, maybe 3-to-1, excruciatingly slow compared to a fast-lane 7- to-1 ripper. But the slow crank mates well with the suspending twitch plug.

Why the old thumb-buster reel? I guess I just like looking back. Angling has tradition. And the old top-shelf reels have clean style, a basic simplicity. They give a main-line contact lost amid all the "latest and greatest" gears and bearings and washers.

A well-oiled direct-drive reel on a light-action graphite rod can cast plenty far enough and I enjoy watching the little handle knobs spin and blur as the lure arcs across the water. Most significant, using only your thumb when playing a decent fish gives a better appreciation of strength and stamina.

The Soft-Dine I chose had a black back with greenish/gold reflecting sides. I turned it in my fingers, measuring it against the light and water, and knew it was a winner. At least a dozen trout within the next two hours agreed.

Several tried to swallow the plug. To repeat, most were "schoolies" but it's hard to argue with wading into action. In truth, Sikes and Sutton caught more specks with the jiving tails but I was fishing the way I wanted to fish.
We quit at 3 p.m. I figure our group of four caught at least 60 or 70 trout and eight or 10 reds. Sikes' 27-inch sow was the only trout of note but we spent plenty of time under bent rods. We had a solid day.

Richmond cut to the east to avoid the afternoon chops and we breezed back to Mansfield. Several other boats, mostly shallow-draft hulls, were converging on the harbor entrance. Fishing traffic continues to increase at the small port.

And we were there on a Monday; summer weekends are much worse. Much of the pressure typically comes from Corpus, Houston and San Antonio, but the economic upswing in South Texas during recent years has spawned additional traffic on the single artery of Texas Highway 186.

But determined anglers willing to avoid the high-profile areas certainly can find plenty of open water in the lower Laguna Madre complex. Mansfield remains surrounded by vast expanses of native Texas, a special fishing destination where deer herds amid the shade mottes outnumber boat trailers at the launch ramps (if you've been there, you know exactly what I'm talking about).
But now, as always, trailering a rig from anywhere north of Corpus can be a major hassle. You've got to really want to go there.

This is where Sutton's Get-A-Way Adventures Lodge starts looking good. We idled through the harbor and up to the private dock, unloaded our gear, and walked past the groomed swimming pool to the main lodge.
The transfer from salty wading boots to hot showers and cool drinks doesn't get much smoother – at Port Mansfield or most anywhere else.