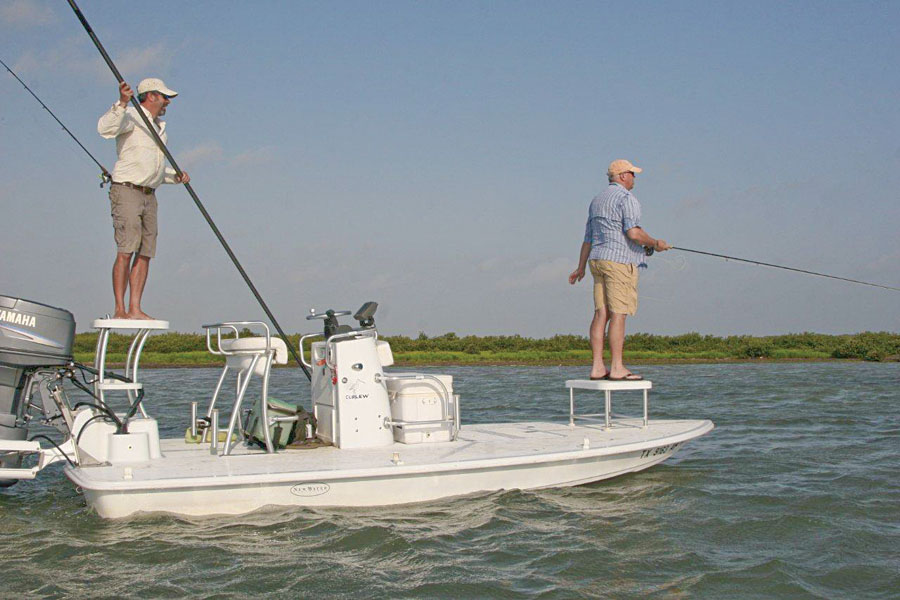 The first segment of this three-part series on the evolution of inshore light-tackle fishing in Texas ran in the May issue of Texas Saltwater Fishing. It dealt with the "red reel" and fiberglass rod era between the early '60s and the mid '70s.

The June installment detailed the dramatic years between the late '70s and the early '90s, probably the most significant period in the history of Lone Star plugging. Many changes occurred, from the introduction of graphite rods and low-profile reels to the conservation movements and legislative mandates that turned the tides for the future of redfish and speckled trout on the Gulf Coast.

This final segment takes us through the golden era of the '90s and into the future. And, because of the dedication of the anglers and conservationists who went before, it is a bright future for inshore fishing in Texas. This is a fine time to tote a light rod and reel to the tide line.

Populations of reds and specks are good in all the primary bay systems, based on the annual net surveys conducted by the Texas Parks and Wildlife Department. This positive trend is a direct result of the tight sport limits and commercial bans imposed during the tumultuous '80s, and a generally favorable nod from Old Man Winter and Lady Luck since the last hard-hitting freeze during the winter of '89.

He was using a Corky, one of the new, super-hot slow-sinking, soft-plastic plugs designed and marketed by Paul Brown of Houston/Friendswood. Nor was the fish a fluke. During the same wade, Ed Stephens strung a 12-4 and Ronnie Sellers caught an 11-plus. These were among several giant trout hooked that day, all on Corky plugs.

Wallace's speck broke the previous record of 13-9, set by Mike Blackwood of Corpus in 1975. Not coincidentally, Blackwood was wading Baffin and chunking a mullet-imitation plug. There's a pattern there not lost on hard-core pluggers. Wading a flat or shoreline south of Corpus remains the percentage shot for a "sure 'nuff" trophy trout - and the first quarter of the year usually is prime time.

One of the great regrets of my coastal career was failing to make a run to Baffin the week following Wallace's fish. Houston Chronicle colleague Doug Pike lined up a hurried half-day afternoon session with Corpus guide and Baffin veteran Cliff Webb; the plan was to leave Houston during the early morning and rendezvous at noon.

Conditions were awful when Pike called the night before, cool and windy, splatters of rain, and I blew it off. Plus I had a date that night.

Pike went solo, hard-charging through the marginal conditions. The foggy afternoon slicked off and Webb and Pike drifted a flat and caught and released approximately a dozen trophy trout, mostly on dogwalker-type topwater plugs. The best, as bitter memory serves, was Pike's 32 1/2 incher estimated at 12-plus pounds.

I'm not doubting the call; I saw the photos. And my "hot date" wasn't all that great; in truth, sadly, that was her estimation of the evening.

Misguided social sorties aside, many wonderful trout were caught during the early- and mid-90s. A friend of mine, J.D. Batten of Corpus, was a big-trout specialist who waded under the radar but caught numerous double-digit specks to 12-plus. He mainly used elongated, un-weighted soft plastics and hand-tweaked Rebel Jumpin' Minnow topwater plugs. He seldom ranged beyond knee- to thigh-deep water.

Truly, we had a golden era "down south," then the top-end results started dwindling. The odd monster continues to be caught, for sure, but the consistent numbers of double-digit specks slacked off during the past 10 or 12 years.

Fishing pressure certainly was a factor. The '90s saw a major increase in boat traffic in the skinny water where the big trout roam and the redfish "tail." The armadas of Texas shallow-draft scooters were joined by flotillas of Florida-style skiffs. Paddle-powered kayaks tricked for fishing increased dramatically and opened many back "lakes" and estuaries.

All of these hulls are capable of fishing in mere inches of water; shallow fish previously insulated from V-bottomed center consoles and vulnerable mainly to determined waders literally had no place to hide. Aquatic bottom vegetation took a beating from the increase in high-powered traffic, so much so that several seagrass-friendly "no motor" areas were established by TPWD.

And shallow-water anglers were becoming increasingly efficient. Sophisticated approaches (push poles, quiet troll motors, drift anchors, etc.) with specialized lures and lighter tackle increased the effectiveness of close-quarters encounters. Fly fishing really took off along the middle and lower coast during the '90s, with most of the double-haul efforts aimed at visible redfish.

And, in deeper bays, the increasing use of live croakers became a highly controversial issue. It's no secret that larger speckled trout feed heavily on baitfish, and a croaker can be a deadly choice when targeting specks topping, say, 22 inches.

This especially is true over defined structure, such as the "rock piles" (fossilized worm mounds) in Baffin Bay. The clumps of rocks concentrate bait and fish, and savvy guides and salty civilians took heavy tolls of trout in the mid-20-inch class. Most of these "near trophy" trout were boxed and the drain surely hurt top-end potential.

A bay - any bay - can only produce so many big specks. You've got to let them grow. Keep the smaller ones for fillets but release most of the mid-20s. Some anglers did; many did not. After all, the statewide daily limit was 10 trout, minimum length of 15 inches. No maximum length limit was imposed.

Those regulations were issued following the killer freeze of '89.

For years, I supported protection for larger speckled trout. In my Houston Chronicle column on Aug. 14, 1988, I wrote: "As the limit reads, a 10-pound trout is worth no more than a 14-inch trout (minimum legal length prior to '89). Nor is a 14 pounder. That is wrong. Even if the bag limit remains at 10, no more than two trout longer than, say, 25 inches should be allowed per day."

I tried again on June 23, 1993: "The longer I fish the coast the more convinced I become that we need regulation on the take of larger speckled trout. A total ban is not necessary, but some sort of cap such as one or two fish per day over a maximum size, say 24 inches, is required. That would permit the retention of a contest fish, or a trophy catch, while ensuring protection for most of the quality-sized fish."

While I'm honking my own horn on the issue of coastal conservation, I'd like the record to show that as early as April 7, 1974, I concluded in a soap-box rant in my Chronicle column: "I would be perfectly willing to keep 10 trout, like black bass, if other sport fishermen would comply and the (commercial) nets were controlled, especially during spawning seasons."

Keep in mind this was three years before the founding of the Gulf Coast Conservation Association, back when no laws whatsoever were in effect regulating the commercial and sport catch of speckled trout and red drum.

I was there and I was right and "they" (whoever that might be) were wrong. History proved me correct.

Finally, in 2002 the Texas Parks and Wildlife Commission adopted a regulation limiting anglers to one speckled trout measuring 25 inches or more on the 10-fish limit daily limit. The new laws also prohibited licensed fishing guides from keeping specks and reds when fishing with clients.

In 2007, the daily bag limit on trout was cut from 10 to five along the lower coast south of Marker 21 in the Land Cut. The push to place the entire Texas coast under the five-trout daily limit continues to gather support, and I'm inclined to favor the concept. Meat hauls are a thing of the past; so, also, are frost-burned baggies of forgotten fillets in the back of the freezer.

Take what you need for immediate needs and return the rest to the troubled old Gulf; a bounty of 10 fresh fillets from five "keeper" trout should be sufficient.

I'm convinced that tightening the limits will continue to improve trout potential all along the coast. Look at the fabulous success story of redfish during the past 30 years. The three-fish slot limit (20-to-28 inches) was a huge supercharger, an unparalleled turnaround that put Texas at the top of the finfish conservation movement. Overall fishing for reds probably is better now than at any time since the early '60s. At least, that is my impression.

This is not by accident, especially in the face of heavy fishing pressure. It's because most Texas anglers respect the tight limits.

Catch-and-release was virtually unheard of on specks and reds during the '60s and early '70, but it has become SOP during the modern era. Fly fishing played a significant role in this attitude adjustment. This is not to say that the average level-wind plugger does not appreciate opening his hands on a fine trout or red - but the long rodders really embraced the concept.

After all, catch-and-release had been accepted for decades on cold-water trout streams, not to mention the saltwater flats of South Florida where fly anglers first targeted coveted species such as tarpon, permit and bonefish. Joe Brooks, the great flats pioneer, once wrote, "I'd sooner eat a relative as a bonefish." Such was his respect for his quarry and his sport.

And such is the respect among many Texas fly anglers specializing in sight casting to redfish and big trout. Let's be realistic: Both species are delicious but the smaller ones are superior on the table. The sensible catch-and-release angler can box several low-end fish and release anything with real shoulders.

This was the thinking of Carl "Bud" Rowland of McAllen when, on May 23, 2002, he sight-cast with a fly rod to a huge sow trout in the lower Laguna Madre. The fish was released, perhaps raising a few questions, but at least one on-site photo shows a mondo-giant house-wrecker sow - a no-question giant beyond the conceptual limits of the average angler.

Rowland's speckled trout was recognized under catch-and-release guidelines by TPWD as the state record. The official statistics: 37 1/4 inches and 15.60 pounds.

I must confess, I wish he had kept the fish as irrefutable proof of the top-end quality of spotted seatrout on the Texas coast. Southeastern Florida is not the only venue capable of producing world-class specks.

And, no doubt, fly fishing is an excellent method for targeting shallow reds and trout. Returns from the middle and lower coast during the past 20 years prove the effectiveness of an 8-weight rod, a floating line and a mullet-imitation fly.

My longest speck, which taped 31 1/2 inches, was caught on a Seaducer streamer fly while sight casting on a Laguna Madre grass flat during the late '90s. The proper fly rod is a great addition to any coastal angler's quiver, but plugging remains the core of the experience.

Plugging is a beautiful blend of power and finesse that evolved along the Texas coast. It is our school of fishing. It has been since the introduction of modern rods, reels and lines following World War II and, with refined equipment, plugging will continue to dominate the Texas tides.

I've attempted in this three-part series to trace the origins and impact of plugging during a span of almost 50 years. Mine was a sketchy effort based on personal experiences and "insider" information during my 35 years as an outdoor writer for the Houston Chronicle, but I hope it gives new anglers a sense of history and a feeling of pride.

The outstanding inshore fishing we enjoy today is no accident. The free-wheeling, lure-chunking pluggers took it from the brink and, over several decades of controversy and commitment, made things happen for a positive future on the beautiful Texas coast.