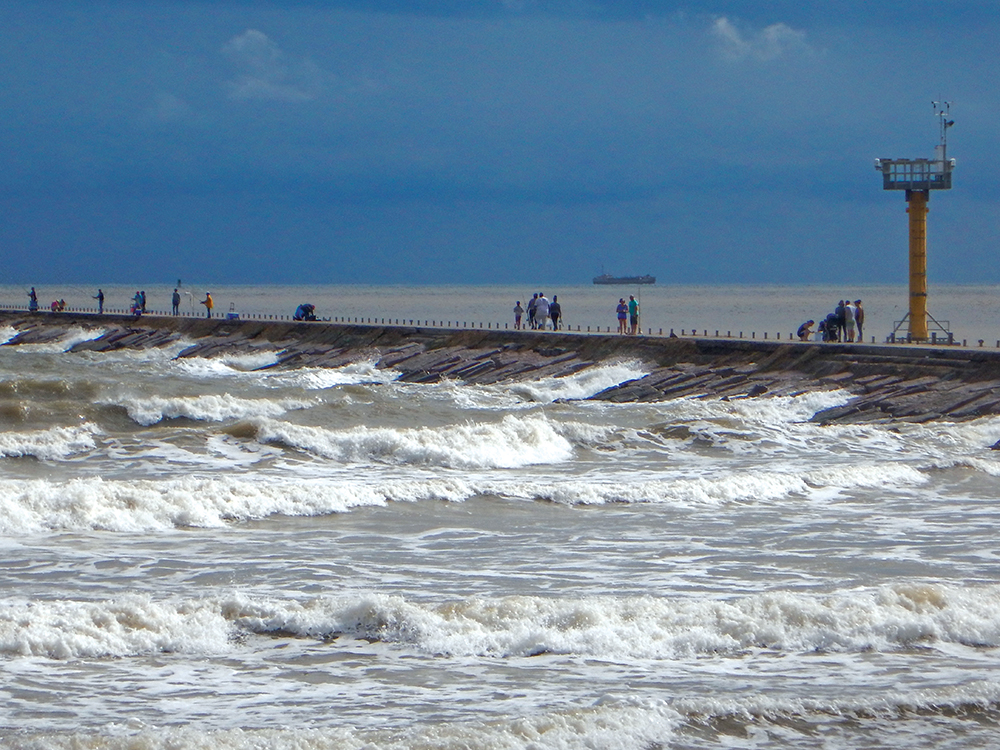 Rough surf might hide a rude awakening for jetty walkers returning to a parked vehicle marked by a calculating thief.

A thief is a low-life. Indoors or outdoors, makes no difference. And, outdoors, anglers can be particularly vulnerable to rip-offs.

I learned this sad reality at a young age. I was 11 or 12 and participating in a Saturday morning fishing tournament at the old Hermann Park Lake in Houston. It was a kids-only event, with small prizes given for participating.

The small lake had a boardwalk and a wooden rod rack along the south end. The youth event was staged on the boardwalk.

Several dozen kids were milling around at the conclusion of the event. I spied a small bluegill flopping in the sand. I placed my rod and reel in the rack and paced over and tossed the struggling sunfish back into the pond – my good deed for the day.

When I turned back, my rod and reel were gone.

It was a cheap rig, a no-name casting reel and a solid glass rod, but it was all I had. Summer vacation was beckoning and I was burning with the Fishing Fever. Measured on that scale, the loss was significant.

At least the theft provided a hard lesson – but one that apparently I did not heed too well. During the subsequent decades my unattended fishing vehicles have been victimized several times. The list of stolen items includes several rods and reels, a tackle box, a camera bag, a wallet, and a Smith & Wesson Model 66 revolver.

Oh, yes, and an almost-new Chevrolet K5 Blazer (incidentally the loss of the S&W and the SUV occurred on two separate occasions about one year apart).

These are significant items that come to mind. The list is longer.

The way I see it, thefts of fishing tackle and trip accessories fall into two categories: opportunistic and premeditated.

The spontaneous scoundrel sees an unguarded moment and strikes (as illustrated by my Hermann Park experience). Briefly unattended trailers with boats loaded with gear especially are vulnerable. Rigged-and-ready rods standing at attention in vertical holders are begging for a snatch during a pre-launch pit stop for ice or bait. So does the stop on way home, say, at a small restaurant.

Stopping for a lingering sit-down meal really puts parked equipment at risk. Most coastal cafes aren't much on manned security and, once all hands are inside and pawing over menus, opportunity for mischief is ripe. For this reason, the savvy crew should pick a "table with a view." At the very least, the vehicle should be parked out front and under good lighting. Nosing into the back corner of a poorly illuminated lot is a rookie mistake.

It takes only a few seconds for a determined thief to hop onto the trailer frame and pluck a visible rod or two. The burglary occurs before you have time to drop your napkin, much less get out the door. Worth note, a new top-end casting rod and reel might cost $500 or $600. A comparable 8-weight fly outfit might be worth twice that (it's ridiculous what they get for big name rods and reels these days).

Even an old well-worn rod is worth something, most certainly if it has the sentimental value of reliable service over years of green tides. It doesn't belong in the greedy hands of a crook.

Stowing all rods in locked compartments (or at least out of casual sight) is a wise precaution but I suspect many of us have been guilty of lapses, of leaving valuable gear within view of prowling eyes.

The opportunistic theft usually is the work of an amateur, maybe even a kid on a bicycle – a kid that no doubt could benefit from a bit more parental guidance on where to pedal the bike.

The premeditated theft is the worst. For example, waders and jetty walkers and pier anglers are vulnerable to the planning of an experienced parking-lot prowler.

The stealthy looter sits and watches, scouting all available vehicles based on the likelihood of "low-hanging fruit." For this reason, a rusted, dented, dirty junker might be spared by default. That shiny new extended cab rig parked right over there looks like a much better target for a big score.

That's the upside to driving an old beater to the beach; the downside is, it might break down.

Regardless of conveyance, once the preoccupied owner walks away the pro can monitor movements to insure the coast – literally – is clear. He waits until the occupants are well and truly removed, unable to abruptly return.

For example, several jetty walkers pulling a tackle wagon and toting sun umbrellas are planning on a long vigil, and probably out near the end of the long rocks. The practiced burglar calculating the odds considers these things.

The break-in artist is brazen, striding with a confident air to the target vehicle. He looks respectable, dressed accordingly, and random passersby pay no attention. It's nobody's concern if a stranger appears to be fumbling for keys.

A thief equipped with specialized tools can breach a vehicle door within moments and with no big drama even if an alarm is triggered. They often go off in crowded parking areas, usually by legitimate owners mishandling “remote” keys. Mainly, people wish the damned beeping or honking will stop.

Valuables at risk usually are not fishing accessories, rather personal items such as wallets, purses, smart phones, tote bags and handguns (as we know, vehicles in Texas often are armed). The "wet" wader almost certainly has left behind keys and credentials – and a proper thief can quickly rifle through the typical hiding places.

Or, if time and opportunity are on his side, he might drive off with the whole rig.

Of course, these are worst-case situations. Most times, the great majority of times, nothing happens. This can be true even following absurd lapses in awareness and security.

For example, about 10 years ago on a "green to the beach" afternoon a friend and I drove my Tahoe to the Surfside Jetty County Park near Freeport. The well-maintained parking lot was crowded but I found an empty space about 50 yards from the granite breakwater.

I opened the rear hatch and we grabbed our rods and rock-walking accessories – and I left the hatch raised with the key dangling from the lock. Inside the truck, plainly visible, were two backup casting rods. Also available for "easy pickings" were several tote bags, a pair of binoculars and our cell phones. Oh yes, and a holstered Walther PPK in the console.

We scurried toward the jetty, gabbling like a pair of geese about all the speckled trout and Spanish mackerel we were going to catch. We returned to the busy lot about two hours later and I was horrified, absolutely aghast, to see the open hatch and dangling key.

Nothing was missing. Not one item. And surely during our absence several dozen people walked by the rear of the truck.

I do believe that, for the most part, anglers are good and honest individuals. Crooks are a part of tide-line society but I'm willing to bet that the next outdoor thief is not a fisherman; he is a low-life predator who recognizes a target-rich environment and understands the unprotected situations in which anglers often leave their gear.

Pay attention, think ahead, and don't make things easier for him by being a chump.