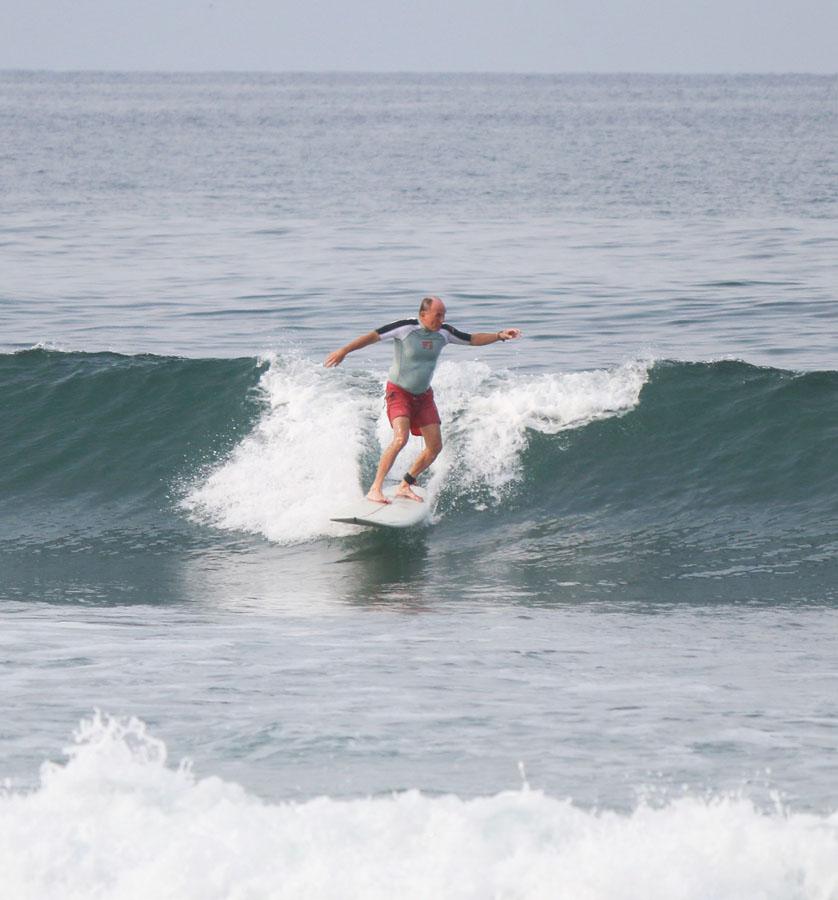 Doggett winds up for a longboard turn while researching waves and tides last month in Mexico. At age 68, he remains in the Geezer Division of surfing.

The summer surf is an accessible wading option for able-bodied anglers all along the Texas coast. And, when it's right, this beachfront fishing is a satisfying and exhilarating experience.

You are on your own, one-on-one with the elements, and the solid strike at the end of a long cast, with nothing out front but surging green, can be addictive.

But it's also dangerous. Each year, surf waders get into trouble. And, occasionally, somebody drowns. Significantly, the roll call of casualties includes old salts, experienced waders who figured they had it covered.

I've been wading the surf for 50 years, starting in high school. And, relevant to this discussion, I've been surfing for 50 years. By "surfing," I mean riding waves up and down the Texas coast, as well as venues such as Hawaii, Fiji, Costa Rica, California and Mexico.

Just last month, I was on a week-long surfing trip with several friends to Punta de Mita, north of Puerto Vallarta.

I've never been particularly good at surfing just stoked. I'm certainly no stranger to wiping out. Based on considerable practice in going through the rinse cycle ("It was my board's fault!"), I believe I have a reasonable understanding of waves and currents.

Here are several observations gleaned from this soggy cross-pollination that might help spare a drama for the beachfront wader during a rough-water session:

First, the surf is always bigger than it looks from the beach. "Big" is a relative concept but the view from dry sand can be treacherous. If it looks rough as you are rigging tackle by the parked vehicle, I can promise you that the breaking waves out on the third bar will be an issue.

The prudent move is to remain on the second bar, where the reforming waves are smaller in the shallower water. No question, that is the wise choice–but gung-ho surf waders have a tendency to push the limits. You see birds working or rods bending, or maybe super-green water is hugging the outside bar. So you start hopping or stroking to get out there. The temptation is huge, especially if you are dragging an empty stringer.

And, worth note, when the wind and swells are from the prevailing southeast, green water with fishable clarity can hold in rough surf–prime conditions for summer species such as specks and mackerel. The turbulence provides "cover" and ignites the predators.

For the surf wader, an honest three-foot wave on the outside bar can be dangerous. This is too much water for safe fishing. Keep in mind that if you are shuffling along in waist-deep water an incoming three footer can be at eyeball level. And you are standing right in the impact zone, where the bottom is shallowest and the waves hit hardest.

The larger waves on a given day almost always travel in "sets." A set, or pulse, typically is comprised of several waves, one following the next, each arriving at a parallel angle to the open beach.

The interval between waves in a set depends on the fetch across open water. The typical surf along the Gulf Coast is a wind swell created by localized onshore wind; it is a close-packed swell with a short period of maybe six or seven seconds between each wave. That's not much time to regroup between bashings.

A ground swell is generated by a distant storm, for example, a tropical disturbance in the lower Gulf. A ground swell has nothing to do with localized wind; indeed, conditions might be dead calm on the beach as a thumping overhead swell shows in the dawning light. The period between ground swell waves might be 10 or 12 seconds (even longer across the open vaults of a major ocean).

The time between the major sets varies depending on the energy source, but sets typically arrive every few minutes. This is not to say that the surf is flat between sets–just not as rough. Just remember that it's not a uniform procession of whitewater, and that larger pulses can occur.

This especially is true about midway through an incoming tide–not coincidentally the prime time to be plugging the surf. The tidal push encourages bait and fish to move close but it adds more punch to the waves.

The wader easing into a green tide with manageable two-foot surf on the outside bar can minimize the poundings by paying attention as each significant wave approaches. The unbroken wave typically forms in a line, rising to curl and topple as it reaches the shelving bar.

But, often, a flatter section will show. By shuffling a few feet right or left, the savvy wader might be able to position for this softer section. By pushing forward and turning sideways, minimizing resistance, it's easy to cleave the weak hump as it passes. Well, most of the time.

Whether to advance or retreat is a judgment call. Moving forward into slightly deeper water may allow you to bounce over the lifting swell. But this aggressive tactic can be a sketchy call with a "sure 'nuff" larger wave. If you misjudge the timing and the breaking wave catches you in mid-hop, the impact can slam you into el wipeout grande. It is astonishing how much power even a three-foot wave has when it smacks you dead-center.

Backing up and planting your feet might reduce the impact but it positions you near the inshore edge of the bar. And, worth note, the inshore edge has the sharpest drop-off. If you get blasted off your feet and swept back, you may find yourself flailing in the deeper water of the gut.

Incidentally, while all this is going on, I hope you had the foresight to dress lightly and don a flotation vest and button or zip all pockets and pouches. A hat festooned with crusty lures looks salty but this is not the time to be wearing it. Save the bonnet with all the barbed frills upon it for calm days of feeble rollers.

Lures with single hooks such as jigs and spoons are the safest to work with amid rough conditions. Of course, you and I both know that mullet-imitation plugs with multiple sets of dangling trebles are excellent on big specks; so, no matter if you opt for an old school favorite such as a MirrOlure 52M or a new "killer bait" such as a Bagley Rattlin' Finger Mullet, be especially cautious when attempting to grab or unhook a slippery, thrashing fish.

A good trout has a tendency to fight near the surface, working in a circle around the wader. As the gleaming prize draws close, the normal reaction is to shuffle as shallow as possible and to turn your back to the incoming waves. Watch out–this is an excellent way to get blindsided.

Whether you get blasted off the bar or opt for a calculated retreat, you may be forced to swim a few strokes. The parallel gut between the second and third bars might have been shoulder deep as you bobbled out against the rising sun, but several hours of strong incoming tide may increase the depth by a foot or more.

Unless you are a relative of Dwight Howard or Yao Ming, the bottom is nowhere to be found.

Aren't you glad you remembered to wear that flotation vest? Oh, you forgot.

Well, start side-stroking for the beach, keeping your head and rod hand above water, and remain encouraged by the fact that you probably won't have to swim far to reach stand-up bottom again. This is assuming you didn't blunder off the edge of a free-running pass.

Wading or swimming, try to stay in the recurring washes of whitewater. The rolling foam helps push you towards the beach; use that energy to work for, not against, your progress. The whitewater also serves as a road map by defining shallow bottom. If the foam dissipates into abrupt green, a "hat floater" hole or channel almost certainly waits ahead.

A nasty side-shore current might be running. The current is caused by the tide (especially near a major pass) and by wind and wave action. All that incoming energy has to go somewhere and, typically, it funnels parallel to the beach. For the inbound swimmer, a southerly wind/swell runs left-to-right, and an easterly angle moves right-to-left.

A bit of lateral drift is no big deal as long as you keep stroking calmly for the dry sand. And, you lucky rascal, if you are towing a limit of wallowing specks, try not to think about roaming bull sharks drawn close by all that incoming water. Seriously, stay loose and keep angling across the flow for the beach. It's right there, not that far, so don't panic if you gulp a breaking wave or a frantic toe fails to touch.

Rip currents running straight out into the Gulf are unusual along the flat, open Texas beaches (but occur often along irregular or steep coastlines). Texas rips are most common tight against piers and jetties because these perpendicular structures redirect the normal lateral flow.

A pier/jetty rip can be dangerous for the uncertain wader-turned-swimmer because it runs with accelerated force into deeper water. A trench often is gouged by the powerful flow–not what you want, either. If you are carried into a no-nonsense rip, use your whitewater road map and try to stroke across the outgoing river to the nearest sandbar. And hope somebody with qualifications spots your plight.

Rip or no rip, if the situation starts looking desperate, consider tossing the rod and reel to free both arms for serious stroking (although I must say that in 50 years I've never seen anybody abandon precious tackle in mid-swim, which must be a grand endorsement for companies such as Shimano and Waterloo).

And, after you reach the beach, you might dust off that old Junior Woodchuck swimming badge you earned at long-ago summer camp. Keep playing in the uncaring and unforgiving surf, lured again and again by the beckon of the outside bar, and you'll probably need it.