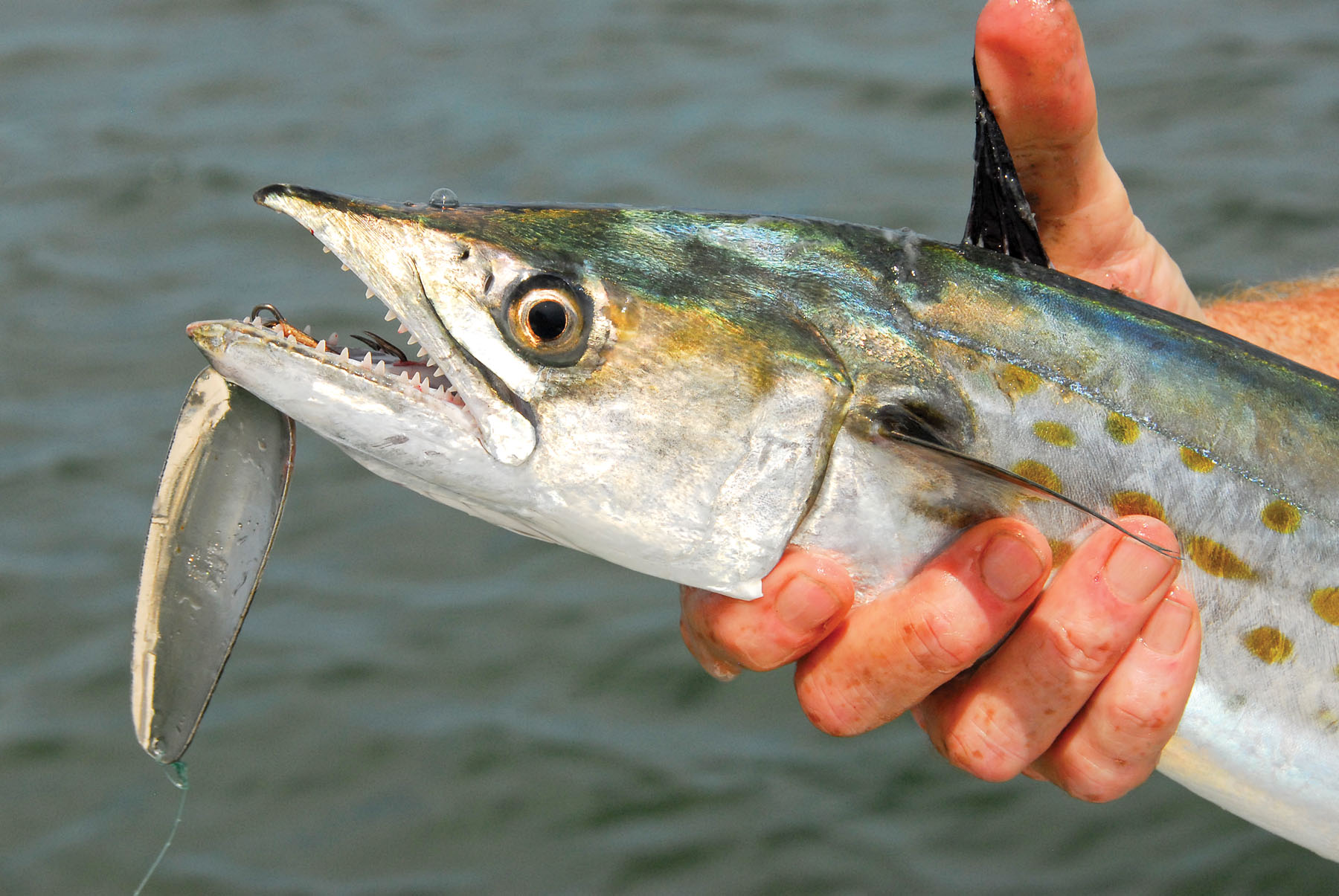 We were anchored on a green July tide near the end of Galveston's South Jetty. We were "free shrimping" - casting live shrimp against the rocks and allowing the current to carry the settling baits across the submerged slope.

Fishing was steady; Ken Frazier, my old fishing friend, knows the rocks. A school of speckled trout milled within reach and we kept the "bite" active by tossing an occasional handful of free baits.

We were working on a two-man limit of specks, nothing exceptional size-wise, but all solid keepers in the 2- to 3-pound class, excellent candidates for the fillet knives back at the Galveston Yacht Basin.

I stuck the point of a No. 8 gold treble under the "horn" of a kicking brownie and lobbed a careful side-arm cast across the breeze. The shrimp and tiny pinch of lead split shot landed with a soft plop and began to settle.

The 12-pound mono pulled tight against a vicious strike. No school trout, this time!

Line pulled from the loosely set drag and raced across the surface. A slender silvery two-foot fish flew out in a high and twisting leap.

"Skipjack!" Hooted Frazier. "Leave it to you to hook a B-Teamer when we're in a hot school of trout!"

I scrambled around the bow, keeping at right angles to the running, jumping skipjack. "Well, it may be a B-Teamer but it sure fights harder than any trout we've caught. Look at this guy go."

The skipjack dove under the boat. I plunged the rod tip, clearing the outboard, and played the fish out on the other side of the boat. I reached with the long-handled dip net and the thrashing mesh came aboard.

I plucked the small treble and released the fish; it flashed like a lance into the green.

The skipjack, or ladyfish, is one the second stringers on the Texas tides, falling short of the exclusive A-Team lineup of speckled trout, red drum, snook and tarpon. The B-Team species often fail to get the recognition they deserve.

When the coveted specks and reds fail to cooperate, the B Teamers can salvage the day. Or they can expand the potential. For example, when a limit of trout is on the stringer or in the box, deliberately targeting B-Teamers can add variety and excitement.

The idea is to keep an open mind; the tides do not totally revolve around specks and reds. We sometimes tend to forget that.

The skipjack is a good example. Few Texas anglers deliberately target them; in fact, many old salts hold the "skippers" in low regard. I'm not sure why, maybe because the table quality is poor. But edibility should not be the measure of a great sport fish - especially in these times of catch-and-release.

Frankly, edibility shouldn't even be a factor. Look at tarpon; nobody this side of a jungle rain forest eats tarpon.

And I believe that pound-for-pound a skipjack runs harder and jumps higher than a "baby" tarpon. The biggest knock against the ladyfish is size - or lack of it. Most are between one and two pounds, and anything topping an honest four or five is really big.

Regardless of size, the ladyfish is a fast-lane predator, usually running in wolfpack schools and most often encountered in the surf, or along jetties and in the currents of major passes. But they do range into the primary bays, usually near channels.

Down south, they mill across the white Laguna flats behind Padre Island; sight casting with a fly rod while wading on knee-deep sand is great sport.

The jaws are sandpaper rough and you need a 20- to 30-pound mono or fluoro shock leader if you expect to bring many to hand. This abrasive treatment on terminal tackle is another negative in the eyes of some fishermen - but you don't hear of many old salts griping about the rough jaws of snook.

None of it really makes sense to me. If skipjacks averaged 10 pounds rather than two, they surely would rank among the world's hottest light-tackle game fish. A decent ladyfish combines the runs of a bonefish with the jumps of a tarpon. If angling action is the aim, where do you go from there?

The Spanish mackerel is another B-Team fish on the warm-water tides. Some trout pros dislike mackerel but I think they are great - they are streamlined and dashing, with dark green backs and yellow spots. They hit going 100 miles per hour (or so it seems) and run fast and hard.

Well, there's the size issue again: Spanish mackerel average about two pounds. A three or four pounder is a good one.

But, if you think about it, the typical trout caught by chunk-and-chance (opposed to specifically targeting large sows) probably weighs between one and two pounds. Anything topping three is regarded as a "solid speck."

Many times, there's not much difference on the scale. And, like the trout, the Spanish mackerel is an exceptional food fish (when broiled with a light baste of olive oil, and salt, pepper, and lemon). I consider fresh Spanish mackerel vastly superior to the larger king mackerel.

Unlike the speck, the mackerel is ridiculously easy to clean. And it's a high-yield bounty, with a small head and a tiny body cavity. No scaling or skinning required; just lop off the head and either gut the fish whole or slice the fillets.

Spanish mackerel seldom are caught in the bays. Never say never in saltwater but a "Spanish" encounter inside the barrier islands is rare. They prefer the open Gulf, schooling on green tides within reach of surf waders and pier and jetty fishermen.

The calling card of aggressive mackerel often is a sharp strike followed by the abrupt slack of a cleanly sliced line. Mackerel have tiny teeth that can easily cut a normal casting line (especially when free shrimping with no buffer between the mono and the stubby treble hook).

They also are death on soft-plastic "tails," which may explain why many old salts are down on them. And, you might argue, mackerel don't jump after being hooked. Well, neither do redfish.

If mackerel are on the tide and you want some of the action, rig with a small spoon or nylon-strand jig and a short (four- to five-inch) wire leader. A fast retrieve near the surface is the percentage choice.

Some of my most-memorable sessions have occurred while "walking the rocks" of the long Gulf jetties and casting spoons as far out as possible. Mackerel prefer the open water away from the sloping granite blocks. As a plus for the jetty rat, the mackerel has a tough mouth; fish hooked in the jaw seldom pull off when being flipped onto the rocks.

But, wherever you find them, a few Spanish mackerel can dress up any stringer or dinner table.

The jack crevalle is another notable B-Team species. The jack is lousy food fish but has uncommon strength and exceptional size. Mature fish average between 15 and 25 pounds. Anything under 10 is small and anything topping 30 is really big.

Nothing wrong here on the scale; the second-string status simply might be because jackfish are too much.

You would think gung-ho anglers would chorus, "Or a fish that's too big!"

But many veteran trout pluggers curse the jackfish. Perhaps this negative reaction is based on another truism: "You don't bring a knife to a gunfight!"

The typical 12-pound casting outfit is pretty wimpy against a big blunt-headed jack with wild eyes and sweeping fins. You need more horsepower to set the hook and pressure the fish. This is no knock against the trout rod; it simply was not designed or intended for powerful fish weighing four or five times more than the average speck.

Yes, it's possible to catch a big jack on a trout rod - many veteran pluggers have done it even while wading - but you grow old in the process. The fight requires maybe a minute-per-pound, and this is assuming you stay after the fish and nothing breaks or blows up.

Jacks don't jump, but a big one has a screeching run. The light rod surges and line pours off the reel. No question - you're fast to something with real shoulders.

But following the first run the jack has a disheartening tendency to turn sideways. It puts the slab side against you, plodding methodically and "breathing" on the line with deliberate tail beats. This is when the trout rod loses major points. It bends into the handle and you have very little leverage "way out the there" on the broadside fish. This especially is true with stretchy mono.

When a stud jack crashes in and clamps on and heads south, the odds are good you will lose your costly Skitter Walk or 51M, or whatever mullet-looking dandy you were using to ply the tides for "speckled beauties." This helps explain the dour mood of some grizzled old salts.

But maybe they take things too seriously.

A school of marauders crashing through the surf or into a pass is a thrilling sight, and a hookup now and then adds juice to the day. I must confess I love seeing all the violent energy erupt from nowhere. The flying mullet and bombastic crashes get my plugging pulse pounding.

I can't stand it - screw the specks. I want to chunk into the leading edge of the melee. And if I lose a lure or break a leader, at least there's a fish story in there.

Yes, even gafftop catfish; the slime is awful, but they fight hard and long. You think you've got a good red until the thing waves its streamer fins and rolls to the surface.

No way the hardhead catfish or the stingray makes the cut.

But, for the angler who keeps an open mind and enjoys a bent rod (which is sort of the idea of the whole thing), a variety of trip-saving B-Teamers is available. And some of the best of this mixed-bag action occurs during late summer and early fall.

If you don't want 'em, make a hole and let me cast.