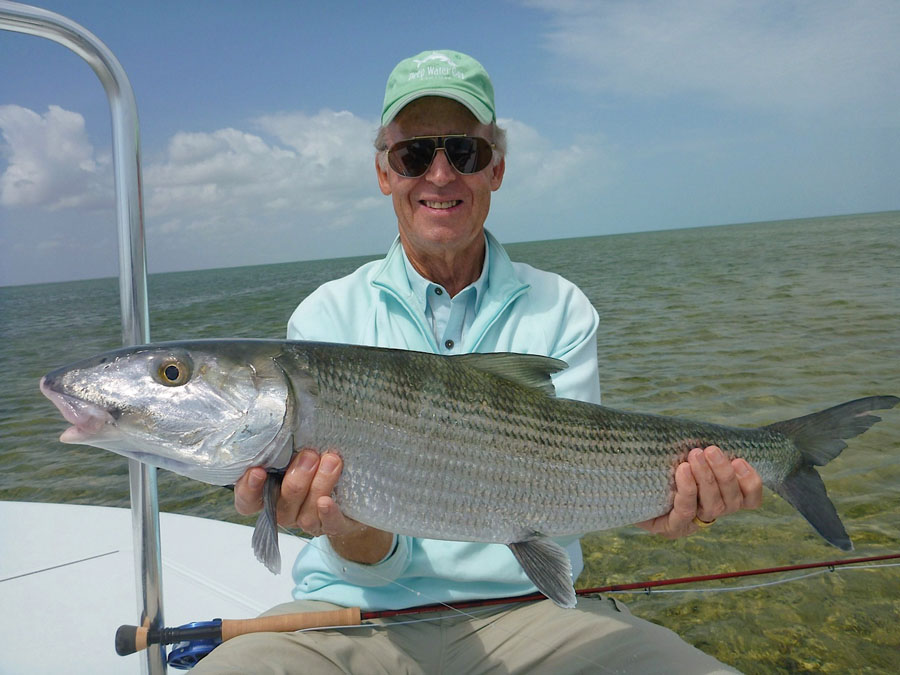 Jim Easterling of Houston prepares to release his world-class 14-pound bonefish caught recently at Deep Water Cay, Bahamas.
The dapper bartender at Deep Water Cay placed the gin and tonic on the counter. The tall glass looked great, lots of ice, a manly slug of Beefeater, and a jaunty wedge of fresh-sliced lemonjust the thing to toast the tides following a great final day on the flats.

I smiled and tipped the glass to the great Brooks, angler-to-angler, and took a sip of London's A-Team export.
Fishing partner Jim Easterling paced up. We made the five-day trip together from Houston during late March, each fishing three days with a guide. Fishing solo effectively doubles your potential when standing on the bow of a flats skiff and sight-casting.

Easterling, also, was smiling. "How was your day?" he asked.

"Not bad," I said, "Fifteen bonefish between three and seven pounds. All sight-casting. How about you."

"Well, I guess I beat you by one," I said, relishing another sip.

To put this in perspective, based on documented catches, a 14-pound bonefish is very similar to a 14-pound speckled trout. A hard-core angler could fish a lifetime for either species and never even come close to hooking a fish of such magnitude. An honest 12 would be off the chart. Most grizzled devotees, plug or fly, hope for a legitimate "double digit" 10 pounderand that's no guarantee.

Easterling was fishing with veteran guide Meko Glinton, and the 14 wasn't the whole story. "Meko spotted four bonefish cruising in about two feet of water. My fishand this is the truthwas only the second largest in the group. Meko guessed the lead fish to be close to 16, unbelievable.

"It was noticeably bigger than mine. I put a cast with a seven weight out in front and let the fly settle and the lead fish nosed it and turned away. Then my fish rushed up and grabbed it. It took almost 200 yards of backing and we had to crank the motor and follow itlike a tarpon."

I've made three trips to DWC, a small coral nub sporting a single lodge facility located just off the southeastern end of Grand Bahama Island; I believe it is the "Baffin Bay" for big bonefish. For whatever reasons, the flats in that general area have a history of producing XXL fish.

Of course, regardless of venue, the really big ones are not on every tide. As with Baffin, you might fish hard and not catch one butthey are there.

Assuming conditions are halfway favorable, you almost certainly will see some exceptional bonefish. I had a good 60-foot shot at one that looked 11 or 12 and landed a hair too close. The big fish didn't spook, it just sort of waddled away. To put the fish in perspective, veteran guide Mervin Thomas first thought it was a barracuda.

The following day, a huge silver tail popped up in a foot of water andwell, never mind.

And this is just not me talking. Yvon Chouinard, founder of Patagonia and a world-travelled flats fisherman, wrote recently in the DWC guest book, "I've never seen a place with such big bonefish."

The astute follower of flats fishing will contend that the middle and upper Florida Keys are the mother lode for battlewagon-class bonefish. This is true; the Keys have yielded most of the record-class fish (as documented by the International Game Fish Association). The Keys fish are exceptionally thick, with greater girth per length on average than Pacific bonefish.

The Grand Bahama/Deep Water Cay area is only about 100 miles from the upper Keys. The big fish boast similar football profilesmaybe not as plentiful but perhaps easier to catch.

There are two reasons for this: First, Florida is awash in shallow-draft recreational traffic and the bonefish are skittish and selective. Second, according the some marine biologists, the upper Keys fishery is not as healthy as it was, say, 30 years ago.

Conversely, the eastern end of Grand Bahama Island remains relatively unspoiled. And easy access to deep ocean water supports the big-fish theory, as jumbos can trade in and out with the tides.

Most important, fishing pressure is light. The dozen or so skiffs of Deep Water Cay are pretty much it when it comes to serious flats fishing. Put another way, in three days of fishing I did not see a single flats boat other than a distant few from our facilitytry that at Islamorada or Marathon.

Frankly, I believe the case can be made that the fishing at Deep Water Cay is better now than 30 years ago (my first of three trips was during the mid '80s). This is because the new Hell's Bay skiffs and big Yamaha four-stroke engines can cover more water, maximizing prime hours on the flats. Poling techniques and fishing tackle simply are better and a strong catch-and-release ethic is supported.

As a matter of fact, I was wading when that giant silver tail popped up andwell, never mind, again.

To repeat, double-digit bonefish are not common at DWC but neither are they total flukes. For the record, Easterling caught a 10 pounder the day before (in a different area). The 10 was his Personal Best, a mark that stood less than 24 hours.

The old Deep Water Cay Club was founded by Gil Drake in 1958. It went through several ownership changes (not to mention a fire) and was purchased again in 2010.

Paul Vahldiek, Jr., of Houston, is one of the new owners and he is committed to conserving the resource and upgrading the operation. "Upgrading the operation" means the place is Top Tier, as fine a flats fishing operation as you'll find anywhere. The quality extends from the lodging and meals to the staff and service andmost importantthe guides and skiffs. The guides are locals, most living in nearby McLean's Town. Most have 10 or 20 years of professional experience.

(The lodge specializes in the flats fishing but family-type outings are encouraged. Aquatic options include snorkeling, diving, kayaking, and low-key bait fishing or trolling on the nearby reefs. The facility can be booked on a per-day basis. For additional information, contact the lodge at www.deepwatercay.com).

According to Vahldiek, lodge manager Buzz Cox presented four more big-fish award pins during the month since Easterling's fish. To earn a pin, a fish must tape 30 inches to the "V" in the tail.

"A 12 1/2 was caught during my last trip," Vahldiek said. "Guides believe they have seen 18-pound fish. I once had one on that we thought was 14and it was one of the smaller fish in a school."

"The original Deep Water Cay was a private club and apparently they did not keep records on fish size, but the area has been known for years as producing big fish. Big permit, too."

I must admit that I've yet to land a double-digit bonefish at DWC. The only 10 I've brought to hand was years ago near Grassy Cay on the south end of Andros (another great venue but hard to access).

Of course, you don't need a huge bonefish to make a successful trip. My 15-fish day was a fine example. Guide William Pender and I worked the shallow shoreline of a cove and I was constantly casting to quality fish. Most were a bit either side of four pounds but I hooked at least two that might have been pushing eight. One just pulled off following a solid strip strike; the other took 75 yards of string and cut off amid coral rubble. Nobody ever said big bonefish were particularly easy.

But, all-in-all, it was a great day of sight casting. You have to put these things in perspective.

Come to think of it, I've never caught a double-digit trout from Baffin Bay. Two 9s and several 8s come to mind, but nothing heavier. My only verified 10-plus speck came years ago while wading in lower West Galveston Bay. That's fishing.

But a few special places have an undeniable big-fish aura; you've got to go back. That's also fishing.

Whether it's Baffin Bay or Deep Water Cay, you face the sparkling promise of each new day and know you are in the 10X circle for the fish of a lifetime.