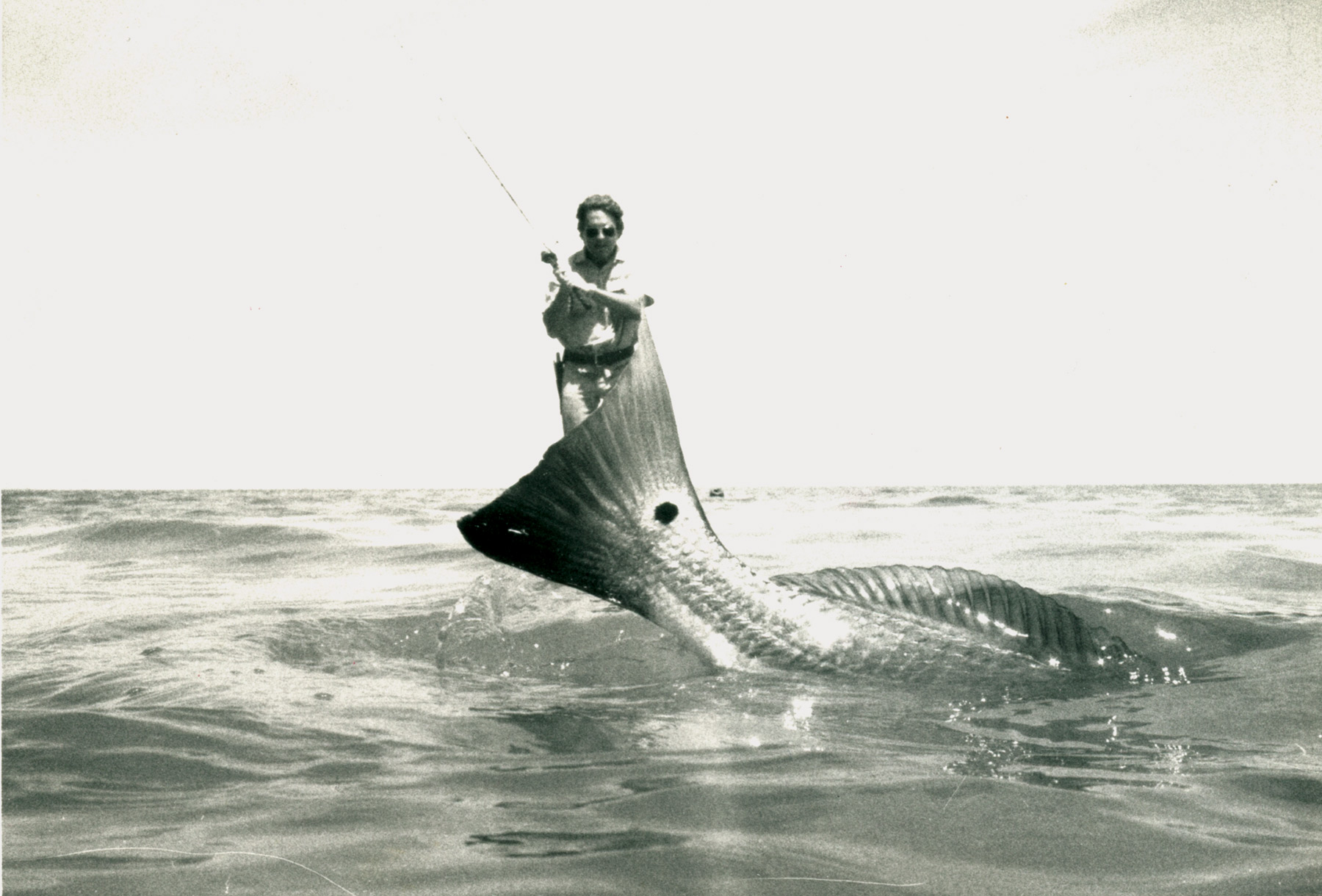 Editor's note: This is the second in a series of feature stories by Joe Doggett detailing significant contributions to the Texas outdoor experience.

The conservation of sport fish is widely accepted on today's tides but the concept is older than many anglers might realize.

Consider this advice written in '96: You must not be too greedy in catching your said fish as in taking too much at one time... That could easily be the occasion of destroying your own sport and other men's also.

Sadly, during subsequent centuries woefully few anglers paid much attention to her sentiments.

When I started seriously fishing on the Texas coast during the mid-60s (yes, this time the 1960s), limits on inshore finfish virtually did not exist. Both commercial and sport fishing were wide open.

This is not to single out the Lone Star State. The same free-for-all attitude was prevalent pretty much in all regions and for all species. Atlantic salmon in the northeast, for example, took a terrible beating from commercial nets on the high seas and unrestricted sport fishing in the rivers.

The plight of the Atlantic salmon inspired perhaps the most significant voice in modern finfish conservation.

Angling author Lee Wulff, a salmon authority, wrote prior to World War II, "A sport fish is too valuable to be caught only once." I paid tribute to Wulff in last month's feature on outdoor communicators, but he deserves additional acknowledgment.

He was a true visionary and understood that catch-and-release was the key to the future of quality sport fishing. That was an advanced concept back before most of today's graybeard geezers were even born.

Wulff wrote in 1958 in his classic book, The Atlantic Salmon, "Of importance to anglers today is the ability to catch and release a salmon, unharmed. In the early thirties, to release a salmon (in a river) was considered heresy by both guides and anglers alike. The general belief was that in order to bring a salmon to shore, it had to be played to utter exhaustion and would not recover."

So what does the long-ago controversy over Atlantic salmon have to do with Texas - well, a lot when you consider that the same "would not recover" argument was parroted all along the Gulf Coast. Big speckled trout, especially, were considered goners.

True, if a large trout is roughly handled or kept under duress for a prolonged period, the fish might "belly up." Post-spawn sows during the heat of summer are most vulnerable to abuse. But if reasonable care during the landing is followed by a prompt release, the odds of survival soar. A fish hooked cleanly with a lure or circle hook (opposed to hooked deeply with a J-type bait hook) has an excellent chance.

Wulff proved this by keeping fly-caught salmon for days in a holding pool near his river camp, and Texas Parks and Wildlife Department biologists proved this during the 1980s with tag returns from speckled trout - not to mention redfish. Reds practically are bulletproof.

Most of the tagged specks and reds were caught by rod-and-reel, then placed in tagging trays and stabbed with dorsal tags - far more abuse than a quick catch-and-release drill. I recall one early TPWD tagging survey of trout in upper Galveston Bay; approximately 50 tags were recovered by anglers. Most were caught in the upper bay system but a few ranged as far as the Galveston Jetties and lower West Bay/San Luis Pass.

As another example, the annual STAR Tournament sponsored each summer by the Coastal Conservation Association releases 60 tagged reds at key sites all along Texas coast; most years 10 or 12 of those tags are returned (many by unregistered anglers).

Point is, the majority of sport fish will survive skillful and conscientious catch-and-release. You need only to look at the nearest reservoir to realize that the concept has worked for years on largemouth bass (first mandated in professional tournaments by BASS founder Ray Scott during the '70s).

But Wulff championed catch-and-release about 75 years ago. Surely other tuned anglers back then realized the validity of "putting 'em back," but he was the one who really spread the word. He deserves a lot of credit.

As an interesting parallel, about the same time state officials in Texas actually implemented several sport-fishing size limits on inshore species. Most impressive, the old Texas Game, Fish and Oyster Commission authorized in 1930 a slot-type limit of 12 to 32 inches on red drum.

Bet you didn't know that. I certainly didn't until tackle collector and sporting artist Ben Kocian of Houston obtained a copy of the "1930 Digest of the Fish Laws, State of Texas."

No mention was made of a general sport-fishing license but a Texas Artificial Lure License was required.

The plugger wishing to chunk hardware in saltwater or freshwater "must secure a license, the fee of which is: resident, $1.10; non-resident, $5."

You would think it would have been the other way around: a license for natural bait such as shrimp and baitfish but a free pass for the angler using artificials. It's generally considered harder to catch large numbers of fish (opposed to trophy-class ones) on lures - especially during the pre-plastic era.

In addition, it was illegal to use an artificial lure during March and April. I assume that applied in both freshwater and saltwater, since no designation was given and the time frame would protect at least a portion of the prime spawning season for black bass in lakes and speckled trout in bays.

The old Texas Game, Fish and Oyster Commission gets points for attempting to protect the finfish resource but the slant was odd, out of touch with reality. You could soak a live "brownie" on a green March/April tide, but no spoons or plugs. And, no small matter, commercial fishing was wide open.

Hart Stilwell, the top Texas outdoor writer of the time, fired a shot at the old agency's pro-commercial stance. In his 1946 book, Hunting and Fishing in Texas, Stilwell wrote, "The huge Laguna Madre where we do most of our fishing has declined. Everybody has his own idea as to what caused this, and up to the present time the Texas Game, Fish and Oyster Commission seems entirely content to let this fishing go to hell and to continue with its passionate efforts to improve the condition of the oyster. What most of us who fish these bayshores think is that year-in and year-out drag seining has caused the change.

"...if you suggest to the Texas Game, Fish and Oyster Commission that maybe the constant drag seining in the bay has something to do with it, the Game Commission will get a gleam in its collective eye and begin telling you about the love life of the oyster."

Stilwell was a pioneer light-tackle plugger and I've been told he was a crusty, dead-ahead kind of guy. I don't doubt it.

During the 1950s the old agency was replaced by the Texas Game and Fish Commission; however, this wasn't necessarily a progressive move for conservation. Commercial fishing remained virtually unbridled and most of the various laws pertaining to rod-and-reel fishing were discarded.

The lure license was abandoned but by the early 1960s a general $2.15 fishing license was required (fresh and salt combined). That was pretty much it.

For example, in the 1962 Digest Supplement, Game and Fish Regulations, State of Texas Game and Fish Commission, only black bass, white bass, crappie and freshwater catfish were recognized: "All other fish species not specifically listed are not regulated as to season, size limit, bag or possession limit."

That utter indifference to such a valuable coastal resource is fairly mind-boggling when you think about it.

The agency ultimately became the present Texas Parks and Wildlife Department/Commission, but saltwater remained wide open through the '60s and into the mid-'70s. The lack of regulations combined with increases in commercial/sport pressure triggered the decline of redfish and speckled trout that led to the sweeping reforms of the late '70s and '80s.

Coastal anglers were, on the whole, slow to accept the proposals of bag and size limits. After all - and with some justification - they argued that as long as commercial pressure was uncontrolled, why should rod-and-reel fishing be restricted.

The supercharger was the founding of the old Gulf Coast Conservation Association during 1977 by a group of Houston-area anglers. I detailed the chronology of GCCA (now CCA) and the "Save the Redfish" campaign in the second part of a three-part series last year, Plugging the Texas Coast (Texas Saltwater Fishing, June 2011), and don't want to repeat or, as they say, wade through used water.

Suffice to say, that pivotal period saw the first length and bag limits of the modern era, the commercial ban on "sport fish" such as speckled trout and redfish, and the introduction of saltwater hatcheries. All three factors were huge in the rebound of our inshore fishing.

During the past 25 years TPWD has done an outstanding job of protecting and promoting the coastal resource. Regulations on trout and reds have continued to tighten and there's no need to detail the current laws here. That's why the free booklet, 2011-2012 Texas Parks and Wildlife Hunting and Fishing Regulations, is available.

Progressive limits are in place and a strong catch-and-release ethic continues to gain momentum on the Texas tides. Fortunately, strict catch-and-release is not necessary along the Gulf Coast. Specks and reds are prolific and resilient; both species can absorb reasonable catch-and-keep.

And this is good. Both are excellent on the table (especially smaller trout). And, after you cut through all the fluff and hype, the true and primal goal of fishing is to catch a fish to eat.

But, having said that, it's very nice to open your hands on a trout or red - not just a "dink" but a fish of consequence. Watching that gleaming beauty swim free on a green tide makes the day better.

And, laws aside, I do believe most dedicated coastal anglers sincerely support the concept of not being "too greedy in catching your said fish as in taking too much at one time."

Of course, it took us more than 500 years to get there.