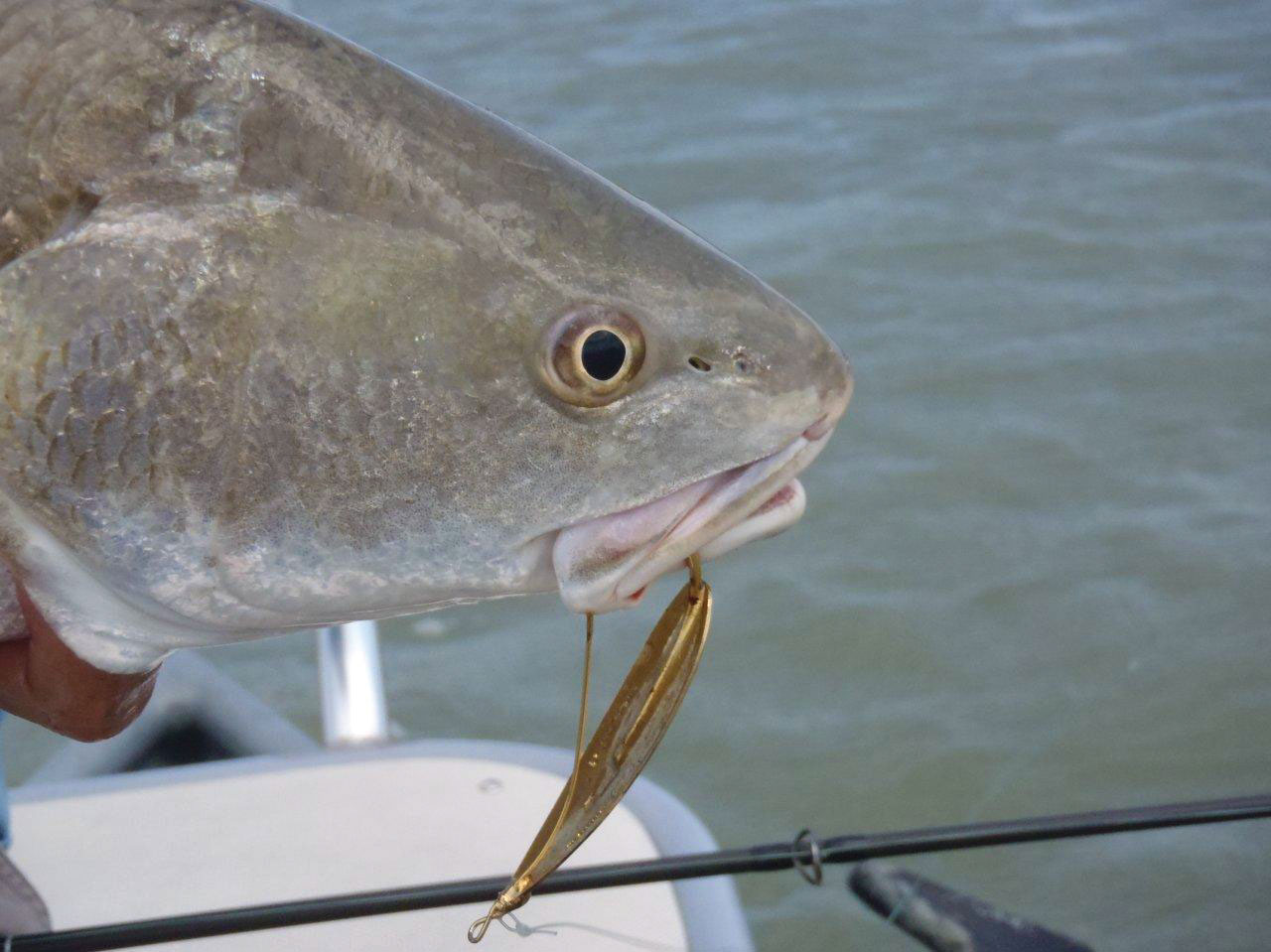 If I were stranded on an island with a rod a reel and someone told me I could have only one lure with which to catch fish and feed myself, I would ask for a Johnson spoon.

That's a heavy endorsement from one of the saltiest lure chunkers the Texas coast has ever produced; frankly, Johnson Lures fumbled big-time by not promoting that unsolicited praise.

The late Rudy "The Plugger" Grigar's fishing career spanned more than 60 years; he helped define the game of wading and casting artificial lures, and attained legendary status among A-Team anglers during the '70s and '80s.

Grigar seldom fished from a boat and he never (at least during the 25 years I knew him) used natural bait. He was headstrong and opinionated and had his detractors - but no one ever said the old man didn't know to fish for speckled trout and redfish.

And his loyalty to the venerable spoon should be worth a closer look amid all the hype surrounding the latest "killer" soft-plastic tails and dog-walker topwaters. The simple metal concept is perhaps the oldest of saltwater artificials yet, despite its heritage, the spoon is the forgotten lure on today's tackle shelves.

Grigar's favorites were the Sprite and the Silver Minnow. Nothing new there.

The Johnson Silver Minnow with its single upturned hook was introduced in 1920 (mainly as a freshwater bass lure), and the Sprite with its single treble hook affixed to a tail split ring premiered in 1950. The Sprite is an all-around choice for open water while the weedless Silver Minnow is a specialized lure, excelling over the shallow grass and shell favored by redfish.

A great but long-discontinued line of spoons was offered by Dixie (Schumacher Company) of Houston. The 3/4-ounce Jet and 5/8-ounce Siren especially were killers. You still can find them at tackle swaps and on the internet - trust me, they are worth obtaining.

But, day-in and tide-out, the Johnson Sprite is the gold standard (or silver or copper, depending on preference) along the Texas coast.

Regardless of make or model, the properly weighted and designed spoon for the available water has several major advantages:

First, the spoon is the most versatile of all lures. This is a biggie, probably the main reason why old salts such as Grigar rated them so highly.

You can fish a spoon fast or slow, high or low, to stay in the strike zone. A skilled angler using a longer rod and a fast-ratio reel can skip the concave face across the surface. This is most effective when blind casting over mixed grass and sand on a thigh- to waist-deep flat. You skitter and splash the spoon then pause, allowing it to flutter down into each white pothole.

At the opposite extreme, you can bump the spoon along clean bottom - excellent for flounder or when reds are holding deep in a gut or channel.

Another strong point - a flashing, wobbling spoon can be deadly in the sandy or sandy-green water all-too-common along the upper coast. A soft-plastic tail with minimal vibration and "show" sort of gets lost under a southwest wind (we all know what SW does to water clarity).

Here's another big plus: The compact hard-metal spoon has superior ballistics. When distance matters, the proper spoon backed by an "educated thumb" will outgun a soft plastic of similar weight every time. This especially is true when you're forced to cast into a stiff breeze. For this reason, a heavier spoon such as a Jet or Kastmaster is an excellent choice for the surf wader punching into the prevailing onshore wind.

Covering water is a real advantage when fishing a monotone stretch of beachfront or bayshore. Those extra backlash-free yards cast after cast can make a difference during the course of a long wade or drift. If you can't reach 'em, you won't get 'em.

Larger torpedo-shaped topwater plugs have superior ballistics, no question. Some might even challenge a comparable spoon - but what if fish aren't looking up? You can allow the spoon to drop deep, deep, deeper.

But extra yardage means little if you are showing a dud. The proper spoon looks good. It imitates a crippled baitfish and there's not much out there on a green tide that won't take a whack at one. Even if trout or reds are chasing shrimp, the erratic flash and wobble of a spoon can be hard to resist.

If you really want to improve the odds under birds or in the surf, you can rig a lightweight streamer fly as a "trailer" on a two-foot mono leader. The trailer does not overly impede the action. Use 20- or 30-pound test leader to minimize tangling, and lob the cast to allow the trailer leader to open up during the arc.

The spoon is an excellent choice for the beginner. To repeat, it's a great payload, easy to cast, and there's really no way to fish it wrong. The rookie with a spinning outfit can simply chunk and wind and allow the concave face to work its magic. The spoon has more action and flash on a straight retrieve than any other lure. Case closed.

And the compact spoon with its single hook is relatively safe to work with when landing or unhooking fish. It's certainly easier to monitor and control than an elongated mullet-imitation plug with two or three sets of dangling trebles.

The downside to the spoon is that a loosely hooked fish is apt to shake free; this is because the metal lure flaps and pulls against the hook as the fish thrashes. Head-shaking sow trout have a soul-deadening knack of tossing a spoon on a short line. So, most regrettably, do snook.

A good trout or snook hooked in the hinge of the jaw or down in the throat - no problem. You'll put your hands on the fish unless you panic and break the line. But a hook through the thin lip membrane - Uh-oh. Oh, no!

Back to the positives, spoons are durable. This is more than can be said for soft-plastic tails. You might have to replace a bent hook or split ring, but the integrity of the hard metal lure remains bulletproof. Rugged construction may not be a significant issue when sight-casting to reds or big trout, but the spoon saves time and hassle (not to mention money) when "toothy" fish such as Spanish mackerel are slicing through the swells. Not to mention the plastic tails.

You can go through a pouch of plastics in a hurry in the surf or on the rocks. Chop, chop, chop - time to re-rig with a spoon. Chop, chop - Clank! Presto, you've got a nice two-pounder "Spanish" ready for the grill.

Spoons do tarnish - some more so than others. The Sprite especially is bad; for all its excellent fish-catching qualities, the lure is cheaply plated. The gleaming out-of-the-box finish seldom lasts long in any county with a coastal zip code. Fish one hard and forget to rinse it, and within a few weeks it will look like an encrusted bauble tossed aside by Cabeza de Vaca or Hernando de Soto.

But all spoons corrode and rust. Not to worry.

You can bring a tired old spoon back to life with a cleaning agent or, worst case, a total re-do with paint or nail polish. Back in the mid-'70s, Grigar painted many of his worn spoons bright chartreuse - the first application of this hugely popular saltwater color that I recall.

You can even paint an old spoon black; frankly, color may not be as important as action. On that note, adding a short, flashy skirt to the hook split ring increases the jive factor.

Re-issued spoons can work well but, eventually, a trip to the tackle store will be in order. More good news: Most spoons are about half the cost of most trout-type plugs.

But even NIB ("new in box"), proper rigging is important. I'm not through finger-pointing at the Sprite. The smaller (1/4- to 1/2-ounce models) have cheesy trebles. Change them out if you are serious about catching anything larger than schoolie "jug" trout.

Use a slightly oversized big-name treble or upturned single hook. The bigger hook will not booger the action. A good compromise for semi-weedless bay duty is to snip the lower treble point, leaving two points upturned.

Sadly, many spoons are not factory-rigged with nose split rings. Add a stainless ring of suitable size.

It's a rookie mistake to tie 10- to 15-pound casting or spinning line directly to the hard edge of the metal punch-hole. The typical improved clinch snubbed tight hampers action and the knot can be stressed against the abrupt force of a powerful cast. The good news is, the spoon may sail an astonishing 100 yards across the shimmering green tide; the bad news is, it's no longer attached to the line.

I don't trust snaps. They are handy but don't blame me if one pulls open on a big fish. Trust, instead, to the quality split ring. A small swivel (either added to the split ring or tied to the line/leader connection) prevents line twist, but the split ring by itself does a fair job by allowing the lure to flutter and wobble without restraint.

Without a nose ring, you can tie a loop knot on a heavy (30-pound) mono shock leader. Another option is to use a light wire leader. Loop-knot the wire to the spoon and add a swivel to the line-tie end. Use brown wire and a small black swivel for low profile, and rig the leader short enough (three or four inches) to keep the metal swivel outside the tip guide during the cast. This method was preferred by Grigar.

The properly rigged spoon is a classy no-nonsense statement. One look and you just know it will catch fish. I do not presume to be in Grigar's class, but I believe you could tote nothing more than a small box of spoons and fish with success from Sabine Pass to South Padre Island.

The right spoon for the available water will keep you in the game.