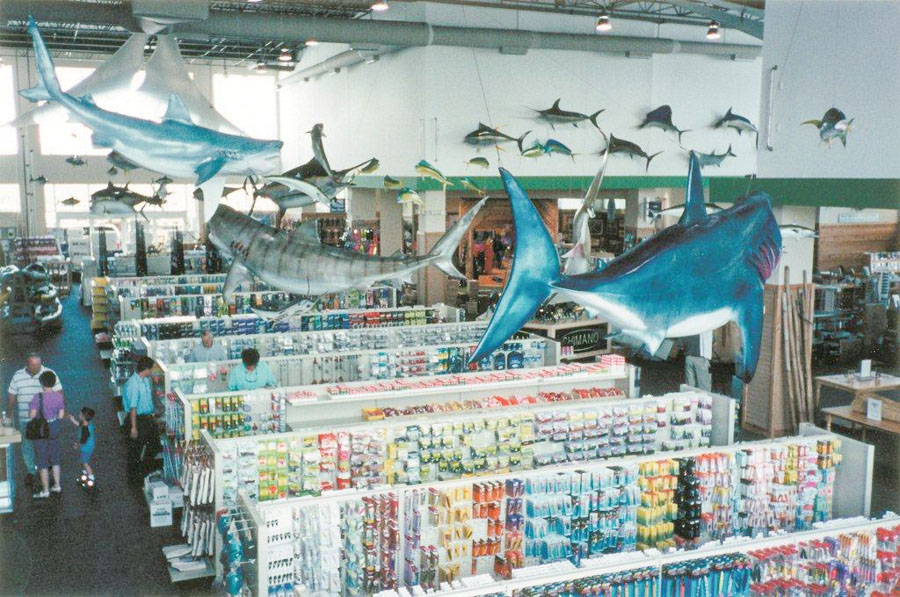 FTU on Gulf Freeway at Fuqua has worn the distinction of

Houston has been a major retail market for fishing tackle for more than 50 years. This is because the upper Texas coast offers year-round access to a remarkable diversity of outstanding saltwater and freshwater fishing.

Put simply, it's a sorry day when you can't catch fish somewhere within one-day reach of Loop 610.

Many tackle shelves filled with gleaming rods, reels, and accessories have been available in and around Houston since the post World War II era. Even before - but few anglers can recall the days of split bamboo and direct-drive reels.

I can recall approximately two dozen significant sporting goods stores, all locally owned and operated, during the past half-century in the Houston area. A similar number of national sporting goods stores and department stores offered tackle aisles. Some of these enterprises failed, but all helped supply upper coastal anglers.

Then, of course, we have Fishing Tackle Unlimited.

Well, early-on it was Cut Rate Sporting Goods. But, by whatever name, the Houston-based fishing tackle/marine accessory retailer is one of the great success stories in our sport.

Brothers Joe Meyer and Danny Meyer, founders of FTU, are Houston natives. Their father, Johnnie Meyer, was an avid fisherman, salt and fresh, and pushed his sons in the right direction - to the nearby lakes and bays.

Both boys were fixtures at the old Heights Tackle House during the early 1960's, then took different paths. Joe studied business at University of Houston then served as regional sporting goods manager for K-Mart; Danny joined the Air Force then became a sales representative for various tackle manufacturers.

"We finally decided to open our own retail store," Joe said. "In 1979, we got a 2,500-square-foot store on Telephone Road, stocked some quality inventory that was a good fit for local fishing, put up a 'Cut Rate' sign and were in business."

The store was a growing success but for the first few years not a major force on the regional radar screen. Then, as the market grew (no doubt aided by the turnaround of saltwater fishing during the early and mid 1980s), they opened the second store in a strip center at 8933 Katy Freeway (near Campbell exit).

The tackle/marine accessory store shared the same strip center with a hugely successful Carter's County Store, a great one-two punch for fishing and hunting in a serious market on the west side of Houston. The addition of Goode Company Bar-B-Q didn't hurt the prime lunch-hour crowd.

"The Katy Freeway store was going strong and we decided to move the Telephone Road operation to our big store at 12800 Gulf Freeway," Meyer said. "That was a major commitment but saltwater fishing was really growing and it is a great location on the main artery from Houston to Galveston."

"Most people heading for the beach do their tackle shopping on the way down, not on the way back, and we're on the southbound side at the Fuqua exit. It's also near the Sam Houston Toll Road."

The Gulf Freeway FTU store covers 32,000 square feet - a major venue devoted entirely to fishing and marine accessories and is fast becoming one of the largest "fishing kayak" dealers on the Gulf Coast. It's been acknowledged as the largest fishing-only retail outlet in the country. It says so right on the Gulf Freeway sign: "Fishing Tackle Unlimited, World's Largest Tackle Store."

Well, until now. Now, the Gulf Freeway FTU store looks to be a worthy second place.

The largest fishing store in the country promises to be FTU's new location, 8723 Katy Freeway, just a long cast east of the old Katy Freeway location. The two-level, free-standing building is a monster emporium providing 44,000 square feet of retail space. That's room for a lot of rods, reels, lures, lines - and virtually anything else you can think of in the realm of angling.

Mike Barbee, longtime manager of the old Katy store, will manage the new location. "The new store will have its 'soft opening' Tuesday, May 1," Barbee said. "We'll be moving inventory from the old store and adding new items all that previous week."

The official grand opening with factory reps on hand will run Thursday, May 3, through Saturday, May 5. The store will be open 9 a.m. to 7 p.m. daily, closed on Sundays.

"What we're really excited about is the concept of the new location," Meyer added. "It will be a store-within-a-store for a lot of major manufacturers. By that, I mean each one will have their own designated area on the floor, and each one will provide their own fixtures and displays."

"We'll have a separate fly fishing center," Meyer said. "Most of the big manufacturers of rods and reels will be stocked and the fly fishing area will cover about 2,500 square feet - about the size of our entire Cut Rate store back on Telephone Road.

"We'll also have our fishing travel service on hand - Travelin' Angler, managed by Andy Packmore. It's moving over from the Gulf Freeway store." Andy's years of experience guiding for several Alaskan Lodges will continue to benefit our traveling customers who want to most out of their distant fishing excursion.

Other specialized areas will be a well-staffed tackle repair shop, kayak displays, fishing-oriented book/map/magazine shelves, and seminar spaces. According to Barbee, the plan is to conduct at least one major how-to seminar every two months.

But tackle, in virtually all types and sizes, will be the main event. The open floor will be devoted to aisles of lures and terminal accessories. Worth note, most of the gear will be suitable for applications on local lakes and bays - not to mention offshore gear for the Gulf.

If you intend to travel to a far-flung angling destination the store should have proper tackle backed by qualified experts, but the primary focus is on Texas fishing. From bluegills to blue marlin, from Christmas Bay to Christmas Island, FTU has got you covered.

This is not by coincidence. Joe and Danny are dedicated anglers. I've known them for more than 30 years, dating back to the original Cut Rate store and my early days as an outdoor writer for the Houston Chronicle.

The Brothers Meyer are much more than tackle retailers - they are salty players with decades of hands-on experience. They still fish often, all across the Gulf Coast, as well as various remote venues. I suppose you could call these trips, "product research."

They know all about the right stuff, striving to stock new "killer baits" while maintaining the myriad of traditional favorites. Seldom, if ever, will you see fluff or el-cheapo junk on the FTU shelves.

Danny is more of a behind-the-scenes guy while Joe often is actively involved in promotional events, fishing tournaments, and conservation causes.

On that note, it should be understood that both men are long-time supporters of the Coastal Conservation Association (dating to the old Houston-based Gulf Coast Conservation Association) and Dave Holder's Houston Fishing Show. Incidentally, the annual Houston exhibition is claimed to be the largest fishing-specific consumer show in the country, making the two XXXL enterprises a good fit.

The May 1 opening of the new Katy Freeway location presumably will give FTU the largest and second-largest "tackle stores" in the country - a tribute to the Houston fishing market, and a remarkable success story for two brothers who years ago learned to fish the right way with their father.