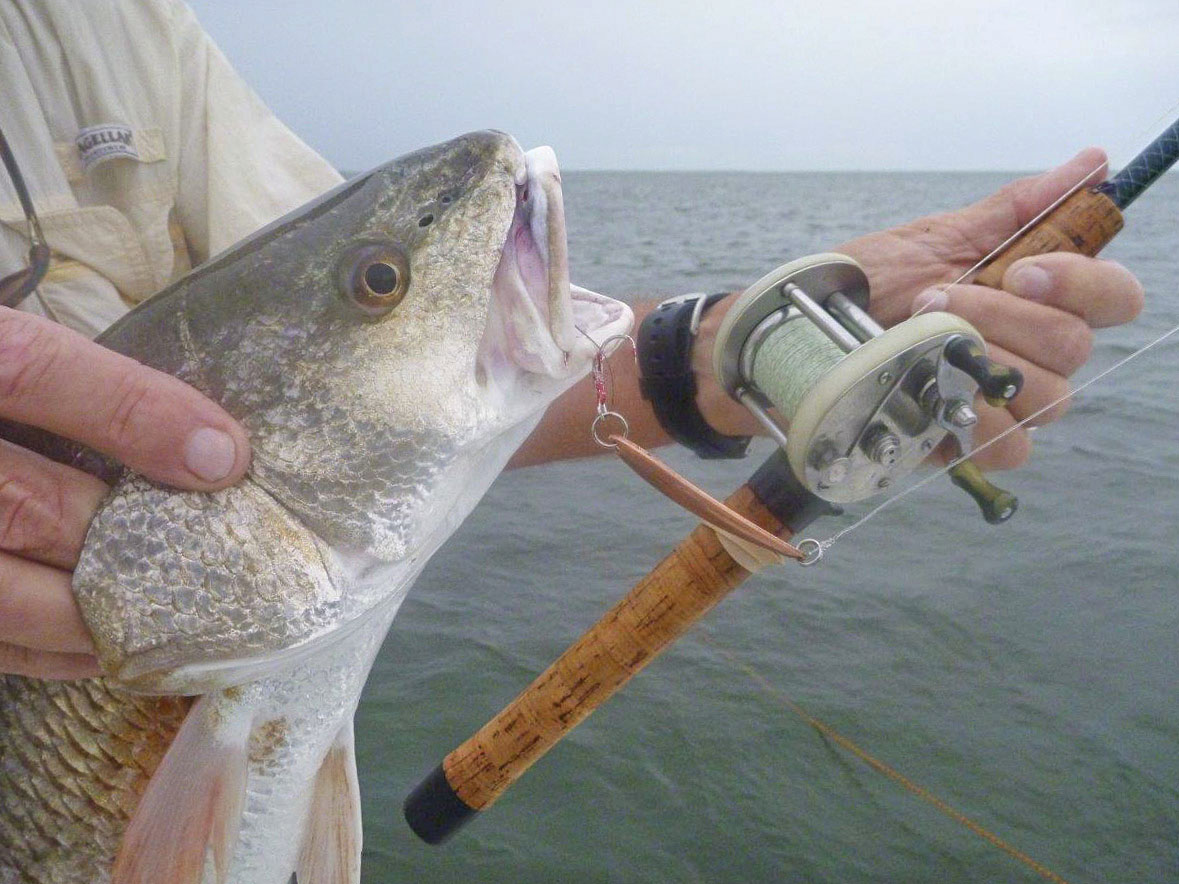 At least a dozen of my fishing friends are convinced that I am stuck in a time warp. Maybe they're right. This is because I prefer using 60-year-old casting reels over the latest high-tech models.

At least, this is my stance when conditions allow–wading at a slow pace and working a lure in shallow water. Under the right circumstances, the classic reels remain legitimate.

No, better than legitimate. They are exceptional. This is assuming you take the time and effort to understand what's going on. It's a basic game but, done properly, works with style and efficiency.

The old direct-drive reels are simple machines that deliver main-line contact–no anti-reverse, no freespool, no anti-backlash magnets, no internal drag. Somehow, this lack of support systems is appealing.

The casting reels originated from the "Kentucky reels" of the 19th Century (incidentally, plug casting is the only truly American type of tackle, as both fly and spin originated in Europe). The evolution peaked during the post World War II period of the late '40s and '50s.

The old reels were intended for use with limp braided lines (silk, nylon, Dacron). Tricky post-war monofilament was a poor choice because of the springy "memory" of the coils on the spool.

The entire industry changed with the introduction of the Swedish Ambassadeur 5000 during the mid '50s. Never, before or since, has a single product had such an impact on the tackle industry. The so-called "Red Reel" mated smoothly with mutinous mono and was the blueprint for the modern freespool casting reel. Within a few years the proud old direct-drive reels were doomed to dusty closets.

But that did not mean they were junk. They were excellent products, simply outdated. New equipment was on the shelves and the angling industry never looked back.

But I enjoy looking back. I recall those gleaming reels on the top tackle shelves when I was a young boy. They represented the highest level of skill, a dramatic contrast to the clunky push-button spincast rigs and awkward open-faced spinning reels.

I never lost that memory. So, during the past 12 or 15 years, the old American classics have been my go-to choice when wade fishing. I guess you could say I'm "watering my roots."

First, the old high-grade reels are pleasing to the eye. They have a clean and functional look, an understated elegance.

The benchmark was the Shakespeare President No. 1970. (Incidentally, the four-digit model number had nothing to do with the date of manufacture–a bit confusing.)

The full-sized President featured stainless sideplates fitted with trim plastic spacers and a functional handle with marbled opaque plastic grips. Gears were either brass or nylon and the bushings were Carboloy (the lightweight aluminum No. 1970A was finished in green). To reduce spool weight, a plastic snap-on arbor was available.

The President was rugged and powerful but smooth under thumb. It weighed approximately 9 ounces, a bit heavy, and held 100 yards of 15-pound line. During the late '50s the President retailed for $35.00a significant chunk of change (the whiz-bang Ambassadeur 5000 debuted at $45.00 and coastal dealers had trouble keeping them in stock).

A lesser known classic was the Shakespeare Standard Sportcast No. 1977, a narrow-framed little shooter with stainless sideplates and jeweled end caps. It offered a softly rounded metal "palming" rim on the left plate. The Sportcast No. 1977 was fitted with a cork or plastic spool arbor and could hold 50 yards of 15-pound braid. The reel weighed a mere 7 1/2 ounces and retailed during the '50s for $11.00.

The Sportcast was a beautiful little reel and the choice of many pro-class pluggers along the Texas coast.

The Sportcast No. 1973 was the anodized aluminum version; it was finished in dark green and boasted nylon gears. Remarkably, the 1973 scaled a scant 5 1/2 ounces.

Remember, this was a reel in its heyday during the Eisenhower administration. Think about that as the tackle industry continues to obsess over lightness. The little aluminum/nylon Shakespeare was light because there wasn't much to it, but what was there worked very well.

According to the Shakespeare brochure, the fast 1973 was, "The favorite of tournament casters and fishermen who know the joy of bait casting with light sporty tackle."

My second reason for favoring the old reels is, indeed, the "joy of bait casting."

The old salts made plugging an art. They realized that the elements of high performance were light (small diameter) line, a fast reel with a lightweight spool, and a light-action rod.

The great Texas outdoor writer Hart Stilwell wrote in 1946 (Hunting and Fishing in Texas):
"We use tackle especially suited for this (bay) fishing. The rod is from six feet four inches to seven feet, and it is considerably lighter and more flexible than most bass rods. The rod is built with a butt from ten to thirteen inches long, and this makes it possible to use both hands in the cast.

"The reel we use is the little midget Shakespeare Sportcast, and we use a ten-pound test nylon line. With this tackle you can almost throw a No. 5 (Tony Accetta) spoon away, and this is one kind of fishing in which distance frequently pays off."

Does Stilwell's long-ago observation sound familiar? Well, it should. The pro-class formula for covering today's tides is almost identical. Do not be deluded into thinking that those old salts did not play a fast-lane game.

But can the old reels cast as well as current models? Well, no.

Too many things are moving–not the least of which is the spinning handle during the cast. But a tuned reel can "chunk" a 1/4- to 1/2-ounce payload plenty far enough. You're not giving up a whole lot.

You need to adjust your timing. The dynamics are subtly different. An old reel starts slower because the handle must start turning as the spool starts revolving. Opening the casting arc a bit usually helps by allowing the flexible rod tip to load sooner. Once you get the timing, it becomes second nature.

Incidentally, I prefer using light-action graphite rods with the old reels. I'm not totally retro, mainly because the period bamboo and fiberglass rods are heavy and sluggish compared to graphite. I want to bring out the best in the old reels and the modern sticks help achieve this goal.

An important part of smooth casting is to cant the wrist to the left (right-handed caster) so that the spinning handle is angled up. This tweak has something to do with centrifugal force; the weight of the handle helps prevent the spool from overrunning.

Are the old reels as smooth as the new ones? Well, no.

Again, too much friction. But a drop or two of oil on the level–wind and the end caps and the handle shaft every few hours keeps things humming.

But a big drawback of the typical old reel is a pitiful retrieve ratio. Most are in the neighborhood of 3-to-1, compared to the current 6-to-1 and 7-to-1 rippers.

For this reason, an old reel is a poor choice during a wind-blown drift. You crank at a furious pace just to maintain contact. But, when wading, you can make it work. In fact, the slow ratio can be an asset when using a twitch-type plug. But, no question, a modern reel is far more efficient in covering water.

Is the drag as good? Well, no–mainly because there is no drag.

And that's great–the king thrill of using the old stuff. You have no idea how much a mechanical star drag drains the life from a trout or redfish. Conversely, using only your thumb on the spool allows even average fish to take line. Zee, zee, zee... there it goes!

Redfish were made for this game. A decent "slot fish" demands lingering minutes of give and take. You play the fish in a wide circle, thumbing the determined runs until the beaten fish glides close.

Of course, if you're trying to make every second count, the lack of drag may not be such a good thing; but if you want to savor each hookup, the direct contact acts as a supercharger. The Fun Meter jumps several notches each time the little handle spins and stutters against a pulling fish and a feathering thumb.

As an overlooked advantage of the old school, you can reduce tension almost instantly–something a sticky star drag cannot always accomplish. No mechanical brake is as reliable as your own thumb when it comes to quick or subtle adjustments on the spool. This is something to think about, especially on a short line when a big trout is boiling and bucking and hanging by a thread.

Bottom line: You're not giving up anything under a bent rod. Sow trout and slot reds are easy–and exciting–to play with an old reel. This is assuming you don't ham-hand the deal and trigger a ruinous backlash under a careless thumb.

A return to yesterday's bays may not be for everyone, but the soft whir of an old President or Sportcast laying a smooth cast across the open water is a pleasing echo of times and tides of long ago. If this has any appeal, the answer is right under your thumb.

The most difficult thing about using a classic casting reel is finding a good one in clean condition. Production of most models ended during the mid '60s.

Garage sales are hit-or-miss for quality reels. Best bets are antique tackle shows and swaps, or bidding sites on the internet (eBay, for example). The best choices are the top-end models and the narrow-framed models; avoid low-end models. Then, as now, the cheaper stuff seldom is a bargain for serious fishing.

A reel intended for fishing (rather than collecting) does not have to be in mint condition. A few cosmetic flaws are fine, assuming the reel is mechanically sound and the spool and handle spin smoothly. As a plus, the "used" appearance helps lower the price (good top-end reels should be available between $50 and $100, surprisingly cheap).

Two major things: Confirm that the level–wind does not stick or catch, and make certain the metal handle and plastic knobs are in good condition. A badly corroded handle or a frozen knob should be a deal-killer. Remember, a replacement might be very difficult to find.

Also, excessive play in the handle on the shaft indicates considerable wear; the reel might function adequately but the price should reflect the flaw.

One more shopping tip: A reel that seems smooth but stiff might just need a good cleaning. Old dried grease can clog the gears of a perfectly fine machine.

Classic "salt and pepper" nylon or Dacron line in the 10- to 15-pound test range is available through some tackle catalogues and major retail outlets. Or, you can use a limp superbraid of comparable diameter.