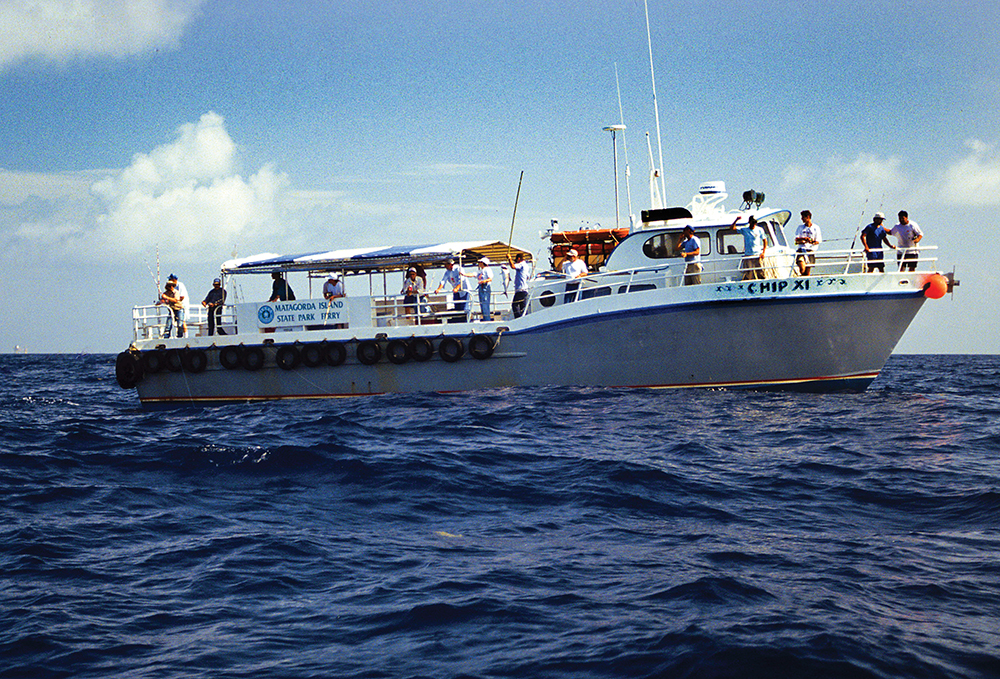 Some of the 1980s partyboats were recruited from the offshore oil and gas industry. Big Momma operated out of Sabine Pass and the Chip XI from Port O’Connor.

Sometimes it’s just best to go back to the partyboats, the big “headboats” that can fish dozens of people far off the Texas coast. Case in point: Years ago in March we tried to push the offshore season, easing out eight miles in a 22-foot AquaSport, before tying off to a Gulf platform. Our plan was to run further out if the weather cooperated but by 10 a.m. we were caught in a harsh, unexpected northwest wind with whitecaps crashing through the rig’s pilings. Time to go! Only one problem, we couldn’t make headway against those head-on seas—the Sabine jetties were directly upwind. So, we had to skate off to starboard into Louisiana waters, all the way to the beach. Protected by beach and distant jetties, we turned and ran along the light surf back to Sabine. It was a good thing we didn’t run further offshore; on that same day off Freeport there were boating fatalities. The following weekend we were back to fishing on our local partyboat.

These big craft are sturdy and safe, able to handle almost any weather the Gulf can dish out on short notice. On the day of that cold front, I wasn’t exactly a stranger to these bigger vessels, having fished them going back to high school days in 1968. Back then they were slow, filled with cigarette smoke, hot and uncomfortable. Yet, we kept coming back for more. No fish limits in those days; you could keep almost anything. If there was a deckhand on board, he spent most of his time fishing, unless someone hollered for the gaff. The captain might be sleeping, after driving most of the night. There were partyboats all along the coast.

The scene is quite different today, with only two Texas ports (Galveston and Port Aransas) still hosting partyboats. Both ports are centered around major tourism, which provides a steady flow of customers, even though red snapper season, their bread and butter fish for a century, is closed through much of the year.

Today, there are four-hour jetty trips, longer snapper trips of 8-12 hours, and then the serious overnighters that run a hundred miles offshore that cost far more. Generally speaking, angler fishing experience increases at least ten-fold, between the short jetty and long tuna trips. Jetty trips may catch nothing except tiny sharks, but it’s a good way for newbies to get the lay of the land and see the Galveston jetties. The quality fish stay close to the rocks, but an expensive partyboat won’t anchor close to wave-washed, cruel granite that has also snagged countless, expensive anchors. Instead they anchor at a safe distance, but beyond casting range.

The medium length trips take hours to reach offshore, and may result in only a third of the trip seeing fishing time. They could run faster, but that means burning more fuel. If a captain gets on a serious bite, he may not stay there long, hoping to preserve the spot for the next day’s trip. Why clean it out? Instead, he’ll move the boat around, which can see a sudden loss of fishing action. Back in the day off Cameron, Louisiana, we learned that pattern on the Sunrise III and after a slow morning, the captain always announced at 11:30 we’d try one last spot. We’d cut bait, ready our lines, work fast and haul in the snapper like crazy until….a loud honk of the horn at noon signaled it was time to leave. We’d hit that honey hole for exactly a half hour, and the captain was hoping to convince anglers there really was good fishing out there, if only they’d return. (That spot was somewhere on the Calcasieu Rock).

Today, partyboats on these medium distance trips go after anything they can keep. Galveston boats often return with more than 500 spadefish, for instance. These fish are said to concentrate around aluminum, and sunken wrecks, versus bubbling rocks where snapper congregate even more. Unfortunately, countless snapper are caught and thrown back during the off-season. Whether they’re being vented and the gas let out of them before dropping the fish overboard is unknown.  (A descending device works best but a steel hypodermic can also be effective if inserted into the swim bladder without penetrating digestive organs.) People report that, these days, snapper and amberjack released without proper venting can be seen floating behind partyboats, constant food for dolphins, sharks and large kingfish.

Occasional floating anglers may be seen; a recent video on YouTube showed a guy who actually fell off a Galveston partyboat, which I didn’t think was possible. Folks who were there said he was top-heavy and leaning over the rail when a whitecap rocked the boat. The guy can be seen paddling feebly in blue water with a life ring around him, and a six-foot hammerhead shark darting around, chomping on a floating amberjack and then a sizeable snapper. In zero current, it took some time to haul him back aboard. One wonders what might have happened with a strong current.

On the more serious overnight trips, most anglers carry their own high-quality tackle, instead of rental gear, mainly after tuna, both blackfin and yellowfin. They also get a shot at deep-dropping for sizeable grouper in depths of 700 to 900 feet, if they bring their own window or sash weights, ideally weighing from 6 to 8 pounds. It’s a more relaxed bunch of guys, not as crowded as the medium-range boats. There is time to sleep, or get up in the middle of the night and have plenty of deck space. The tuna mostly bite at night, but not everyone can stick it out.

With the Ides of March approaching, I’ve assembled a few pointers and lessons learned after fishing from 12 different partyboats in the past 50 years.

>Don’t book your trip a week ahead of time, instead wait for a favorable 24-hour weather forecast. Great weather certainly helps, as angry whitecaps can be pure misery.

>Take a Bonine Motion Sickness pill before heading down to the docks, just to be sure. They’re a trip-saver, if the wind picks up. Just don’t take two of these pills, or you will wind up near-comatose. Dramamine is easier on the system; start off with two, unless they’ve changed the dosage. (My record is 6-7 pills in one night when we were caught in 12-foot seas in a 26-foot boat, tied to an offshore rig in deep water. I was still able to jump up and work on deck 2-3 times that night, when called upon.)

>Try to grab a stern spot on the partyboat, if possible. All that scent and chunks of lost bait drifting astern in the current will attract predator fish, and you’ll have the first shot at them. Don’t assume that tying your rod to the stern railing will nail down a spot, however; I’ve had people move my tackle while I was bunked out. I always grab a bunk ASAP, as far from the howling diesel engines as possible. Much better to sleep in a bunk, versus a boat’s bus seat, with nice ear plugs. Other times we’d fish at the bow, which offers the most casting room.

>Essentials should include a sharp fillet knife, small cutting board, rough fish towel, and a few metal stick jigs that sink fast, different sized hooks, weights and leaders. Not sure what the current rod nomenclature might be, but if you have a stiff 8-footer and go up towards the bow where it’s less crowded, the deck crew may let you fling almost un-weighted baits far from the boat, where big snapper and kingfish lurk. Or even a passing ling. Standard partyboat rental rods are 6-foot broomsticks that really can’t be cast, they’re relegated to straight up and down fishing using 16-ounce lead weights. If you’re going to sling 2- or 3-ounce leadhead jigs or cigar minnows (bought back in town) at the horizon, use a reel that won’t backlash easily and will hold plenty of 40-pound line.

In doing so we’ve caught partyboat kingfish up to 51 pounds, and lots of amberjack. Also “black snapper” from 10-12 pounds, which are mangrove snapper, swimming near the surface behind the boat, picking up scraps. We’d hide a small 4/0 hook inside a drifting bait, and they couldn’t resist. Smaller 2/0 hooks are needed at mid-depth for spadefish and vermilion (beeliner) snapper, as well.

Be sure to dress right: Forget the shorts, the AC may be cold inside the cabin, or a night wind can be chilly. Wear comfortable deck shoes, no flip-flops. Long-sleeve shirt, for the sun. Even a wind-breaker. Keep in mind that the further offshore you go, the warmer it should get. Crews way offshore in January have reported fishing without shirts.

Whichever option you choose and regardless of their limitations, partyboats mean a day spent on the water. It’s an inexpensive way to be introduced to Gulf offshore fishing without spending a small fortune on an offshore boat, tackle, tow vehicle and then learning how to fish. It’s also a way for anglers to make new friends.