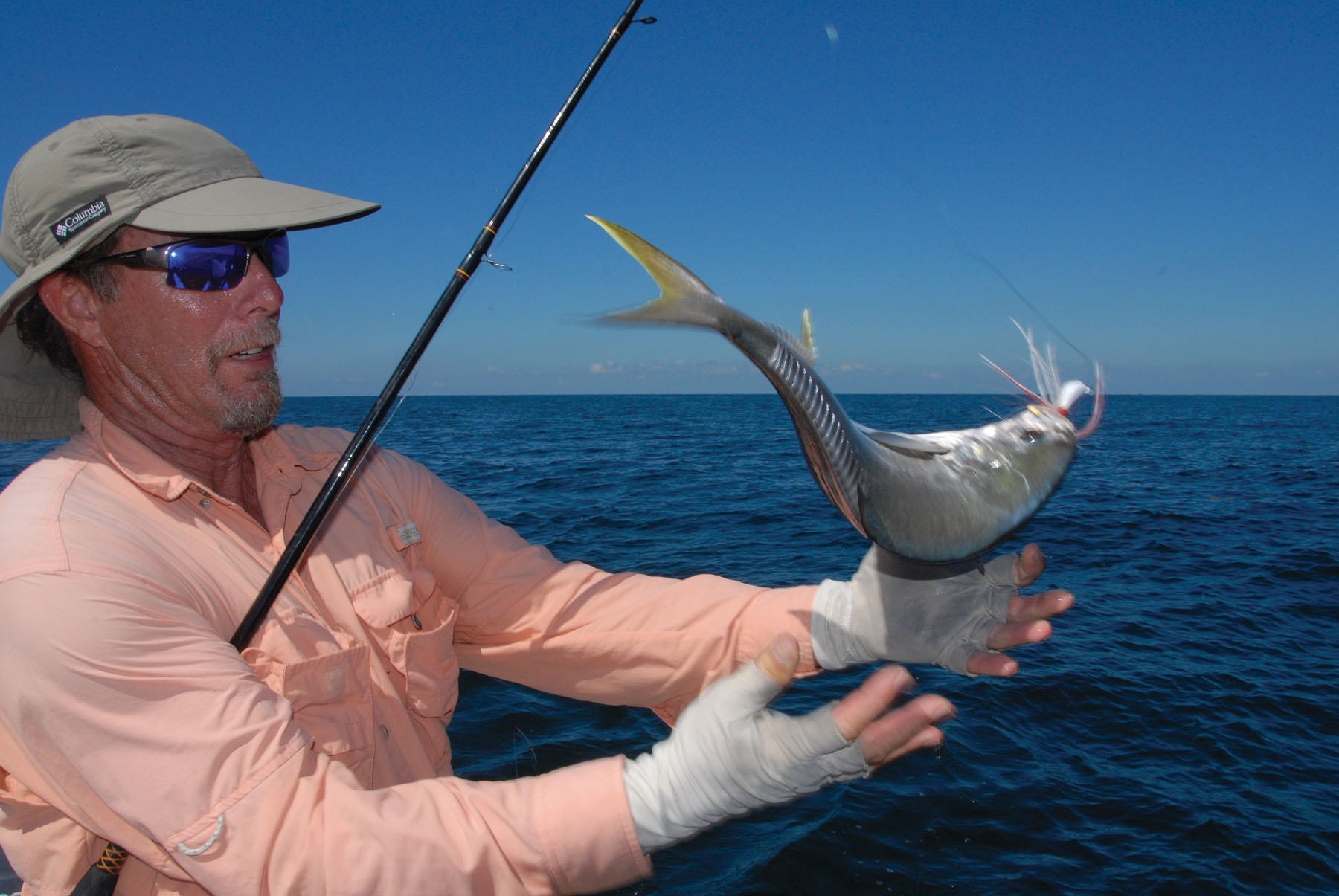 Come to Papa…Author juggles a feisty pompano that hit his home- made, 2-ounce, bucktail jig used for general purpose work at state-water platforms just off the coast.

Like Rodney Dangerfield, Gulf of Mexico production platforms scattered along the Texas coast within sight of land, in state waters, don't get much respect. The bluewater crowd disdains them, blowing past when headed for deeper water. Many of these structures sit in remote areas and are seldom visited or even known. That's a good thing, for guys like me. And so far, unlike so many platforms in federal waters, they've escaped "deconstruction" now mandated by the U.S. Department of Interior.

We fished about 18 of these structures last summer, some still standing since the mid-1970s. Years ago we fished them out of necessity, back when boats were small and gas was 30 cents. Like anglers today we yearned for green tides, because chocolate water was useless when slinging artificial baits all day. Back then, stuck with a near-hopeless situation, I was known to climb jetty navigation towers above granite rocks, hoping for a glimpse of dark water on a milky horizon. Sometimes I let out a whoop and clambered back down, and we were soon picking our way offshore even in afternoon chops. We knew that dark water, with 10 to 20 feet of water visibility, could yield an epic day.

And I can't say we ever had another boat in our way, when we got there…We had this nine-mile belt of coastal water all to ourselves. (Today, you might see one other boat on the horizon). One such trip: After wasting time sloshing up and down jetties awash in bad water, and spotting a promising green streak farther out, coastal artist Sam Caldwell and I soon found ourselves bobbing offshore in 40 feet of water, hooked to a 40-pound ling. There wasn't room in the boat to subdue or ice the fish, so Sam put it on a trout stringer, whereby it made a run and tried to cut off his hand. Sam said the picture I took should some day be put on his gravestone…It was an epic day. Our total was two ling and a fair pile of Spanish mackerel.

Out there then and now, we mostly jig; it still has the feel of "red reel" country, where baitcasting tackle tossing jigs and spoons can do serious work on ling, Spanish mackerel, pompano, big trout, legal snapper, slot redfish, tripletail and sheepshead. Today we carry a nice assortment of jigs and spoons, thanks to the Internet and bigger variety in the stores. Back then jigs were scarce in Texas so we improvised. A few "tick birds," the invasive cattle egrets, fell to our repeater .22 rifle and their best feathers were colored with Rit brand dye, and then wrapped around a leadhead jig. Catch a box full of solid trout with those homemade jigs, and you were a believer. Jigs cover the entire water column. Gold spoons too, lowered and fluttered down 30 feet to be doodle-socked, like our plastic worms up at Sam Rayburn Lake. Or cast to the sides for mid-depth, fast retrieves.

That's all summer and autumn fishing, of course. During winter and early spring it's a different ballgame. At these "short rig" platforms, as we call them, the winter drill is bait up a few small circle hooks with a piece of white squid on a boat rod with 40-pound line. Hit bottom, set the reel in gear and leave it in a rod holder, while attending to other matters. When the rod stop jiggling and takes a bow, reel up and see what came calling. Three hooks might yield three species, usually snapper and white trout with maybe a big whiting, bluefish, croaker or slot redfish thrown in. If you run low on squid or target bigger snapper and bull redfish, fillet a sand trout and re-bait. Even the head works. Catching a 10-pound snapper in state waters would be a real bonus, something to wave at your buddies as you return through the jetties. Back in the day snapper were more scarce; we were pleased with even a three-pounder. Today you never know; the water might turn crimson with red beauties within sight of land.

Most of these structures are rusty junk today, whitened with generations of bird guano, but still relentless fish-attractors in green water. After all, the fish don't care about paint jobs, navigational lights, horns and twisted structure. (However you don't want to run through these areas in fog or darkness, and they should be approached with caution). Last summer off Matagorda Island we were startled to see a 6-foot section of steel catwalk twisting in a light wind, ready to snap off and plunge 18 feet to the water. We made sure the boat didn't quite get underneath. A school of big Spanish mackerel kept us busy, you see, and we limited out between glances overhead.

Some platform clusters earned their own titles over the years, the most obvious being the Sadler Rigs straight off Sabine, nicknamed after Port Arthur's mayor, who tried to annex these structures eight miles offshore. For a time the five main platforms offered great action. Some of those rigs are gone now and others remain. Last summer we stopped there and pulled out a few good trout and slot redfish. We couldn't find a much-anticipated tripletail in the structures, but did so about halfway home, spotting a handy weedline with floating logs and tree stumps these fish favor.

Tripletail are a tasty treat mostly found in state waters, again missed by the bluewater crowd. As are pompano, which also attack our small jigs. On our most recent trip, hoping for baked pompano, I brought some finely-crafted Florida pompano jigs just for that purpose, working them at the platforms off Matagorda Island. However, big Spanish mackerel kept darting in and cutting them off with ease. We could only chip away at the pompano with spoons and bigger 2-ounce jigs rigged with short wire leaders. Fortunately pompano, when feeling feisty, will grab either one.

This summer we'll be back. Protected from federal demolition, these state water platforms make ideal artificial reefs within sight of land, at a time when gas is no longer 30 cents a gallon.

Platforms in federal waters have lately been disappearing at an alarming rate. Following the BP Deepwater Horizon spill, the U.S. Department of Interior ordered that all non-producing rigs be plugged and removed if they haven't produced in the past five years, leading up to Oct. 15, 2010. There are approximately 3,500 offshore structures remaining in the Gulf of Mexico. The Department of Interior directive, known as the Idle Iron Policy, may impact about 650 structures.

By "decommisioned" they are cut off below the sand with dynamite. The platform's main leg structure is then lifted onto a barge and hauled away. Circular saws can be used, but setting off dynamite inside each steel leg (in a series) is quicker and cheaper. The process is wasteful and plainly kills acres of fish at times. Only fish with air bladders float to the top, while the rest (like mackerels, sharks, flounder) sink to the bottom. Even bottom debris is removed, destroying all fish habitat. The process is incredibly wasteful and short-sighted. And unfortunately the process has been speeded up, with many landmark platforms removed in the past year and more on the docket.

However, The Rigs to Reefs Habitat Protection Act of 2011, introduced by Louisiana Sen. David Vitter, seeks to allow structures to remain in the Gulf as artificial reefs.

"More than ever, we need to create habitat for marine life in the Gulf, not dispose of it," Sen. Vitter said. "These idle rigs are serving a valuable purpose by supporting our fisheries, and it just doesn't make sense to remove them."

"The structures are generally regarded as the largest man-made artificial reef in the world, providing habitat to dozens of species of fish and marine life, many of which are structure-dependent," Brewer said. "Sen. Vitter, like all fishermen, realizes the critical connection between habitat and healthy fisheries, and we are grateful for his efforts to have those structures stay in the water as habitat and as popular fishing destinations for recreational anglers. If nothing is done, a tremendous amount of habitat will be lost and the negative impact would be massive. In the aftermath of the oil spill disaster, it is understandable that the federal government felt the need to be seen taking action, but this directive could create far more problems than it solves."

According to news reports, the Rigs to Reefs Habitat Protection Act would not allow platforms to be removed until an assessment has been completed to determine whether there are coral populations or other protected species in the vicinity of the platform, and to identify species with recreational or commercial value using the structure. If it is determined there is a substantial reef ecosystem around the structure, the decommissioning of the platform would be halted until it can be determined that removing it would not harm the reef ecosystem.

Vitter's bill sounds like the best idea since sliced bread, and we can only hope common sense prevails here. Rig losses so far have been almost tragic, and the loss of fish around each one can only be imagined, since sharks eventually clean up the evidence. Angler Daren Pickering encountered acres of floating snapper after a rig demolition, about 20 miles offshore of Packery Channel south of Port Aransas during the summer of 2010, and took perhaps the best pictures yet of the carnage. It shows acres of dead red snapper, a species regulated so carefully by the Feds that only a 6-week recreational fishing season exists today.