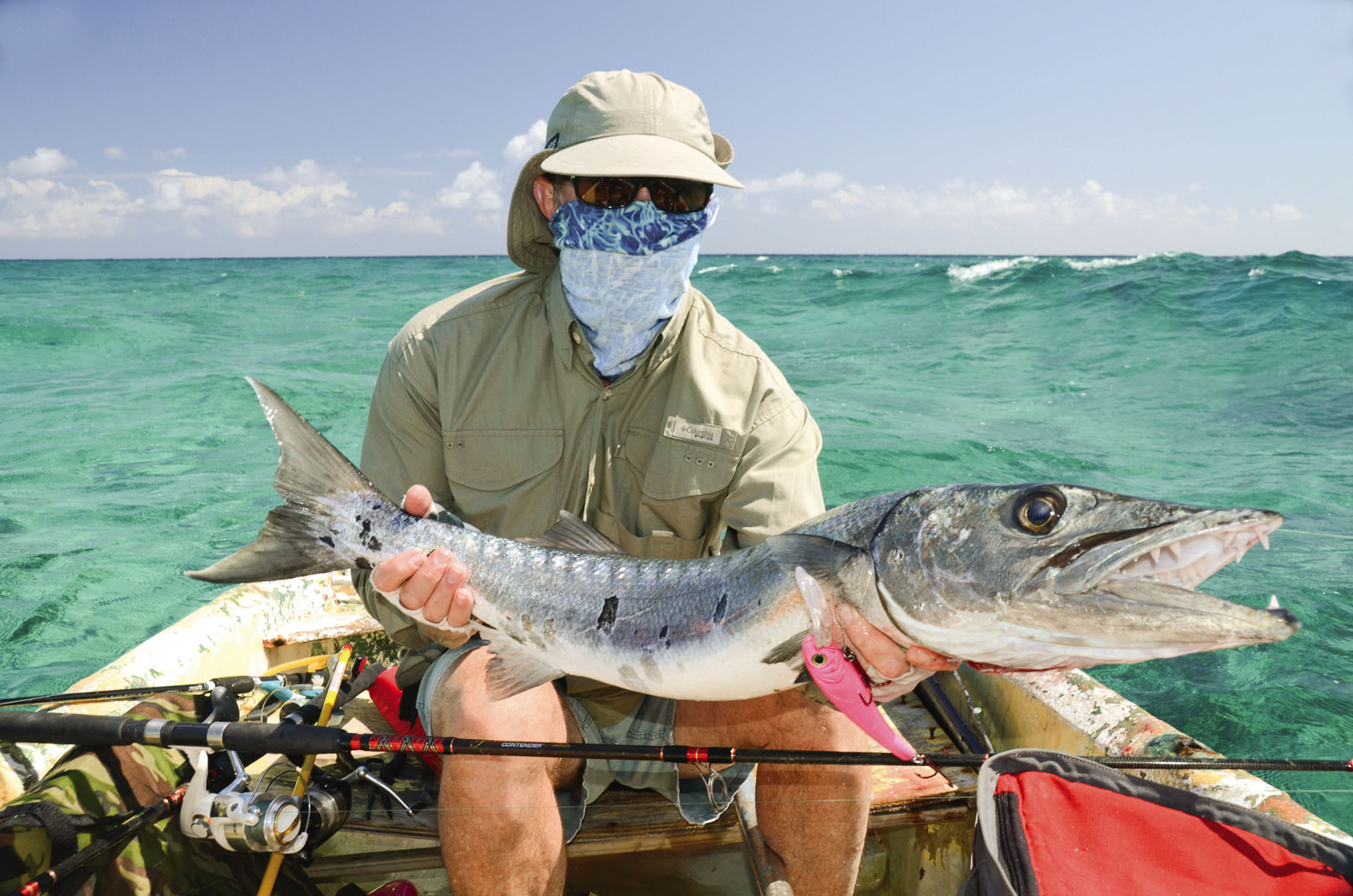 Author with another barracuda, after trolling around and through coral heads that towered 20 feet high, just below. A swell approaches from deep water, just behind him. Hoping the ‘cuda won’t go crazy in the boat.
Suffering through another grim February is a chore for most Texans, unless they have dreams of wade-fishing the coast for a lifetime trout. I always dreaded this month but was fortunate over the years to escape for a few days to the "rum latitudes" further south. And not always at tropical fish camps, where the guides are very good, the daily schedule scripted and everything taken care of.

We have often taken the cheaper routes, mixing with the locals and getting the lay of the land, so to speak. Staying at gated hotels certainly offers a different experience, anyway. Ditto for the cruise ships and their crowds, we stay many miles from their influence on local people and prices. We've found better rates, the people more open and fishing better, as a result.

We've fished around the Bahamas, where we don't see many Texans, who have historically fished closer Mexico and now even further south as far as Panama. Mexico is rough these days, while the Bahamas by comparison are completely idyllic. Their winter weather is certainly, with only a few cold fronts reaching these many islands. They're generally long and thin and rocky and often unprotected from wind, except maybe on one side.

Except for Andros, which looks like a big chunk of Florida was dropped in the water 150 miles offshore, southeast of Miami. This huge, mostly uninhabited place is amazing, with wild hogs running around in the forest, freshwater rivers, more blue holes and underwater caverns than Florida. One of the longest coral reefs in the world, dropping off to depths of 6,600 feet in what is called the Tongue of the Ocean. Clear water? You bet. It has countless places to fish out of the wind, even with kayaks, which is nice, since any traveling angler knows how the wind can hurt a trip. Here, there are no cruise ships or big motels or even deep harbors. American honeymooners head for the crowded capitol of Nassau and tourist casinos, but none of these diversions are found on Andros, thank goodness. Andros has long had a reputation for the biggest bonefish in the Atlantic or Caribbean. With plenty of tarpon and permit, too. To name but a few.

We usually stay at a modest motel called Love At First Sight for $95 double occupancy. It's built on a tidal creek with a swift current that delivers water inland to saltwater lakes stretching for a few miles. Fishing off the motel's patio is good at night for horseye jacks, some mutton snapper, and also tarpon in the warmer months. Out front towards the reef a mile distant, there are sand flats where you can catch bonefish before breakfast, without using a boat. This place still doesn't have boat rentals at their dock, a serious oversight that never seems to end. We've been fortunate to borrow a skiff with Merc outboard, exploring lots of fine water, including Tarpon Blue Hole up the creek and six miles inland, said to reach depths of 100 feet. Last trip we paddled there in kayaks, despite a blustery March wind, and really had to work our way back, hugging a mangrove shoreline. Ready for happy hour we were, as Yoda would say.

What I like most about this place is that you're free to do whatever you want. You have to create your own adventure. Rent a kayak for $15 a day and head for deep water. Fish all night in your boxer shorts, while everyone else sleeps. Dive anywhere with normally mild currents (but in the creek, only during slack tide), where I speared invasive lionfish. You can troll plugs around the coral reef heads, where grouper move in during January/February. Cast topwater plugs over shallow patch reefs for big mutton snapper and barracuda. Or, venture offshore several miles to the Navy's Autec buoy anchored in mile-deep water, where mahi-mahi and tuna congregate. It's pretty cool, catching tuna out of a Carolina Skiff. We have done all of these things at Andros.

The lack of structure on these trips is what we like. We're free to run our friend's borrowed skiff out there and flip it in choppy seas. No radio either, just a pair of oars if the motor quits. It's like going back in time, the real island life. If the boat needs gas, you may have to walk or hitch a ride down the Queen's Highway to the nearest fuel pump, which wasn't far. We've been stuck without a boat at times, but you have to roll with the islanders, life is simpler in the Bahamas. This is the place to slow down.

By contrast there is a bonefish camp right up the river a quarter mile. They have the nice Action Craft boats and guides with decades of experience. And these sometimes bored-looking clientele with fly rods, we see them pass by our dock each morning. Our motel has a restaurant on the water, open to Bahamians and even visiting groups of well-mannered school kids from another island; last trip they were being lectured on conserving marine resources. The bonefish camp nearby is a little more expensive; one week's stay there for a single angler gets close to an average yearly home mortgage. Guide and food provided, but not drinks.

We're happier to fish all day in the skiff, or wade fish. And bring the bacon home, so to speak, the fish served every night in the restaurant. Sometimes it was extra conch or lobster, too. And always a festive occasion.

During my February trip to Andros, the weather was calm the entire week, the water warm enough to swim all day. Sunny, too. In March it was windier, typical spring break weather. Our new friends staying there, from New York, taught us a few things about fishing there, they've been going for years. They had a simple enough technique; used small Shimano Stella spin reels packed with 8- or 10-pound line. They slung long, pencil poppers from the skiff, out in perhaps 10 feet of water, over multi-colored patch reefs, right in front of the motel perhaps a half mile. Vicky and Barry fought big mutton snapper and horseye jacks and were almost spooled with their small spin gear, I don't recall if they cranked the motor and chased the fish or not. I'd have given plenty to catch a 12-pound snapper on topwater with light tackle, but by the time Beaumont friend Pete Churton and I got out there, it was all houndfish and barracuda. The big hound bit me and was invited to dinner for causing trouble. One of the cudas jumped out of my hands onto Pete's leg, sticking treble hooks in his bare calf, soon tugged loose with handy needle-nose pliers. That little skiff made for adventure with 'cudas flopping around in the small spaces, we were worried they would bite the gas hose in half. The locals don't catch many cuda and urged us to bring them back, so we did.

Nothing like a little adventure. Here are some tips for fishing Andros:

>At night, if you have jigs or spoons that glow (zap them with a flashlight), you can fight fish much of the night if the tide is running out. Right off the dock. Tarpon wallow like hogs at night there during the warmer months, feeding on shrimp, but good luck landing one. Toss a DOA shrimp in there, and see what happens.

>Bring a flyrod and wade for bonefish and permit. If you're not into waving the wand all day, carry a spin rod with 8-pound line. And bring a 3-foot, live bait scoop net. Why? Small, two-inch crabs scurry across the spotless sand bottom as you wade along. Jump on that crab with the net, pin him down before he buries into the sand. Take his shell off, pin the remainder to a small, strong hook, and drop it in front of passing bones or permit, and watch what happens. They can't pass it up. Better lighten your reel's drag, because it's like being tied to a bottle rocket.

>Always bring 12-inch, green (rubber) tube lures for barracuda. And big dive plugs to troll the reefs. Maybe go barbless with both, because a doctor may be hours away. Topwater poppers and "walk the dog" lures work, and gold spoons always seem to catch something. Twice I've caught big mutton snappers with spoons.

Just remember, without staying at the structured fish camps, you have to make your own fun here. Arrange for a boat by whatever means possible, including through Miss Sheila, the owner of Love at First Sight on Andros Island. (Easily found on Google). Be ready to wade fish, snorkel, night-fish, kayak or borrow/rent a small boat from someone. It's been great for us. On another note, I've never understood why the Bahamians can't create a "state park" with sheltered waters here, inexpensive cabins, shade trees and campground, rental kayaks, BBQ grills, etc. to allow more visitors to enjoy this area.

If you fly to Andros, seriously consider a smaller plane. The big jets hauling tourists stop in Nassau, where your luggage is poked through and your connecting small flight to Andros probably missed or delayed, and you lose a night spent in Nassau. If you fly direct from Lauderdale to Andros's small airports in a smaller plane, they treat you very well, don't care how many fishing rods you bring, and hardly glance at your luggage. If your gear exceeds 40 pounds they said, "Aw, just give us $20 dollars). We landed in Andros Town airport, and took the taxi up to Stafford Creek where the motel is.

When our pilot landed the plane there, he glanced around at the pine trees and said, "Wait a minute, this isn't Cuba" Ha-ha.