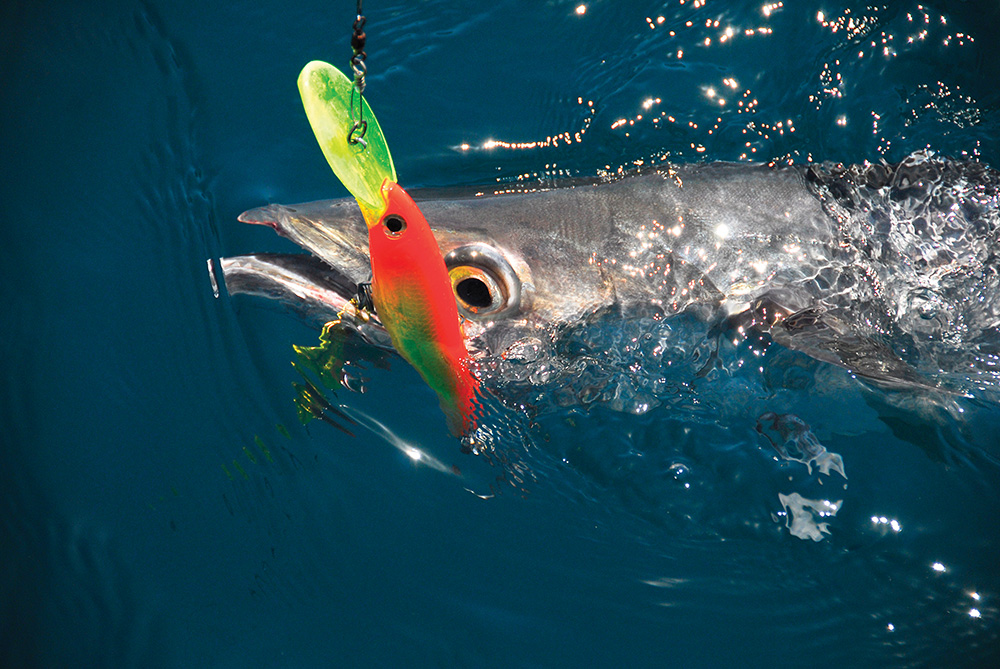 Catching limits of kingfish at the new artificial reefs shouldn’t be too difficult.

In recent years Texas state waters have seen serious progress, in building artificial reefs that can be maintained and fished without federal interference. And these structures were greatly needed. Our offshore anglers had a huge dependence on oil and gas platforms during the past 50 years—but then many were suddenly removed. Anglers were hurting for structure to fish, and Texas lagged far behind other Gulf states that had progressive reef-building programs decades ago. These big, new Texas reefs will certainly help. Once that material hits bottom, fish begin moving in overnight, though it takes time for a reef to “mature” with natural growth to build a complete food chain.

Fishing these reefs is a different ball game—more complicated than tying up to a Gulf platform that can be seen 10 miles away. Many anglers will have to learn new skills and techniques out there, to adapt. Viewed from the surface, these fish-nourishing reefs are invisible. It’s like anchoring or trolling in the middle of nowhere, unless they’re marked with a buoy.

I’ve fished a number of Gulf bottom structures over the years, from boat wrecks to natural (often bubbling) rocks further offshore. And there was the old Car Bodies reef off Galveston, built in the early 1960s. Corrosion and hurricanes diminished and scattered most of that reef, since thin car steel doesn’t last in salt water. (No longer approved for reef material, either). However, some of that reef is heavy concrete pipe, durable enough to last for generations. We certainly did well, fishing there 30 years after it was built.

We’d reach the coordinates, make several passes, mark different structures on bottom, toss a buoy on the biggest one, and then study the current’s direction as it impacted the buoy. Then it was anchor straight up-current from the buoy, pay out rope, back down and ideally tie the rope off exactly next to the buoy, stowing it back in the boat. This didn’t always happen; wind and wave direction invariably alter that scenario. Sometimes we had to re-anchor. Hauling up anchor is work, but we learned to use a sliding buoy on the anchor rope, gunning the boat forward 30-40 yards to pull that anchor to the surface. It was certainly more complicated than sticking a rig hook on Gulf platforms.

That artificial reef often paid off handsomely, and with seldom another boat around. As with any boating trip, there are hazards there. While anchored in the open Gulf, one has to keep an eye out for passing boat traffic—seldom a concern when tied to Gulf platforms. While anchored at the Car Bodies, a friend had his boat run down and flipped by a big pilotless shrimpboat. It was a cold autumn swim and an awkward meet-up, when they were finally pulled from the water by the shrimpboat’s sheepish crew.

That Galveston reef is small compared with today’s five big multi-acre sites currently being developed off the coast. They mostly consist of concrete, often storm-sturdy pyramids that can deflect bottom-scraping shrimp nets without getting snagged. The same pyramid design, though made of steel, is used to guard underwater vertical “Christmas tree” wellheads in the Gulf. We once dove one of those off Freeport in 140 feet of water—the structure was about 10 feet tall, had a door for maintenance work, and left ajar, had lots of snapper both inside and out. High above prowled a school of hungry amberjack.

With so much effort and expense going into the five new reefs, you can bet they’re using the right material. Texas has a high-energy coastline, and it can get seriously rough offshore. State waters within sight of land aren’t that deep, so heavy material is used that can take a pounding from waves and terrible currents during hurricanes. At the same time, you want material that readily attracts marine growth, which requires concrete with the right Ph chemistry. Ocean Ph (acidic versus alkaline) is said to be 8.3, so the closer reef material matches that number, the more readily barnacles, corals and algae will attach and grow. That keeps the little critters happy, until big predators arrive for a meal.

On a typical trip taken during autumn (when there is less fishing pressure offshore), we’d anchor and bait up with a few frozen squid, having bought a pound or two back at the marina. This was good for keeper snapper, sand trout, croaker, whiting and slot redfish, mostly. Smaller sand trout were filleted and used for cut bait. An entire trout carcass might bring a sudden strike from bigger snapper or oversized bull redfish. Once, while using half a big croaker, a big rod bent double and then a huge tarpon took to the air, ultimately spooling the big reel before we could pull up anchor.

It was another reason why one should keep a buoy attached to that anchor rope. You never know what will grab a bait out there, maybe a huge ling, shark, kingfish or tarpon. A quick crew can dump the buoyed anchor rope, crank an engine and follow the fish. And big fish will be prowling these new reefs. It just requires patience and a willingness to move the boat around, and anchoring on the up-current side of the reef so that bait, smell and chum will attract additional fish from down-current.

I must be old-fashioned, but fishing around a buoy sure helps with the orientation. I can picture compass direction out there on a clear day, and it seems easy enough to remember bottom structure on one side of the buoy or another, even cast to them. If other boats are bothersome, one can resort to a black, quart-size oil container for a buoy, something you would really have to watch for, and recognize. A big, orange buoy will attract other boaters from afar. To really avoid attention, one can rely strictly on a GPS plotter.

Most of these five new reefs cover 160 acres, so each is a quarter-mile square. Big enough for plenty of elbow room, but small enough to watch the other boats. If you see excitement in another boat such as a flailing gaff, a waved landing net, fish being yanked aboard or the crew dancing and high-fiving, well, it’s awful easy for another boat to ease in close by, to cash in on the action. For that reason, it’s a good idea to practice tried-and-true methods of “body language discouragement” around other boats. Such as sitting around not fishing, no bent rods, bored expressions, slumped shoulders, eating lunch or a drink in hand, etc. Who would want to anchor next to that?

One can also drift-fish over these reefs, either while jigging deep or drifting lightly-weighted baits far below. These reef fish are more scattered than clustered tightly around a platform, so patience is required. Start the drift up-current of the 160 acres, drop baits and keep an eye on the fishfinder. Keep a buoy handy, or press the man overboard button (MOB) when an enticing picture appears on the fish finder. A small area loaded with fish can then be returned to for additional action.

Another tactic is to troll plugs over these reefs, taking care to avoid another boat’s fishing lines or worse, anchor rope. Today there is a large assortment of big-lipped, diving plugs that wiggle down to 30 feet and more, if braid line is used. Never a big fan of braid, I’ve pulled these plugs with 40-pound mono line, and they worked fine. Troll a spread of four plugs of difference colors, some almost in the prop wash and others far behind the boat, and action shouldn’t take long to arrive. Kingfish and jack crevalle are expected, but anything can hit those big plugs, even snapper and tarpon. However, caution advised, when landing powerful fish with big treble hooks. It’s best to clear the deck, open the ice chest, swing the fish inside and slam the lid shut until it quiets down, plus add a few minutes. Gaffing is optional. Remember, these offshore fish can twist around and slam a big treble hook into someone quicker than a cat can lick his buns.

These five new reefs have a wide variety of sponsors. I’m a personal fan of RGV Reef, whose sole purpose is to coordinate and build the largest, most ambitious offshore reef off Texas, at 1,650 acres. They’ve built low habitat for small snapper, and then lots of general-purpose pyramids. This summer, they will stack many tons of concrete in piles they hope will reach a 45-foot height, within 30 feet of the surface, to attract mid-water kingfish, ling, sailfish and tarpon. Located off the coast between South Padre and Port Mansfield, the RGV reef, 10 times bigger than the others, has the advantage of slightly deeper water—always a plus when the Gulf above gets rough.

Their RGV Reef website can be found at: rgvreef.com

Credit also goes to Atlantis Marine Habitat in Freeport, the company that has built thousands of tough but marine-friendly concrete pyramids known to withstand serious storms. Their pyramids were used on all five new reefs and should last for generations to come.