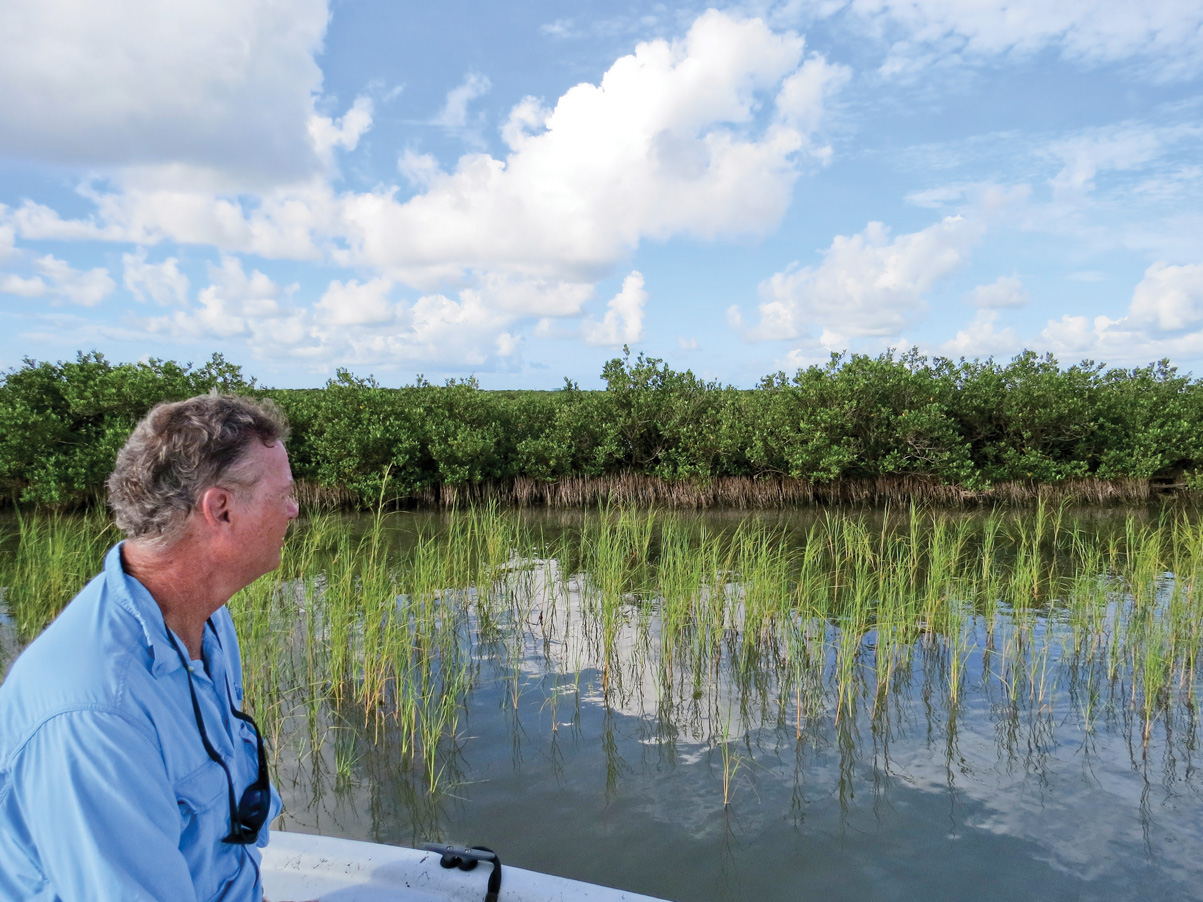 Black mangroves have an almost impenetrable root system, but they can shelter and retain green water on windy days. Photo by Petra Hockey.

For years I scorned the black mangrove trees that have taken over the middle Texas coast, with the assumption that their combined root systems are way too tight for sheltering fish. They’re nothing like the expansive red mangroves that actually grow in the water and shelter considerable marine life, even big fish like goliath grouper. Instead, black mangroves concentrate on tidal ground that is generally above water at least half of the day.

Lately, I’ve gained a new appreciation for these dense coastal thickets. With a root system like a fine-tooth comb, black mangroves allow a high tide to filter right through onto the sand flats beyond. Among other benefits, the trees also trap and protect clear water from the wind, which is great when bigger bays are being lashed to muddy chops. And as it turns out, black mangrove sloughs are a welcome haven during small craft advisories, if the tide is high enough. In short, when the water is over the docks and the wind is high, take to the trees.

Unfortunately, many boats are ill suited for going back into these sloughs, what with the large oysters and shallow water. Poling the boat seems to be the only option here because an electric motor with plastic propeller won’t last long around oysters. Few Texas bay boats carry a push-pole these days, or have crews inclined to manually push a boat around. A lot of boats today won’t even anchor. The only boats capable of getting around back in there are small, one- to three- passenger fly fishing skiffs, the kind preferred by fly guides who constantly pole around and explore the back bays. The same waters are also accessible by kayak and jonboat, the latter either poled or paddled. Airboats can also get in there, but I don’t really have anything good to say about airplane engines howling in quiet backwaters. Stealth is the name of the game.

These shallows have their challenges however, especially inevitable hang-ups from errant casts. Sail your favorite topwater lure into far branches, and you can either break off now or pole the boat across what might be a choice spot, spooking fish. Still, the promise of quality fish on windy days is worth it. Fortunately, we were raised back in the day on Sam Rayburn and Toledo Bend reservoirs when they were solid forests. As a result, we learned to make accurate casts around dense structure starting in high school, always using the red reel in those days.

During a windy spell earlier this summer, we sought refuge in one of these mangrove-lined ponds and quickly relearned the old ways, casting near thick vegetation. After suitably easing the boat into a point of trees, we’d tie a light rope to a handy tree branch—so close that mangrove leaves accumulated all over the boat. There was no need for a rattling anchor or Power Pole.

Hidden from view, we watched a steady procession of big boats skirting past, headed for a white-capped, chocolate-colored bay. Meanwhile, fishing from the bow, Patrick Geraghty from San Antonio limited out on sturdy, jetty-sized reds in only a half hour. Oh, it was sweet!

If we’d started with topwater baits, it would have taken more finesse and longer to catch limits, but I had fresh mullet and the reds were all over it. For some reason these shallow, what I call “creek redfish” were crazy over fresh cut mullet. After a time, we switched to topwater Spooks and the real fun began. Weedless gold spoons worked well, too.

Several lures had to be retrieved from trees on the far side, but we never lost one. (If a lure sails 10 feet back in the bushes, it’s a real chore to retrieve. During those windy days I suggested making easy, initial casts into open water, get warmed up and familiar with the spin tackle, before trying to work closer to trees. It was one classic blowup after another. The icing was catching nine reds at our next stop, a pond we’d never been to, but matching our sudden new requirements, which was green water in sheltering mangroves.

Getting blasted by reds on topwater plugs is the ultimate—the opposite of reeling in redfish from deeper jetty waters using bait. (Been there, done that.) The wind was howling and our 12-pound spin gear, normally fine in open water, was a little inaccurate when compared to baitcasting tackle. However, we got a better fight out of each fish with spin. Even trout were back in the mangroves, which was great to see. The action went on for several days until the storms moved further inland and its flood tide began to ebb. When that happened, the fish knew it was time to leave.

Once again my new jonboat shined, floating in five inches of water, and the occasional oyster scrape didn’t faze it. With low sides and olive drab paint, the boat was invisible and never noticed by passing traffic. One boat passed by so close, I set the hook halfheartedly (not wishing to be noticed) on a serious blowup, missing the strike.

Later, as we poled by a narrow band of trees and flooded sand flat on the other side of the pond, there was no sign of even a finger mullet, so these black mangroves really do act as a corral. Many big, fine oysters were protected in there as well, hidden away from commercial oyster boats, whose ravages of Texas bay bottoms are by now well-documented. Presumably these oyster’s young spat will travel and help repopulate the bigger bays, if they can still find substrate to attach to.

Back at the boat ramp after one of these trips, with wind advisories still in effect from tropical storm Cindy, a veteran jetty guide glumly unloaded one redfish from his big boat and proclaimed the combination of wind, current and tide that day was the worst he’d seen…or in his words, “the worst E-V-E-R.”From the dock, one could plainly see the edge of the storm cloud on the horizon, though we labored under harsh sun all day.

When asked how we did, I pointed to the mangrove leaves scattered in the boat, along with our fine catch. He stared at them like he was consulting tea leaves and it dawned on him: How rough can it get, fishing a pond lined with tree thickets? He’d just been through a tough day and his much larger boat had taken a beating with no chance of exploring where we’d been. Sometimes less really is more.

With the natural high tides of September, it may be time again to probe these mangrove thickets, looking for shallow fish. There may even be a few days of cooler or at least dryer northeast wind. Coupled with the higher tides, it makes for some great days on the coastal waters. After Labor Day the crowds have “runn-oft” back to school, dove fields or teal blinds, so fishing pressure is lighter. And if we should get another tropical storm in the Gulf during this prime hurricane month, raising tides even higher, you can bet these black mangrove thickets will offer shelter to fish and fishermen alike.