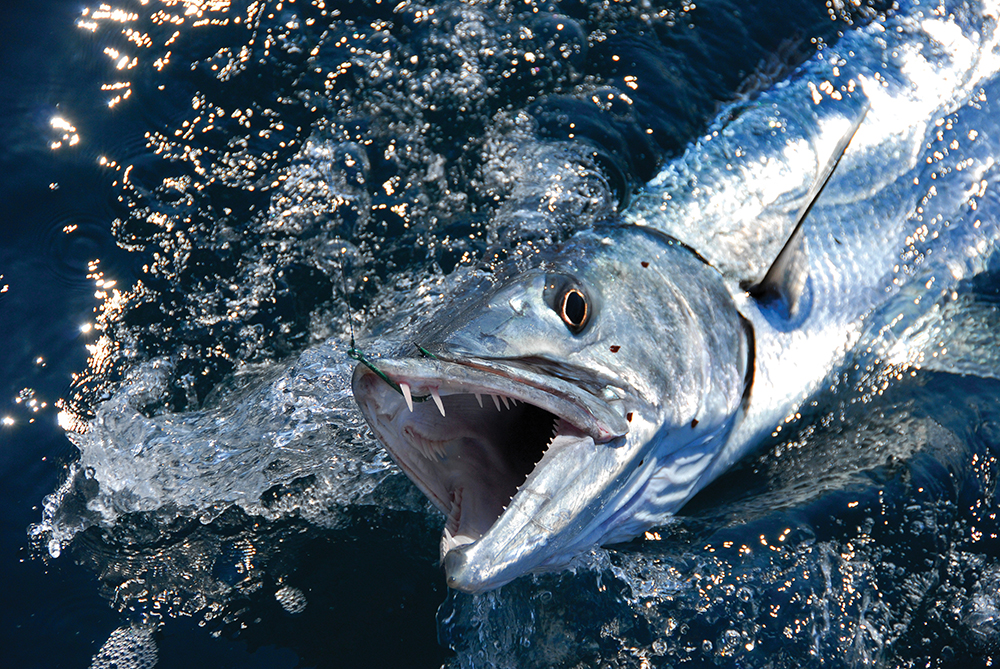 Last summer, after a close encounter with an epic barracuda off Port O’Connor, I was reminded of my various run-ins over the years with this cruel predator. (If it’s fair to label one species meaner than the next…since even trout are pretty hard on live shrimp). Off the Texas coast, ‘cudas lurk around virtually all offshore platforms and sunken wrecks sitting in blue water. I’ve never heard of a ‘cuda reaching the jetties in Texas, though it could happen if blue water stacked up there for a few days. But platforms out there in our state waters? No problem.

Back to my gorilla ‘cuda story. We were drifting next to a platform within sight of the beach, fighting big Spanish and also some 25-pound kingfish, all on 12-pound spin tackle. Our supply of spoons was dwindling – we had no wire, just 40-pound fluorocarbon leaders. Amy and I both landed 25-pound kings, which took us around the boat a few times.  Several four- and five-pound Spanish mackerel were also brought in and kept. Finally, on that borrowed boat, I found a short wire leader and circle hook, and soon attached it to a bigger Ambassador 7000 reel filled with heavier line. A live pinfish was attached and tossed out there, and within a minute that rod took a deep bend. It felt like a bigger kingfish, so I put on the fighting belt.

The fish stayed deep but I worked it closer, and we assumed it was another kingfish of the same size. Suddenly there was a big thump on the line, which then began to tremble. The fish now came up easier. Sure enough it was an identical four-foot kingfish, but bitten almost in half, the tail end hanging by a thread. We peered down in the murky blue depths, and spotted something bigger, maybe seven feet long, it had to be a shark. It was cautious, wouldn’t grab the kingfish again, so I lowered the near-lifeless king deeper. Sure enough, the big shape eased up for another bite. I cranked the kingfish to the surface, and this massive ‘cuda followed, chomping down and churning the water. It’s length was shocking; I’ve scuba dived for many years and never seen anything like it. On top of the water it was easily 6.5 feet, and likely weighed 80 pounds or more. And he was hungry, tearing the kingfish to pieces. Magnified underwater through a mask, that ‘cuda would have looked over nine feet long, which is not something I ever care to see.

We were shocked, but Amy somehow managed to take pictures with her cell phone. This ‘cuda was cagey, and each time had to be lured back to the surface for another bite. He seemed to think that our kingfish belonged to him. We could only surmise the huge ‘cuda had seen a number of boats and hooks during its long life. Finally, I picked up the remainder of the kingfish, posed for a picture, and tossed it overboard. What I should have done, is chop off a couple pounds of kingfish meat and lower it back down with a hook attached. Down deep in the dim lighting, perhaps that cagey giant would have grabbed on. Without even trying, I’d missed a new state record by as much as 30 pounds, since the present state record is 52.8 pounds and five feet, three inches long. Also caught the first week in September.

Maybe it was all for the best. Somewhere on our boat there was maybe a two-foot hand gaff, or perhaps none at all, and landing that beast might have cost us a hand or an arm. ‘Cudas have been known to jump into boats and maim people for no reason, and this was one fish we didn’t want to provoke. I like to think he’s still lurking out there now, waiting for our next trip. His presence offshore reminds me of a line from the movie Platoon: “Somewhere out there is the beast, and he hungry.”

Bigger ‘cudas are out there. Years ago, Clear Lake’s Tom Gibson, now retired from NASA, who has held a dozen world and state record fish (mostly tarpon), saw a ponderous ‘cuda while fishing in Gabon, West Africa where the big fish bite. “It grabbed a trolled Magnum Rapala. In that murky water, we first thought it was a crocodile, it looked eight feet long. Near the boat, it bit through my 200-pound mono leader.”

Years later in 2013, Tom was back in Africa, again in Gabon,  trolling Rapalas for record tarpon. That’s when a 102-pound, new all-tackle world record ‘cuda hit and was landed. And with the very same tackle, though this time the leader wasn’t cut. It was a Guinean barracuda, slightly different with chevrons (side stripes) rather than the black spots found on ‘cudas on our side of the Atlantic.

Gibson told me that ‘cudas in the Gulf of Mexico are thicker than Guinean ‘cudas, and if my fish was over 6.5 feet long, it may have exceeded 100 pounds.  We’ll never know, unless somebody finally catches that big devil next summer. Or even this winter further offshore, where ‘cudas migrate in colder weather.

‘Cudas are passed over as a food fish in some regions, and welcomed in others areas.   Why? They often carry ciguatera poisoning, after eating many small algae-eating fish that live among coral reefs. The bigger the ‘cuda and proximity to coral, the more likely it is to carry this toxin, which when consumed can poison people with a list of unpleasant symptoms. There is an ongoing advisory against eating ‘cudas from around the Flower Gardens reefs about 90 miles offshore of Galveston, however coral also grows on Gulf platforms. In addition, ‘cudas are bluewater wanderers spanning the globe. Perhaps 20 years ago, several Texas anglers were stricken by this toxin after catching and eating a ‘cuda from state water rigs off Port Mansfield. Cooking doesn’t neutralize the toxin and there is no cure, but death at least is rare.

The barracuda is more welcomed by deep-drop anglers, who require fresh, tough cut bait when bottom fishing 500 to 1,000 feet down. That’s a long ways, and they want bait that will really stay on the hook. The trick to targeting ‘cudas out there is to fast-troll past a bluewater platform, catch a couple of ‘cudas, and secure fresh cut bait for the trip.

Except for heavy fishing pressure in Southeast Florida, ‘cudas are doing quite well. They’re an extremely versatile fish: In the Caribbean I’ve seen them parked in three feet of water under piers, or a mat of sargassum weed against the shore. They stack up inside offshore Gulf platforms, or shallower navigation towers off Florida. And they lurk on the vast, sandy flats of The Bahamas, hoping for a bonefish meal. They also wander in deep, blue water.

And ‘cudas are so mean, they don’t even like each other. When I was 16, I was invited to fish three days and nights off Key West in my uncle’s 18-foot boat.  We stayed fairly shallow but caught lots of fish – they were plentiful back then. However, it was the local ‘cudas that impressed me most. We hooked a few that were three feet long, and these were often cut in half by five-foot ‘cudas weighing at least 40 pounds, and   right beside the boat. It was savage action in clear water, for someone used to fishing Sabine Lake. I was so impressed by the area’s action and beauty, that we trailered small boats from Port Arthur to Key West nearly every summer for the next decade. We had lots of adventures out there, and the ‘cudas we saw would scare the bejeebers out of most people.