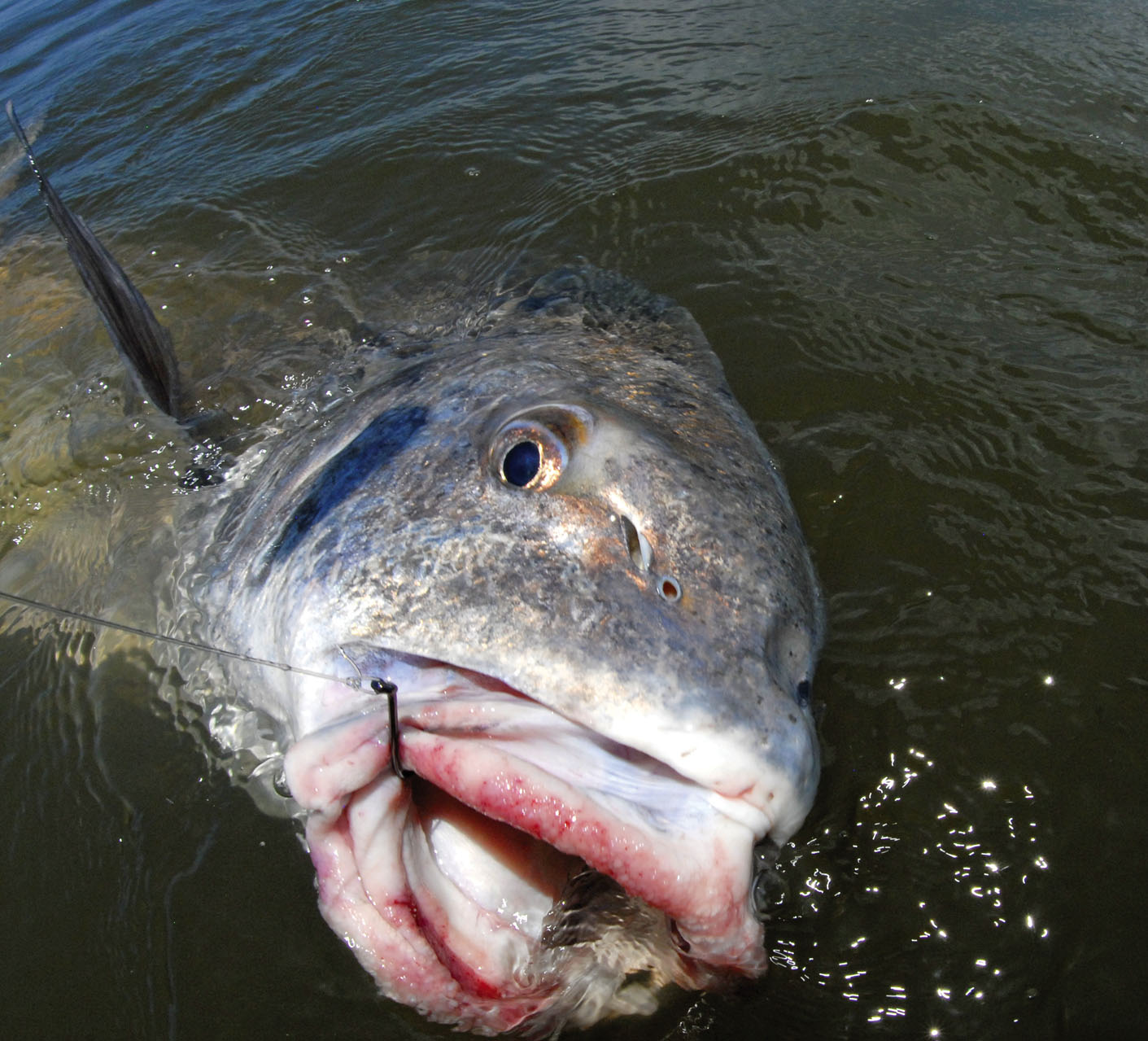 A sharp circle hook easily hooks into rubbery drum lip, and they’re easily backed out with pliers before releasing the fish. Just don’t set the hook—instead reel fast, and get that rod bent double.
Last year I finally realized black drum are a year-round fishery in Texas. Not just in February/March, when many anglers target them from shore. Visit Galveston's Seawolf Park on a Saturday in March, and see if the crowd isn't slinging big chunks of blue crab, hoping to fight 50-pound drum. For many, it's the biggest fish they will ever catch, at least from shore, thanks to the drum's habit of congregating and spawning in deep water within casting distance of dry land. While doing so they have a greedy appetite for blue crab, which they easily crush and swallow.

But a year 'round fishery? It certainly seems so; Texas' healthy population of bigger drum have to make a living somewhere, and because they're protected from harvest, they're cranking out a great many smaller "puppy" drum that are quite tasty. Drum feed only on shellfish, thus their good tasteat least until they grow bigger and much tougher. Sure, we catch accidental drum at the jetties, in the bays, even Gulf platforms offshore. The odd drum will hit a gold spoon, or even a Rat-L-Trap lure. But if you really target these fish, they can be found. By the daily bag limit of five. Maybe it's time to target drum, and give trout a break.

Captain Curtiss Cash has been catching black drum during much of the year. He starts out by hammering big drum every spring around Port O'Connor. Medium tackle and blue crabs are the ticket when the big drum bite. You never know, that next fish might surpass the state record of 81 pounds. If you measure one longer than 52 inches you can legally keep it, since it might exceed 81 pounds and be a record. Just be aware that a drum of that size will scarcely be edible, unless you're marooned on an island and run out of seagull eggs...But if a monster drum hits, you'd better be ready. It's nice to catch monster fish in completely sheltered water. Sometimes, Curtiss parks his boat against the shore; it's the deeper water depth that counts with big drum.

During much of the remainder of the year, Curtiss' clients sometimes take a break from redfish and trout, and pursue limits of legal 14- to 30-inch black drum. He says these drum fight as well on spin gear as redfish for their size, and they're just as tasty. (Some say better.) These smaller drum school deeper than the typical flats scenario for redfish, and may only show a muddy patch of water. If his clients can't see the fish, he lobs a bait with marker cork into the center of the school, and then everyone gets hooked up. A favorite tool here is the Vudu Shrimp plastic bait; he's watched black drum rise from the bottom and grab these shrimp. On days when trout and reds are slow, his crew is bowed up over a school of drum, whooping and hollering.

"If you have good, light, 12-pound spin tackle, pitch a plastic shrimp out there about 60 feet," Curtiss says. If the water is clear and 5-6 feet deep, drum will see the plastic shrimp and rise to the surface, they can see it. They seem to congregate in deeper holes. Scrap fish go after the same bait; you need to pinpoint a drum school and pitch right in there. Vudu shrimp are really good here."

For several years now Curtiss and another guide have caught limits of tasty puppy drum at the Matagorda jetties, a technique discovered a few years after I guided there. Sure, you can catch redfish and sheepshead in those rocks, but drum stay deeper, right at the base of the rocks, roaming the sand bottom. At the Sabine jetties, we caught a few puppy drum on gold spoons and Rat-L-Trap lures. There, drum certainly seemed to feed higher in the water column than drum back at the Matagorda jetties.

Targeting oyster reefs is another key for black drum. They're quite fond of young oysters, crabs and shrimp hiding in an oyster reef, so try these spots when possible. Unfortunately, bumping a baited hook through oyster shell is a dicey proposition; it's easy to snag bottom. Maybe this is why more drum aren't caught on the reefs, the tackle toll is too high. Best fish a couple of feet from the reef over mud or sand. These same reefs are host to pinfish and other bait-stealers during summer, so soaking shrimp gets expensive. Even a half-blue crab can be picked clean of meat during warm weather, when the small critters are prevalent. But not always.

Late last May we fished hard for flounder around commercial docks that had been good the previous year. This time they were mostly gone, fished out. To relieve the boredom, I set out a big spin outfit with half a crab. Maybe a redfish would pick it up; we were in a tournament, after all. The wind was gusting and we were happy to be in protected water. (The jetties were almost submerged in whitecaps). Action finally arrived, in the hulking form of one huge black drum after another. Three casts in a row I fought them standing up, the boat actually pulled by these fish up against the pilings, the 25-pound line sawed-through. These fish couldn't be stopped...Then I spotted a big spool of 40-pound Ande line in the boat, often used as leader. So, I wound 80 feet onto the spin reel and tried again.

This time I was ready, no more Mr. Nice Guy. I wasn't leaving the rod in a holder for the next drum to grab the crab and sneak closer to the pilings, where he could make mischief. Soon enough there came a tap-tap and then a ponderous weight. The chemically-sharpened circle hook bit into drum lip and the fight was on. It was "just me and him," as our fishing mentor Louis Mingle used to say in nearby Port Arthur. The drum and I were confined to only a small patch of water that was piling-free, the water 20 feet deep. I set the drag pretty tight and then jumped around in the boat from seat to seat, kicking the boat away from pilings each time the drum pulled us in there. I palmed the spool for maximum lift, then gave up five or eight feet of line when the drum made a surge. A difficult five minutes later, a 44-pound drum surfaced and wallowed. A dozen feet of very hard Ande line was ripped and frayed, but somehow held. Drum aren't the strongest fish in the world, but just try catching one on spin tackle, and not letting him swim more than a dozen feetit was almost like fighting a ling inside a Gulf platform. Fishing buddy Shmo sat in the back of the boat completely speechless, for once. Anyone hooking that drum and just sitting in the boat, sheepishly reeling, would have had their line cut within seconds by the pilings. Instead I scooped up that beast with the landing net, careful to lift it into the boat with the net handle pointed straight up. Big drum have broken many a landing net, when anglers tried to bail them into the boat.

As always, blue crab was our ticket. Don't waste your time targeting big drum without blue crab. I did talk to a snowbird in Port Aransas who in March catches big drum on "sea lice," which is the nasty-looking mantis shrimp that grows to at least six inches long, but he says other sea critters chewed up the same bait, so it's not really an exclusive drum bait. Half a blue crab will stay on the hook a long time, and at least in chilly water during February/March, won't be picked at by small croakers and pinfish.

While the water is still chilly, it's more efficient to just find a seafood market that carries crabs. Demand live crabs if they have it, and pick out a dozen of the biggest, meanest ones available, if they're (preferably) alive, and keep them in a cool, damp place before heading to the coast. If April arrives and you're still after big drum, a couple of baited crab traps set out for a couple of days, in a bayou where storms can't reach them, can be very useful. By Memorial Day, of course, blue crabs are common. Last year we caught big crabs off the side of our boat, while also hauling in big drum. I landed 11 mongo drum that weekend, and this while often casting jigs for flounder. For two days after the tournament, I fished just up-current of a nearly-exposed oyster reef marked by a pole. It was an incoming tide.

The big drum were so thick at the reef, I could only set out a single spin rod. I fought them for two hours while three other boat crews nearby, crab-less, sat and glumly watched. Hooking those big puppies 30 yards out in open water, with 25-pound line, made for some long fights. Hard work: It became a chore to hoist them out of the boat after de-hooking, and a final heave-ho back overboard.