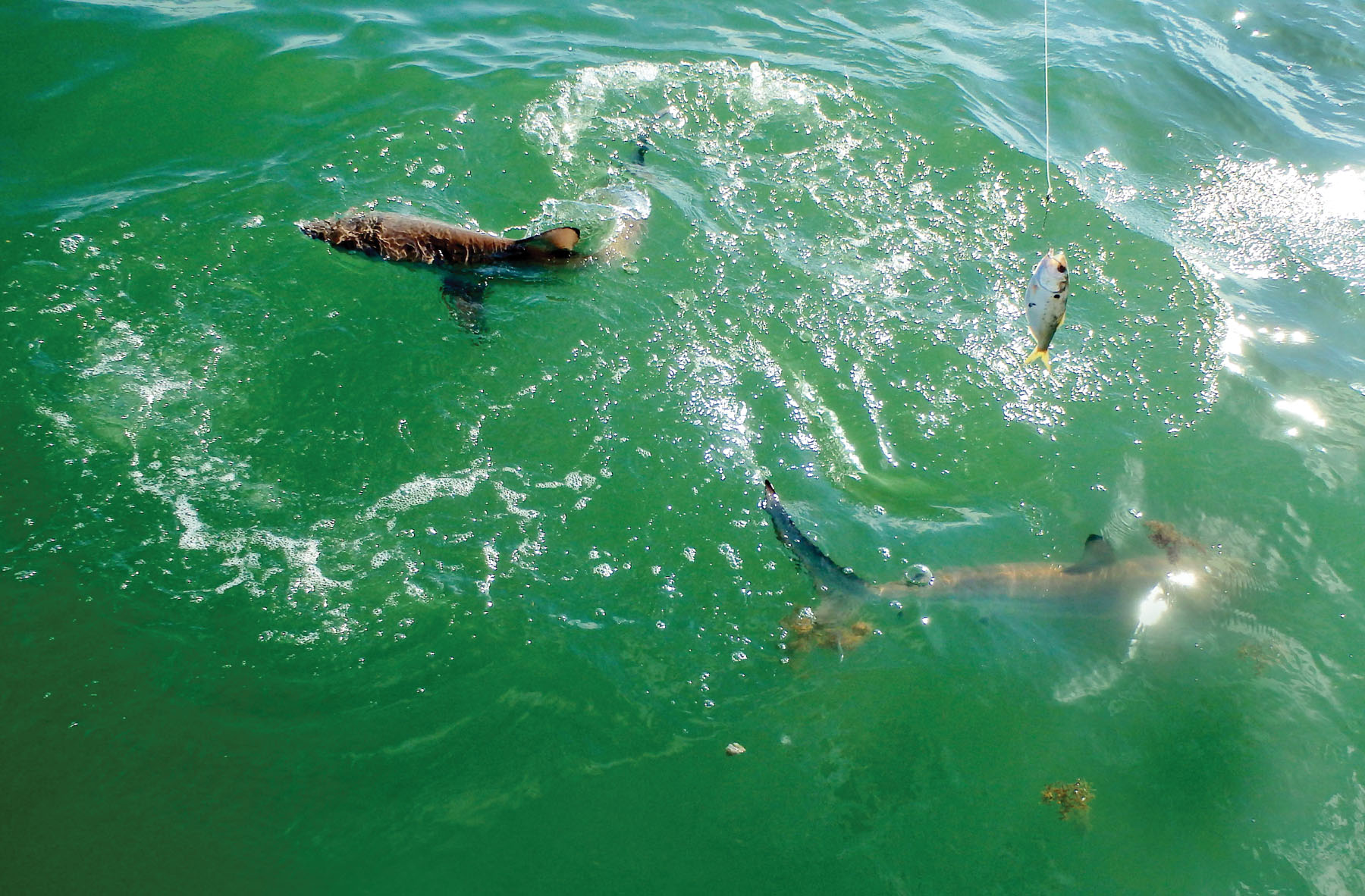 Blacktips are not shy and seem fearless around the boat. These are being teased with a dead shad on a hook.
Over the years I have not exactly been a stranger to blacktip sharks. The upper half of Texas and perhaps all of Louisiana has an amazing population of these sharks during summer. You can hardly avoid catching them. They're energetic, strong enough to bust up tackle, and good to eat. Much more appealing than the sneaky bull shark that steals hooked fish even in muddy water, wanders far up rivers, and is implicated in a number of human deaths. The bull is strangely sluggish on the hook, at least all of the four-footers that I've caught.

Not so the blacktip; this character will sprint and jump and try to empty a reel. They also have a cruel set of teeth you don't want to mess with; they're easily capable of removing fingers. Fortunately for Texans, they also don't mind murky water. Brown or murky green seems best. For this reason I think the upper half of the Texas coast carries far more blacktips than the clear water found further south. They may also favor the upper half of the coast because summer menhaden schools concentrate along that very same stretch.

Out there within sight of summer bathers, blacktips are hard on the menhaden. But they're also a versatile shark, wandering into muddy bays and even crowding around shrimpboats offshore. If you see a hundred sharks behind a shrimpboat, they're blacktips.

Friends of mine have seen blacktips crawling over the tops of one another, eager for handouts when the shrimpboat crew begins shoveling bycatch overboard. It's amazing action, though one many boaters will turn their backs on, saving their energies for other fish.

But heck, if you're after a fish fry, you can do worse than a 30-pound blacktip.

We once held a big fry for 30 people who were visiting the coast. And blacktip was on the menu. That summer weekend the wind was blowing and the entire bay was a chocolate mess; there was no way we were going to feed a crowd with trout fillets. Some place in town had boxes of frozen fish fillets, (restaurant product), and the price was right, but they had Chinese markings all over the box and we weren't sure about the quality. Much less the species. So, we saddled up with Jimmy Crouch and artist Sam Caldwell, and plowed offshore to the first rigs in state waters. That's where the blacktips–small ones, maybe 10 pounds–gave us plenty of action under corks. Back at the house we admired the 30-inch fillets, and then chunked them up for the frying pan. The crowd was impressed with the final result. Some of them had seen the whole fillets and we told them they were trout, which raised a few eyebrows. It was a great fish fry.

But while catching them, don't toss those sharks in the ice chest and then stick your head too close later, the ammonia will send you reeling. Get the skin off those sharks back at the dock, and the white meat smells pretty much the same as trout. If the bag limit is tight on sharks these days, aim for a 30- or 40-pounder (ling size) if you have a crowd to feed.

Blacktips get mixed reviews from anglers, but in Port Arthur, Mike Spencer has a thing going with these sharks. He takes a boatload of college-age gals out there, who have all become big fans of the fighting blacktip. The local population of sharks is very dependable during summer.

"We use thin, sharp circle hooks, and just leave them in the sharks," says Mike. "No use risking fingers unhooking them. The gals think it's pretty sporty and they're young enough to battle these sharks most of the day. We catch some big ones, six feet at least, and a shark like that will go nuts when it feels the hook."

Blacktips are good at busting up tackle too, breaking the line with tail strikes or chomping on steel kingfish leaders–sometimes right through them. But Mike only uses one foot of wire leader, and then six feet of 125-pound mono shock leader. He says the circle hooks always get them in the corner of the mouth, and most often you don't even need a wire leader.

"I keep a bundle of stand-up rods with TLD-15 reels in the boat, " Spencer says. "The gals wear rod belts for protection. Some of these sharks will try to spool a reel; they have amazing energy. Some of them have made runs of 150 yards."

He says that sometimes the sharks and jacks are waiting around a shrimp boat that has stopped to nap during the heat of the day. "We check them all until we find fish. Some shrimpboats are anchored, or tied up to rigs, even drifting. Find the right one, and it may have hundreds of big sharks, jacks, kings and a couple of ling."

"When a shrimpboat is pulling his nets, we run parallel, upwind of them, then slow down and stop just outside of their upwind outrigger," says Spencer. "We drift into his muddy wake with four dead pogies. Sometimes the sharks are there immediately, or we may wait 10 minutes before getting a hit. We sometimes put a chum bucket in the water. If the sharks are there they will leave the shrimp boat and stay with us until we get tired of catching them. These sharks weigh from 40 up to 140 pounds, and we release them all. We use measurement charts off the Internet for weight estimates."

"These sharks are not always behind the boats. And we may stop behind six to eight shrimpboats before we find a fish. But sometimes there are hundreds. When the shrimp boat stops to pull in the nets on deck, it can be awesome. The water needs to be at least a clear green or clearer. Poor visibility or muddy water seldom works. But we are not going far from shore. Most of the time we're one to six miles out."

With this kind of savage action, Spencer's crew is obviously not using Mickey Mouse tackle out there.

"We use 40-pound line on our reels. And size 7 to14 circle hooks with about six feet of leader. This makes it easy to leader and hold up a fish for pictures. The sharks seldom cut the leader because the circle hook is always in the corner of the mouth. I seldom use wire leader but when I do, it's only about a foot. And this is when there aren't a lot of sharks that day and we don't want to lose even one."

"We use 5'6" stand up rods and rod belts. Leave the reels in gear for the strike. A six-foot blacktip is going to run off 150 yds of line on the first run. Many will jump two or three times, sometimes five feet in the air, and spin. They can be as thrilling as a tarpon or any other gamefish. Especially for someone who has never caught a fish over five pounds. And you can catch all you want in an afternoon, unlike tarpon or other game fish."

"We do notice strikes from sharks are more common on the brown- green water edge of a shrimp boat's path. The cleaner water is best. But we do occasionally catch a shark in muddy water around the jetties or along the beachfront. We can almost always find blacktips. And then maybe one BIG bull shark a year, usually trying to attack our hooked blacktips when alongside the boat. And twice we've hooked big tigers," Spencer says.

"It's become huge fun for the younger fishermen. Most people never catch a 100-pound fish that burns off 100-200 yards of line in one run. That's fun with any kind of fish. And in the calmer summer months around here they can be easy to find. They also stick around into October," Spencer says.

One word of caution: Be careful around these sharks. It's best to leave them in the water, and don't try to save a cheap circle hook before releasing them; it isn't worth it. The cost of rebuilding fingers or a hand is very expensive.

We've had a good record with these sharks, but had one close call. We tried to tail-rope a five-foot blacktip and drag it backwards behind the boat to drown it, before bringing it home. Quick as a snake, it bent completely around and chomped the air near Amy's elbow. So, we abandoned that landing technique. I picked up a pole spear in the boat and shot the shark through the middle gills, which is where the heart is. The shark went limp, and we dragged it aboard.

Gaffing a blacktip will really give them some bad attitude, so be careful. Capt. Howard Horton tried to unhook a gaffed three-foot blacktip at the Galveston jetties, and very soon had to have three of his fingers sewed back on. Along with a week of hospital stay and morphine.