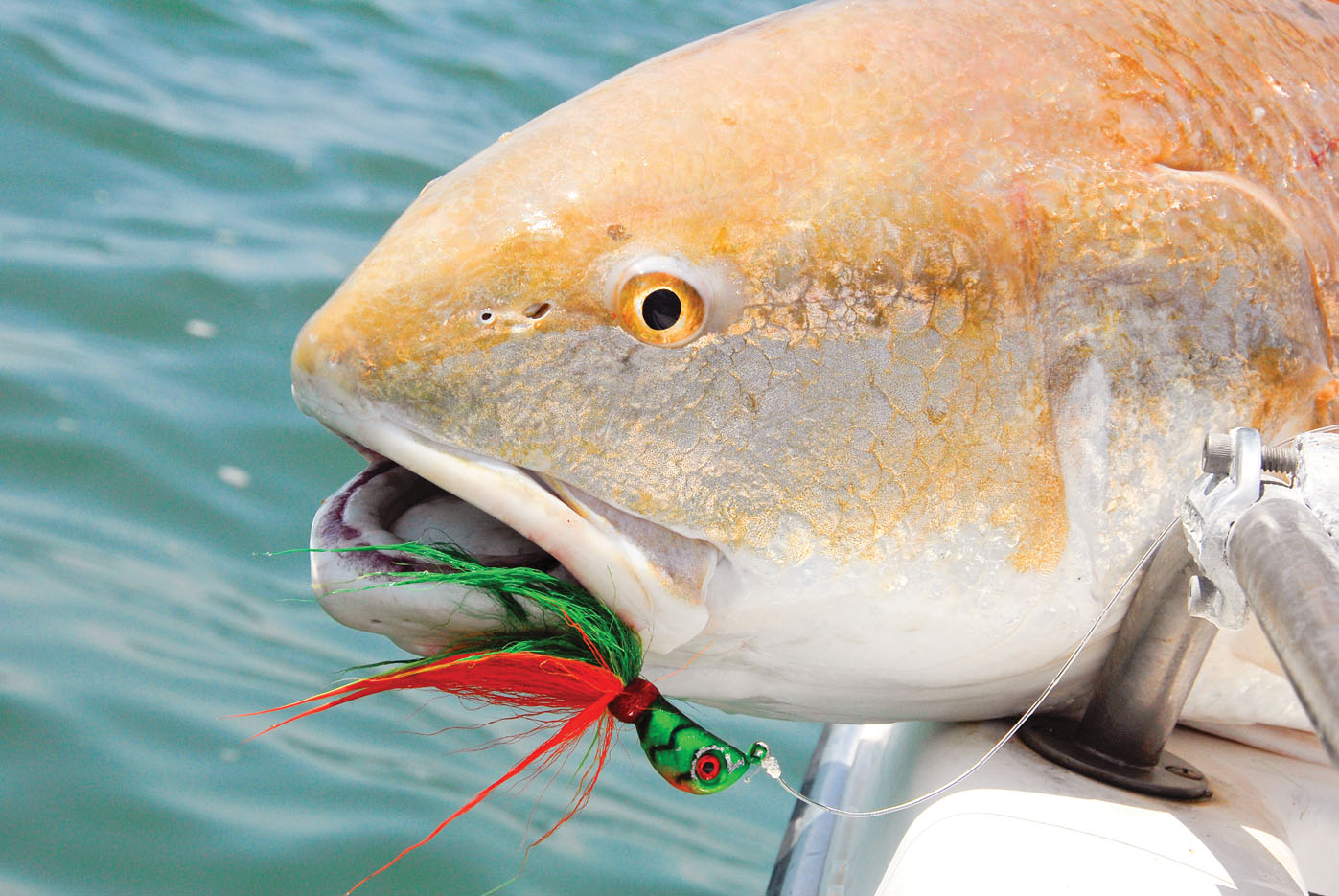 Close-up of big redfish in Matagorda Bay, caught on a jig that looked good enough for reds on the surface that were busting small crabs.
Labor Day can be considered the peak of bull redfish season, because they're massed in large schools, ready to spawn and hungry for mullet. These huge reds prefer jetties and passes for such duties. That's when a lowered chunk of mullet is instantly grabbed, because whatever they're doing down there, it gives them quite an appetite. At such times there's no use in setting out more than one rod, because multiple hookups can turn into a mess. Our method was pretty fast, and we didn't wear these fish out much, grabbing the 200-pound mono leaders and horsing them in. One afternoon we landed 46 without pulling anchor. When our bait ran out, the two guys, both teenagers, never wanted to see another. They were hurting, and so was my lower back.

We have caught hundreds in this manner over the years, too many to count. Mostly during daytime hours, but also on night trips when we were younger and didn't mind fishing until midnight or so. Or even camping overnight in the boat. The vast majority of these big reds were caught with fairly heavy tackle, Penn Senator 4/0 reels with 50-pound line. That was a little heavy for these fish, but it was easy fishing if a current was running. Set out four rods with at least eight ounces of lead and a great big circle hook, and heavy leader that could handle tarpon, and then sit back and wait.

When a rod doubled over, you set your drink down, wrenched the rod out of the holder with some effort, and went to work. The circle hooks never seemed to miss. Each fish was lifted aboard, unhooked and dropped overboard. That is, until August, 1996, when a teenage girl showed up on my guide boat with a new fishing license that carried an annual tag for oversized redfish. Hours later we tossed her 44-inch red on the marina dock and it must have been the first one seen there in decades. After boating six reds, we'd left them biting out of control. The big fish wasn't considered edible, so my wife made a Gyotaku print from the ponderous fish, and also a fiberglass mold.

Looking back to those years, we should have experimented with lighter tackle, but we were in tarpon waters and had to be prepared. Bull reds were just part of the day and we'd pretty much horse them in; our baits were practically under the boat and these fish seldom pulled more than 20 yards of line off the reel. The heavier tackle helped because there was often a strong current in Pass Cavallo in those days, not like today's anemic, pitiful flow. We were always anchored out there, so a trout rod would have been useless for big reds. And pure Mickey Mouse, if a tarpon latched on.

But there is intermediate tackle that would have been great on the slow-current days, that also offers a fighting chance with tarpon, if you can ever get the anchor raised in time, and follow that tarpon with the boat. It's a plausible scenario: There are too many slow-current days on this coast, unfortunately. (It's the days leading up to and including the full and new moons that get some real current movement).

More recently, we've landed quite a few big reds on somewhat lighter tackle, and had more fun, but without killing the fish with too-light equipment. I acquired a brace of "sailfish rods" popular in South Florida, seven-foot medium rods with spin reels, normally packed with 20-pound line. I filled the reels with sturdy 25-pound Ande line, which can still cast a good ways and take a lot of abuse. With that gear I've slugged it out with big reds busting the surface, and it was like fighting ling all day. Holy smokes, what a workout. Nine bull reds landed in a row on Matagorda Bay, from my anchored boat. They were busting the surface here and there, for hundreds of yards, and at first I thought they were jacks. I began throwing a green and orange, one-ounce jig that must have looked like a fleeing crab. It was easy to cast at the swirls, but not so easy after that when a red latched on. That's about 250 pounds of redfish dragged aboard and released. At least they were easy to land from a boat with low sides.

My toughest redfish ever was caught on an Ambassadeur 6500 reel with 20-pound line, and that fish was very tough on a hot August afternoon. I cast at a swirl near the jetties and he hit on the surface, he must have been feeding on small, migrating crabs. It was like fighting a ling with attitude; at least 20 minutes of touch-and-go in 95 heat. I fought him hard but knew the slightest miscue would have broken the line, and finally grabbed him by a gill plate and dragged him aboard.

Bull reds can also be sight-cast to each summer, when schooling just off Texas beaches. This past June during that outrageous stretch of unusually calm weather, Port Arthur friend Mike Spencer once again launched his jonboat and was out there off Rollover, not another boat in sight, fighting bull reds that were busting menhaden on the surface. Somehow Mike took the time to take a few pictures, when most of us would have been tossing topwater plugs at these ravenous fish. But then, maybe he needed a break. It was infinitely more exciting, than anchoring a boat and waiting for a bite, using dead bait on bottom. This was another instance where a big spin reel could have reached far out there with a topwater plug. Mike's crew that day was actually using heavier tarpon gear, impossible to cast, but just seeing bull reds busting the surface was exciting and he may now start carrying casting gear for this unique action. Once again, his aluminum boat put him out there where the big reds bite, while the Rollover crowd nearby could only watch. (Another salute to jonboats.)

This underscores why a boat captain should carry an assortment of tackle. You can't predict what the day will bring, and if amazing topwater action develops, what a thrill to have bull redfish busting up your topwater plugs. One of the guides who is keen on this technique is Curtiss Cash in POC, who always carries a couple of big spinner outfits with huge topwater plugs. The spinners carry no-nonsense, 65-pound braid line, which can take serious abuse. Curtiss has a spot where the big jacks cruise around in a horde of several hundred, and chunking a huge topwater plug in front of them is a sight to see, something his fishermen won't forget.

I think the upper Texas coast has far more schools of bull redfish prowling off the beach, however. There are far more baitfish schools off that stretch of beach, mostly menhaden, though they did reach POC this summer. These precious schools of "pogey" are a supermarket for tarpon, reds, jacks, blacktip shark and other fish. (Menhaden absolutely deserve protection from commercial net harvest just off the coast, something that has gone on for about 25 years too long. A big mistake in protecting the finfish resource in Texas).

If you get into bull redfish this month, there is no need to gaff these fish. A landing net may not suffice, because they're heavy. We grab them by the tail and sling them aboard. If they're too heavy for that, someone can lift on the leader at one end, while someone else lifts the tail. This is a very easy fish to catch-and-release. And a big circle hook almost always lip-hooks them. Best to go single-hook on the big plugs or spoons, however; digging a thick treble hook out of a big red isn't fun, and most needle-nose pliers aren't up to the task. And forget those frail, aluminum "hookouts."

Even lighter tackle works on bull reds, but in shallow water. I recently fished with the "Montajun" guide Capt. Marty Authement, who guides for trout in Montana each summer, and then concentrates on bull reds each winter around his home base of Houma, Louisiana. Marty has pictures of ponderous redfish, all bigger than 40 inches, taken each autumn in the Louisiana marsh – many of them taken with fly tackle. In the shallow marshes, these reds can't dive and go deep, so they run all over the marsh until they tire out. He says each fish doesn't require a half hour to land, but "close to it." So, monster redfish can be taken on whippy fly tackle, probably a 9-weigh rod or higher. He says they can be sight-cast to, though they don't actually tail like big black drum. But these reds are so big, they displace water and can be seen.

That would be a kick, catching huge bull reds on fly tackle. Much better than our old reliable method of 4/0 tackle and mullet baits.