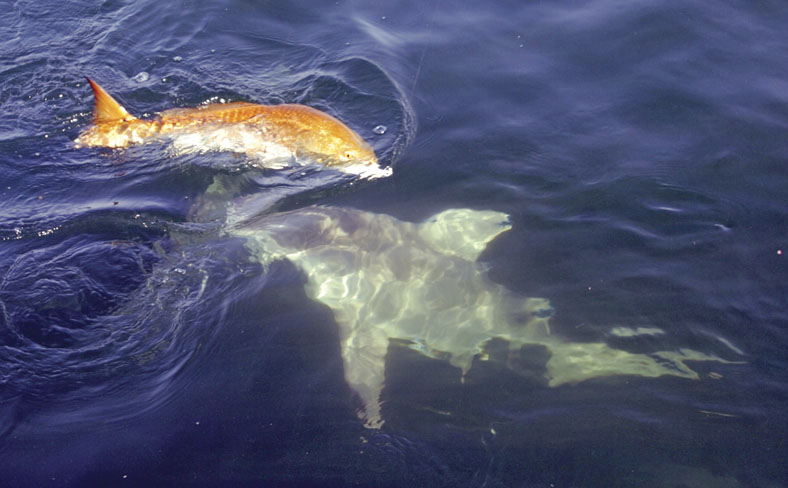 Offshore schools of bull redfish often mix with sharks and jacks and even tarpon. When a red is hooked up, big sharks can show up fast.

Autumn's bull redfish run is no myth. They gather and spawn late in summer but especially in September, which coincides with high tides and also the fall mullet run. That's when millions of these silvery baitfish gang up and migrate south along the beach and for their efforts, get blasted by redfish.

First, the spawning game: Redfish of 34 inches and bigger utilize autumn's high tides, aided on occasion by even higher water from tropical storms or hurricanes. Big reds favor jetty passes to drop their eggs, where they're carried back into the marsh to develop and grow. Biologists say that a "strong recruitment year," or a great year for new redfish, coincides with big storms. These fish carry a full appetite while doing so, and they're not particular about what they eat. September action on big reds can be fast and furious, until anglers are exhausted. If catching a bull redfish is on your bucket list, look no further than the jetties in September.

They're hard to predict on a daily basis, but catching several on a moving jetty tide, day or night, should be no problem. We have hammered bull reds on incoming and outgoing tides, but a slack tide was lame and something to avoid. At times these fish can school in the thousands, which we have encountered on a few occasions. On magically calm and quiet nights, we've heard them drumming 20 feet below on bottom, beneath the boat, and it must have been a lot of fish. So many, there was no need to set out more than one rod, because you couldn't even lower a bait and set the rod in a gunnel holder before it bent double. We were fishing bottom of course, with cut mullet and other bait, including croakers and dead menhaden, really anything bigger than shrimp. Even a small chunk of bait on a big circle hook was quickly grabbed.

Back then we used medium boat rods, Penn reels loaded with 40- or 50-pound line. Heavy mono leader, eight-ounce lead weights if the current was running, and a big circle hook that could handle even a passing tarpon. There was no need to cast–just flip a bait out there a few feet, and set the rod in a gunnel holder, in gear, medium drag on the reel. These big reds couldn't take too much line when hooked so close, and that's how we racked up the big numbers, even when the current was racing. Our best afternoon was 46 bull redfish landed and released, before pulling anchor. And that was after we ran out of mullet. We estimated that many reds weighed perhaps 800 pounds, dragged aboard and then released. This was on a hot afternoon, but we've seen the same fast action even at midnight, especially during the full moon or dark of the moon tide cycles.

It should be noted that rounding up fresh live bait with a cast net is a valuable plus on these redfish trips. Frozen bait doesn't stay on the hook as well, especially when sea catfish, crabs and critters are nibbling away. Bring a cutting board–if you pin a circle hook through the lower lip and out the top of the head of a fresh, one-pound mullet, nothing can steal that. It will eventually draw the attention of big predators, usually redfish.

I soon realized lighter gear was more fun for big redfish. We began using 25-pound spin gear with 7-foot rods tackle commonly used in winter sailfish tournaments in South Florida. Perfect tackle! Each fish gave a very good account of itself, making runs up to 60 yards. Anglers in nearby boats were hooking these 40-inch reds on lighter bay tackle, often using 12-pound line, and that meant a long and tedious fight that eventually overtires big redfish. That wasn't good; these fish are mostly released, and you don't want them floating belly-up from exhaustion.

We have also found bull reds feeding on the surface during outgoing tides on the bay side of the jetties, busting small, migrating blue crabs. We were able to sight-cast to these big fish–they looked like orange cobia in green water. During five consecutive afternoons I put 59 of these big reds into the boat, eventually straining my shoulder. Some were caught on heavier gear, by pinning a frantic blue crab to a red circle hook and lobbing it behind the boat, leaving the reel in gear. It was savage action, compared to your typical trout trip. One redfish that I spot-cast to made a longer run than the rest, spooling the big spin reel, leaving me with nothing. It was an awesome show of power; maybe a big shark had him, we never found out.

The hot lure that month for sight-casting was a green and orange bucktail jig, which perhaps imitated a blue crab. We even used topwater MirrOlures. Watching a 42-inch redfish rear its head out of the water to chomp down on a topwater plug that was a first. But digging heavy treble hooks out of thrashing redfish isn't much fun, and we went back to throwing single-hook jigs.

These same autumn bull reds are caught by surf anglers using the big, 12-foot (and longer) sticks, capable of heaving a mullet head way out there, 200 feet or so. Somehow I've never done this while barefoot in the surf. Maybe some day. I have, however, fished the old-fashioned way in huge, breaking surf, by heading for a pier when a tropical storm was in the Gulf or even imminent. (High Island pier, years ago). Guys out there were spending the night with 12-foot surf shooting spray between each deck plank. It was a wooden surf pier, and they don't make 'em any more. During a full moon it was exciting fishing, with huge waves passing by and the pier shaking. But somehow we always missed a big redfish "run" and only saw a few of these fish ever landed. There was too much luck involved, hitting a passing school that was probably headed for the nearest jetty, in this case Galveston.

And then there are today's late-summer schools of bull redfish working along the beachfront in calmer weather, most notably from High Island to Crystal Beach. These are accessible only by boat, (unless they wander in real close), because these fish usually work too far from the sand to be reached by shore-bound anglers. In these circumstances my friends and I have launched in flat surf with johnboats and gone after them, a technique that is almost too easy. Often we did so after spotting surface action on the horizon with binoculars, from the comfort of a pickup truck's cab. We'd see big blowups out there something was blasting baitfish–and it was often big reds. Jacks and big blacktip sharks mix with them, and even tarpon. That's serious action, not meant for trout tackle.

As mentioned, the circle hook is perfect for catching bull reds–these fish are almost always hooked in the corner of the mouth, making for an easy release. These big reds are Texas tough and can be released a minute or two after landing. We never use a landing net, but grab the heavier 100-pound mono leader and also the tail of the fish, and heave them aboard. After release, they might float belly-up for a short time, which means they're resting. Many times, we've seen them float and then dive out of sight. They're really a great, inshore fish for hard action, while durable enough for the public to release. Not so good on the table however, and we never keep them. Though some people do, utilizing their annual kill tag from their Texas fishing license, tagging the fish like a turkey or deer.

We've used circle hooks on big redfish since the mid-1980s, but always size 16/0, much bigger than needed. That's the best hook for tarpon, often our target fish, but we still landed hundreds of bull reds with this gear. The eye of big circle hooks are so big, you can pound one with the heel of your fist to knock the hook loose. (Instead of prying with needle-nose pliers). About one of every 30 of our big circle hooks were swallowed by these fish and when that happened, we simply cut the leader right next to the lips. We often used 150-pound Ande line for leader, and with that you can land a lot of these fish without losing any tackle at all.

For many guests on my boat, these bull reds have been the biggest fish they've ever caught. And so easy to do, when September rolls around.