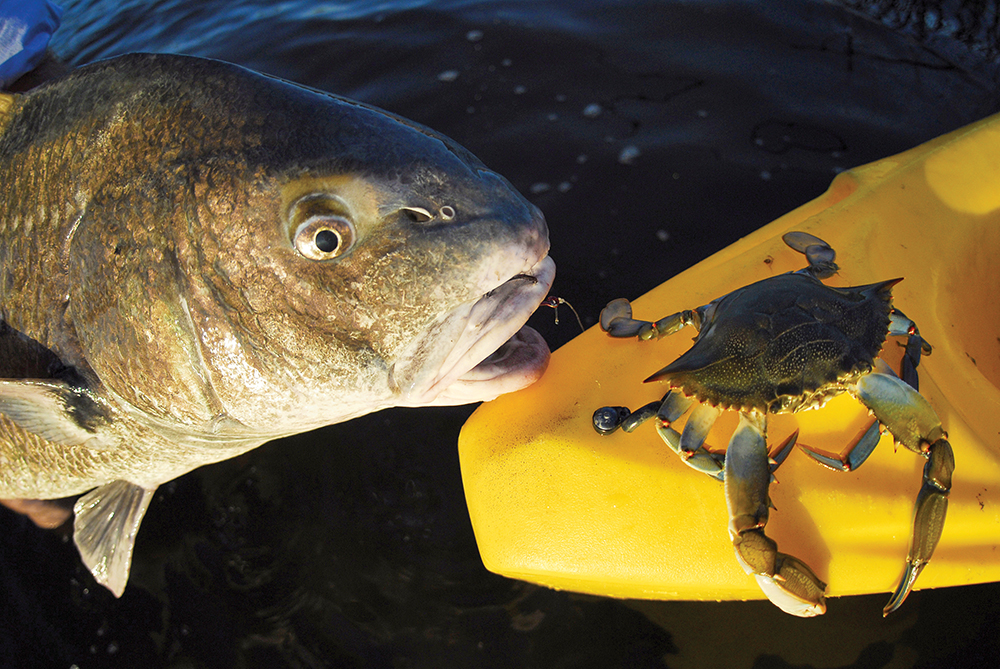 The drum clan may be one of the most diverse families found in Nature, or even on television. It’s largest member, the ponderous black drum, known to exceed 100 pounds, is somehow cousin to the (more noble) spotted seatrout and redfish. It also includes corbina, golden croaker, whiting, sand and Gulf trout, and even freshwater gaspergou. Black drum are a member of the drum family like Andre the Giant was part of the human race.

Since February marks the beginning of Texas’ annual run of spawning big drum, let’s review methods for catching this huge example of the drum family.

Way back when I lived in Houston inside the dreaded Loop 610, we were desperate to escape city life during winter weekends with the kids, and actually see some saltwater. So, we’d drive down to Galveston. After touring Colonel Bubbie’s latest line of military surplus, we’d take a look at the jetties and then stop at Seawolf Park to watch the drum fishermen. These were mostly guys without boats who had a shot, at least for two months, at catching reliably big inshore fish. With an assortment of old tackle, rusty butcher knives, cutting boards and fresh blue crabs (bought from seafood markets), they’d rig up half a crab and pitch it way out there. And then settle down and wait patiently in the weak winter sun, hoping for a serious bite. Often there were numerous hookups when the tide was moving. Over at the Texas City Dike, the same thing was going on.

Since that time we’ve caught quite a few of these big brutes, often from small boats, and not just during winter. On occasion I’ve actually targeted drum when taking out charter clients, because it turns out some folks are happy to have a 30- or 40-pound fish on the line. My photo of the retired couple shown here was taken last November and that fish was hard to lift in the boat; I knew better than to wrap it in my folding landing net. That fish ate a Gulp shrimp on the trout flats, far from any oyster reef, and was caught on 12-pound spin tackle. The angler was thrilled and next day wanted more, so I found some blue crabs, anchored over an oyster reef, and he soon caught another—though this time on more standard drum tackle, which is 30-pound spin gear with a 50-pound mono leader tied to a big red, sharp circle hook that penetrates well and is easily twisted loose for a release.

They say crawfish will work as bait, but getting live blue crabs is the ticket for reliable action on big drum. Don’t bother trying to catch those crabs in February, though. In cold water they’re mostly buried in the mud and nearly comatose. If you can let a crab trap soak in a saltwater bayou for a few days during a warm spell, then you can catch a few. More readily so in March, and no problem in April. Scoring a dozen blue crabs for a winter drum trip mostly boils down to hitting a local seafood market on the right day, usually just before the weekend. Not too difficult: We have an Asian market only a mile from our house, and the wizened old woman there on the phone always says, “You come Friday!”

I’ll show up with a bucket and pick out a dozen of the biggest, meanest male crabs I can find, and keep them overnight in the fridge with a damp cloth covering the bucket, keeping the air moist for their gills. The crabs hibernate in the fridge, but once they warm up in the boat (if the sun is out) come out fighting mad. And most come to some bad ending, when the drum are biting. The crab’s top shell is pulled off and tossed overboard for chum. Then the big knife is used to cut right down the middle, creating two baits, each with four legs. The hook is attached through the small paddle leg at the back of the crab, through the rubbery joint connecting leg to crab. You want that hook really exposed, not buried in crab shell. Sometimes a drum will thoughtfully chew that crab into a wad of broken shell and the hook gets stuck in crab and not drum. But not too often.

Some guides actually target what I call keeper-sized or “puppy” drum. Schools of these fish prowl the bays, saltwater ponds, and some of our jetties apparently all year long, and can make up a significant part of a day’s catch. Unlike sheepshead prowling above in the rocks, drum are mostly glued to sand bottom at the base of the jetties. Their mouths, after all, are built for bottom rooting. There have been drum caught at mid-depths on occasion, however. We’ve caught them at the Sabine jetties while using gold spoons and Rat-L-Trap lures, and I know we weren’t fishing near bottom. We’ve also caught drum at offshore rigs in state waters, above bottom while using spoons and jigs.

Some top jetty guides in Port O’Connor use what are literally 5-inch leaders. That  pins the shrimp bait right on sand bottom for bottom-rooting drum. I’ve seen the rigs they’re using, a 2-ounce egg weight, swivel, very short 30 or 40-pound leader, and a J-hook. They’re fishing where current is often a factor. In slack water, perhaps in a deep bayou or Galveston harbor, a standard bottom rig works well and you can use a longer leader in case of rocks, oyster reef or other structure.

The official Texas bag limit for black drum is five fish per day with a slot size of 14 to 30 inches. A single fish measuring 52 inches or more may be retained and counts in the daily bag. In waters under Texas' jurisdiction (out to 9 nautical miles offshore), it’s four black drum per day with a 15-inch minimum size.

I’m not sure how biologists decided on allowing one drum over 52 inches, except that a drum of that size could be a state record. The current Texas black drum record, at 81 pounds, was 51.18 inches long and caught in the Colorado River by Wally Escobar Jr. in June 1988. If memory serves, large black drum became protected only two months after his catch, and it was assumed the state record would never be beaten. However, about five years ago, an exception was made where anglers can keep one drum daily if longer than Wally’s. There have been no takers so far, at least from people who will catch, weigh, certify and register such a fish.

That’s clearly an opportunity for Texas inshore fishermen to find their way into the record books. If you catch one over 52 inches and it has a heavy girth, haul it home and have it weighed on certified scales. Better yet, weigh it while alive and if it falls short of 80 pounds, release it. Don’t bother trying to eat a really big drum, however. The meat will be tough, coarse, and carry a variety of internal parasites. We learned that grim lesson in Port Arthur back in high school days.

Not so with smaller drum, which often taste like redfish, some say they’re actually better. Black drum are still targeted commercially in Texas and have been for many years. During the big freeze in February 1989, I was in Port Mansfield and watched a small skiff arrive with a load of drum. I didn’t ask the guy if he caught them with the usual commercial trotlines, or if he just found those fish floating helpless in that bone-cold weather. It’s possible he just drove around and picked up a boatload.

It’s been more than 30 years since the twin freezes of 1989 and our coastal fish population has recovered nicely. (Though with flounder, not so much; it turns out they need cold winters to pull off a good spawning year class). The drum population seems to be doing quite well, with no weather events affecting them. And fishing pressure has certainly been well-managed.