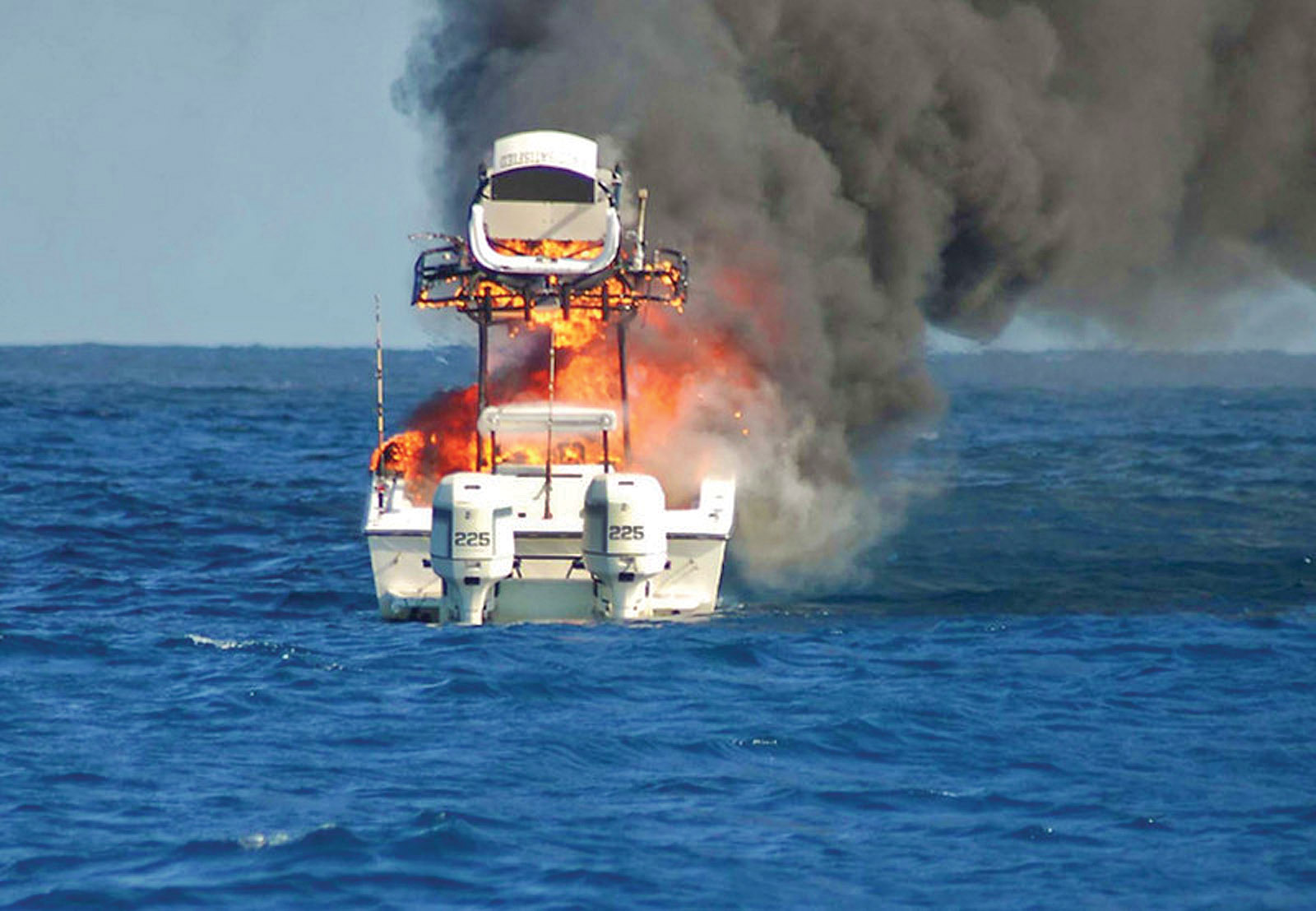 This center console erupted in flames offshore, and the crew that was saved was soon watching safely from another boat just upwind.

Fire on the boat often has grim consequences, if not for the crew, then the vessel itself. The sudden fire and sinking of Let it Ride, a 50-foot Bertram heading offshore during the Port Aransas Deep Sea Roundup tournament on July 14, came as a wake-up call to many boat owners. The thought of young crew members jumping for their lives 35 miles offshore that day has left fishermen uneasy…how could this happen with a modern boat running with safer diesel engines?

As described in the Port Aransas South Jetty, the fire came without warning and may have been electrical. Heading offshore, the crew was anticipating a day of tournament fishing, but the salon began filling with smoke. The crew donned life jackets and the smoke grew worse. Another tournament vessel, Hideout, was apparently on the same course and soon pulled up close by. The Bertram’s crew then jumped overboard and spent only a few minutes in the warm Gulf before being pulled to safety. Flames erupted behind them, and they watched Let it Ride burn and sink very quickly.

Further details for public consumption were scarce, as they generally are soon after a boat sinking, pending a Coast Guard report and insurance claim. You just don’t see published, finally detailed reports of marine sinkings, except sketchy coverage in the media. Yet the Gulf bottom is littered with wrecks from the past 50 years, weekend misadventures from the recreational fishing industry.

Boats are considered almost fire-safe these days, and even bay boats have stopped using small, external fuel tanks. I’ve never actually witnessed a boat fire during my too-many years on the Gulf, and that can lead to a casual attitude that is probably fairly common. Sure, I have life jackets and one fire extinguisher. But how accessible in a quick, bewildering fire? What would I do if fire suddenly erupted—fight it with the extinguisher (if in reach), or jump overboard? Would the boat soon explode like in a James Bond movie? Hard to say. All you can do is keep a good extinguisher strapped within reach of the helm, where you won’t have to take even a step to reach it. Seconds count; spray down a flame within 10 seconds, and you might save the boat and a long swim. Electrical smoke pouring from the walls of a billfish boat salon, while offshore, would seem beyond remedy, however.

One obvious fire hazard on boats is transferring fuel. Billfish boats carry sturdy, 200-gallon bags of diesel on the stern deck that can be pumped straight into the tanks below, then folded and put away. I’ve also seen them carry 30-gallon plastic tanks tied to the bow rail, though wave impact up there can be considerable in bad weather. I haven’t seen how they maneuvered those barrels back near the stern for transferring. During our long kingfish trips we used 30- and 15-gallon plastic drums, the latter easily lifted by one guy, and two people to lift the 30. We simply set each barrel on top of something and siphoned with a one-inch clear hose, preferably in calm weather. Nobody smoked in our crews, so we didn’t worry about fire. One day in two-foot chops a careless crewman let a drum topple over, spilling gasoline on deck. It apparently drained out the scuppers, because spilled fuel below decks might have found a spark from an automatic bilge pump. That could have triggered a fire that an extinguisher would have been hard-pressed to stop. In which case we should have kept those life preservers within reach, if not wearing them. But we were fearless in those days, and guardian angels followed us around like seagulls.

Class A involves combustible solids such as wood, paper and cloth, or anything that leaves ash upon burning. Class B includes flammable liquids that can explode such as gasoline, oil and kerosene. Class C covers electrical fires. Class D involves combustible metals such as magnesium. While water can be used to extinguish Class A fires, it should never be used to extinguish gasoline, oil or electrical fires as it can make them spread.

>There are two varieties of dry chemical extinguishers appropriate for boat fires. These include sodium bicarbonate, an alkaline material, for class B and C; and, potassium bicarbonate, purple "K", also alkaline and for class B and C fires. Dry chemical extinguishers are not effective on class A fires. While they often leave a messy, corrosive residue and are difficult to clean, they are more effective and easier for a novice to use.

Cooking on the Boat

While open fires are highly frowned upon in boats, there are exceptions. Sailboat crews are used to a month or more on long ocean crossings, and that’s why they carry stainless steel charcoal grills that hang over the side. In a pinch, they can instantly dump hot coals overboard. I’ve seen these grills on a few powerboats, used by fishermen determined to have a hot meal—even during closed snapper season. Apparently it’s perfectly legal to consume your own fish offshore, regardless of species. (Just don’t bring extra fillets back to the dock). Most anglers prudently refrain from cooking on the boat and stick with venerable favorites like Vienna sausage and my go-to offshore favorite, mustard sardines on crackers.

Back in our youth during those three-day kingfish tournaments, we stayed offshore the entire time to save fuel. But we grew weary of cold food, and so one year carried along an Old Smokey and charcoal. Our Mako center console wasn’t considered safe for a barbecue, so we climbed a small platform 60 miles offshore and set up the Smokey, which soon spouted 3-foot flames before settling down. We were so proud of the butterflied scamp grouper on the grill (covered in butter and Tony’s), and also the fresh Shish-kabob, that we took pictures. The Gulf was glassy and the meal exquisite. However, we later found out that open flames are bad for gas production platforms. A friend familiar with the industry said many offshore platforms leak unscented natural gas, that can’t be detected by fishermen. He said he hoped it was a windy day during our offshore repast. I told him the Gulf was glassy after a small shower had passed. He just stared in amazement.

Platform gas leakage in calm weather is something to consider, even when cooking on a boat off the Texas coast. Anchored over a snapper rock or drifting is likely a better venue than cooking alongside a platform. Years ago one fishing boat supposedly set off a rig fire, just with the spark from their outboard motor. The Gulf was so calm, a massive plume of invisible natural gas hung over the structure. There was a hellish flash and the two fishermen dove overboard, but raincoats they were wearing melted in the fire. Their injuries (or how they in fact survived) were never fully explained.

Cooking fish on the boat without fire is far safer by using a microwave, but only billfish boats carry that option. However, even small boats can carry a bowl filled with a ceviche pre-mix made at home of lime juice, cilantro and other favorites; chunks of fresh fish are added when caught.

I’ve lately been thinking how we used to make tasty ceviche on our multi-day, bluewater trips offshore, without fire on the boat. Why not try it on today’s 12-hour trips? You can fish while the ceviche “cooks,” and there’s no flame on the boat. In the spirit of no-fire cooking offshore, I’ve included a tasty ceviche recipe, where lemon and/or lime juice cooks fresh fish. It’s quite tasty and far safer than a pre-wrapped sandwich from the nearest Stop-and-Rob, processed perhaps two months ago in New Jersey.

Dash of Tabasco or a light pinch of cayenne pepper

In a non-reactive casserole dish, either Pyrex or ceramic, place the fish, onion, tomatoes, chili, salt, Tabasco, and oregano. Cover with lime and lemon juice. Let sit covered in icechest for an hour, then stir, making sure more of the fish gets exposed to the acidic lime and lemon juices. Let sit for several hours, giving time for the flavors to blend.

That first bite of good ceviche offshore will make your eyes roll back in your head—and there won’t be an open flame in sight.