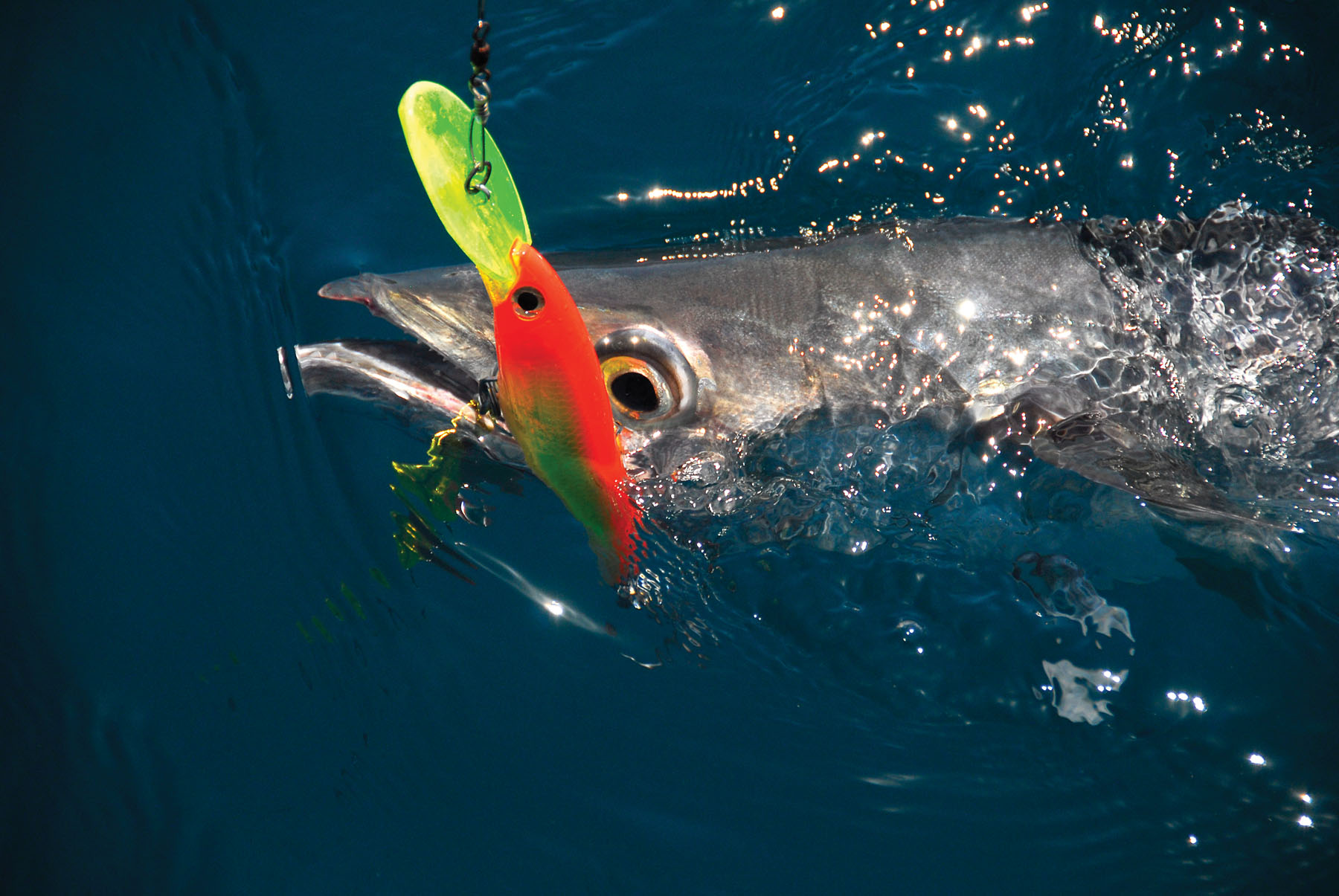 With $4 dollar fuel reaching permanency, kingfish anglers now face the dilemma of how to catch these fine fish without breaking the bank. Blasting way offshore all day and trolling, without shutting off the engines, is expensive. There are alternatives, of course. Besides the obvious advantage of 4-stroke outboards, here are a few ideas for saving fuel out there, while also catching some hefty kings.

In the early years our offshore experience was relegated to stick-steering bassboats with a limited, shall we say, endurance in whitecaps. In those small vessels off Sabine, where kings stay further offshore, we returned kingless after many hard days. But plunking down $40 or $60 for a 12- or 18-hour bluewater tour-of-duty on a sturdy partyboat offered new horizons.

That's how many of us caught our first king, amidst a crowd of unshaven snapper fishermen who were difficult to work around. Their many lines offered a formidable obstacle for landing hooked, circling kings. But stationed on the bow with elbowroom for casting, or at each corner of the stern, we could (with an Ambassadeur 7000 reel) toss a live grunt or frozen menhaden away from the crowd for some screaming hookups. The snapper fishermen all had short, poolcue rods with no chance of casting near-weightless baits for kings. Our eight-foot, stout Hurricane rods let us sling baits 25 yards and more where the big kings bite. Bowed up with a smoking thumb, we ran down the deck, hooked fast to supercharged kings weighing up to 40 pounds and bigger.

Once, a friend borrowed my rod and on his first cast, fought a 51-pound king from stern up to the bow, the silvery five-footer even briefly wrapping the anchor rope. But a deckhand finally gaffed and dragged it aboard. It was a kingfish that half the SKA tournament crews back east, when the chips are down, would gladly sell their own grandmothers down the river for. Hyperbole aside, the winning Texas STAR tournament kingfish, a couple of summers ago, was caught from a Galveston partyboat by a young angler starting out much like we did. Without a partyboat, try fishing 50 miles offshore on $60 bucks a day, with today's gas prices.

Tie up to the rigs

Okay, you're headed offshore anyway with friends on a private boat. But you don't have the fuel capacity or dinero to constantly troll. Instead, tie up to a platform and shut the engines off. Bring an eight-foot aluminum rig hook. You know, those old-fashioned hooks we used before trolling rigs became so popular. With these aluminum, candycane-shaped tools, you can hook up to sketchy rig corners without lasso tricks and banging the boat into steel structure. Safely moored, toss out chum and set out a couple of unweighted baits. If the current isn't running squirrely into the wind, the chum settles astern. If the water is clean, you should see action. This is old-fashioned "Coon-ass fishing" perfected back in the 1960s off Louisiana. On a crowded weekend this can get tricky, unless you arrive early. But it saves gas.

Since the feds are cutting down hundreds of Gulf platforms in blue water, consider anchoring over natural rock formations offshore. Some of these we call "bubbling rocks," because they release ribbons of natural gas bubbles. At any rate, they attract kingfish that feed on small bottomfish living on the reef. Get a good chum slick going, and you may have all the kingfish action you can handle. Anchored up out there, we've even enjoyed topwater action, pulling out baitcasting tackle with 15-pound line, and "walking the dog" for many airborne strikes. On a good day this technique has produced more savage topwater action than a year in Baffin Bay. Higher jumps too, like 12 feet. And with the engines shut off for up to six hours.

Heading offshore for any distance means burning fuel. However, when the weather is fine, consider spending the night out there. It's two days of fishing, for the price of one-plus one night. That's something like a five-fold increase in fishing time, mostly no other boats around. You're fighting kings at dawn, while the other guys are waiting in line at the boat ramp. Most of these extra hours are spent tied up or anchored with engines shut down. After trial and error, we much prefer tying up to a lit platform at night, refraining from running around in poor visibility. At a platform, you won't be run over by a passing commercial vessel. You'll have lights overhead, to operate. With solid, storm-proof structure only feet away, and maybe even a platform crew close by if things get a little dicey.

The main hazard is keeping the boat out of steel structure, if wind or current changes. As it usually does, in the middle of the night. Make a three-day trip out there, and it feels like an entire summer of fishing. We made a number of those during the early tournament years, but you need a good reason these days to stay out that long. It also helps if someone, usually the boat owner, is a light sleeper and checks the bilge periodically for water. Multiple automatic bilge pumps are nice here when, late at night, the crew lies completely senseless after a hard day of action.

Anglers in South Florida are keen on flying kites for kingfish and other species- a technique virtually unknown off the Texas coast. Setting out up to six live baits under two kites can get pretty exciting, with all strikes right on the surface, with kings jumping repeatedly after frantic baits. It requires a little experience, a couple of kites and a couple of old Penn reels with short, stubby three-foot rods to retrieve them from the sky, along with release clips. This is drift-fishing with the engines shut down.

Upper coast anglers are at a disadvantage for kingfish, gas-wise, since kings lurk further offshore. However, jetties from Port O'Connor south see kingfish action every summer when clear water pushes inshore. The same can happen at Galveston and Freeport, but less frequently. (Sabine, forget it). From mid-coast south, it's easy to shake out a couple of lipped, diving plugs out behind the boat and cruise up and down the water change, keeping to the clear side, for schoolie kings of 12 to 14 pounds. And you might get slammed with a real bruiser. I've caught kings within 100 yards of dry granite rocks at POC, and that makes for an easy fuel bill.

If clear, green or blue water beckons beyond the jetties a mile or so, consider trolling buoys in the ship channels leading offshore. Sometimes the big kings are out there, busting Spanish mackerel. A diving Russelure or Rapala may look like a crippled mackerel, to a monster kingfish. Meanwhile, one engine is enough to troll lures.

Paddling for kings may sound absurd, but the guys down south at North Padre Island have honed their skills on kingfish and now have their own kayak tourney each August. (Winds in June proved sketchy for small plastic boats, so they moved the event to August). Padre Island has a few platforms sitting safely in state waters, where Department of Interior can't remove them, and these very structures are a kayaker's friend. Even lifeline, if a storm arrives. There are also natural rock structures a mile or so off Padre, where kingfish congregate. Yakkers use small GPS units to find these hidden structures and often report big kings in the area. Their favorite bait is frozen ribbonfish, since kayaks are slow and ribbonfish ease along in their wake without spinning. These guys get very good mileage when kingfishing, as in no fuel at all. I mean, like nothin! As Ray Charles would say.

Kevin Kieschnick's Bluewater Kayak Classic tournament is based out of Packery Channel. An event that, last August, saw many kingfish caught. Some of the kayakers, hoping to get beyond murky water (knowing kings prefer cleaner), are now rigging with small sails to boogy at least six miles offshore, during brief westerly breezes each morning, before the wind shifts back.

A new forum dedicated to these Texas kayakers who launch in the surf, is now online at: http://www.adventureislanders.com/forums/

Sailing and paddling for kingfish-now that's a low-fuel day.

Dedicated kingfish anglers will be glad to hear my new book The Kingfish Bible, New Revelations is headed for the printer soon. Subjects mentioned above are explored in much more detail. There are 18 chapters and about 170 pages-including campfire-style stories of winning some of those big, three-day kingfish tournaments out of Galveston, back when they were popular, gas was cheap, and fishing overnight in small boats was more the norm. This New Revelations is in color and has eight new chapters. Older, favorite chapters have been clarified with new details. The tackle section has been updated, of course. Texans Joe Doggett and Shannon Tompkins have written commentary on the back cover. If you'd like an email notice when the book comes out (hopefully by Memorial Day), send an email to: [email protected]