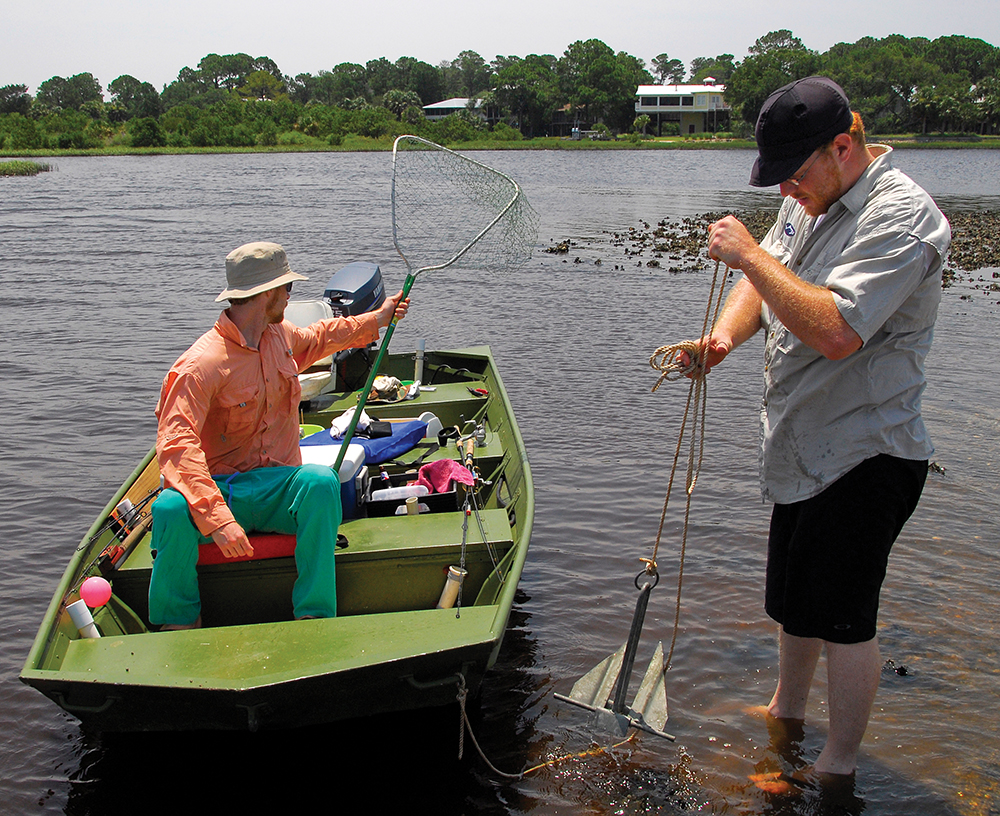 Every boat should carry an anchor, from jonboats up to huge yachts.

In this high-tech age, new wonder items are introduced at the winter boat shows, designed for convenience, accuracy or safety and they certainly have their place. However, in recent years I’ve noticed an increasing number of anglers relying on new-fangled technology when a handful of tried-and-true items on the boat can make a real difference – even in one’s ability to survive mishaps that can turn into tragedy.

In the past couple of years, there have been several reports of bay anglers leaving their boats to wade fish with tragic consequences. As it turns out, the boats were secured with hydraulic-operated poles stuck in bottom sediment. Unexpectedly, these boats drifted off, pulled loose in waves or wind, with someone desperately swimming after it. You can imagine the rest, because a boat drifts pretty fast in typical Texas bay gusts. It’s hard to hear about, especially when a simple traditional anchor could have provided a lot of insurance.

Sailors have been using anchors since before the Greek and Roman Empires, and for good reason. When fitted with a short length of chain to flatten out the angle of the rope, an anchor is designed to dig into the bottom and hold a boat under some pretty rough conditions, even storms. A rope of appropriate length and thickness is also crucial. Worst tale: I had a neighbor from Ohio who tried to anchor offshore in the Gulf in winter with a mushroom anchor and parachute cord, in rough seas. Combined with motor trouble, he was lucky to make it home.

A compass is another item frequently missing from today’s bay boats. Sure, cell phones have a compass app and that’s nice. However, navigating a boat strictly with electronics that can be knocked out from electrical problems or availability of cellular phone service leaves me uneasy. A good-sized compass won’t fail, unless you leave a pair of pliers or can of WD-40 next to it, which is easily spotted. I’ve been aboard expensive hotshot tournament boats that cost a fortune but had no compass, which gave me the willies when the Gulf was rough. One of the boat owners didn’t know north from south; relying instead on the little arrow on his GPS screen that told him where to go. It was the worst Gulf trip I’ve ever made, which is saying something, but that’s another story.

A five-gallon bucket is another must-have. I’ve heard of yachts sinking, because they didn’t have a simple five-gallon bucket aboard that would have moved hundreds of gallons of bilge water overboard in determined hands. The bilge pumps quit after a leak develops, and what are the options without a bucket? A smaller boat’s drain plug can be pulled and the water will run out, if the engine is running well. Of course, a boat’s bilge isn’t always accessible to a flailing bucket. In my small boat the drain plug is right there but I still carry several buckets of different sizes. One for loose items, another for live or dead bait, and a one-gallon castnet bucket. A small urinal bucket can help keep people from toppling overboard, too.

Back in our offshore glory days we used to board shrimpboats, scrounging for fresh bait, and how are you going to score bait or chum out there without a bucket? We’ve won several Gulf tournaments after filling buckets with chum, with some choice fresh menhaden mixed in, which kingfish dearly love. Our first big Galveston tournament was clinched with a 40-pound kingfish that ate a two-day old menhaden donated from a shrimpboat. Good thing we had that bucket, because without it there would have been no chum or menhaden, no big kingfish, no tournament win, and no stack of Ben Franklins big enough to choke a horse.

I’ve mentioned before about carrying a pushpole in shallow water. It doesn’t have to be an expensive graphite model; even a 12-foot wooden dowel will push a boat across an oyster reef, without tearing up the motor’s lower unit and propeller. Bolt three little blocks of wood on one end, and those extra edges will snag and retrieve duck decoy lines, crab trap buoy lines, docks, a Croc shoe floating away, ward off an approaching 30-foot ice floe (in Iowa), push the boat away from jetty rocks, ease up on a shallow redfish school, move the boat silently around small marsh islands while making a long drift—the list is endless. And it’s nice to explore a flat without depending on the wind or a howling motor. Be sure to coat that dowel with a few coats of polyurethane, to prevent warping.

Even with restricted space in my skiff, I still carry a paddle. This may harken back to my friend’s bassboat stalled in the Sabine ship channel near jetty’s end, and an approaching Texaco tanker kept honking at us. This was in 1973, but it’s still ingrained in me, the bow of that ship looming bigger on a collision course. In that deep water only a paddle could have moved us. Fortunately the motor finally started and we scooted away, with the ship’s bow and whitewater less than 100 yards away. We’d had visions of when Amatsukaze cut PT-109 in half, throwing a future U.S. president into the water on a dark night.

Years ago the rig hook was standard equipment on offshore fishing boats. It’s an 8-foot hollow aluminum pipe shaped like a candy cane, with 3/4-inch floating rope running through the tube, knotted at the curved end. That rope, 50 feet long, is connected to the boat’s bow cleat. In rough seas a rig hook is the only feasible means of mooring to an offshore platform, save for tossing a lasso. Or grabbing one of the rig’s heavy knotted swing ropes and tying to that. I’ve done all of these things, even swung aboard oil rigs like Tarzan over whitecaps, and tied my boat to the rig in some fashion. There are many variables of wind and tide and oil rig construction. And you never know when you will need to tie up to one of those offshore rigs. Maybe in a storm, or overnight. Or swim at midday, work on an outboard motor,  wait for a tow, chum for kingfish, or drop baits to the bottom. Maybe the current is too strong to drift-fish, and you want to tie up and stay on the fish.

Sea Anchor. Also called a drift sock. We fondly call mine “the parachute,” and it’s time to “hit the silk” when I ease it into the water. It slows my boat with a jolt, and we can properly make a drift without the wind shoving willy-nilly downwind. A five-gallon bucket will also work here to some extent, even offshore if a boat is broke down.

Tools. A small toolbox seems like a no-brainer. Screwdrivers, pliers, spark plug wrench, several adjustable wrenches and wire snips (for crab traps) will deal with a lot of problems. Keep ‘em wrapped in an oily towel.

A survival bag was added to my checklist in 1990, following winter reports of duck hunters and fishermen who didn’t make it back alive. The bag is nice to have in chilly weather, when help can be scarce. If fog rolls in, who are you going to call? It might be wise to sit tight or head home at five knots. Winter’s low tides can take forever to return; we once sat aground for 17 hours before the water came up four inches and we escaped. With engine trouble or a boat run aground in frigid weather, that bag of food, new tarp and matches can be a lifesaver. When stranded, the nights are long. Build a campfire on the shoreline and don’t forget a little snakebite medicine. And some Advil. Been there, done that.

We also learned long ago to keep a flashlight on the boat. None of us are guaranteed to return to port by dark, because bad things can happen out there. (Caca pasa). We have often fought tarpon until long after dark, and the first time, had to closely follow another boat back in to Port O’Connor. Much easier if we’d lit the way with a Q-beam. There’s no need to blind other boaters, however. Use a light sufficient to illuminate reflective navigation markers in the channel. Even the dilapidated markers in Port O’Connor that are knocked down to two feet or less above sea level, a constant boating hazard over the years. If you’re stuck somewhere overnight on an impromptu campout, a flashlight will come in handy. Useful for untangling crab trap wire wrapped tight around your prop, too. (If you brought the tool kit. If not, call home, pull out survival bag and start camping).

These are basic, non-expensive items for the boat that have been around for a long time, and I carry them even on my 16-foot skiff. (Except for the rig hook).