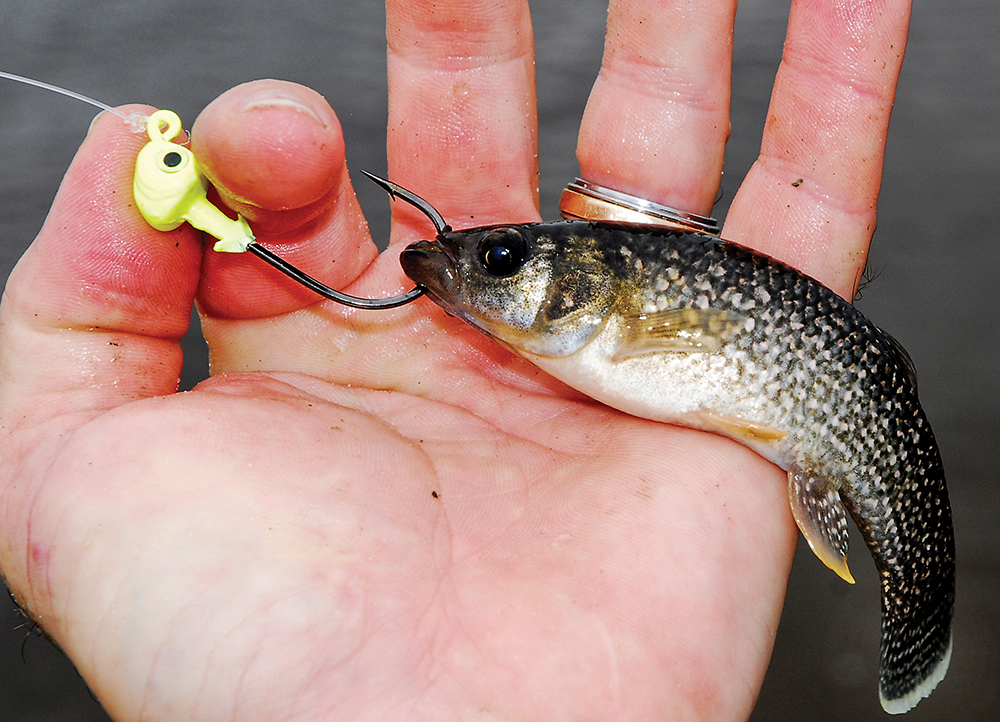 Hardy “marsh minnow” is much tougher than mullet, and dearly loved by flounder. Easily caught from roadside ditches in summer.

When it comes to catching bait, I’m old school. While growing up in Port Arthur, we couldn’t buy live bait, even if we had the money, not even shrimp; we had to catch our own. A few locals owned 20-foot sport shrimp nets with wooden doors that had to be towed behind a boat, but we were stranded on shore. My brothers and I quickly realized that wading and pulling our bulky 20-foot minnow seine was for chumps—saltwater bait easily outran or jumped over the net. We noticed a nearby angler keeping dry while racking up plenty of bait with his castnet, so we bought one the next day. Our garage freezer was soon well stocked with shrimp and mullet.

Fast-forward a half century and it seems like 95 percent of bay anglers seeking live bait now simply drop cash on the counter, then dump croakers or shrimp in their boat’s live well, before taking off. Marinas can charge a handsome price and the cost of shrimp and especially croakers creeps ever higher. One of the guys working at Clark’s Marina in POC told me last summer they’d sold 800 dozen croaker the previous Saturday. At $8 dollars a dozen, that was $6,400 dollars. (Marinas near Corpus have reportedly charged $10 a dozen). If small trout, ladyfish, gafftops, sharks and bait-robbing gulls and royal terns are present, or anglers are setting the hooks too soon, this can result in some very expensive keeper trout, like $10 dollars each.

Last summer, five of us POC guides sat around the steps of Clark’s Marina, chilling out after a long day. Only two of us carried castnets in the boat, though I was apparently the only one who used a net on a daily basis. Captain Curtiss was the other castnetter—he often uses live bait for tarpon and other big fish. Captain Pickle had a different philosophy; he said he didn’t have time to gather bait for four jetty anglers each day. He doesn’t mess with pinfish traps, either. Instead, he and several captains keep accounts at the marina and load up on live croakers each morning before taking off for their honey holes. However, their monthly bait bills can reach or exceed $800 dollars. (These are top guides with busy schedules). As for myself, I’ll fish most of the day before resorting to croakers. Run back in and maybe buy three dozen if we’re hard up for fish. There are days when even croakers won’t work, of course.

For me, catching bait is part of the fishing experience. The Gulf provides a smorgasbord of bait for those willing to spend a little time harvesting it. It also gives my fishing companions a chance to learn more about Gulf waters and what’s in it. Certainly more than a bucket of croakers and (maybe) a limit of trout. The following are a few favorite baits:

Pinfish. Find a decent bed of bottom grass and you find pinfish. Miss Amy catches them with a 4-foot ultra-light spin rod with bobber and 8-pound line, split shot and a tiny “hair hook.” Pinfish aren’t picky what they eat, while trout and redfish love them some pinfish. Give that “Pinny” a haircut with scissors (trim off the spiky dorsal fin) and set it out under a popping cork or on bottom. Almost every trip, we’ll latch on to several trout or redfish this way. My former neighbor in Port O’Connor, Jimmy Crouch, told me how back in the early 1960s, commercial trotliners in Baffin Bay were baiting up with pinfish each night. They must have had decent grass bottoms back then, to catch so many pinfish. One night the commercial guys became a bit incapacitated, and at midnight Jimmy offered to check their trotline. It was filled with huge trout and he piled them in a heap. Next morning they gave Jimmy one trout for his efforts, a fish that looked just like any other in the pile. Next day, back in town, it weighed 12 pounds. He took it to a taxidermist.

Pinfish are voracious and also hang around marinas near fish cleaning tables. Bait a pinfish trap, let it soak for an hour, and see what’s inside. I caught a great many pinfish that way last summer until the trap, tied to a piling for three weeks, eventually vanished.

Mullet. No castnet, no mullet. At least live mullet. Learn to throw the castnet, and stock up on mullet and use them for bull redfish, tarpon, offshore bait, or even mullet fingerlings for flounder. The September mullet run is best for stocking up. Just about anything will eat mullet, but they can’t be kept alive in marina tanks because they bruise overnight. And what a bait; I’ve seen tournament-sized bayou redfish that would do anything for a small piece of fresh mullet. When I run out of bait I just keep throwing the net until I have enough for another go. Buying frozen mullet seems inconceivable except in the dead of winter.

Menhaden. These summer baitfish are found off the beach and are great for tarpon, bull reds, sharks and big jacks. Lacking a castnet, all you can do is buy fresh “shad” sold in Galveston bait shops. At Sabine Pass we used to buy 50 pound crates of these baitfish, for overnight trips in the Gulf, where snapper and kingfish ate them up.

Marsh minnows. During the November flounder run, hearty marsh or “bull” minnows can be purchased mostly in Galveston bait shops.  With a castnet, they’re easily caught in roadside bar ditches. They can be chummed: pull a shell off a blue crab, toss it all out there and mark the spot. After several minutes, throw the castnet right on it.

Fiddler crabs. If you’ve walked the jetties at Port Aransas during winter, you’ve seen the snowbirds with their cane poles and bait containers holding fiddler crabs. Some of the crabs might have been hand-caught, but many are bought from marinas. It’s hard to find fiddlers in winter, except during a real warm spell. They can be thick during summer, however. I’ve read they’re easily caught by burying a can flush with the sand, and leaving a scrap of bait in there. The crabs smell it, jump down there but can’t climb out. I’ve never tried it, but then I haven’t used fiddler crabs that much. A snapping live shrimp always seemed like a better offering at the jetties.

Blue crabs. While living in Port O’Connor I kept several crab traps set out in a sheltered, deep bayou where storms couldn’t blow them away. Baited up with fish heads, mostly. Each morning we’d pick up 1-2 dozen crabs, and use them for redfish and big drum at the big jetties. One March we caught our biggest sheepshead ever using one of those crabs that turned out to be a softshell. The sheepie weighed 10 pounds, 10 ounces. In colder February, don’t expect to fill a trap; crabs are mostly buried in soft bottom, very sluggish and waiting for warmer weather.

Oysters. Years ago in winter we were one of the first guys to camp at the Army Hole campground on Matagorda Island. The Feds were running it after the Air Force left. It was cold and gray and we shot limits of quality ducks. Tired of eating fresh, fried oysters on the Coleman stove, we wanted a few fish. I shucked a few small oysters, threaded them on hooks and fished around the harbor pilings. We soon had a dozen small but legal sheepshead. Filleted and breaded in cornmeal, then fried in peanut oil, they were delicious.

Shrimp. These are easily caught with a castnet during summer and fall, though you want a clean bottom where the net won’t snag. We used to bait up white shrimp with a can of Kennel Ration dog food. Mark the spots along the seawall, and return 20 minutes later to throw the net. Shrimp can be caught at the beach in summer, off the rock groins along the Galveston seawall, and even out at the big jetties in 20 feet of water. You have to let the castnet hit bottom, before retrieving. Three summers ago friends did that and filled an Igloo with big brown shrimp—and forgot about fishing that day.