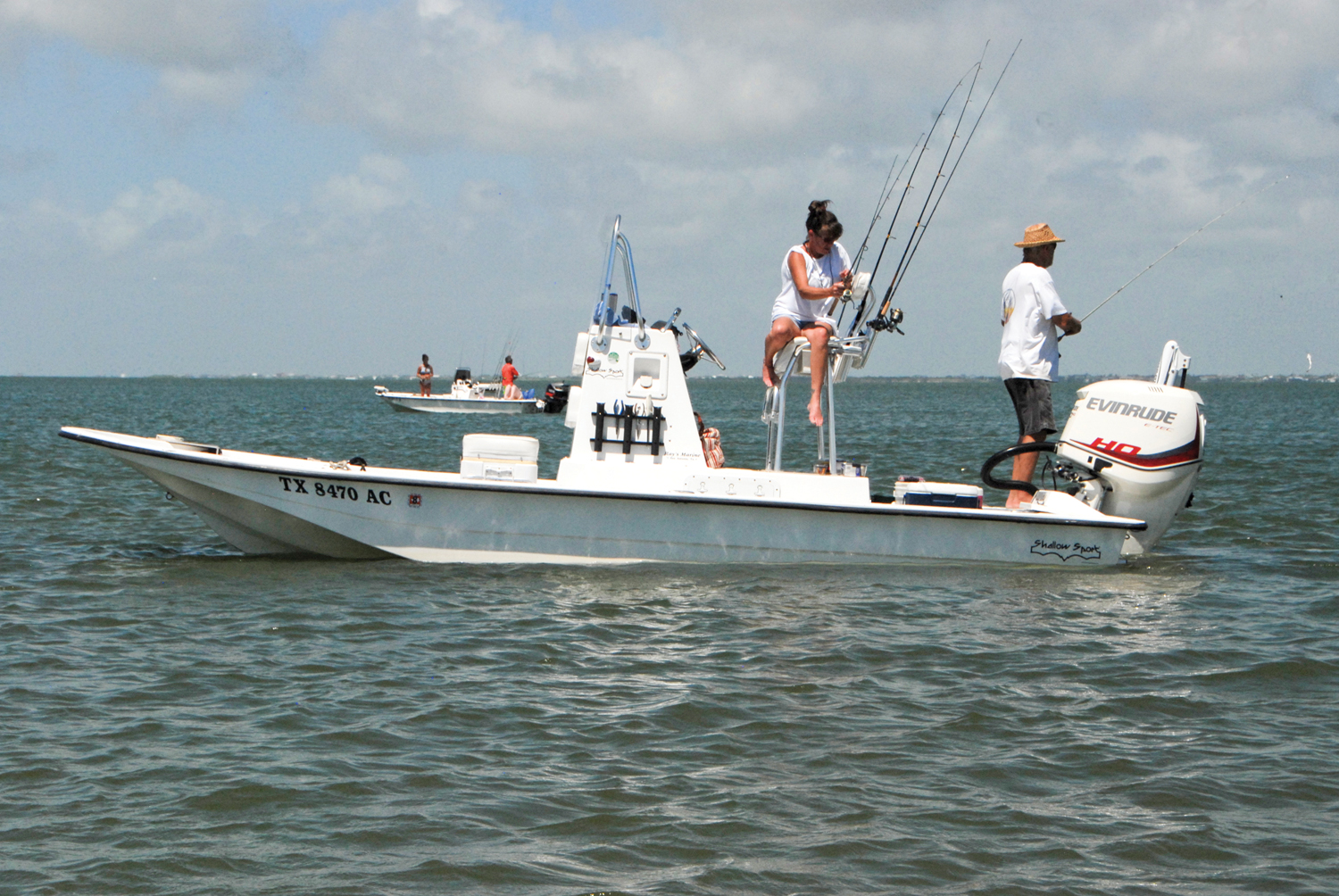 A slow drift can be accomplished without a drift sock, but how many days are this calm on the Texas coast? Not many weekends, during some years.

As the holidays approach at breakneck speed, I’ve been thinking about a few handy items in the boat that might make useful gifts for your favorite angler. I guarantee they’ll be used more often than the usual necktie or cufflinks gift.

The first item that comes to mind is a drift sock. We affectionately refer to ours as “the parachute.” I’ve had one for 10 years, but recently found ourselves using it much more frequently, making slow, controlled drifts where we suspected there might be fish. It gave us more time to sling artificial baits and really probe the depths, and many trout were landed as a result. One fish at boatside bolted away straight into the funnel some 10 feet away, which stopped him cold. Fortunately a hook didn’t get stuck in the fabric.

In August we had a match between parachute and wader. Both boats arrived on a sunrise flat at the same time, and the guy was hard-pressed to reach his spot, slogging along while I drifted quietly at the same speed not even 50 yards away. We both caught trout, then I pulled anchor and continue the drift, easing through a windy creek and out into a bigger bay. He was left to wade a long ways back.

I’ll expound on our parachute techniques in a future issue, but suffice it to say that in windy Texas weather, this odd contraption is a necessity. It can be tied amidships to a handy cleat, and the boat will drift exactly perpendicular to the wind, allowing everyone a shot at casting to unspoiled water downwind. Our version is a large cloth cone, about a yard wide at the mouth, towed from a short rope. When fully deployed it will jolt a big jonboat when the rope comes taut, and you have to brace yourself if standing. After that, it’s a nice controlled drift with time to try different lures before passing across the honey hole. Shell reefs aren’t so big these days, so a slow drift works best. The boat’s drift can be sped up by retrieving the sock.

In June we made a slow drift of a mile or more in the shallow back-country while a northeast wind was cranking. Each time we neared a point of land, I poled around it and we kept on going for hours without using the motor. Pelting the area with topwater plugs, we picked off several reds, and eventually came up nice and easy on a school of 40 or so slot redfish that were too busy rooting and tailing to notice us. We eased the chainless anchor out and stopped just upwind of the school. Amy was so enthralled by the patch of copper-red water and waggling tails, she didn’t cast right away. I had time and should have taken photos, but instead my eager lure landed just beyond them. A few turns of the reel, a heavy boil and I was bowed up. The school bolted in every direction, unfortunately, and we lost track of them. Next time, we’ll try to time both retrieves at the right moment into the school for a double-header.

Another item that has been useful on nearly every trip is a push pole. I’ve covered this before, but a 12-foot push pole has so many uses on a boat, it deserves mentioning again. The last use unfortunately was when my motor blew a powerhead not far from town. We poled around and caught a few fish and then eased 80 yards over to the channel. The first boat passing by that morning (returning with fuel problems) offered a tow. It was the day before Hurricane Harvey and Matagorda Bay was freaky glass calm, only mullet ripples. (In retrospect we should have kept going with the pole until noon at least, busting reds and trout that were hungry that day, before getting a tow). The other boat pulled up but drifted a little too far into the shallows while we rigged the tow-rope, and I had to throw the stranger my pushpole so he could get his boat off the flats. Then, it was a quick tow back to town. At the marina he seemed to admire the push pole and then returned it.

One never knows what the day will bring but a 12-foot wooden dowel is a worthy investment. My version is from a hardware store and I bolted on small blocks of wood at one end, and then coated with four or five coats of polyurethane. Since then it has reached out and grabbed duck decoys, crab buoys, docks, Gulf and bay platforms, fended off jetty rocks, eased us over shallow oyster reefs, explored big flats, and gotten us out of tidal creeks when the tide was dropping fast. Saved several hats and a floating Croc shoe. The pole is mostly a saver on lower units, props and water pumps. It also makes an easy, homemade Christmas present. We don’t leave the dock without it.

You can do someone (including yourself) a big favor at Christmas by buying protective sun gear. The only item that really blocks harmful rays is sun-proof clothing—we no longer trust sunscreen. (Though we use zinc oxide on days when we can’t entirely cover up).Long-sleeve shirts should be mandatory for regular fishermen. Button-down cotton with a collar is obviously cooler. If you’re slinging a castnet, wearing a tight-knit long sleeve without buttons will prevent mesh from snagging shirt buttons while in mid-throw. Aggravating, when a hundred finger mullet finally pass by at close range.

Buff-style facemasks (a generic term) became more common in Texas after 2009. Prior to that, I didn’t see a single one in Port O’Connor. Today they’re fairly prevalent. We favor the dark ones that seem to block more sun, versus the cooler white versions that are almost thin as an old tee-shirt. They’re not 100 percent sun-proof, but smearing a little zinc oxide under the mask has been very effective when fishing for 12 hours. Fishing a few casual weekends with occasional light burns is one thing, but guides should be wearing these masks every day out there, if they’re determined to go the distance. Without sun protection, some skin doctor in the future may be carving on them like a…well, maybe not a Christmas turkey, but you get the idea.

Protective hats are even more important. I shun sketchy golf visors that allow sun and rain on top of the head; getting skin cancer up there is a big concern after a fishing buddy died from it. Covering the ears is another priority. When my kids were small and squirming under an application of sunscreen in the boat, I used to tell them that the old-timers often have their ears notched like family hogs by skin doctors. After due reflection, they sat real still for an application.

Fishing gloves. After trying different brands for six years, I prefer those that have an extra leather pad sewn into the palm. They last longer when handling a lot of fish, and often deflect sharp teeth and hooks. Thin nylon gloves stretch, are cooler and completely protect from the sun, but may not deflect an injury. Although I have one pair with a line of little cuts where a Spanish mackerel bit but somehow never broke the skin, a lucky break. I’ve also had a plug come flying back at my face, hitting the double-glove right at the wrist over tendons. Easily removed. Regular use of these gloves should prevent hands like we see on the old-timers, blotchy and pre-cancerous.

Long pants are another must for serious anglers. I sometimes wear shorts until mid-morning or so, and then pull doctor’s scrub pants over them. They’re light, roll up small for storage, and seem to be fully sun-proof. Most days I wear a pair of beige fishing pants with sturdier threads, which can help prevent injury as well as sunburn. I’ve had a kingfish rear up on deck with a big trolling plug with heavy treble hooks, ripping my pants while 50 miles offshore. But the hooks never touched skin.

The same with shoes: I’ve had numerous hooks stuck in my shoes without penetrating. I’m fond of New Balance brand shoes with extra blue pad inserts that take the shock out of hitting a few thousand waves each day. Lord knows, offshore is no place to go barefoot—the late Capt. Howard Horton in Galveston was famous for fishing barefoot out there, and took some hard hits over the years. Once, a 30-pound mahi flopping on deck impaled a billfish-sized hook in his foot just below the shinbone. Howard danced around with that fish, hopping on one foot until they could quiet it down. Bolt cutters were used to remove the hook. On another trip at the jetties, he had a gaffed, three-foot blacktip shark bite his bare hand, leaving three fingers barely attached. Doubtful that fishing gloves would have helped him, because blacktips have triangular cutting teeth.

If all this sounds like too much precaution, keep in mind that I’ve somehow made it to 65 and can still fish for two straight weeks out of Port O’Connor. I’ve seen what just one Saturday can do to the weekend crowd: most of them are slow-moving on Sunday mornings. Many of them launch late, if at all. They’ve had about 18 to 20 hours of fun the previous day under a cruel sun and often, plenty of wind. Not to mention a little Crown that night.

Anyway, this list may not be as glamorous as a new $300 spin reel, but these items should improve your catch-rate, fishing stamina and longevity.