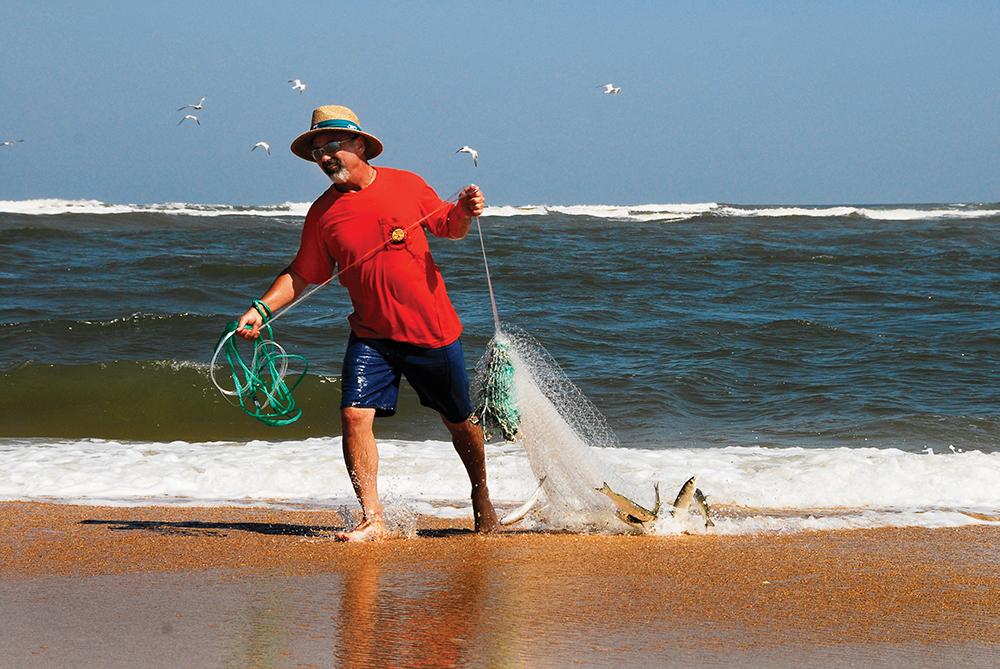 Is that Santa Claus on the beach with a castnet? We report, you decide.

It’s that time of year again after a year of hard fishing. Glancing around the boat, I’ve come up with a list of items that might make useful gifts for fishermen during the holiday season. Everyday items that can make a difference out there.

Castnet. If you know someone who can use a castnet, this is a handy item that can save on bait costs. Marina bait is limited and increasingly costly. And these nets aren’t that hard to throw: In Mexico, I’ve seen 12-year olds in waist-deep water, throwing immense nets landing in perfect circles that looked 30 feet in diameter.  I started throwing 53 years ago and continue today. I still can’t throw the big nets, but a 6-foot radius net will land where I want it to.

My freezer was recently packed with 4-6 inch finger mullet frozen in water, caught during the autumn mullet run. These mullet can be precious items from November through March when nobody has them. Especially in the bays, when redfish and big trout haven’t seen one for a long time.

You can learn to throw a castnet in the backyard and there are self-help You Tube videos. Set a few objects out on the lawn and practice hitting them. In murky upper-coast water, there is often little sign that bait is there and “blind-throwing” is common. There are however favorite bar ditches where baitfish congregate and  ripple the water when moving (though not in winter). Mullet nibble algae on hard growth around public boat ramps, where I’ve caught them during quiet minutes between boats. On the middle and lower coast in clear water, mullet are more easily seen, but they’re more skittish around people. Summer is peak castnet season.

Fish gloves: Nice if we’d had these decades ago, and saved us trips to the emergency room (ER) from hand injuries. For anglers who fish a lot, a new pair of gloves is welcome each year. My latest are Fish Monkey gloves, or as I call them, “Shock the Monkey” gloves. I’ve seen videos of guys hiking over jagged limestone on the southern shore of Australia, fishing from cliffs 20 feet above water, without gloves. It makes me wince every time; one stumble and their day is over. I’ve mentioned this before, but wearing borrowed shoes and slipping on a Texas jetty put me out of business for weeks. In the hospital they yanked an oyster out of my hand without even numbing it, and I know people down the hall plainly heard me. If I’d worn modern fishing gloves back then with the extra pad sewn across the palm, it would never have happened. (Except these gloves were rare until recent years). There are lots of ways to get poked and scraped while fishing, but guys walking the jetties run the highest risk of hand injury.

Buckets:  This is really basic stuff, but keeping different-sized buckets in the boat has many advantages. A castnet will fold up and store neatly in a 2-gallon bucket, for instance. If you’re throwing a castnet, keep that live bait happy in the bucket, before transferring to the live well or minnow bucket. That same 2-gallon bucket is also handy at times, when somebody in the crew has to rid themselves of slightly used coffee.

A larger five-gallon bucket carries loose items like spools of leader, corks, fillet knife, small first aid kit, foldup fish ruler, boat registration and other necessities. A few times we’ve pulled up to shrimpboats offshore and mine happened to be the only bucket on the boat, which meant I had to dump everything out while trading for shrimp or bycatch laying all over the shrimpboat’s deck. They loaded us up, too…Later in the day, that same bucket hauled fish to the cleaning table and soon enough, bags of fillets to the truck. That same bucket would have also been handy if we’d sprung a leak offshore and the bilge pump failed.

I also keep a red, one-gallon bucket packed with daily essentials, dug into once I crank the boat engine and begin idling out. It carries fishing gloves, Buff sun mask, sunscreen, 8-inch needlenose pliers, a short bait knife, hand-held GPS, and polarized sunglasses. You don’t want these necessary items scattered around the boat, when you know you’re going to need them on every trip. All three of bucket sizes mentioned above nest inside each other, if need be. One or all three bucket sizes can be put to work bailing a leaky boat.

Spoons:  Everyone likes shiny baubles hanging from a Christmas tree, and my favorite is gold spoons—we never visit the coast without them. They’re good stocking stuffers, or they can be used to fill new fish buckets under the tree. I have friends who throw spoons all day, whether inshore or offshore, and that flashy metal has long been a reliable artificial lure for catching trout, redfish, pompano, especially Spanish mackerel, kingfish, all sorts of Gulf critters. Look for the heavier, Dixie Jet spoons for long casts into clean water when fishing from the surf, or around oil rigs. The lighter ¾ ounce Johnson Sprites we use around jetty rocks and grass bottoms in roughly six feet of water.  Unlike soft baits, spoons will last for years when rinsed at day’s end. They can be painted, and the treble hook is easily replaced. The single-hook, weedless spoon is best in shallow water for rooting redfish, even in flooded vegetation. Go for the gold; the silver spoons aren’t as effective in saltwater.

Clear Tackle Trays.  Lose those old, multi-level tackleboxes so easily tripped over in the boat, and stick with the clear, inexpensive flat plastic trays that can be stored anywhere, even in a bucket. My skiff is small and I only carry three flat boxes, replacing them after they’ve seen too many salty days. One box carries plugs, the second soft plastics, and the last carries gear for bait fishing—mostly hooks, swivels and lead weights. I’ve done pretty well in the past few years with just these three boxes.

PFD. I’ve written about this before, but self-inflating personal floatation devices (PFDs) can be life-savers. They’re compact and not uncomfortable in hot weather.  My fishing buddy Chuck from Atlanta always wears his, after he fell off a dock into cold water at night. There was nobody around to help, and no ladder to climb. It was a long swim to the shoreline, and he wouldn’t have made it without that self-inflating jacket that kept him very buoyant. When wet, the interior CO2 cartridge inflates the jacket very quickly. Pow! Like life jackets on airlines, they can be inflated manually, too.

One never knows when he could pass out for various reasons, sometimes with no warning at all. Topple overboard, and you might be a mile from land. And asleep in the water. Without that jacket, you’re pretty much a gone goose unless help arrives within seconds. That’s an argument to always fish with a buddy, but sometimes that isn’t possible, and it’s a common sight to see guys boating alone. Sometimes they find boats circling with nobody in them—another stroke or heart attack that fell overboard. If you know someone 60 or older who fishes alone, this gift could very well be a life-saver.