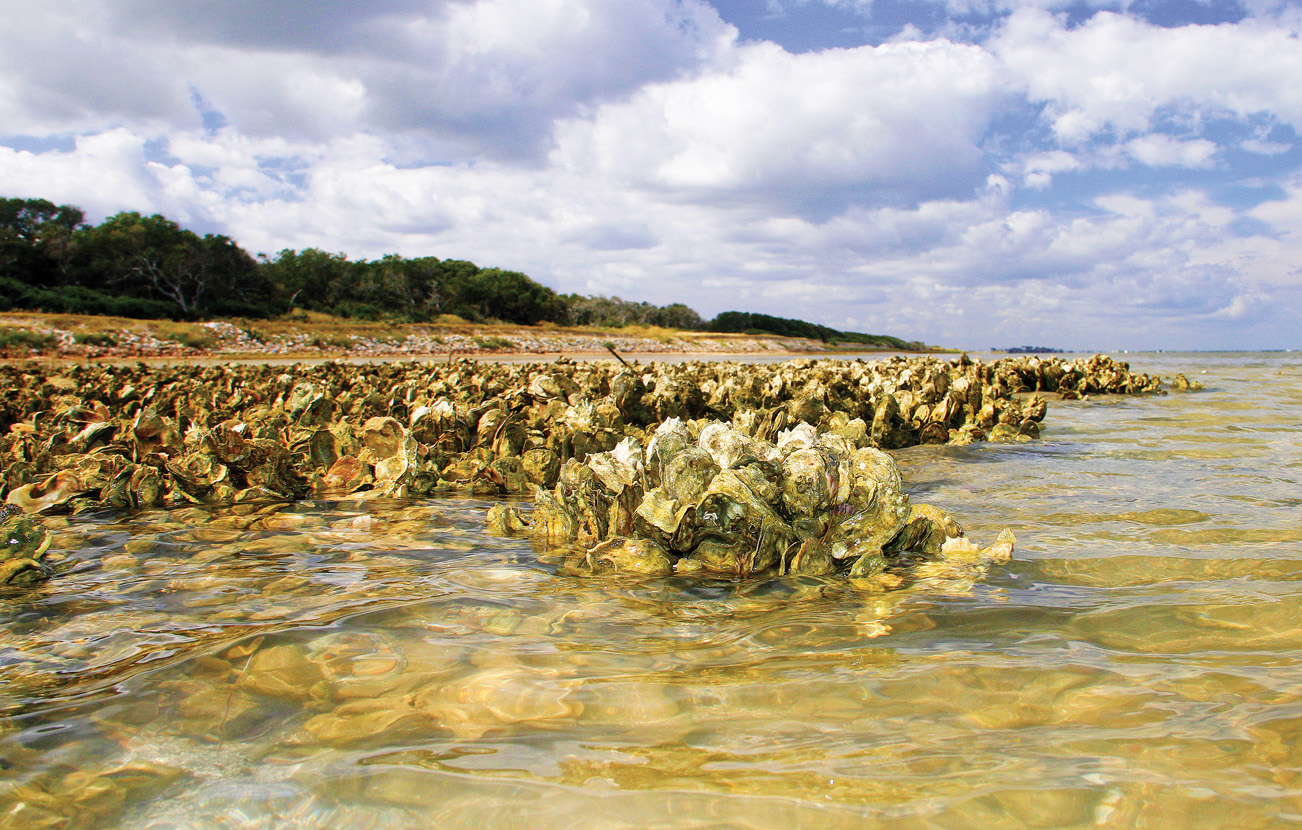 Oyster reefs in shallow water are getting new protection in Texas. Photo by Shannon Tompkins.

The lowly oyster may be the most important marine critter living in Texas bays. Often hiding in murky water, they’re hard on boating and fishing equipment, fairly ugly, and have sharp edges that send fishermen like myself to the ER. Who knew they provide extremely beneficial, diverse habitat for a host of marine species—all the way up to trout, redfish, black drum and sheepshead? According to biologists, oyster reefs are far more productive habitat than bottom seagrass.

Little known fact: Each oyster filters up to 50 gallons of water per day, which makes one wonder about water clarity in Texas bays before the advent of commercial oystering.

A tough animal to crack, the oyster is fragile in other ways. Too much fresh water, and they die. Water too salty, and predatory sea snails called oyster drills move in for the kill. Overharvest has killed off about 90 percent of the world’s oyster beds, unfortunately, and there isn’t enough local spawn left to repopulate. When a bay loses too many oysters, they may never return. Not in our lifetimes, anyway.

Texas oysters have been in the news this year after the local situation reached critical mass. More than 500 commercial oyster boats were registered in Texas in recent years, and many more came from Louisiana after their oyster harvest took a dive. On top of that, Texas has alternating periods of flood and drought. Texans finally reached their boiling point when oyster crews abandoned their boats and pillaged a number of shallow bays, using four-wheelers at low tide, exploring on foot and harvesting by hand. It was “cooning” oysters on a commercial scale.

And it was all too much. As a result new harvest laws, shorter daily bag limits, tougher fines and bay closures were approved in September, hoping to remedy the situation. It was a step in the right direction, hoping to rebuild valuable bottom habitat that has been slowly ground away (in the deeper bays) for more than a century. It’s a good thing oysters grow fairly quickly, or this crisis might have happened long ago.

Texas hurricanes Harvey, Rita and Ike hit within a 12-year span, and were destructive to Texas bay bottoms. Many of the old, historic oyster reefs in Galveston Bay by then had been scraped almost flat by commercial harvest, putting them at risk of being covered in silt. It turns out the silt from Hurricane Ike alone smothered 8,000 acres of reef. A few generations ago, that likely would not have happened when these reefs, some of them centuries old, were taller.

In the meantime, new oyster laws will be in effect on November 1, which is the opening of Texas oyster season. Bay fishermen are encouraged to be vigilant when observing future oyster harvest.

From now on, commercial oyster fishing is closed on Saturdays and Sundays. Game wardens will be checking boats for the daily bag limit, which has dropped from 40 to 30 bags. Undersized oysters can only make up five percent of the catch, and fines have been significantly increased. All harvest (recreational or commercial) of oysters is prohibited within 300 feet of shore. Commercial oyster harvest is now prohibited in Christmas Bay, Hynes Bay, Carancahua Bay, Powderhorn Lake, St. Charles Bay and South Bay down at Port Isabel.

Rebuilding Texas oyster reefs won’t be easy. It takes heavy equipment and a lot of money to rebuild even 50 acres. Protecting them from midnight harvest will require vigilance, as well.

I have no idea how many tons of oyster shell is required to start a new viable reef, but it must be measured by the barge load. Dry oyster cultch (the old shells) are ideal for this, and it’s painful to see piles of these shells up and down the coast, going to waste. Or saved for dockside bulkheads. Wouldn’t it be great if these shell piles, nicely dried out and clean, were returned to the bays within 60 days of harvest? We fishermen can haul a few baskets or Rubbermaid boxes of dry shell out to the bay and dump them at some favorite spot, and maybe start new oyster growth. Even attract gamefish in the near future. But a basket of oyster shell is heavy, trust me. And building a multi-acre reef requires heavy equipment.

One historic reef that has been partially rebuilt with success is Half Moon Reef in Matagorda Bay. Two centuries ago it was a square mile of living reef, partially exposed at low tide, far from any shoreline. It was just one of 45 square miles of oyster reefs in Matagorda Bay. In 1858 Half Moon was so thick with oysters, they had to build a lighthouse there to warn boat traffic.

Back then the bay’s water hydrology was very different. The Colorado River flowed directly into the east end of Matagorda Bay, providing a constant mix of fresh and salt water—ideal for oyster growth. That great mix of quality water could only exit the bay through distant Pass Cavallo, where the daily current kept it open and deep enough for visiting ships. But modern times have brought change, and none of it good for the bay. Fresh water from the Colorado was entirely diverted and drained into the surf, wasted until recent years. The big jetties were dredged, sending massive doses of Gulf water on a daily basis into Matagorda Bay. Half Moon Reef was ground down to shell hash by the commercial oyster fleet. Pass Cavallo, once a legendary fish pass, is today anemic, mostly shallow sandbars.

There is good news, however. The Nature Conservancy recently rebuilt part of Half Moon Reef, at a cost of $5 million dollars. They planted 54 acres of mostly limestone riprap that oysters quickly attach to, and today the reef is a fine spot for catching (you guessed it) trout, redfish, drum and sheepshead. It’s become a case study in rebuilding an oyster reef, where biologists can study the quick rebound in marine life—when there was nothing there only four years before.

“With Half Moon Reef, we saw the chance to measure how oyster reef restoration impacts recreational fishing and the local economy,” said Mark Dumesnil to the Houston Chronicle. Mark is associate director of coastal restoration for the Conservancy. “As fishermen, we know anecdotally how important oyster reefs are for the fishery. But we had a chance here to measure it scientifically.”

Surveys with local fishermen indicate the reef is quite popular, with up to 30 boats anchored there on some days, despite the reef’s isolation. It’s become such a success that the Conservancy has labeled it a “cornerstone” project. With the knowledge gained from this new reef, they have future plans for reefing Copano and Galveston Bays.

Building reefs takes time and money and volunteer work. We could look back to the past century(s) and say, “If only this and only that.” Or we can look to the future. It’s going to take a lot of reef-building in the bays (and offshore), for Texas to maintain a sustainable fishery in the 21st century. We may as well get started.