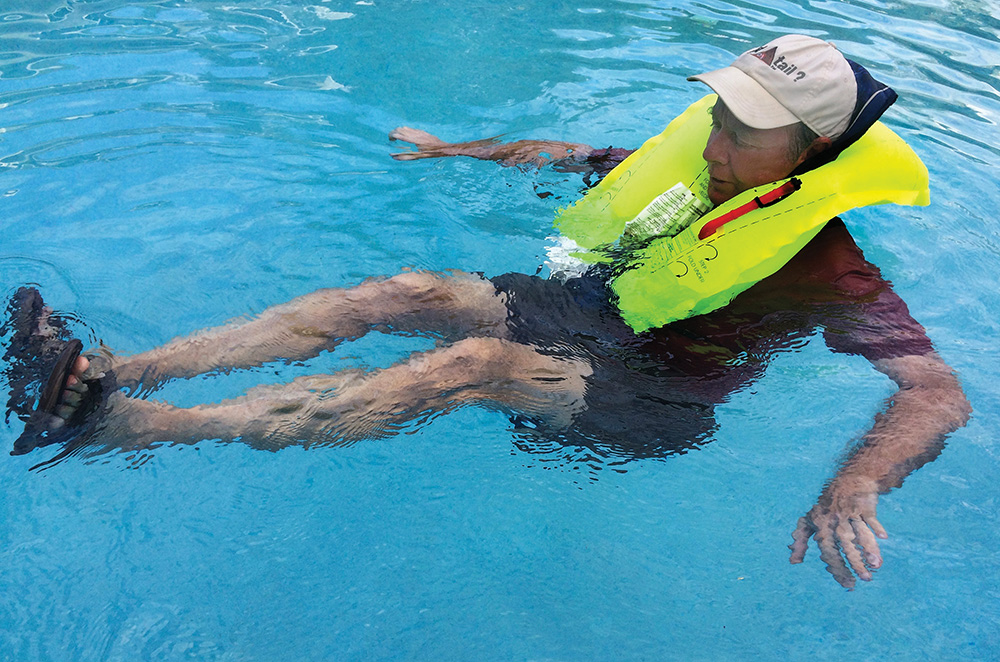 Author jumped in the pool with his new PFD, to try it out. The trim blue vest ballooned into a highly-visible neon green. Red mouth tube was inches away.

As baby boomers grow older but continue fishing, the popularity of self-inflating PFD vests keeps growing. The little vests are unobtrusive and nothing like old-style orange life jackets that become soggy and limp with age. Or the “bass boat” vests that are hot to wear. The smaller, self-inflating PFDs pack a wallop of CO2 inflation when they hit the water, or they can be inflated manually with just a few puffs of air. We’ve learned to wear them all day while fishing and have become quite used to them, even wearing them around the marina at day’s end. Our current favorite is the Onyx A/M 24 – very comfortable for all day wear and features both auto and manual inflation options.

While out on the boat, inflatable PFD’s are great for emergencies when life jackets can’t be reached in time, and we all know bad things can happen fast while boating. Who wants to stroke out or pass out from heat exhaustion and fall overboard, hitting the water without flotation? One can easily fall overboard for different reasons. Readers may recall I had a passenger go overboard while offshore, who was difficult to spot in five-foot whitecaps, by the time I turned the boat around. She was treading water with nothing more floatable than a pair of Croc shoes...which didn’t help much. Even in summer’s warm water it would have been a sketchy swim back to the beach without flotation. I’ve also had two guys tell me their lives were saved because they wore the small PFD vests. They’re small until they inflate, that is.

On Matagorda Bay alone, there are sad stories from recent years. One young guy was wadefishing a shoreline and his boat drifted away. He swam after it with tragic results. Wade fishermen, especially in the surf, have drowned without flotation. In the surf, one would use the self-inflator, rather than the auto-inflate that carries a water sensor. In past years, the same Port O’Connor area has had a number of fatalities, either from duck hunters or anglers trying to fish the Army Hole on Matagorda Island, a place completely exposed to fast-hitting cold fronts and their cruel north wind. During winter, these PFD vests will keep you afloat when legs and arms become lethargic from cold water.

I prefer the auto-inflator model because we fish in open boats. There is little chance of being trapped under a flipped hull, getting auto-inflated and pinned underneath. There is a chance the vest can inflate in heavy rain or spray on a rough day, but the vest can be shucked or much better yet, manually deflated by pushing the hose’s air release button. Sail boaters have different concerns and often prefer manually-inflated PFDs because their boats can roll over, trapping them inside if the vest inflates. The manual model is great, unless they’re knocked unconscious and overboard by a swinging mast, which is double jeopardy. We fishermen drive faster but simpler craft.

While taking out charters, I’ve carried around quite a few “old guys” in the boat in recent years. Many won’t eat during a long day on the water (for other reasons), but they also barely drink water, either too modest or too ungainly to stand up and relieve themselves over the side, which can be hazardous. (See the stats below). Most of the big, older guys have bad knees and poor balance, so they simply don’t drink fluids. If they’re in pain, they can always use one of my buckets, however. I carry different size buckets for various tasks, like holding a few live baits, or plugs that have been dunked in salt that need to be later washed. It’s the little things that can save lives, and a one-gallon bucket can ease someone’s pain without them toppling overboard. Other small life-saving items can be attached to these PFD vests, starting with a plastic whistle and small pen light.

It’s been said that fishing is an endless string of misadventures, with the occasional perfect day. But the possibilities for trouble out there are endless, and every year there are sad consequences. We fishing guides are not supposed to have misadventures, so I keep a close eye on my clients. I don’t mind pulling over to shore in certain places for a break, and to stretch those legs. Sometimes I’ll wade and throw the castnet while clients walk the beach. Or run for the bushes, for that matter. And they can do so without removing their PFD vests.

A recent study of 10 years of boating fatalities in Canada revealed that of hundreds of fishing-related drownings, only 10 percent were wearing a life jacket. In a quarter of the incidents there were no life jackets on board. (Canada doesn’t require boaters wear life jackets, but they’re supposed to be stored on the boat).  In the remaining fatality cases, there were PFDs aboard but not used. The report states that more fishermen drowned than swimmers. More fishermen died than from powerboats, canoeists, scuba divers, sailors and kayakers combined. Very often they were within 50 yards of shore.

There are of course differences between Canada and Texas fishing. They have very cold water to deal with, so hypothermia is a big factor there, while we often get 90 degree water during summer, warm enough to float around for two days. And Canadians are fond of small, high-sided aluminum boats, so there’s that.

Another grim statistic: on average, 225 Canadians fell overboard and perished each year while urinating. Stand up and topple out of a boat, and few if any of us near retirement age have the upper body strength to climb back aboard while wearing wet soggy clothes. Unless the boat has low sides or a stern mount for climbing aboard. For swimmers too big to be hauled aboard by fishing buddies, the only recourse is towing them to shallow water, or calling the Coast Guard. Regardless, it makes sense to wear a PFD vest. And while you’re at it, bring a small bucket so anglers can sit and keep a low center of gravity, while communing with nature.

One can’t just wear these PFD vests in a harsh climate and expect them to always work when needed; they have to be maintained. The outer coating is canvas-tough, but the inner air bladder is plastic and must be checked for leaks, which can be done by holding it underwater in the bathtub. The auto-inflate device, called a bobbin, is sensitive to water and should be inspected for corrosion. Manually inflated PFDs aren’t as complicated, since a small hose inflates them.

The self-inflators carry a small green tab, which means the PFD is armed with CO2 and ready to inflate. A red tab means the vest can only be manually inflated and needs service for auto inflation. In that case, you'll need a re-arming kit. The small CO2 canister should be inspected for corrosion or leaks. You don’t want to wear that PFD for several years, then hit the water and not have it work, which could be just as fatal as a parachute that doesn’t open. The PFD should be inspected every two to three months if the vest is worn on a regular basis, especially when boating in a hot and humid environment where corrosion is a factor. (Like Texas). These vests have cloth “care instructions” tabs sewn inside the fabric cover that pop out and also provide the part number for the re-arming kit containing the cylinder, bobbin and other replacement parts.