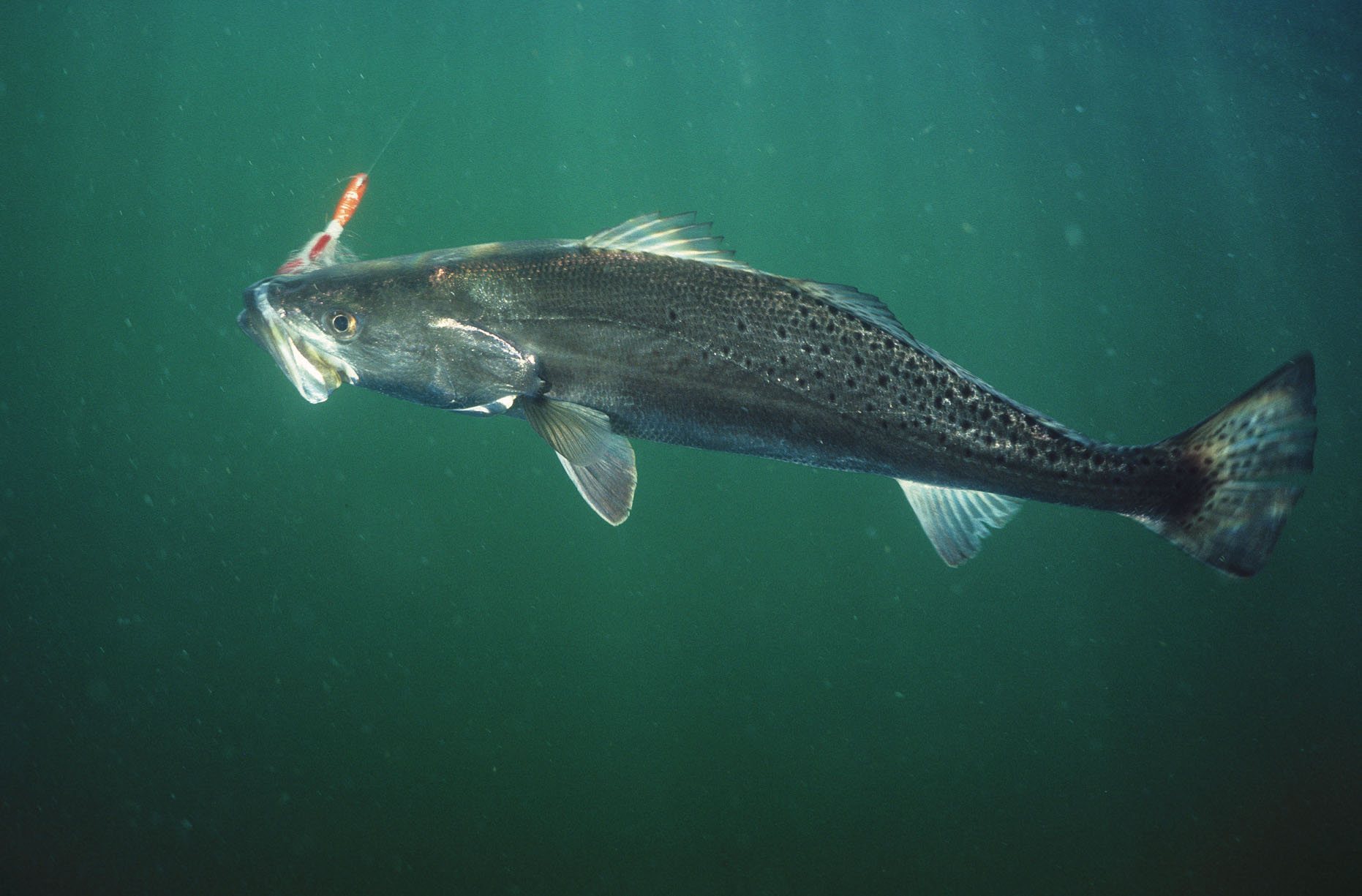 Trout hooked on a jig in 35 feet of water offshore.
Ever tried dancing a jig? Not on the famous dance floor at Madden's in Port O'Connor... but saltwater lures, lead-head creations that settle deep and fish are fond of. Even the marlin crowd now labels their trolled, skirted creations "jigs," but we'll stick with more standard varieties here.

Savvy coastal anglers carry a variety of jigs in the boat, because they're bad medicine on almost anything swimming past the Texas coast. We carry an entire tacklebox of different sizes and colors, and have for many years. There was a time when jigs, especially the offshore variety, were hard to find in Texas storesthey all seemed to be made in Florida and not many migrated west. Today they're more widespread in Texas store aisles, and everywhere on the Internet. Let's do a fast sweep of jig action, from coastal marsh to the deep Gulf:

Bay Jigs: Everyone by now is familiar with trout jigs, and the endless variety of soft plastic tails available today. Years ago we favored both the Tout Tail and Kelly Wiggler, even the Chubby Shrimp made in South Texas, but now there are too many brands to name. Soft-plastic jigs have probably caught more trout and redfish than anything else, with the gold spoon running second. Perhaps the biggest change in jigs has been the scented Gulp! Lures, so valuable in murky tides. With the Gulp! you don't have to sweat finding green water, or turn around glumly at the boat ramp with a gusting SW wind in your face. Instead, you launch the boat and learn to work that scented jig very slowly. That's how we won first-place flounder last Memorial weekend, out of Port Arthur. Local Mike Cichowski is a big fan of these jigs and worked it, should I say dragged it, painfully slow on bottom. We limited out on flounder, tossed back a few more, and his 4.3-pounder won a thousand dollars. Not bad for murky water jig fishing. We caught a few trout, too.

Sometimes his local Sabine Lake even has clear water, which certainly helps the fishing there. Years ago when big winter trout were discovered in the deeper end of Sabine Lake during a winter of unusually clear water, local boats discovered serious trout action while jigging 20 feet down. It was easy to hang up on the ancient oyster reef still down there, unharvested for generations, jagged perhaps as a coral reef, but it held many big trout. Pete Churton from Beaumont joined the jigging fleet and tried out a big, plastic shrimptail jig "made by a local doctor," and with it landed a trout that was fat and 33 inches long. He weighed it in Port Acres on what turned out to be badly-registered scales, then turned the fish over to a taxidermist. Everyone said it was the biggest trout they'd seen in 40 years. The ponderous fish hangs on his wall today, a non-record. If his trout had grabbed the coveted state record away from South Texas, history would have been altered: Thousands of trailered boats would have poured east out of Houston, instead of southwest. Thanks to a simple jig worked deep.

Jigs held an early popularity for us at the jetties, but gravity proved relentless; leadheads and granite rocks are soon united. All it took was a moment's lapse, and we were hung up. For that reason, we switched to slower sinkers like spoons or plugs. We did nail some big boxes of winter sheepshead with homemade mylar-tailed jigs, sweetened with a pinch of shrimp. We lost a few jigs, but there were spots so crowded with sheepshead on foggy winter days, they didn't give the jig a chance to settle in the rocks.

Just off the beach with respect to tarpon, even the successful Coon-Pop is a jig, though heavily modified, the hook snipped off at the curve with bolt cutters, and a large circle hook wired on top of the leadhead. The tail is always plastic with extra action, like a twister tail. Without this lure, tarpon fishing would be very different off Texas and Louisiana. Set out a spread behind the boat, and bump troll. How else can you present five lures at once to a passing school of tarpon, with multiple hookups?

The list of marine species attacking jigs within sight of the coast is impressive. There are Spanish mackerel, ling, kingfish, jacks, bull redfish, ladyfish and tripletail. Even big trout will hit jigs off the upper Texas coast; we've climbed state-water platforms and "doodle-socked" homemade jigs inside, lifting a number of kicking three-pound trout to the catwalk above. Back in the day when funds were tight, we simply popped an invasive cattle egret or two (out of Africa) with a .22 along the roadside ditches, plucked the white feathers, and easily colored them with Rit dye. Wrap a bundle around a 3/4-ounce leadhead, and offshore we went; for once we didn't have to buy more tackle at Gibson's. On one trip we had two Igloos full of big trout, caught with pink, homemade jigs. One trout was so big that day, we took a shot at him with a short gaff, since we never carried a net offshore. Missed him and he threw the hookthe only trout we've ever tried to gaff.

Tempting offshore trout is fun, so last summer I tried it again, this time with a big spin rod and 65-pound braid line. When jigging inside these tight structures, you really have to horse your fish, though admittedly trout cranked up from 30 feet down haven't been too difficult in the past. Hook a ling or big tripletail up there, and "It's just you and him." On this day there were a swarm of big ladyfish following the jig and I decked several, then noticed a nice slot redfish in the swarm. So, I lowered deeper, worked it slower, and bang! It was a serious fight in close quarters, and that red lathered the water white. Then with the rod I had to lift it maybe 12 feet straight up and over the guardrail to the narrow catwalk, where it danced but was always steered back to the center. Two more reds followed, each 26 or 27 inches long. By then a sore shoulder was fast taking the fun out of lifting redfish that high, and I was pushing them overboard, where they happily dove back down. I didn't care to handline redfish that high, not with bare hands and braid line. Thirty yards away and down below in his boat, Pete was slinging his usual one-ounce silver spoons, and jigging them at mid-depth. He'd landed a king and several Spanish.

Even in 50-foot depths offshore, a variety of jigs can help. I've always got my eye open for pompano out there, and keep a few of those short specialty jigs handy. A pompano jig is quite short to accommodate the pomp's small mouth. It was these little pink and white creations that yanked 20 pompano into the boat last fall, near the beach. Which was a surprise; we've been catching them offshore at platforms in about 50 feet since the 1970s, though we tied our own. These small jigs aren't much good for anything else in green water, except getting hammered on and cut off by Spanish mackerel.

It's further offshore where size matters. From 50- out to about 250-foot depths, the 1 to six ounce leadhead jigs are the norm, working fine on red snapper, amberjack, grouper, king and ling, even a wahoo on occasion. And of course mahi-mahi will attack small jigs around the weedlines, as will tripletail.

The standard jig out there for years, if you even saw one, weighed two or three ounces, and had a tail of mylar or bucktail. A few were for sale in the stores, but we bought ours in bulk from Miami, where they were hand-tied. We then dipped the heads in marine resin, to make them bullet-proof around toothy critters. White was the favorite. Today there is far more variety in offshore jigs; the Snapper Slapper, made in Texas City, is really a modified jighead without a traditional hook embedded in the lead. Instead, it carries a couple of strong, bad-ass tethered hooks that simply lurk in the bushy tail. They're very effective on big snapper, but a number of offshore species have been taken with them. Last summer we boated 42 "sow" snapper at one stop using the Slappers, keeping our meager limits, before a tired crew member spoke up: Let's go try an anchored shrimpboatWhich we did, and that's where a horde of jacks, bonito and one cobia descended on us

Also available are "heavy metal" jigs, sticks of metal up to a foot long, that sink very fast. They carry one or two tethered hooks at the head of the lure, instead of the rear. This February, an angler fishing with Capt. Brett Ryan in Louisiana caught a 116-pound amberjack by jigging one of these, in this case a 7-ounce blue Williamson jig. I plan on trying more metal jigs this summer, because last year we were able to catch other species with them while on the snapper rocks, such as kings and grouper. You simply let the metal jig fall through a cloud of big snapper halfway down. They tugged and pecked at the metal jig, but turned loose if you didn't set the hook. Finally, reaching bottom, the grouper had a shot. I've seen the pros nail amberjack with metal jigs, but it helps to have a long rod, which provides a better sweep. They snatched that jig up at least eight feet, let it fall, and bang! The entire partyboat was hooked up. AJs lay in heaps, and one guy finally landed a 38-pound kingfish hooked 150 feet down, the deepest kingfish I've ever seen brought up.

These same metal jigs have caught plenty of grouper in 800 feet of water, and perhaps even 1,000 feet, without using heavy tackle. You just need zero-stretch, braid line on the reel; detecting the bite is similar to jigging only 30 feet downthe only difference is the long drop and the fight's endurance. Jigs are the only feasible way to reach these fish on lighter tackle and without bait.

The range of jigs used in saltwater is considerable, and matching proper weight with the job is crucial. What about manta rays on the surface during summer, with ling swimming beside them? Even a one-ounce jig will sink from sight in murky water before ling can react, despite a high rod tip and frantic reeling. For that you would need a colorful, slow-sinking jig that ling can turn and pursue. There is just no way to predict what you might encounter out there, and that's why we carry such a variety of these colorful creations.