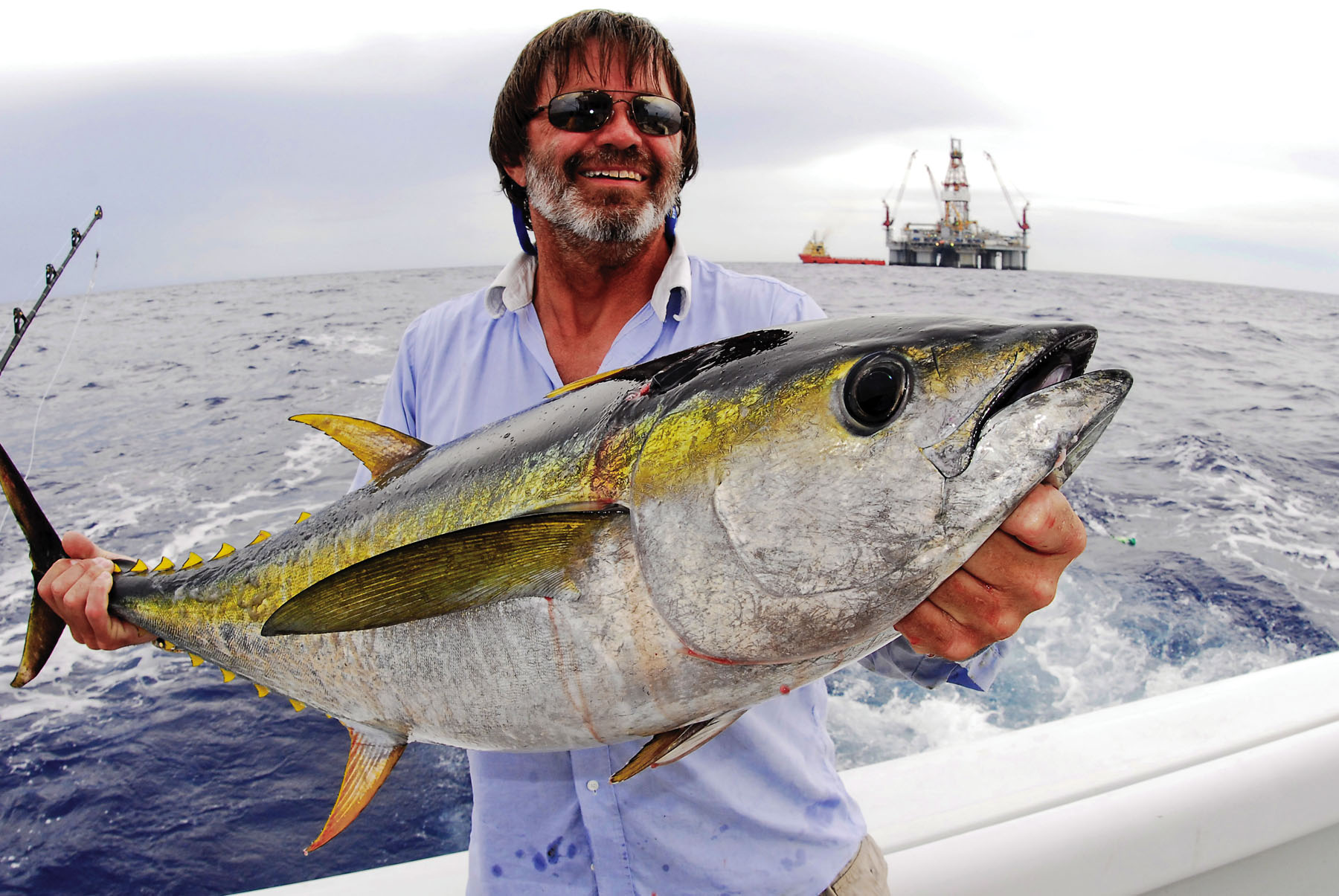 Yet another yellowfin tuna caught in daylight, as we’re leaving a platform and heading further west. No time to stop…
Ever wonder what it's like, crossing the wide Gulf of Mexico? There's a lot of water out there, out beyond the "tuna rigs," the deepwater floater platforms some 100-130 miles out. Which is about one fifth of the way to Mexico. Five hundred miles straight across, if you start from New Orleans, and seven hundred if you leave Texas, round the Yucatan peninsula and head west for the popular fishing ports of Isla Mujeres, Cozumel or Playa Del Carmen.

Even in winter, it's shorts and sandals weather in the Gulf, if you head far enough offshore. Fish perceived as summer species, like mahi-mahi (dolphin), marlin, tuna and wahoo are all hungry out there in winter. Sometimes the year's first marlin off Texas is caught on New Year's Day only 50 to 80 miles out, an honor to the first boat that rightfully claims it.

My own Gulf crossing was a great trip with flat calm water, even though it was the first few days of July. Many of the Texas billfish boats cross in February, following cold fronts offshore as they peter out, and before the next weather system arrives. Once in Mexican waters, they're ready for the spring sailfish season, peaking in April. It's a system that's worked many times, but with the Gulf there are no guarantees and the going can get tough. We have friends in POC who tried to sail across during spring and it took something like 12 days in rough water; they had engine trouble, head-on seas, while the Gulf was smoky from fires in Mexico–a real ordeal. Another friend on his first crossing crashed his Bertram onto Alacran Reef at 5 a.m., hitting the only island (atoll) out there, totaling his boat. The Mexican Navy stationed on the island hosted them for several days before turning them over to the federales in Progresso about 100 miles away on the mainland, and it wasn't as much fun as it sounds. They got home with only the clothes they were wearing...

Very small boats have crossed the Gulf. One crossing was accomplished by Capt. Billy Wright, who by himself drove a 23-foot SeaCraft the 700 miles. I think it was in June: His friends in the bigger billfish boats were headed back to Galveston at a slow, economical speed, leaving a day ahead of him, carrying extra fuel. Billy caught up with them in mid-Gulf and they had a fuel transfer. That would have been dicey in rough weather, but Billy said the Gulf was so glassy calm, he could look overboard and see his face reflected on the mile-deep water. The Customs officer in Galveston was skeptical, that his last port of call was (if memory serves) Isla Mujeres, which isn't even on the Gulf, it's on the Caribbean side of Mexico.

But on to my own Gulf crossing, something that had been on my bucket list for many years. I was aboard a Port Neches-registered 55-foot Bertram named Bout Time that docks in Port Aransas. It's skippered by Capt. Pete Hebert, and we go back to our Port Arthur days of making five-day trips beyond the Flower Gardens in 1982.

Brian Knutzen and I are assigned the 2 to 4 a.m. "dog shift" during our four-day Gulf crossing, and each night we liven it up with four-speaker music, such as the best of Marty Robbins and other tunes. With no lights around for more than a hundred miles, the Milky Way stretches wide. It's unreal. None of the crew members below decks hear our music; all lay comatose. We're content to keep driving through our shift until daylight, scanning the horizon with light-gathering binocs. We're heading for Louisiana's oil rigs way up north, parked in mile-deep water, before we turn west for Port Aransas.

Dawn finally arrives. Too fired up to sleep after sipping cowboy coffee, I clamber down the ladder and set out two rods. There is, after all, no use cruising in daylight at eight knots (the fuel-sipping speed) without dragging hooks behind the boat. For Gulf crossings, our vessel's bread and butter lures are softhead medium-range plastics, and so I feed an Australian Pakula and then a Custom Charley Fisher back into our wake. As I set out the second rod and slap the reel in gear, the rod abruptly doubles over. Slack-jawed, I watch a blue marlin jump repeatedly astern, and soon enough the sun also rises.

Any good captain, no matter how tired, will lurch awake when the engines change their tune: When the boat slows, Capt. Pete sticks his head out of the salon within seconds, expecting to hear bad news of a floating rope in the prop or some such trouble. Instead he is pleasantly surprised to find a screeching reel and a jumping marlin. We sound the boat's siren and crew members tumble from their bunks. All hands! These guys (including Sean Scott, the owner) earned their sea legs years ago while fishing out of Port Arthur.

"Man, that fish must have been following us half the night, to hit so quickly. This might be the earliest marlin [in the day] we've ever caught," says Pete.

Soon enough the crew are at their stations. Pete climbs to the bridge while demanding coffee, and we're after the marlin, which jumps several times in a splendid fight. Near the boat, it lights up off our stern, thrashing whitewater, a fish 180 pounds, maybe more. The sun climbs higher. The marlin is well hooked and we can't readily pop the hook out for a minute or so, even as two guys hang over the side and struggle with it. This fish is patient but finally whacks its bill, tapping Brian on one frame of his sunglasses, which saves his eye but still earns him a bruised cheek. You can't be too careful with these fish in mid-Gulf, with the nearest Doc-in-the-Box several days away. Our lucky pineapple from Mexico swings at the cabin door and so far, it's working like a charm. Sort of.

Directly north are the deepwater drilling rigs off Louisiana where few boats visit; we'll fish the Auger, Magnolia and Gunnison rigs among others, on the route back to Texas. The plan is to troll around the deepest of all, before turning west for Port Aransas, stopping at as many rigs as possible. We won't see a single fishing vessel during our entire journey until the Aransas jetty on the morning of July 4. Although boat ramps may be zoos on the weekends, there are vast stretches offshore devoid of fishing pressure, nothing but ink blue water.

In mid-Gulf I spot a few acres of thick sargassum weed, the boat turns and we soon have a couple of 30-pound mahi in the box. After that, a white marlin released in open water. It is the deepwater platforms that are known for attracting fish, and there you never know if a wahoo, yellowfin tuna or marlin---either blue or white---or even a big dolphin (mahi-mahi) will attack one of those plastic baits rippling in our wake.

Usually one will see all of these species and this trip is no different. Yellowfin tuna, for instance, we caught them day and night around the platforms, our only company an occasional crew boat tied up nearby. As we trolled past one, its captain inquired on the radio how we had the range to fish so far offshore. Perhaps he'd noted our homeport of Port Neches. "Oh," sez Pete, "you can cruise a long ways at eight knots." When we told them we were out of Mexico, they were silent. A Mexican flag still flew from our tower, after all, and our lucky pineapple certainly looked tropical. Our boat's engines loved that thick diesel fuel from Mexico, too.

So it went as we picked our way west from one platform to the next. Catching a tuna here, a marlin there, sometimes a wahoo. Day-trolling for tuna meant using Hawaiian jethead plastics, which pull deeper. Sometimes we ran 30 miles to the next rig, only to have it shrouded by a rain squall. Three circles in the rain, and it was on to the next spot.

A full day of running and gunning the rigs, and then darkness fell across the Gulf. At night these big platforms are swathed in flood lights, attracting many pelagic fish. Bursts of whitewater here and there meant yellowfin tuna were busting baitfish. Flyingfish are drawn haplessly to lights, as are squid, and a big working oil rig offers the most artificial lights these small critters will ever see. These structures become a feeding ground for night marauders, especially tuna.

Were any of those splashes blackfin tuna? "No freaking way," says Pete, watching the big splashes. "We're way beyond the range of coastal blackfins; the water here is too deep."

The action went on and on, too much to post here, and our voyage must have covered closer to 900 miles, since we didn't take the shortest route. Our total bag on the return trip was two blue and one white marlin, a dozen yellowfin tuna, a wahoo and five big dolphin. One marlin hit at the peaks north of the Yucatan, one in mid-Gulf and the third at a Louisiana platform. Not too bad a trip, because Bout Time's best crossing for marlin is seven hooked and three landed. And our trip was so calm, it was like fishing on a bayou.