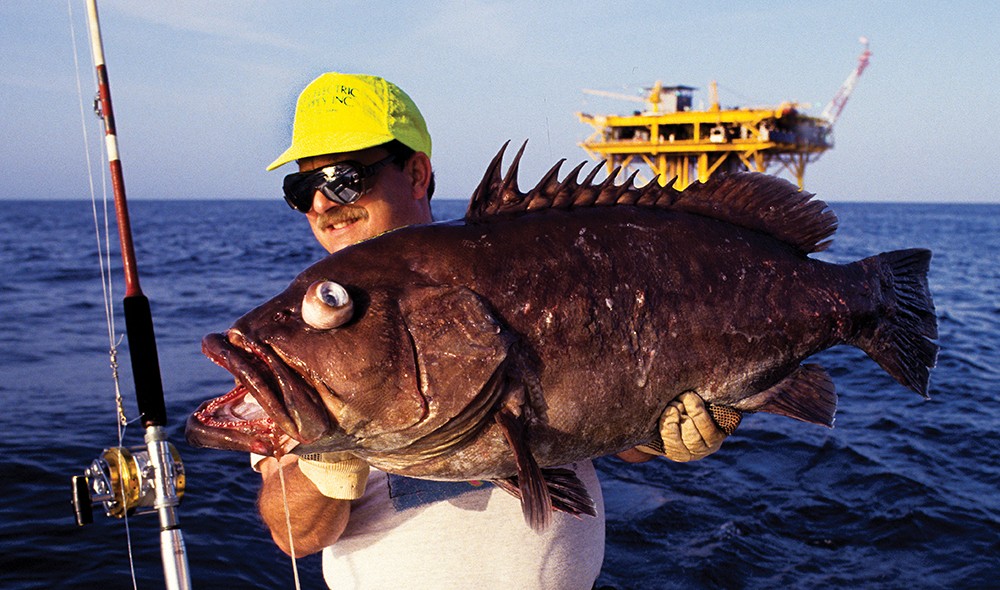 This hefty snowy grouper was caught near the Cerveza Rigs off Galveston, using manual tackle.

Red snapper season is short and tightly regulated, but there is a reliable year-round offshore bottom fishery for deepwater species that doesn’t get much press, for yellowedge and snowy groupers, queen snapper, and the golden tilefish.

The groupers mostly live over soft bottom or sand; queen snapper are caught over large rocks, and the tilefish live in “rabbit hole” burrows on underwater hillsides.

All of them make excellent fare on the dinner table. The only problem is, they live in deep water. How deep? Like 500 to 900 feet down. To catch them means strictly drift-fishing, and never using an anchor. Or one can tie up to a deep-water platform or its buoys that are parked in the right depths. (Forget the floater oil rigs in much deeper, often mile-deep water).

Using typical offshore trolling rods (or special electric deep-drop bottom reels), this is not a sport you want to pursue all day, but drift-fishing does offer a nice break from offshore trolling. And it puts quality “eating” fish in the box.

The sportiest method for taking these fish is by using a stiff jigging rod filled with 30-pound braided line. Drop a heavy metal jig down about 600-800 feet and start jigging away. You can feel a fish hit, because that braid has zero stretch. Working that fish to the surface requires lots of pumping and winding, of course. At least they become increasingly buoyant after coming up the first 100 feet or so. The gas inside each fish doubles every 33 feet. Bring it up 500 feet and said fish is on a one-way ticket to the surface, even if the line breaks. They’re likely to bob to the surface 20 feet away on the wrong side of the boat, like a runaway buoy. Amazingly, a decent grouper can easily buoy an 8-pound iron weight.  There is no catch and release here; even the fish’s scales may sizzle and be ruptured, let alone the eyes and stomach.

The easiest method is to use electric reels; send those baits deep, hit bottom, set the reel in gear and chill out for a little while. As long as your weight is on bottom and the circle hooks baited with something fresh and tough, ideally fresh chunks of barracuda or tuna, something will bite it. Refrain from using frozen mushy “cigar” minnows; you want bait that will really stay on the hook.

Deep drop bottom rigs can be purchased, but we always made our own using big, tough circle hooks. Buy a spool of 50 yards of Ande leader in the 200-300 pound strength range. Use crimps instead of knots. A sturdy swivel at the top, and an 8-pound “sash” or window weight at the bottom. I wrap the weights tight with duct tape, for less drag in the water. (For our younger readers, the heavy windows in older homes had window or sash weights built inside their frames, to help raise them. They’re getting harder to find, these days, but some tackle companies now offer heavy, streamlined lead weights.) We never snagged and lost one of our own weights on bottom, but probably never fished around rocks, just sand or mud bottoms around deepwater oil rigs sitting in 700 to 900 feet.

These bottom rigs can be tied to any offshore trolling rod with a Shimano or Penn 50 size reel, as long as the reel holds plenty of 50-pound line. Cranking up these grouper isn’t difficult if you don’t mind the reeling repetition, because the fish become so buoyant on the way up. It isn’t all gravy, however. Pulling up deepwater sharks and nightmarish, five-foot eels with rows of sharp teeth isn’t as much fun. Or unhooking them, for that matter. With the eels, it’s best to keep them in the water and cut off the hook, and let them float away like a big rope. Pulling up no fish, just the iron weight, is a chore as well. I’ve used three different baits out there—eight-inch strips of fresh-caught blackfin tuna and barracuda and then once, frozen silver perch, which look like croakers. All three caught quality grouper and tilefish. Two official state records were landed on our boat. Deepwater fish are not picky down there—you just have to get bait in front of them.

Getting out to deeper water on the windy Texas coast is part of the challenge, and the overall lack of fishing pressure is one reason there are many fish out there. It’s quite the opposite of fishing deep water within sight of Miami or the Florida Keys. Reaching deep water off the upper Texas coast requires the longest run of all, but is still reachable, especially later in summer when the Gulf calms down. We once ran my 23-foot SeaCraft out of Galveston 90 miles to the lone rig east of the Cerveza rigs, I don’t remember the name of it. Got there at night and tied up. They were sandblasting the rig above, and our hair soon turned gray from the fine grit. Fortunately my boat had a small cabin and we slept inside. Next morning we caught a state record yellowedge grouper. Not much else going on out there in November, nary another boat, so we headed inshore to Stetson rock and fought hordes of 25-pound kingfish until we were tired. Running that far in a single-engine boat isn’t recommended, but we were young and hungry back then.

Texas’ middle and lower coast are closer to deep water and all those bottom fish.

Deep water off the middle coast offers hundreds of square miles of good bottom out there, even large rocks. The lower coast has deep water closer to boat ramps, but the continental shelf drops off sooner. Once you reach 1,000-foot depths, it’s too deep for most of these species.

Braid line versus mono: Fifty to 80-pound mono works fine, but you won’t be able to detect a bite; that much line out stretches like a rubber band. Our strategy was to drop baits and wait 20-30 minutes, and then reel back up. Sometimes we’d get one faint tug on the rod tip, but not much. As mentioned earlier, braid will telegraph nibbles 900 feet down, which is useful; you can start reeling right away if the rod takes a bend. Braid of course is vital if you’re jigging that deep. I know for a fact that yellowedge grouper are commonly caught with metal jigs; there are fishing guides in Key West who often use this technique. In many places like Key West and The Bahamas, it’s deepwater grouper that provide reliable action these days, versus the more heavily pressured shallow water species.

The dazzling queen snapper, often three feet long, looks like a huge vermilion snapper. They favor big rocks in deep water, which is a risk for dragging along bottom weights and hooks. Like the vermilion, they favor smaller baits, unlike those big-mouth grouper.

Some deepwater anglers have a saying: “No light, no bite.” They attach to the leader a small, flashing strobe built inside a fiberglass tube that can withstand tons of pressure from deep water. We never fished with lights and did well enough, even at night. As for daytime fishing, apparently it’s still pretty dark down there, not much sunlight filters that deep, except a dim twilight at mid-day when the Gulf is calm.

When exploring new bottoms, you will need a decent depth finder with a very narrow beam, especially when the bottom may be the equivalent of three football fields below. If you find a small spot and want to drop baits, you need to know speed and direction of the current, to drop baits accurately. Some of the guys are very good at this, even hitting a small rock with a single big bait in even deeper water where swordfish prowl. If the current is fast, you might pursue something else. A fast current can make those baits miss the target and will also raise an 8-pound weight off bottom, above the fish. You can either search for productive bottom, which takes time, or fish a known, proven area. But not too well known; these deepwater species grow slowly because the water is very cold down there, and without seasons. A well-known spot can be picked over.

Like anything else, finding a new patch of undiscovered bottom habitat would have instant results, once those baits arrived. It’s just a different ballgame, fishing that deep.