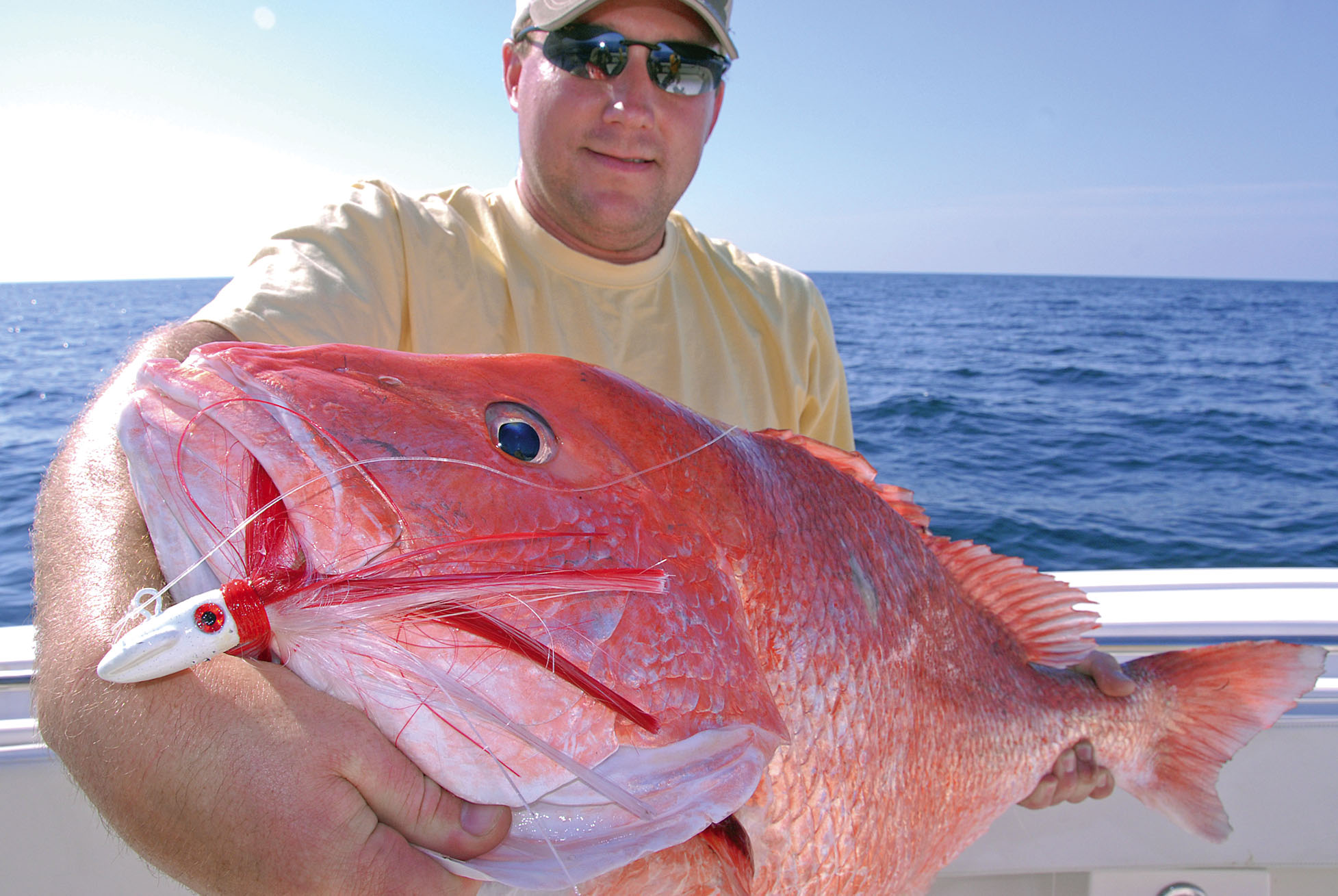 After fishing the opening weekend of this year's derby snapper season, with only 40 days allowed during the windiest part of the summer, we returned at day's end worn out and with our limits of two fish apiece. There were a lot of snapper offshore: Early on, one of the guys brought up two legal fish on his Snapper Slapper jig, and we joked "you're done for the day." We were far offshore in Alan Reynold's newly acquired 38-foot Fountain, a three-year old boat that had never seen a fish; it was used as a booze-cruiser on the ICW in Alabama.

For the boat, it was time for more serious work: Seven of us, using jigs, hooked and released a number of big snapper until we had 14 big ones in the box, each weighing 10 to 22 pounds. As the last fish slid into the cooler, a 14-pounder then was landed and I tossed it overboard. All released snapper were carefully deflated and swam back down for the commercial harvest that will continue all year. Oh well. At least this June's weather didn't beat us to pieces offshore. Apparently the Feds can't rely on a SW wind blowing 15-25 knots every June off Texas.

It would seem that bad weather is another aspect of the recreational harvest plan. Commercial fishermen, several hundred of them, are allotted 51 percent of all red snapper landed in the Gulf. Since 2007 they've operated under a catch share system, where they can fish all year in good weather (or price spikes) until they catch their quota. Meanwhile hundreds of thousands of recreational fishermen, allotted 49 percent of the catch, are required to fish in normally windy June, taking their beatings offshore, each for their two daily fish. When snapper are plentiful enough to be caught two on a single jig. Gulf charterboats must fish all 40 days to keep themselves in business during the slow times. Captains and boat crews work to the point of exhaustion, which no doubt affects public safety offshore. What's wrong with this picture?

The red snapper population has rebounded better than anyone expected, but bag limits are now so severe, its impacting angler participation. Perhaps attrition in the recreational offshore fishery is another aspect of the federal snapper management plan; it certainly seems that way. Their line of thinking may be that if enough boat owners sell their rigs and turn to other pursuits, the fishery will rebound even more. The financial impact of that to coastal communities and small business owners would be expensive, to say the least. Our recreational fishing interests have not been persuasively explained in Washington--- something has gone haywire up there.

The same goes with the billions now being spent to harvest Gulf platforms, with more than 600 of these artificial reefs disappeared in the past several years. The big "rig killer" barge we photographed arriving in Sabine Pass around Memorial Day turned right back around in two days, towed back out for more grim work. They're dynamiting platforms as fast as possible, before a moratorium is declared. You can bet there is serious lobbying going on, to keep that process alive.

As one worker in the rig-removal business told me in May, "We just wrap each rig pipe with primer cord at the bottom, set them off in sequence, the big crane lifts the severed rig onto a barge, and it's towed away somewhere. All in one day. They won't let us take pictures of the floating snapper; and we don't want to lose our jobs doing that."

One would think that acres of floating dead snapper might retard recovery of stocks, but if the recreational fishery is squeezed tight enough, the snapper population may recover solely from recreational sacrifice. Snapper will bounce back, even if prime habitat is dynamited and removed forever. So goes the thinking in Washington.

Texas has long allowed a four-fish snapper limit out to nine miles offshore, and that's helped catch fish on a year-round basis, though the platforms within that range are picked clean during the summer season. That's also created a loophole of sorts, where fish caught in federal waters are claimed as state-water fish. Game wardens can only head-scratch at the number of 15-pounders now caught within sight of the beach. The states are even contemplating managing all snapper landed in their ports, regardless of where they're caught. Everyone knows that state-managed fish stocks are quite stable, compared with over-harvest, then drastic closures and tiny bag limits prominent in federal waters. Charterboat captains depending entirely on making a livelihood fishing in federal waters are walking on thin ice.

At least Texas continues to mine data on the snapper catch, an ongoing program dating back about 30 years, long before the Feds began to buy a clue. With our tired crew on dry ground and boat resting on the trailer, a local team from TP&W, led by Jerry Mambretti, dug six of our big fish out of the ice, measured them and asked very pertinent questions. Ice digging duty and measuring was conducted by a cheerful, lovely intern from the Lake Charles area, who was no stranger to fish, apparently. Her sunny demeanor was enough to brighten our long, sun-and-sea blasted day, after running so many miles offshore. (Sabine requires a long run to reach prime snapper rocks).

We certainly didn't have many fish to clean back at the house. It was tally up the day's damage and awful fuel bill, take your two snapper and go home.