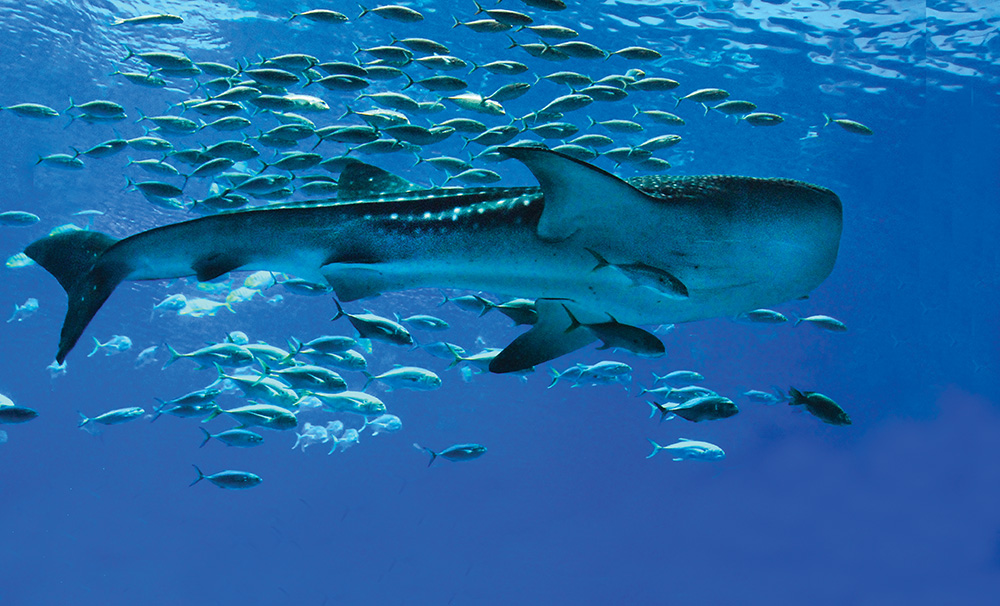 Whale sharks easily reach 30 feet and more. These harmless giants show up each summer off the Texas coast.

Most Gulf fishermen, if they live long enough, see some odd sights out there over the years. Strange things seldom photographed until the advent of Smart-phones suddenly made photographers of everyone.

Shrimpers working the Gulf for years see all sorts of odd critters brought up in the nets, and also shark feeding frenzies. Sometimes there are so many sharks, they climb over each other’s backs to get at the goodies. One shrimper even told me he was never going back out there at night after seeing strange lights in the sky.

I can recall some highlights over the years, along with my fishing buddies, and thought I’d share a few.

One day we were offshore 20 miles, heading back to Port O’Connor. Earlier, acting on a tip, we’d been further out there looking for a whale shark reported at Rig 669, sitting in clear blue water. We’d tied to the rig but saw no shark, even after snorkeling for an hour. The big brute was gone, just gone. After fishing, we then headed inshore and after a few miles noticed  the blue/green color change up ahead. Closer, and I saw a shark fin sticking out of the water to port, and another to starboard. Was it two sharks? It took several moments to realize it was the same fish, so I chopped the throttle back to neutral just as we passed between the two fins. Bang! The big outboard’s lower unit was knocked out of the water, as we crossed right over the shark’s back. In neutral, we all looked astern as a huge whale shark, now fully awake, began thrashing its tail. It took a few moments for it to pick up speed, before it sounded like a submarine making a crash dive. Our nephew was impressed, but disappointed he wasn’t able to swim with one. We waited around for a few minutes, but never saw it again.

Longtime friend Dale Fontenot of Vidor has been fishing out of Sabine Pass since about 1960. He says the strangest thing he ever saw out there, was an acre of “sow” red snapper weighing from 20 to 25 pounds, feeding on the surface, moving along slowly. “Feeding like a school of bass at Toledo Bend,” he said. He couldn’t see what they were feeding on; there were no jumping baitfish. Every jig and spoon they slung at the school resulted in a hookup. It was hard work and a reminder to always carry casting rods when offshore. Dale says it was 20 years ago and may have been September. If so, we can surmise it was a school of big fish ready to begin courtship, gathered up for their annual spawning ritual that happens each September.

On another trip, Dale and his longtime fishing buddy Pete Churton spent the night way off Sabine Pass, tied to a production platform in about 300 feet of water. Right at sunset they were catching kingfish, and cranked a typical schoolie king alongside the boat. To their shock, a massive kingfish of six feet, at least 75 pounds, came from nowhere and chomped down on the small king, chewing on it right in front of them. They said there was no chance it was a barracuda. On yet another trip in 60 feet of water, Pete saw a 30-pound kingfish skyrocket and land on a small production platform, slamming on the catwalk before finally flopping back in the water. (You know the kings are biting, when they’re jumping 10 feet up on the platform.)

Another kingfish story: One day the Port Aransas partyboat La Pesca was anchored offshore and they noticed a disturbance far away on the glassy Gulf. It looked like a school of baitfish approaching. The commotion drew closer, heading right for them, and the captain realized it was a massive school of kingfish jumping and feeding on something. As the school drew near, the captain ordered everyone inside, which must have been difficult, with so much action about to happen. In the cabin they watched as kingfish flew past the windows and heard others thumping into the hull. When the storm of kingfish had passed, all ventured outside and found seven or eight kingfish still flopping on deck. These were schoolie kings of about 15 pounds, nothing big. But potentially dangerous when airborne.

Getting hit by a jumping kingfish—now that’s a serious WTH moment, and I consider myself lucky to have survived that very thing. I was treading water next to the boat, 50 miles off Galveston at a weedline, making underwater photos of hooked mahi. I had my mask off, talking to the guys up in the boat. Someone above me skated a jig across the surface, ready to make another cast. A kingfish jumped at the jig but missed, flying a good 15 feet through the air, striking me on the back of my neck. I was stunned by the impact and blinded by the splash, but somehow my neck was only red without even a scratch. It was time to get back in the boat.

In June 1983, we’d launched our 14-foot Monarch at the fish pass just south of Port Aransas. It was already sanding in, and we had a difficult time launching; we literally had to carry that boat to the water. Cranked up the 15-horse outboard and idled around the north jetty and stopped about 70 yards off the beach. It was a flat, calm day with lime green water. Over on the beach, guys were shoulder deep, throwing plugs for trout. Nearby, perhaps 20 yards away, a trout floated upside down; somebody had released it. A lazy fin circled the trout, a fin about four feet tall—so tall that it drooped. At first we thought it might be a manta ray’s wingtip, but then there was a swirl and the trout was gone. Alarmed, we realized the big shadow was headed our way. Passing slowly beneath us, the hammerhead shark was longer than my boat, and we sat very still until it was gone. His hammer appeared to be five feet across. It isn’t every day a great hammerhead comes calling only a few feet away, with only a paper-thin layer of aluminum between you, and him.

Back in the early ‘70s during summer, three of us were recruited to fish on a commercial snapper boat named Defiant, docked at Rainbow Bridge Marina near Port Arthur. The weather looked sketchy but we headed out anyway. One mile short of the Gulf, inside the Sabine jetties, a tremendous waterspout appeared from the west, crossing the channel ahead of us and hitting an outbound Texaco tanker that couldn’t maneuver. The tanker actually swerved 10 degrees to port, from the high wind’s impact. Our captain stopped the boat long enough to watch the waterspout cross the east jetty rocks, and then we proceeded. Our trials and tribulations were many on that three-day trip. We eventually returned in a tremendous midnight storm, our boat’s transmission stuck in forward gear. That following winter, Defiant broke in half while being towed in by the Coast Guard.

I’ve also seen a waterspout form under a pure blue sky, which was very strange. We were paddling in Canada across a lake, when the water 30 yards directly ahead began churning white for no reason. It looked like a school of baitfish feeding on the surface, but then whitewater rose up into the sky in a vortex…By then we were paddling in reverse; the last thing we needed was overturning with all our camping gear in deep 40° water. The waterspout twirled a hundred feet high and we must have been slack-jawed. It then headed to starboard, reached the shoreline and struck a big pine tree, giving it a good thrashing. It looked like a 50-mile an hour gust hitting that tree. It was the first of our eight-day paddle across 19 lakes. That same morning the guys, who’d made the trip many times, had discussed offering up tobacco to the Chippewa gods, when we set up our first campsite. At the time it sounded hokey to me. But you can bet it became a top priority that first evening. People die on those lakes every summer from sudden windstorms.

One day we’d climbed aboard a tiny gas platform off Johnson Bayou, Louisiana. It was a hot August day in 1976, the movie Jaws was in theatres. We had our choice of many shallow water platforms, and could catch several trout at each of them, doodle-socking gold spoons near bottom about 20 feet down. We looked up from our work and there, about 60 yards away, see this orange buoy cruising by, half-submerged, heading east. It had to be a commercial longline buoy from further offshore, broke off by something huge. Was it a bluefin tuna or a big mako? We scrambled after it, abandoned our tackle and trout on the rig, jumping down into my 15-foot Thunderbird and took after it. Caught up with it, eased closer and dragged that 36-inch buoy into the boat. We got you now! Tied the one-inch yellow poly rope to the boat’s centerline bow cleat. However, whatever was down there towed my boat along without slowing at all...I put the 70-horse Johnson in full reverse for minutes on end until the boat was shaking, but our forward progress never changed, we kept cruising along at the same three knots. We tried everything but nothing worked, it was always three knots straight ahead. After a tough half hour (my buddy had rope burns from coiling that fine expensive rope in the boat and then having it ripped back in the water), I finally looked up at the horizon and there, a half mile away, was a 150-foot oil company workboat with a small crowd of people gathered on the stern. They were watching these two idiots in a little boat, wrestling with their seismic tow buoy.