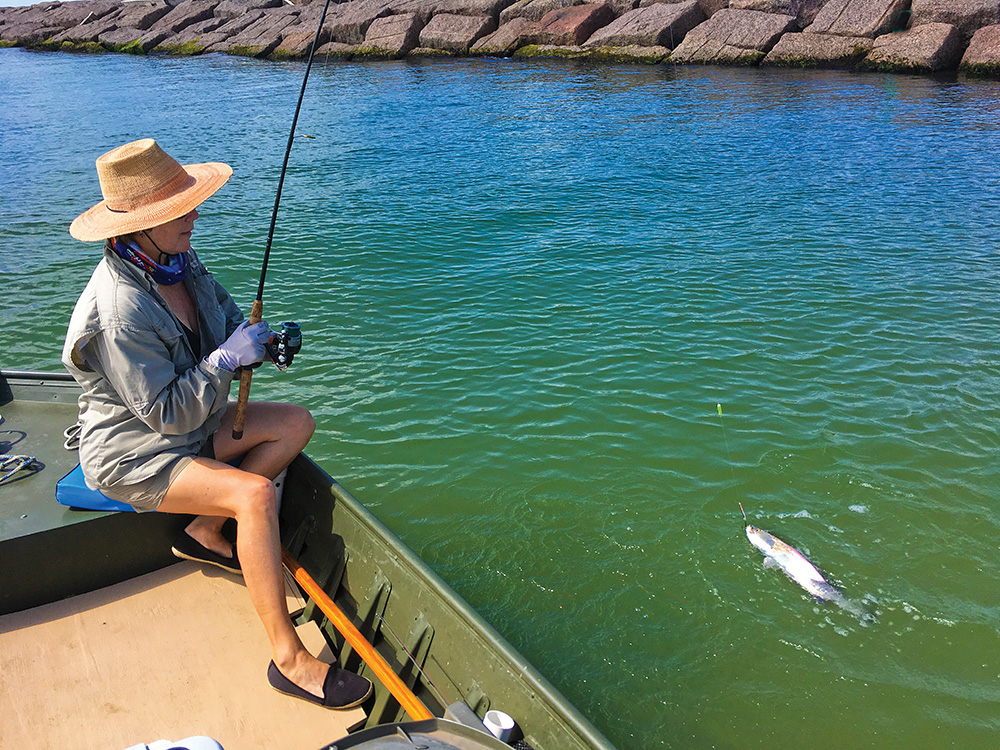 Slinging spoons over calm green water and schools of passing mullet—it doesn’t get any better than that when you’re a jetty rat. On this day we discarded live bait hooks and tied spoons directly to the same leaders rigged with rattle tubes.

A coveted spoon has returned to the coast, a serious little slab of metal offered up in multiple colors that caught us fine trout and mackerel this summer. Called the Dixie Jet, surf-wading anglers slightly older than me remember it well from back in the day, while working the suds from Bolivar or Galveston and further south. The Dixie lineup perfectly suited the needs of Texas surf waders, who often had to drill long casts to reach green water. (Chocolate water is still considered nearly useless for artificial baits). In our surf along the muddier Sabine Pass/Louisiana border during the 1980s, I actually climbed jetty towers, just to spot spoon-friendly green water on the horizon.

I contacted a long-time fan of spoons, Houston Chronicle outdoor writer and friend Joe Doggett, for advice on the Dixie Jet. If memory served, he’d written about them with some exuberance years ago. Could I trust my memory? Turns out, I was right. J.D. wrote back:

“The 3/4 ounce Dixie Jet was a “killer bait” in the surf during the late ‘60s and ‘70s, mainly because it has great ballistics into the wind and retrieves with authority amid waves and current. Better look and action (I think) than the wedge-sliced Mr. Champ and Kastmaster. Its big rival was the Tony Accetta 5H (for “heavy”). The 5H was good but the Jet was better.

“Original Dixie’s were made by Schumacher Company in Houston and were triple-plated for exceptional durability… I toured the Houston plant several times and made a point to stuff all available pockets with “test samples.” Silver, gold and copper, with the latter being the real prize for sandy-green water. The Dixie Jet arches like a well-driven golf ball. Remains my all-time favorite surf spoon.”

As it turns out, the Houston company abruptly went out of business in the early 1970s, when the owner was said to have passed away—about the time my crew became serious jetty rats. As a result, we never saw Dixie spoons in tackle stores. Not in Port Arthur Gibson’s, anyway. Instead we used cheap knock-offs made by Acme, which suited our needs at the time. We quickly realized that spoons were by far the most efficient lure out there for filling Igloos, and we lost hundreds of them during 15 straight summers of rock hopping and casting. The more refined, better-built Dixie Jets deserved better water than we fished, which was filled with snaggy rocks, sharp-toothed mackerel and treacherous marine growth that sooner or later sent us all to the ER.

Fast-forward a few decades and we have the opportunity to try the recently re-launched Dixie Jet spoons, now made in Missouri. That is of course freshwater reservoir country, where it enjoys a big following inland. The company is so new that few retailers are located in coastal states, none in Texas that I know of.

With a handful of these colorful spoons (available in 11 colors), Miss Amy and I headed for the surf and jetties this past July and hit pay dirt. After a windy June with too many wave chops and muddy water, the surf and jetties magically cleaned up as soon as the calendar flipped. Which is typical. (Note to self once again: skip coastal vacations in June.)

We’d been live-baiting in sketchy water for weeks, with rattle tubes and circle hooks tied beneath. But on this fine July morning we were pumped to see green water surging into the jetties and piling up on the beach. Such was our haste that we left the rattle tubes in place, cut off the hooks and tied the new 3/4-ounce spoons straight to the same mono leaders. I remember thinking: This is gonna be great! When a 21-inch trout stopped Amy’s spoon on the first cast, well, we’d finally arrived.

Forty yards away sat a single boat with two older guys. Judging from their relaxed body language, they’d just about caught their limits. We could see them casually tossing out live baits. They caught one last trout and then just sat there watching us releasing fish; their faces were too far away to make out expressions as I dropped several 20-inch trout overboard. They watched us stick fish from far and near, with 23 sizeable trout released, and keeping two more that would not have survived. Out of 15 mackerel, we kept three for a neighbor. All 10 sharks were released. With countless mullet of all sizes swimming by in occasional swells, spoons were the perfect choice. The tribulations of a windy June were magically wiped away.

Our fish were caught on five different colors. It was great action, much more fun than soaking sluggish, stationary live baits. We stayed on the fish as long as we could but by 2 p.m. we had to drop our rods and say, “Enough!” Five limits of trout in the boat, all big to not bother measuring, handled as gently as possible and without a landing net; nearly all returned to the water. We only lost one spoon, which is amazing, but some days turn out that way. On other days the mackerel hit differently, causing more serious losses when we use mono leaders. A thin, short length of wire will prevent that, unless they hit the swivel, which should be very small and black.

We started that day with 20-pound mono for leader, increasing to 25 and finally, 30-pound. Why heavier? When trout are on a feed, a little heavier leader won’t slow the action, and it may prevent cut-offs from saw-toothed mackerel.

The Dixie Jet’s treble hooks were big and sharp, though brown, so I haven’t seen how long they last in a corrosive Gulf environment. Anyway, I rinse spoons and plugs thoroughly after a dunk in saltwater. Spoons are built to last, depending on their coating, while treble hooks are replaceable.

In the future, for added wiggle and less line twist, we will add stainless steel split rings to each spoon. This may also keep the knot just out of bite range. And, the leader isn’t likely to be cut during a long cast, against the stamped metal hole in front of the spoon. Even better would be adding a small black swivel to the split ring. Split-ring pliers are handy for that job. Forget using a knife or thumbnail.

Doggett was right when he said, “Spoons used to be top-shelf items. I don’t recall [famous Texas wader] Rudy Grigar being a big Jet user, mainly because he concentrated on the bays (lighter 1/4 and 1/2 ounce Johnson Sprites were his go-to spoons). Incidentally, the greater concave on the Sprite is great for downwind shallow-water bay work but tends to catch onshore beachfront wind and dip and dive erratically in flight.

Countless anglers today have relegated spoons to the sidelines or have never used them at all. Soft baits and plugs have taken over. The soft baits are very effective, even forgiving on the strike, because a fish will hold onto them. But the average strike isn’t nearly as hard, compared to spoons. Soft baits are expendable and I sometimes wonder what a fish does with them, after biting off a piece of plastic. They probably swallow it.

The spoon is a clean alternative, and deadly effective. You just have to believe in them, like first mate Miss Amy who will throw them all day long.

We will be browsing the Dixie Jet web site, before our next trip.