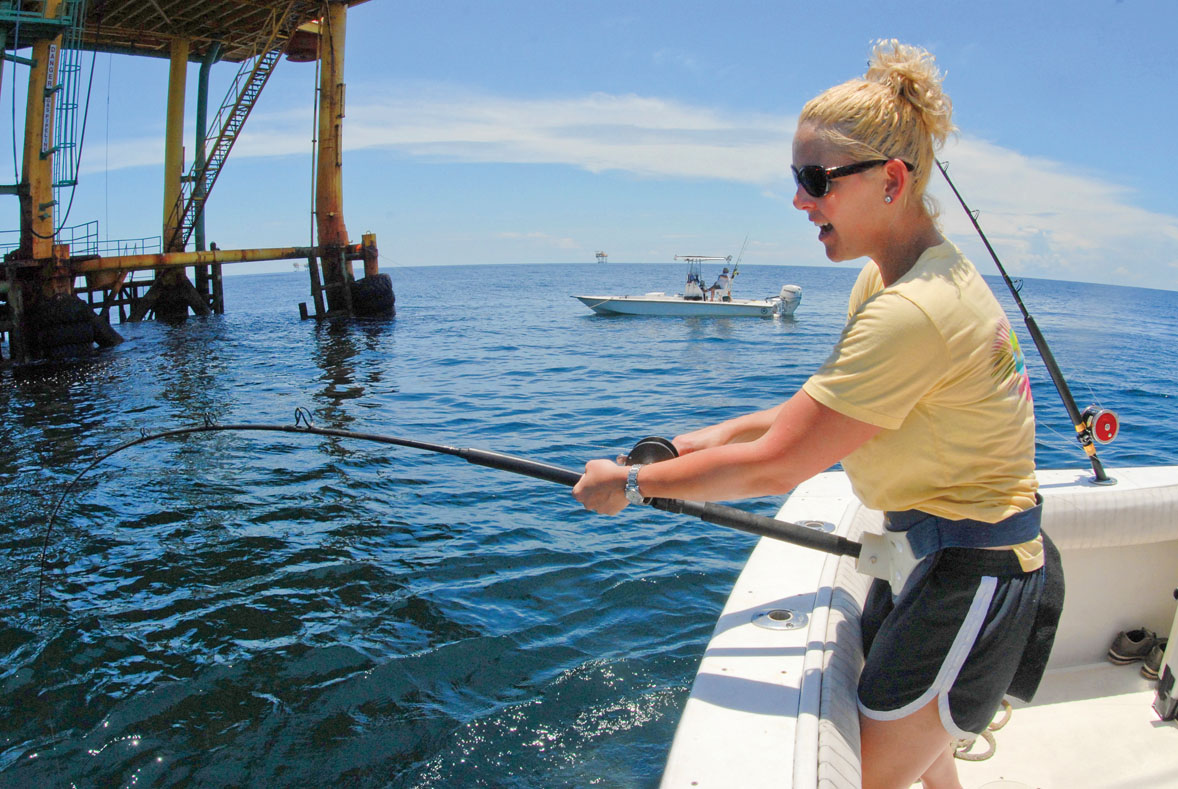 Drift-fishing a platform in a very slow current. Second boat in the background is tied off on a long rope.

Over the years, I’ve tied up to more Gulf platforms than I care to remember. Mostly because I could stand up there on the bow dancing around, and hook up without falling overboard in heavy seas.

The different combinations of wind, waves and current, versus various Gulf platform designs, makes for some colorful tales when attaching a heavy boat to steel structure. I’ve climbed aboard a number of platforms just to get a rope on good structure, though lately not so often. We also used “rig hooks,” of course, even found handy new ones while scuba diving after other boats had lost theirs.

For newbies, rig hooks are basically eight-foot heavy-gauge aluminum pipe curved like a candy cane. You run a rope through the pipe, out the curved end, and tie a knot so it stays there. They’re certainly light enough; you just need someone with good balance and quick footing to hook it to a platform at just the right moment. When mooring, rig hooks are very useful for keeping precious empty feet between expensive boats and steel structure. And some days, you just have to tie up to that platform.

Rig hooks are light enough to be thrown, and if you miss or it bounces off, they’re easily retrieved for another try. Some rig hooks are small, only three feet long, and carry a release wire to reverse them off the platform’s pipe structure whenever it’s time to leave. These are more easily thrown, but overall require some practice. Throwing accurately while dancing on the deck in whitecaps is a useful talent, some days.

Storm and lightning approaching? One option is to moor to the platform and ride it out, even if you need to let out a hundred feet of rope. That certainly saved us one hellish night when 12-foot seas hit. During that awful night our rig hook bounced off the platform two or three times and we drifted away in 900 feet of water. I retrieved the hook and we eased back to the platform, there to re-set the hook in the best possible spot at that moment, realizing that wind and waves were constantly shifting, as it turned out 180 degrees that night. Without that simple rig hook, we would have had to idle alongside the platform all night in an open boat in blinding rain and terrible lightning. There was no way we were leaving that comforting structure and floodlights. Over the years we’ve spent many nights offshore, and that was the worst one. But we always used a rig hook.

While fishing state water platforms, we’re often caught without a rig hook. It happens during an impromptu offshore trip when we may be in a bay boat or even a jonboat in perfect weather. You know the program—the jetties are muddy but the Gulf is flat and green, and so we bolt offshore. The weather is calm and usually we can slap a rope onto something, either a pipe or preferably a platform’s swing rope, which acts as a shock absorber. If a crewboat arrives, they may demand their swing-rope back, because that’s how their employees jump from boat to platform.

So, how do you snag a nice platform swing rope that is hanging only a foot or two out from steel? Years ago, out of desperation, I was on the bow holding a hank ofmooring rope, but we couldn’t get close enough to the rig, the seas were threatening to crunch the bow of our boat into structure. I started twirling the rope around my head like a cowboy, gradually feeding out more line until I had six feet going ‘round and ‘round. We eased the boat closer to the rig and just at the right moment, I slapped a foot of my spinning rope around thicker swing rope. At the same moment I gave it a yank and presto, had the big rope in my hand while we were eight feet out there in safe water. Then I’d tie my smaller rope with a simple noose just above a knot on the swing rope, and we’d back the boat off 15 to 30 feet, feeding out boat line, and tie off safe as you please. This could work on an overnight trip too, but the problem is the current will usually reverse during the night, and you would have to move the boat around to the other side of the platform.

You don’t always have to tie up to a Gulf platform, of course. Back in the day it was standard procedure, because outboard motors weren’t as dependable and at the end of the day, you could always stay at the platform if your motor wouldn’t start. It was better than floating away. Our gas tanks were smaller in those days, and we weren’t about to burn fuel all day around a platform.

Today, many boats spend the day drift-fishing these platforms and don’t even carry a rig hook. Nor do they shut off their motor(s) because fuel tanks are huge by yesterday’s standards. This certainly limits the options, however. What if the current is ripping? Make a drift in neutral and what seems like minutes later, you’re a quarter mile from structure and fish. On the flip side, some days you can’t use a rig hook, because the current is flowing into the wind, and it isn’t safe for the boat to moor anywhere. Anchoring next to a platform isn’t wise, because of debris on the bottom, including cables.

Drift-fishing the platforms is ideal when the current is light, and you want to avoid the triggerfish zone. Which is anything closer than 30 yards from structure on light-current days. On those same days, big snapper can prowl and feed 50 yards from the platforms. Not to mention other species, like kingfish. Set the boat broadside to the current, make a slow drift with everybody setting out a line, either straight down or casting. For this duty I’ve always preferred a 2-ounce jig that sinks fast with a cigar minnow attached. Friends Pete Churton and Dale Fontenot from the Beaumont area make their drifts while casting big silver spoons, letting them flutter deep, and they hook up all sorts of fish.

Weightless baits tossed further out are likely to be hit suddenly. That’s when a reel lets out a screech, a sure sign a fast-running kingfish has arrived. Out there away from the platform, there’s room to maneuver the boat and no structure to deal with. A runaway fish, even a tournament winner, can be followed with the boat. Chasing a fast fish while still tied to the platform increases the chances of losing the fish, since it can circle the rig or spool a reel. In addition, a big ling or snapper will invariably dive into structure when given the chance, if you’re close to the rig.

Three times we have caught tournament-winning kingfish while tied to Gulf platforms, where we had to untie quickly and pursue runaway fish.When this happens, you really want an efficient method for detaching, such as a small buoy at the end of your rig hook rope that can be tossed overboard as the motors are cranked. Many ropes sink, and you don’t want to return to find your rig hook rope tangled in barnacles far below.

Three big kingfish chased down and landed: The first time I was actually up on the platform, when Miss Amy in our small boat hooked a 38-pound king while she was jigging with a baitcaster jetty rod. With the swing rope I swung down into our boat like a 29-year old Tarzan, cranked the motor, and off we went. By then the king had rounded the platform’s corner, scraping her 20-pound line through barnacles, but she’d wisely backed off the drag. With the boat safely on the other side of the platform, it was a long battle until the gaff struck home.

The second time, I had a big fish spooling me on heavier tackle, but couldn’t stop it. We weren’t sure if it was a big shark, but went after it anyway. Once again the line(40-pound) was dragging over barnacles, but I’d free-spooled with my thumb on the spool. We drove around the platform, put the reel in gear, and followed for about 300 yards. I finally cranked up from the deep a dead 48-pound kingfish that had gotten tail-wrapped. It was a first-place fish.

The third time (different summer), I got a fast strike on the day’s first cast and line evaporated from the reel. My buddy untied from the platform’s swing rope in record time and we were off to the races, following that fish with the boat. A while later and about 400 yards away, he gaffed my STAR tournament-winning 55-pound kingfish. My line that day never touched the rig’s pilings, but did tangle with another boat’s drift lines, which were cut. We then returned to the platform knowing our day was done, we’d caught the apex kingfish for that spot, and soon headed for the dock. Overall I would like to thank Ande Line after all these years, for being so tough around Gulf platforms.