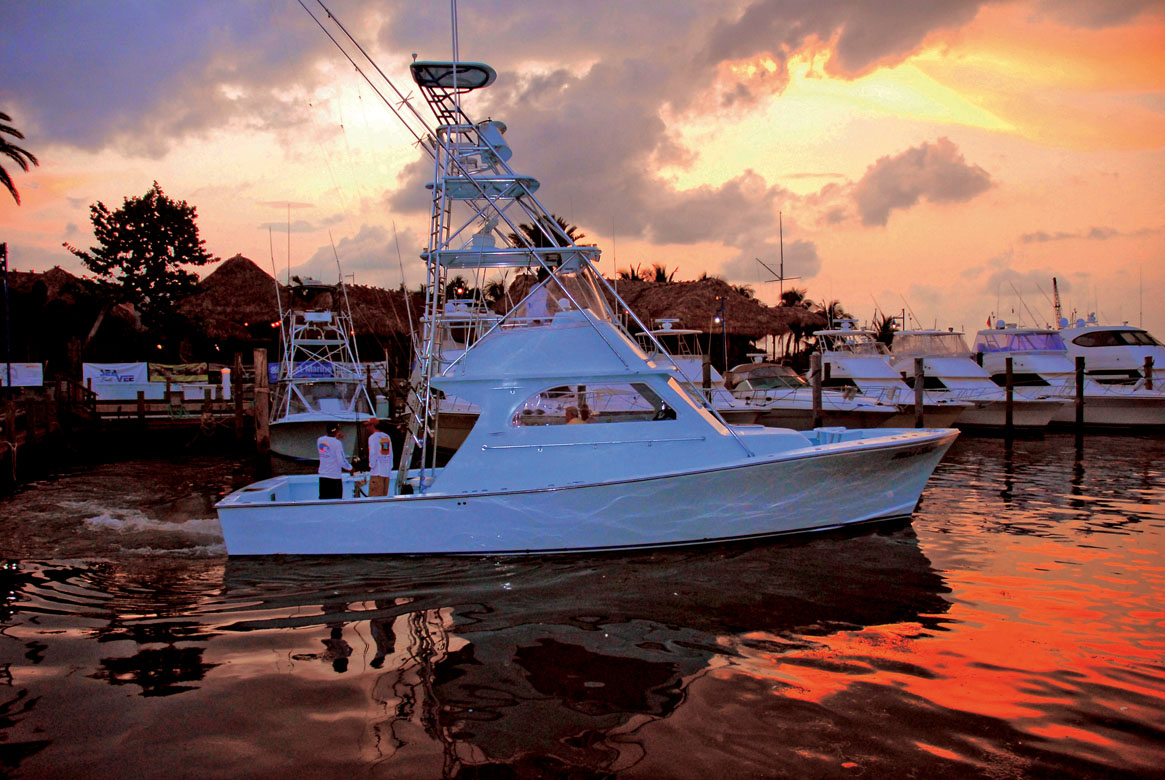 Charterboat making the dawn patrol. There is a good reason these boats seldom leave in darkness. They’re in this for the long haul.

The recent death of Miami's star baseball pitcher Jose Fernandez, while in a boat running at night, left me pondering all the night trips we've made over the years, running around out there with a few close calls and near misses. Fernandez was said to be quite the fisherman, and was riding with friends at high speed near Miami's rock jetties, which are piled in heaps. Texas jetty rocks are made of granite cut in rectangular chunks and fitted together fairly neatly. Boats have hit them before, even crewboats, but they generally ride up on top and stay on an even keel. Fernandez's boat hit a jumble of rocks not made for walking, and it careened the boat upside down, leaving no survivors. It was a terrible thing, adding to a long list of night-time fiascos for boat owners.

I must be getting older and maybe a bit wiser, because lately on my evening trips in the boat, I've made it back to port during the last few minutes of daylight. What a difference that makes, compared to darkness: That's when a channel marker, crab buoy, floating log, dredge pipe, sandbar, ICW barges or a fishing boat running without lights can reach out and grab you, causing varying amounts of damage. When we somehow get delayed out there, perhaps fighting a huge tarpon until long after dark, which we have done on a few occasions, we always carry a powerful flashlight, even on day trips. You can't always beat daylight back to the boat ramp.

As for heading out before sunrise, that can be a great thing but it often means leaving the dock in darkness. And the same hazards listed above are out there, waiting. Guides and others hoping to claim that honeyhole first, especially on crowded Saturday mornings, know what I'm writing about.

The only means of fishing after sunset, and then catching first light without running all over creation in darkness, is to spend the night out there. That means sleeping on a cabin in the bay, or in your boat, or on some bug-infested barrier island. If you're going to do this, I highly recommend going during a full moon, which makes a huge difference. The new moon, on the other hand, makes for the blackest of nights, and things can get turned around real quick, and mistakes made. And then there are quarter moons, which are better than nothing. When in doubt, slow down and turn on the Q-beam. I used to take pride in my night vision, which brought me home many times without shining a big light, but that might not spot floating debris.

And then there are today's onboard navigational aid charts, showing an angler where to run fast at night. I must be old school, but I don't really trust them. How many boats have clipped the last 10 feet of jetty rocks, or hit a floating tree? That's why we ran at 10 knots on our long Gulf trips, if we had to run at night. The theory was that if we thumped a tree or barrel, the damage would be slight. We once took five days to cross the Gulf from Mexico to Port Aransas in a 56 Bertram, stopping to fish deepwater Louisiana rigs for tuna, and had no problems. It took eight guys to keep that boat safely running 24 hours a day, though. A friend and I stood watch from 2-6 a.m. each night and we were vigilant as any U-Boat crew. Well, almost. We played some great music on the overhead while the rest of the crew lay comatose in their bunks.

But all it takes is a few minutes of darkness, to get into trouble. Our late friend Mark Puryear just missed daylight while letting a friend drive his 31 Bertram on a Gulf crossing. His boat smashed into shallow coral on the only real island way out in the Gulf Alacran Reef. Twenty minutes later, it was daylight and they found themselves parked on an atoll 16 miles long, with an island and lighthouse whose light they had ignored. They were about a hundred miles off the Yucatan coast, and the Bertram's bottom was ripped out. With the help of commercial fishermen, then the local Navy base, they eventually hitched a ride to the mainland with few possessions left. Where they were turned over to the Federales. They eventually flew back to Houston with only the clothes on their backs. As a reminder, Mark named his second Bertram Alacran, and kept fishing. Just 20 minutes of darkness had cost him that first boat. In later years he kept Alacran in Costa Rica and fished gentleman's hours on the calmer Pacific, catching many marlin and mahi.

We don't often run aground but when we do, it can be a headache. I once left Port O'Connor just before dawn, and managed to run dry at Decros Point on Pass Cavallo. Twenty minutes later it was light, and we sat there feeling foolish, the boat tilted in wet sand. But friends following us, salty veterans from Port Arthur, slowed their 18-foot HydraSport in time and soon pulled us right back in the water. In later years when I lived in POC, I came back countless times in darkness from Pass Cavallo, and without a hitch. Yet another night, a friend stayed out there a little past dark, and ran his 26 Mako way up on the shore about 70 yards south of the old Coast Guard station ruins on Saluria Bayou. (Lucky he didn't hit the concrete ruins). He called and we were up most of the night, using two boats to wiggle that big Mako back and forth a thousand times, back into shallow water. Didn't want to leave a fine boat out there where somebody might "salvage" it.

Offshore trips. Fifty years ago, guys in my Port Arthur neighborhood were fishing the Gulf rigs at night. They'd spend the night out there, it was gas efficient and they had lots of fishing time. And no bag limits. You could sell your fish, too. It was pretty ballsy, considering how poor weather forecasting was back then, and the lack of radar. And the small boats that were used.

Enter the 1980s offshore kingfish tournaments, when the fleet was turned loose at midnight or 4 a.m. in a mad rush for the Gulf. Looking back, it didn't make much sense, because the tournaments lasted two or three days, and there was plenty of time to fish before returning to port. Why run in the dark? At least one good-sized boat crashed into the Galveston jetties and was wrecked. The owner said he thought he'd cleared the long jetties, turned left and saw funny-looking whitecaps ahead. Turns out it was water breaking on the rocks. The boat was wrecked and people banged up.

Offshore for several nights aboard small boats in these tournaments, we then had to survive. If we anchored over a snapper rock, we could be run down by a passing shrimp boat or ship. (And almost were, by a group of out-of-state shrimp boats speeding towards the Texas coast for the July shrimp season opener). So, if we tied up to a nice big well-lit platform, we were safe from ship traffic. But the current changed every night, and could swing your boat into the platform. If the boat got jammed up under the rig in choppy seas, it was finished. If a storm hit, we had to scramble out of our sleeping bags to untie and figure out where to tie up next. You can bet we never left a rig and ran off into darkness–we stuck real tight to those friendly overhead platform floodlights until dawn appeared.

Well, we've made it this far. My friends are all now in their 60s, some even older, and we no longer run around in boats at night. Daytime fishing and evening's happy hour back at the housethat seems to be the program these days.