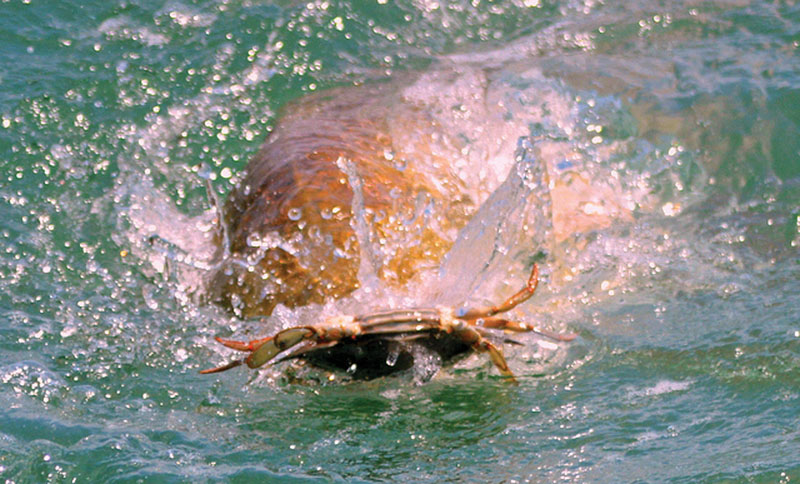 Bull redfish attacks a blue crab. Drop a fly into this action, and you’ll get a hookup real quick. Photo by Capt. Eric Knipling.

This past summer I was impressed with the rising number of fly fishing skiffs along the Texas coast. Or maybe I just kept running into them by chance. These skiffs are built for one or two anglers and powered with a single, small outboard. They get great mileage and would seem to have a lower environmental impact, compared to bigger vessels. They carry a long pole for exploring the flats in a slower, more traditional fashion, or can ease along with an electric motor for action in deeper bays or jetties. These "bonefish skiffs" are the opposite of the big tower boats with up to 300 horsepower, which are sometimes painted outrageous colors or with large advertisements, racing everywhere at high speed.

In this way Texas follows Florida. These skiffs have been popular in the Sunshine State for decades, and they've been arriving on our coast in increasing numbers for about 10 years. I think it's great to hear Texas anglers discussing the best push poles for this shallow water work. Protecting a designated area or shoreline from outboard motors would fill another story, but let's just say I'm happy to see these small boats fishing the old-fashioned way. And quietly.

I don't pretend to be a veteran fly fisherman, though I've spent a few days flailing away out there. On a number of occasions I've wished for a flyrod when we had none, usually on ice cream days when the surf was flat, or redfish were tailing on the flats, or tarpon rolling near jetty rocks. It makes sense to pack a small flyrod tube and reel on the boat, and I did in the past. However, mine was lost several years ago when we were moving, and wasn't replaced.

As for fighting fish with a fly rod, I've dabbled in it and even caught a few tarpon, either while standing on jetty rocks or in the Florida Keys. Caught trout, too. One flat-calm summer day, just for kicks, I landed ten hefty trout from the Sabine jetty with a flyrod. (For some reason they were hitting topwater bass bugs). But even the slightest headwind has been enough to put me off. In the Bahamas and Belize I have waded with a flyrod but I'm not too proud to carry a spin outfit over my shoulder, just for insurance. I'm also not a fan of blind-casting all day; I'd rather wade along and cast at visible targets.

It's a strenuous sport; you'd better have decent rotator cuffs in those shoulders, if you want to blind-cast all day. I hadn't fly fished in a few years, but last summer finally visited western Montana, where an old fishing buddy has relocated, and gone nuts over the sport. I forget how old Josh is, but he was one year junior to John McCain while at the Naval Academy, so that's getting up there. Josh booked us a guided float trip on the famous Madison River, and in June we drifted 15 miles in a rapid current, lashing mid-river rocks and the river's banks with various flies. I have fairly good stamina, but after a dozen miles found myself glancing around each new bend of the river, looking for the boat ramp. This was isolated country and we never saw a road or heard a car. It was a good thing the weather was nice. On the previous day, while we were on a small creek, a frigid rainstorm with lightning had left us scrambling for shelter in an old log cabin with a wood-burning stove.

Down the Madison River: Miles of shoreline swept by thanks to that brisk current, hour after hour, and my casts became sloppier as the afternoon grew long. Several casts tumbled in a heap on top of me, but our guide remained cheerful.

Capt. Marty Authement, who calls himself The Montajun, is from Houma, Louisiana; his life is split between fly fishing Montana's Big Sky and Louisiana's winter marsh, where his anglers catch 40-inch redfish on somewhat heavier fly tackle. Marty rowed all day against the Madison's current, to slow our drift. Day after day he does this; for this and other reasons, fly fishing guides are a healthy sort.

Anyway I landed the biggest trout of the day, a fish that ran 90 feet of line off the reel. Those were strong fish from a river whose current is swift. It was all very pleasing and a day for the bucket list.

Weeks later I was back in Port O'Connor, and began noticing more of these fly fishing skiffs. KT the fly guide has been there for years, first in a tiny boat that prowled everywhere, even off the Gulf beach. He had a bigger boat this summer that carried two anglers. I remember KT chasing crab-busting bull redfish in 2009, gunning the boat after each swirling red in deep water in Matagorda Bay. (A few boats were still looking for those same fish this past summer).

I also ran into fly fishing guide Capt. Eric Knipling, who is a longtime friend of Capt. Curtiss Cash, and on several nights there in POC we sat up until late, frying fish and telling stories of epic days. (We led a blissfully unstructured life there). Knipling's single-angler skiff with a Yamaha 70-horse four-stroke was parked in the driveway, and with that rig he must get about the best gas mileage of any Texas coastal guide. He lives in Rockport but also guides in POC when the fishing pressure gets too great back in his home waters. (They get a lot of tourists there these days; in nearby Aransas I even saw a black pirate ship with a hundred tourists crammed on deck, standing room only. Also an old ferryboat crammed with anglers, fishing the jetty. Wow.) That area seemed a long ways from solitude.

Eric has been guiding for years with his skiff, and he says quite a few boat companies have produced their own models.

"The price of these boats has gone way up, almost doubled in a few years," says Knipling. "It's a saturated market, now. I think some of these models may be more conducive to Florida waters. But Texas has more of an insulated economy, and a lot of boats are sold here. There are quite a few fishing the stretch from POC down to Port Isabel. Anglers should keep in mind that there's no perfect skiff; our bays are different. For instance in my area from Rockport up to POC, I'm more concerned with draft, versus running shallow."

On a good day Eric and his friends with these boats might check out the surf, big jetties, vast Matagorda Bay (where bull reds are targeted on top) and then the countless back bays where the water is often two feet deep on a decent tide. There are no miles-long, thin flats like they have along Padre Island further south.

"We had a very good year, though I have to say that tarpon were a disappointment. They showed up in May in POC and everybody was happy, but then they disappeared and didn't return. Only a few schools passed by offshore, where these small skiffs seldom venture," Knipling said. "And a few fish hung around the jetties at times."

One evening I watched a couple in a skiff near the end of the jetties, firing casts at the rocks for tarpon. They said they'd caught a hundred-pounder the week before. Both of them were dedicated casters, and just watching them required energy. And then next morning, another skiff came by our fish camp in the marsh, this new skiff working the shoreline with flies. Our crew tumbled outside to watch, spell-bound: their female angler showed great form. There is something about experienced, female fly-casters that spells poetry in motion. I was too impressed to even pick up my camera.

We will likely see much more of this in the years ahead, as the sport catches on here; the Texas coast has many quiet areas for fly fishing, far from any pirate ships. As for me, I need to find another fly fishing outfit. My shoulders are still okay, so why not? I already have a big johnboat with a nice push-pole for getting around in the shallows. And that recent session on the Madison River was a firm reminder that this sport has much to offer.