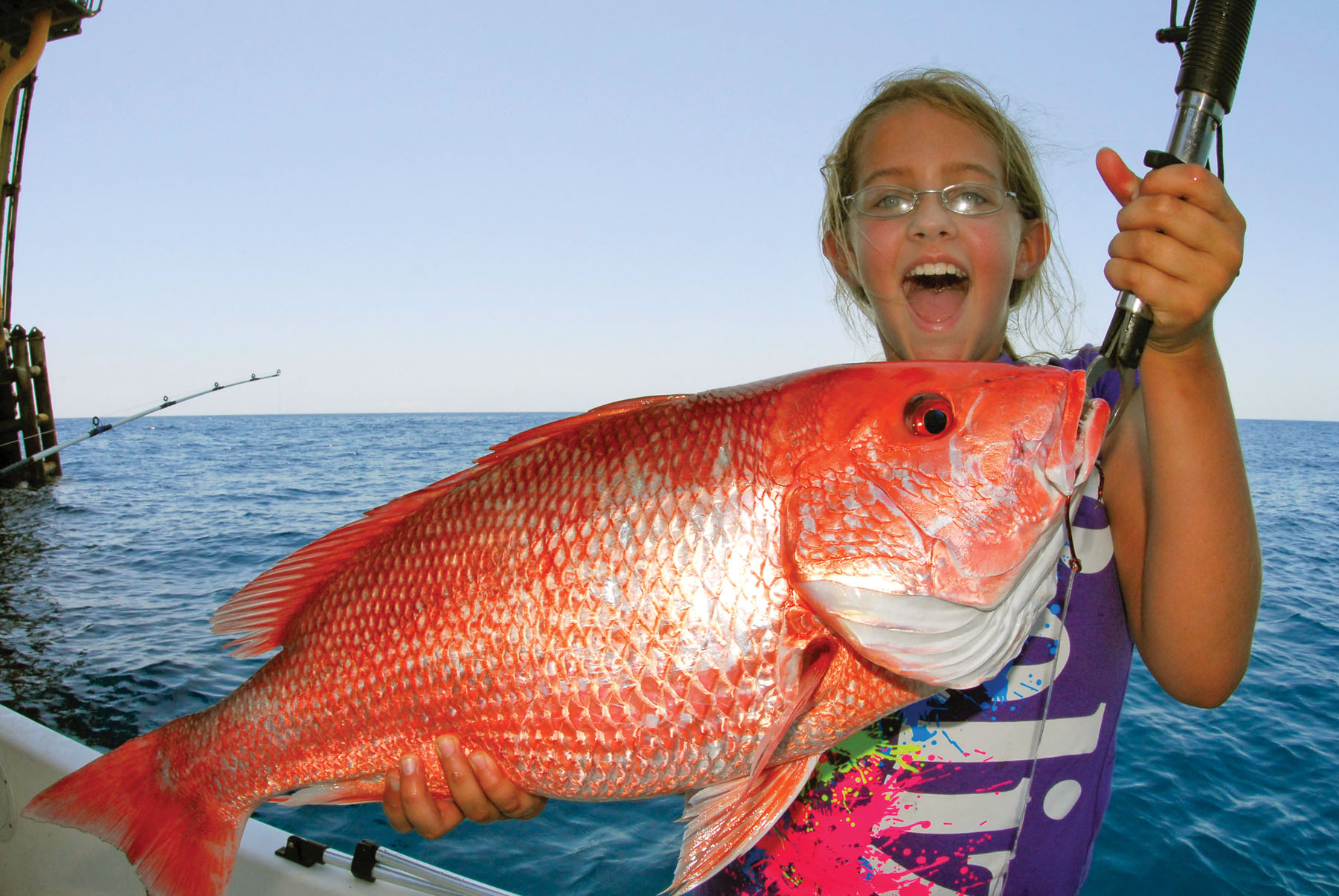 Even kids are catching 12-pounders these days, so its best to keep it sporty. POC’s Miss Lilly with a 15-pounder, the boat tied up in the shade.

Snapper season starts June 1 and as everyone knows, it's now easier to catch big red snapper than at any time in our lives. Even the graybeards know this is true. Today, saddled with the shortest snapper season in history, at 40 days, and with the average size of Gulf snapper now exceeding six pounds, the entire issue of bag limits and season has turned thorny indeed. While some boat crews openly mutter about hiding extra snapper in their boats, in defiance of federal law, others are pondering how to make their meager catch more sporting. Even a short bus full of kids can catch limits of 10-pounders these days, but somehow that plentitude is never enough to satisfy federal fish managers.

Anyway, some pointers below on instilling sport into the current two-fish snapper limit held mostly during the windy month of June. Everyone knows you should aim for bigger fish; keeping a couple of 17-inchers, after banging your way out past nine miles into federal waters, doesn't make much sense. Unlike redfish, "sow" snapper (as we called them many years ago) are almost as good to eat as the smaller ones. That's why every angler today prefers a couple of bigger snapper, say a minimum 12 pounds or so. Angler preference for big snapper somehow mystified fishery biologists, whose early calculations about population recovery never took this into account when allowing annual catch quotas. Permitted annual landings are calculated in pounds, not fish. Whoops! Back to the drawing board.

We had lots of fun with snapper last summer, using methods from decades ago, when we jigged up big fish, even from the stern of partyboats. Over the years since then, a favorite trick has been to drift-fish 50 to 100 yards past the platforms, beyond the (bait-stealing) triggerfish zone, after marking fish at mid-depth. Up-current of a platform is also good, where only stronger fish prowl unless the current is very weak. Pin a cigar minnow or something similar (even a mullet) to a 2-ounce bucktail jig, and drop it deep. In the 1990s this was fine for catching five-fish limits of 12-pounders, and may not necessarily be sporting today, with shorter bag limits. Perhaps we should now use no bait at all? Big snapper, after all, will attack a plain white jig if you give it a little action. And sometimes no action at all, on some of today's prime rocks offshore-where the big ones bite while the jig still sinks, and your reel suddenly speeds up under a panicky thumb. That's when you slap that reel in gear and hang on…

With jigs, there's no use in using heavy boat tackle. Back in the day we had many a desperate fight with 15-pound snappers while using 7-foot trout/bass rods and Ambassadeur 5500 reels, today what we would call jetty tackle in Port O'Connor. This lighter tackle, while the boat was tied to a Gulf platform, was often useless when a big sow headed for cover. Try drifting 100 yards from platforms, and you're free to fight them even without tightening the reel's drag. A 15-pounder puts up a considerable fight on this tackle, similar to or exceeding a redfish of equal size.

For even more sport, go with spin tackle. Spin is somewhat rare along the Texas coast, except in the lower Laguna Madre (where wind is always a factor, but it somehow gets more fight out of every fish. Last summer with Alan Reynolds' crew, way offshore in blue water off Port Arthur, we made drifts over his favorite snapper rock, where I used spin for the first time. I was hoping we'd anchor and turn the water red with fish behind the boat, but it was just too easy in calm conditions to slowly drift for hundreds of yards, fighting snapper. (As in, we don't need no stinkin' anchor).

Even over offshore rocks, however, protective cover might only be a short run for a big fish. With spin gear that day, I waylaid 27 nice snapper. Granted, it was 65-pound braid line on a sailfish rod, but the fight was sporty while using one of my home-made two-ounce banana bucktail jigs, fashioned from a Barlow mold. This jig was mostly white, but with a tuft of green deer hair I'd wrapped on the side. After landing many snapper, something ponderous grabbed the lucky jig and finally took it to the bottom, though I was pulling back hard…The line broke or was cut on bottom. Maybe it was a Warsaw grouper, because Alan landed a 20-pounder a few minutes later on heavier gear with his bigger Snapper Slapper jig. I tied on another jig and on the next cast was "bowed up" again.

That day I was using large five-inch pilchards I'd castnetted in the surf at the Alabama State Pier, during a road trip. Iced them down and headed for Port Arthur. Offshore the next day, you simply hooked one through the lips or eyes, and dropped it down. The other guys were using stinky menhaden (called shad), which works great, of course. But for the first time, my hands and clothes weren't smelly from baitfishing snapper-those pilchards were covered with large scales and were not messy. Not that I'm shy of using pogies, the staple bait we were raised on when offshore of Port Arthur. I suspect six-inch mullet would have worked just as well, though not many people catch their own bait these days.

Other crew members that day stuck with their bigger Slapper jigs, those big, hairy creations that big snapper love to grab, but my two-ounce jig with a pilchard was a hot ticket. It isn't every day you toss back 25 snapper weighing from three to 12 pounds on jigs. We could often see 20 red shapes under the boat, so we hooked them shallow and all released fish dove back down. In deeper water that isn't so easy.

I still haven't tried my modest collection of "heavy metal" jigs up to a foot long, like those made by Williamson, but those would be sporty too. I'll try them this June; might as well keep it sporty this year, and stop sweetening jigs with baitfish. Catching big snapper without bait is a kick, and perhaps they'll taste even better on the grill. (We favor the big, mesquite-grilled fillets covered with butter and Tony's spice).

I haven't tried it yet, but we have friends like Ben Maroquin of Austin who have caught sow snappers on fly tackle. They were in only 50 feet of water on the right day with a light current, using a sinking line, and after chumming snapper close to the surface. Of course, you would need to be in open away from the platform. A bushy fly works fine here, because these fish aren't exactly persnickety about fly patterns.

Chum Snapper to the Surface

You hear tales of anglers offshore dumping five-gallon buckets of chum, and watching red snapper feed on the surface. I've chummed up a few on occasion, usually while targeting kingfish, though without dumping an entire bucket. On one notable occasion at sunset, at a partyboat rock 45 miles down the Galveston fairway, we had big snapper on the surface itself, gulping down small menhaden. One of the snappers was literally right on the surface, and the sunset shone even redder through his upraised dorsal fin. I thought to myself: Okay, that's impossible, but I just saw it anyway. Depth of water was 75 feet or so and these "bottom-dwelling" snapper were right on top. I should have switched to a topwater popper and kept it sporty. Maybe walked the dog.

Thirty or forty years ago, a friend might see or hear of snapper that "turned the water red" at some spot off the Texas coast, though maybe once a year, and it was something to ponder and dream of. Today, you can see something like that on most any summer weekend offshore, if you try just a little. Carry chum and dish it out, and watch what happens. Texas red snappers are no longer furtive or shy.

Maybe we can take the tackle down to six-pound crappie gear, or a light handline. Catching a sow snapper on six-pound line would be a challenge, much better than the pool cue snapper rods we started with on partyboats in the 60's. Because let's face it, catching a two-fish snapper limit with sturdy 4/0 tackle is now about the easiest thing in the world. Once you arrive well offshore, of course. In June, catching a calm weekend is far more tricky.