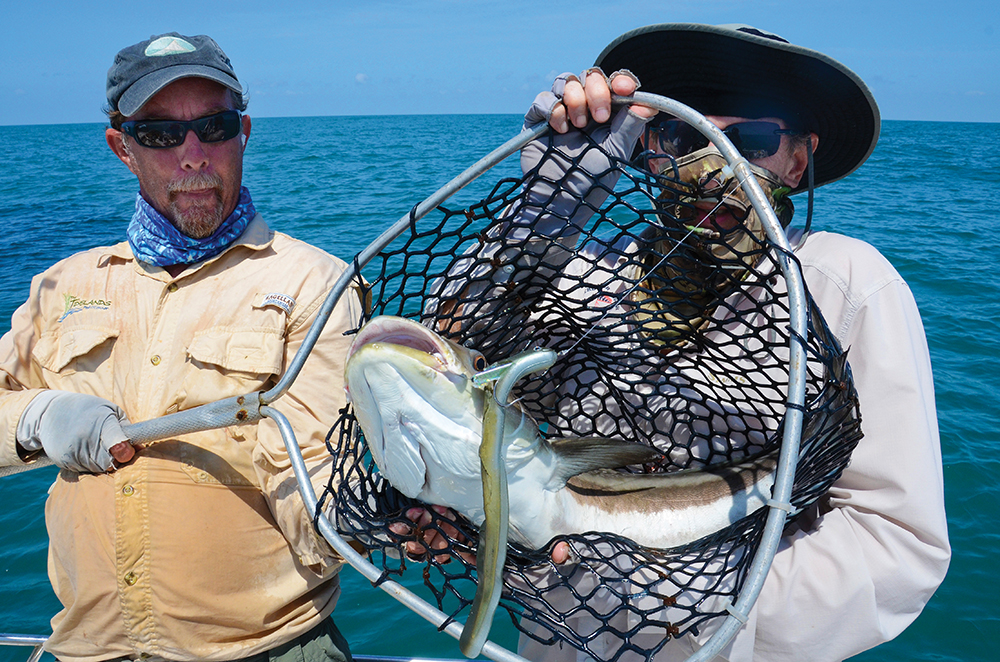 Another ling caught with an eel, ready to be unhooked and released if it will just settle down. Photo by Pete Churton.

April means the annual arrival of cobia (ling) on the Texas coast. These brutes prowl the entire Gulf of Mexico, traveling alone or in small packs, some of them big enough to resemble six-foot bull sharks. I’ve only seen one ling of that size, easily a hundred pounds, and it gave me pause enough that I didn’t even make a cast. We were young in those days, but knew how hard a 50-pounder would fight until gaffed, before it tried to wreck our boat’s interior. Our first attempts to subdue them involved fire extinguishers, later graduating to a Louisville Slugger bat, and finally a single-shot .22 rifle. Aside from one bruised hand, it’s a wonder we weren’t seriously hurt.

We lived in Port Arthur at the time and fished out of Sabine Pass, within a pistol shot of the Pelican State, which has even more of these fish. Steering even slightly to the east put us in America’s most bountiful population of ling.

These are unusual fish, swimming right up to inspect the boat, sometimes lingering for an hour. Even when hooked on the bottom, they’ll swim up to the surface and have a look, to find out what the problem is. In doing so, they may be gaffed within minutes and yanked aboard “green,” where they can create all sorts of mayhem and destruction. This landing technique requires an experienced gaff man and a clear spot on deck to land the fish.

Last time we tried it, about five years ago, the fish came thrashing aboard and we all ran for the bow while the ling went nuts back near the motor. Our boat was a 22-footer and had trolling rods standing in the center console rod holders. As I ran past, a pair of big treble hooks snagged the back of my shirt, ripped and then held tight, while the ling slammed around only feet away. Somehow he missed my ankles, while I considered ripping the shirt off. Once things quieted down, friends cut me loose from those hooks.

In our early years, we used any gear that was available, but soon learned that using the right tackle for the situation really did matter. For instance, trout spin gear around the oilrigs was a complete waste of time. Instead, hooking the fish with a stout rod and easing the boat away from the rig ASAP was the ticket, since these fish will dive through structure when possible. We also learned that it doesn’t take a fine, lever drag reel to handle a fish that, when hooked, seldom fights more than 30 yards from the boat.

We have caught many ling over the years with an assortment of tackle: sturdy 4/0 reels and short, stiff rods for bottom fishing; longer, stiff rods with something like the Ambassadeur 7000 reel for casting bait way out there; medium spin tackle (30-pound line) with jig or 12-inch rubber eel for quick casting without a backlash; and then the baitcaster reels on seven-foot rods we used to call trout tackle, but is really jetty gear with 20-pound line.

We have our favorites. On the day my shirt was ripped, a ling followed a hooked snapper up from the bottom and began circling the boat. (The late) Mike Cichowski tossed out a green twister tail worm, which was promptly inhaled. But the fish lunged around the motor and cut the light line. Still that fish kept circling the boat with a green worm pinned to its lip. And of course wouldn’t touch another lure. So, I tied a 2/0 J-hook to my own trout rod, adding a finger-sized strip of blue runner fillet. Then I tossed 4-5 similar pieces to the ling, which hesitated at first but then became greedy, eating all of them. Presented with the last piece with a hook attached, he stopped and stared from inches away, but couldn’t help himself, and sort of… sipped it in. I set the hook and the fight was on. That 30-pounder was soon in the box. I needed a new fishing shirt, anyway.

Matching tackle with your surroundings is the key. For instance, that medium spin tackle will cast an eel without a backlash, if you’re close to an anchored shrimp boat. Cobia often make only one pass by a fishing boat, before heading back for cover or shade. Backlash a bait-casting reel under stress, and the fish is soon gone. Or worse, a fish grabs your bait when the reel won’t turn. And that could be the only ling you see that day—they’re not exactly plentiful—nothing like they were in the early 1970s, when we saw schools of 50 fish on the surface, each weighing from 30-60 pounds. So, you want a quick-casting, accurate rod of medium strength, if there is little structure and plenty of open water. You will need finesse to catch them with that line class, and enough mobility to scoot around the boat, following the fish. I’ve seen people freeze in one spot, their rod bent to the water, ignoring all advice until the line broke.

It should be noted that serious ling fishermen along Florida’s Gulf Panhandle (paralleling Interstate-10) all seem to use quality spin tackle. They’re either camped out on the numerous fishing piers along the beach, up to 1,600 feet long that always seem to reach clear green and even blue water. These guys can spot ling migrating west along the beach, and will fire off a 2-3 ounce locally-made, finely-wrapped lead-head jig a country mile, using rods with oversized guides for minimum friction. And 25- to 30-pound line.

Meanwhile, a steady parade of boats with towers cruise along that beach, their anglers also equipped with no-backlash spin reels. Their casts are shorter, and they’ll toss live baits (eels and pinfish) though not as far as the pier guys. The boat guys are in safe, open water, but the pier guys, once their fish are pulled close, have to steer their fish through barnacle-covered pilings right underneath, which is no easy task.

Contrast that with my friends in Beaumont, Pete Churton and Dale Fontenot, who have forgotten more about ling than most people will ever know. They fish out of Sabine Pass and carry an assortment of rods, pretty much expecting to see ling on every offshore trip from April through September. They never kept count but after more than 40 years out there, they’ve racked up a hefty number of ling. Besides carrying the right tackle, there’s no panic, they keep cool when ling appear, throwing big spoons and jigs, fishing the entire water column, hooking fish from the bottom to surface.

Their biggest ling was an estimated 90-pounder that was tail-roped aboard and then released. They fished up to 50 miles offshore where the water is still only about 75 feet deep, with lots of oil rigs and several snapper rocks, and little fishing pressure. I doubt they ever fished a rig that had three boats tied to it. Their closest inshore ling rigs were called the Sadler Rigs, within sight of the Sabine jetties. (Former Port Arthur mayor Bernie Sadler tried to annex those rigs in the 1970s, thus the nickname.) During summer, back then when jetty action turned lame because of murky water, I’d sometimes venture out to the Sadler rigs in a jonboat, catching and releasing ling up to 40 pounds.

Catching ling doesn’t require expensive tackle, but carrying a variety certainly helps. Match that gear with the situation and stay calm. And remember to follow that fish even if you have to dance around the boat; hooking a trophy ling is no time to freeze up or get brain  lock.