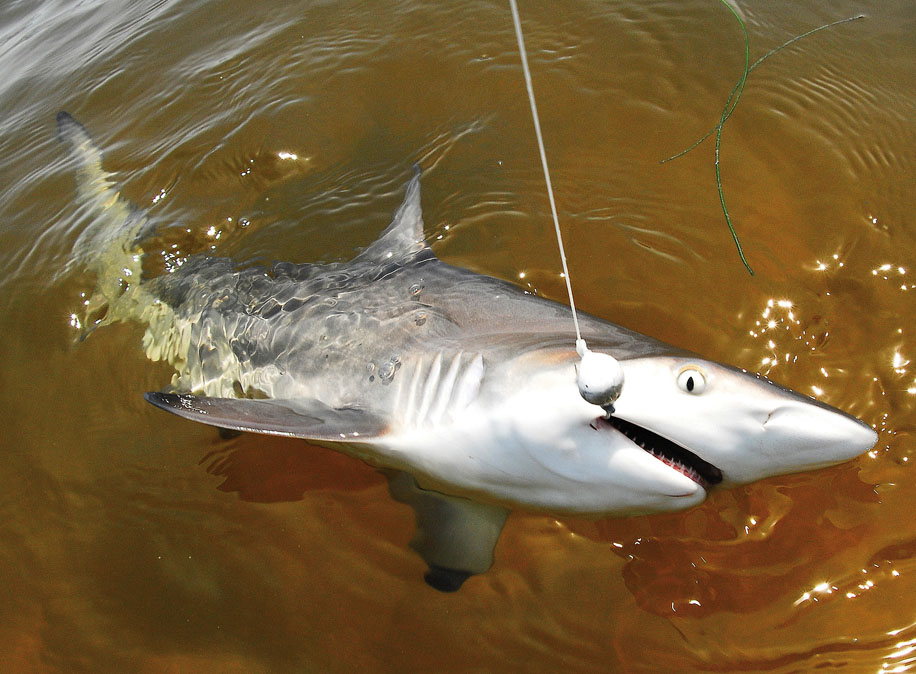 This feisty blacktip shark can easily be filleted and turned into a tasty fish fry.
I’ve been watching the ongoing debate over TP&W’s proposal to cut the trout limit to five from Sargent south to the Land Cut. They did so from the Cut south to the Rio Grande a couple of years ago; where it increased trout size slightly and helped promote more of a trophy trout experience. The “meat haulers” had to focus their efforts elsewhere, if they wanted a box full of trout. Or fish twice as many days.

Tremendous effort is expended each year chasing seatrout, the most popular fish in Texas bays. After all, they’re a handsome, versatile fish from the bays, surf, jetties and even offshore between Galveston and Sabine. They’re easy to fillet, and, when not freezer-burned, pretty good on the table. Trout also grow to trophy size, and anglers will wade all day in chilly water just for a shot at a (female) 8- to 10-pounder for the taxidermist. But first, however, trout need to live long enough, with a life span of about 10 years.

In my view, trout deserve a shorter bag limit. We all want a shot at that legendary 10-pound trout, and the chances of that happening only increase if we don’t meat-haul so many trout. Why not give this gamefish a break, and focus more effort on tastier fish? The nine species listed below may not carry the prestige and bragging rights of a stringer of trout, but they’re certainly better on the table. You won’t find seatrout listed as some epicurean delight; they’re merely dipped in batter or cornmeal, and fried. Fresh enough, and with enough Tony’s mixed into the cornmeal, they’re not bad.

Many others are better, however, so maybe its time to give trout a rest and not camp on them all day, or under dock lights at night, endlessly culling short fish (some of which don’t survive), while scratching out a legal limit for the freezer. The guides used to call this “grinding out pencils” back in the 1980s. Nobody knows how many potential trophy trout are weeded out at a young age.

For many anglers, it isn’t easy to break from the mold after so many years and memories that have shaped trout into today’s fashionable number one bay fish. But with so many boats on the water focusing on trout, it’s time to learn how to catch other species, and find out how good they are on the table. Or not; fish can also be released, even keeper-size trout, and a conservation ethic only helps a fish population.

Fishing guides are in a great position to teach the public about other fish species, along with conservation. After giving those much-requested trout a shot in the morning, how about showing your clients a few tailing redfish? Maybe a prowling school of keeper drum? A little spot where flounder hang out? Clients can also do more, by requesting more of a variety, or at least asking what species have been hot lately. Doing so will certainly spice up each day’s experience on the water, instead of simply anchoring and soaking live croakers as bait.

We can’t cover every tasty bay species here. However, below are nine bay and surf fish considered by many to be better on the table than seatrout. Most of them fight harder, too. Heck, they’ll even pull drag on your reel. Catch a mixed bag of these guys, and you can have serious seafood on the table.

Pompano. The classiest fish on the Texas coast, at least on the table. If you haven’t tried baked pompano, well, you know what Mr. T would say about pity. Pompano are so-poorly known in Texas, they don’t even have a bag limit. Yet they carry a hefty price tag if you ever find one in the market. These guys prefer green surf water, with Padre Island offering the most reliable venue. Since they feed only on crustaceans, they hug bottom. (Except at Gulf platforms out in state waters, where they’re seen on the surface). The pomp has a small mouth and prefers short, brushy-tail jigs that grab bottom and kick up little puffs like a fleeing shrimp or crab. Pomps hit gold spoons on occasion, but the serious angler throws jigs (or uses the long, 12-foot surf rods baited with shrimp). Tip the jig with a pinch of fresh shrimp for insurance. Ideal tackle for jigging is an eight-pound spin outfit, seven feet long, if you’re really looking for a perfect match-up fight. A member of the jack family, these guys have amazing strength for their size. Use 20-pound mono leader, because ladyfish, found in the same area, will shred lighter line with their sandpaper lips. Pomps arrive when the surf temps reach 70 degrees, and hang around through October.

Tripletail. Some Texas bays are graced with tripletail each summer, from June through September. They hang around structure, anything that provides shade, including crab trap buoys. Matagorda and Galveston Bays seem to get the lion’s share of these fish. They will eat almost any small, wiggling live bait, along with spoons and trout jigs. They’re incredibly strong, with “triple” tail fins, and they have a bad habit of charging into nearby cover. This makes catching them around solid platforms a real challenge; some guys use big casting reels like the Ambassadeur 7000 reel filled with 40-pound line. Catching triples in open water is far easier; just “cross their eyes” with a good baitcaster reel and hang on, with the drag not too tight, because they’ll run and even jump on occasion. Hook a 30-pounder on trout tackle, and you may have to follow with the boat. They prefer deeper water; at least, I’ve never seen one in wading water. They are after all an ocean fish visiting our bays. Fried chunks of tripletail will make your eyes roll back in your head like a hound dog tugging on Christmas turkey.

Spanish mackerel. Trout anglers are legion, but how many of them ever spent hours of rapid-fire action, slinging gold spoons at feeding Spanish mackerel? The ends of the jetties and a quarter mile out are generally best, from May through October. Sometimes, mackerel make a surge into the bays during late summer, but generally not far and only with a serious push of green water, which they pretty much demand. On perfect days in the surf with three or four feet of visibility, mackerel are probably close by. If your trout lure is suddenly cut off with scarcely a tap, thanks to razor teeth, that’s the mackerel’s calling card. Attach a short, thin wire leader, a three-quarter ounce gold spoon, and get to work with a fast, erratic retrieve starting from the bottom. When mackerel are thick, aim for those that are three pounds and bigger; they carry a thicker fillet. A four-pounder (more easily filleted than any trout) broiled or baked for 10 minutes with oregano, basil and rosemary, is superb on the table. That’s why since the early 1970s, my family has eaten about 30 mackerel for every trout.

Black drum. “Puppy” drum from three to eight pounds are quite tasty and offer a spirited fight. Better than redfish for their size, according to one guide. They’re a schooling fish sometimes numbering in the hundreds, and they’ll muddy the water with their bottom-rooting. (See the March issue of TSF). Drum of all sizes love oyster reefs in the bays, and also the base of jetties, where rocks meet the sand in 20 to 30 feet of water. They feed on crustaceans, not fish. One could also pitch out half a blue crab on sturdier tackle, if you want to wrestle with adult drum of 40 or 50 pounds.

Croaker. “Bull” croakers of 12 inches or so, fresh from the frying pan, will put trout to shame. But where to catch them? The most consistent spots I’ve seen are in deeper bay water, in channels or around structure. Try anchoring in 20-30 feet of water and using shrimp on bottom, during summer and fall. If catfish show up, move the boat. The huge annual croaker runs each October are a thing of the past for now, but with lessened shrimpboat trolling and their wasted bycatch, croaker may yet return to popularity. There are also numerous big croakers at platforms off the beach in state waters, each winter.

Flounder. Flatties were hit hard in recent years, but they’re making a comeback with curtailed harvest during their autumn migration into the Gulf. They’re widespread and considered a bonus on any wade-fishing trip. To target them, bump a twister-tail jig slowly on bottom around pilings, docks and seawalls—that’s the ticket to a limit of flounder. Bake or fry, your choice.

Redfish. Okay, redfish are thick these days and caught from every jetty on the Texas coast. They also tail on the flats and will wallop a topwater plug. Take a break from trout fishing and try stalking redfish, with a loosened reel drag. Or work artificials and live baits around the jetties year ‘round. Bake, grill or fry. If you have people who have never caught a bull redfish up to 46 inches or so, store 3-4 bigger rods in the boat, a supply of mullet or crab, and stop by the jetties for an hour.

Blacktip shark. A summer visitor favoring muddy water. Cut a small fish in half, rig it under a cork with wire leader and toss it out there. And hang on, these guys are tackle-busters. Blacktips are boneless, fillet easily, and they’ve supplied us with a tasty fish fry for up to 20 people, who thought the long fillets were trout and smacked their lips over it. Conditions were rough that weekend, the water muddy, but sharks provided. And we didn’t have to buy a box of highly questionable frozen fillets from Asia.

Sheepshead. Much easier to catch in colder water. They spawn January-April and will reliably attack any shrimp fished deep. They’re strictly found around hard structure. Jetties are best, then docks and seawalls. Very tasty when fried.