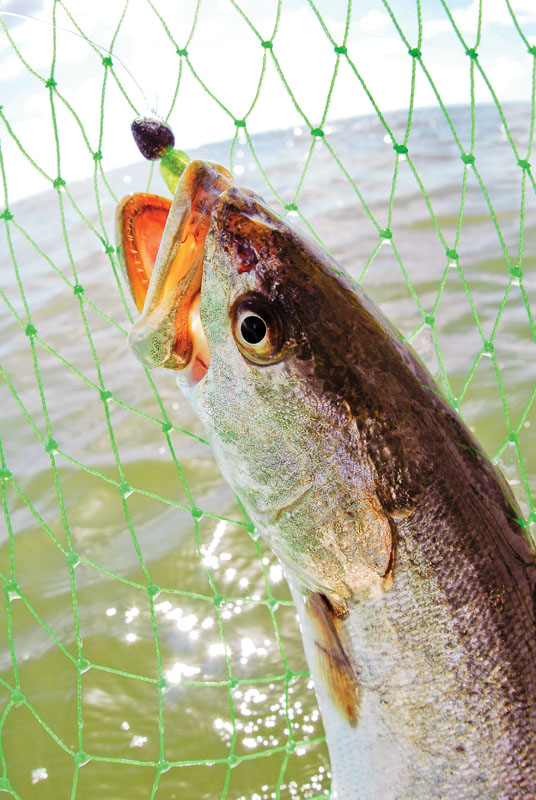 Keeper trout in the net on a fine day.
Those of use who have been on the water for a few years sometimes daydream of the times when the weather was perfect, the crowds gone and the fishing outrageous – way beyond catching mere limits. If you put in enough years, sooner or later it all comes together. Something to reminisce, when the weather turns sour before you even reach the water.

I never got to spend a week in the Chandeleur Islands, which would probably qualify for a great trip, if the weather and fish cooperated. Instead we took our chances on day trips along the Texas coast.

To me, getting wet is part of the formula for a perfect day, instead of cranking fish from a boat. Getting soggy means connecting with nature, despite the hazards hidden by waves and tide. A perfect day for me would have to include either wading or sloshing around on a low-wall jetty, while slinging artificials. (Catching them on "arties" is part of my formula, versus using bait. Fooling the fish, instead of feeding them). Having that MirrOlure get slammed way out there, and getting bowed up under a perfect sky.

I spent too many years walking the jetties, used up hundreds of spoons, had good trips and bad, but somehow they have all run together. (Save trips to the ER). However, there are three inshore glory days, what Joe Doggett and Rudy Grigar would call "ice cream" days, that stand out so brilliantly. Since they all happened in October surf, they are described here. Since history repeats itself with minor changes, along with weather patterns, perhaps these stories will be of use to the reader.

Advice: Watch for a stretch of calm nights, following a light norther. And then hit a weekday when the crowds are gone, and when the surf is flat and green. In October under a Texas autumn sky, with no wind? It doesn't get any better than that, and you have the makings for a "glory day" that can yield unlimited fish action. The kind of day you hope you can relive in some afterlife. (As opposed to, say, a reservation on the cheap side of hell, which wouldn't be nearly as much fun.)

So, here are three noteworthy days spent on the Texas coast, when we hit the ball out of the park, so to speak. With a little luck this month, it could happen again. And it should.

>One Monday I took out a charter of four guys from Houston. The weekend just passed had been blown out with southwest gusts, and we'd waded around in muddy back bays, real stingray water, catching an occasional small red. Not a good weekend. But Monday dawned different: No wind, boat ramps empty, nobody around, the Gulf impossibly flat to the beach and dark green. We anchored at the jetties and it looked very fine, but no action in a half hour. I kept glancing at the distant beach, shaking my head, and finally went after it. About eight miles south there was an old wooden shrimp boat sitting in chest deep water, like some Jack Cowan painting, and I anchored the Mako a hundred yards distant. We bailed out, walked the beach and approached without a sound. No hits on our gold spoons, save for one trout. So I climbed up about six feet high on the rotting shrimp boat, and spied about 200 redfish, swimming in a leisurely, counter-clockwise circle. I pointed them out and the action was on. These were all high-slot reds, save for one that ran me down the beach a good ways, a 37-incher finally landed on 12-pound spin tackle.

Having worked up an appetite, we left them biting and ran back to Port O'Connor, and had a leisurely lunch on the water at Clark's. I grabbed a flyrod at the house, and then it was back to the wreck. Still not another boat in sight. We fought more reds, but by now a small offshore breeze had sprung up in my face, and my limited fly-casting skills were useless. Still, our total by 3 p.m. was 61 high-slot reds. It was a wonderful day, and we were barefoot on the beach under a mild October sun. And didn't even raise a sweat. Ye Gods.

>On another fine October day, different year, good friends from Port Arthur were in POC for five days of tarpon fishing. It was slow at the Pass, you never know about tarpon. But the Gulf was flat, so we ran down the beach in two boats that morning, wreck-hopping. At a different wreck in nice, green water we anchored and were quickly hooked up. I didn't like two boats fishing close together, so anchored mine in knee-deep water, and the two of us got out and waded to the back side of the wreck, and slung MirrOlures for hours. It was glorious. We landed 40 good-sized trout, while the other boat landed 40 middle-slot reds and a three-foot tarpon. Every fish was released. Wading around in fine weather did it for me, and we never got a scratch from those needle-sharp plugs. By 1 p.m. we were happy enough to quit. A smooth as gravy ride back to town, and then it was time for a huge jalapeno and guacamole double-cheeseburger from hell at Josie's. And a nap.

>Sometimes, to hit the right day, you have to pay your dues. While in Houston, I got a hot tip from Port Mansfield on a Thursday afternoon in October, a guy said the fishing was out of control on the beach. We reacted like yanking a finger off a hot stove. Drove to South Texas that night, jonboat flying along behind. Slept in the truck, though not for long, before the guy tapped on our window at first light. We launched without coffee and crossed a mirror-calm Laguna Madre in our 15-foot jonboat, and out through the jetties. Our fatigue vanished: Not another boat in sight, save for our friend in his; and he only carried a flyrod. The Gulf was flat and dark green. (And so clear, I would later jump overboard at the jetties with a mask and could easily see 30 feet).

On the beach we anchored the jonboat, began to wade, and went to work. There were toothy critters out there, and all day I used an 80-pound mono leader with my gold spoon, which became worn almost silver. The heavy leader worked well because the fish were hungry. We waded barefoot in knee-deep water; there was no need to go deeper; a long cast would suffice. We never kept count of the trout, there were too many. Bonito came zipping by, a hard fight on spin tackle. Big mackerel, redfish, also a small tarpon landed. Later, a kingfish of about 24 pounds, caught only 40 yards from the beach along the jetty rocks. That afternoon the action slowed. That evening we returned across the Laguna into a setting sun, perfectly content. The day before Halloween.

Early May on the Sabine jetties, circa 1985, when the tide was green and swirling around the tip of the Louisiana side, the wind light and the seas calm enough that Pete and I could scramble over the "hill" at the end of the jetty and stand on that small flat space on the very end of the breakwater. The trout were thick and huge. Chunk a Bingo and let the current sweep it into the water eddying just off the end of the jetty, and a fanged yellow mouth would grab it. We were the only two guys fishing the end of the rocks. A gorgeous spring morning. I had a fish probably a huge red or jack or maybe a ponderous trout, empty the little Shimano Bantam 10SG reel. I had to hike back to the boat and re-spool.

When I got back, first cast, I caught a trout that measured a little over 32 inches, based on marks on my rod. (We never weighed the fish. What did it matter? ) We caught fish almost every cast while the tide was running, and when the tide was spent, so were we. Think I kept 10 or so trout, including two 30-inch-class fish. (The Louisiana limit I think was something immoral like 50 trout at the time.) We released dozens of fish, including some ponderous sows. I've had better days, with more and bigger trout. But for some reason, that one day sticks with me. Maybe it was because it was just me and Pete in an incredibly beautiful place on a perfect spring morning where you could actually feel the electricity of life humming all around us, like an aura or something. And, no, recreational chemicals were not involved.

Ha ha...good one, Shannon. Right where I spent countless summer days, too.