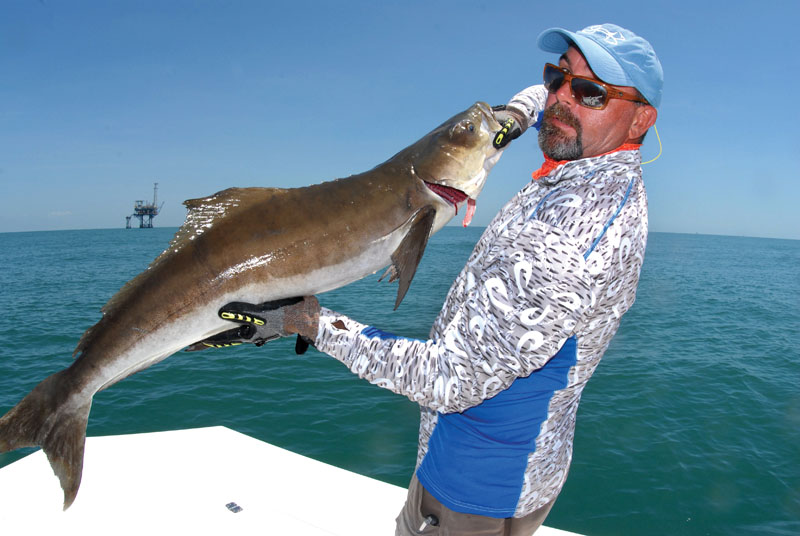 Capt. Curtiss Cash with one of 10 ling landed that day off POC. We saw 25 to 30 on the surface, and had fast action.

I've always preferred fishing the entire Texas coast. As luck would have it, this summer I was able to spend a great deal of time fishing and visiting friends up and down the coast. I wound up on nine different boats, from my aluminum jonboat up to a 27-foot Contender, and we had great days out there. When the weather is fine for weeks at a time, it's hard to beat action found along the Texas coast. As it turned out, we had the best June weather in memory, going back decades. And then July and August were very good. I kept going out until I didn't want to see another fish. For me, that takes a lot.

>I had three rod holders on different boats broken by fish, while losing one rod and reel, for the first time in about 30 years. Saved six rods from going overboard, if you count the one I jumped after at the POC jetties, on the day the water was clearest . Actually caught a $350 trout rod in the air as it was about to leave the boat; my buddy Dale Fontenot had set it down for a moment while rummaging in the ice chest for water. Turns out it was a big ladyfish.

>I fished out of Sabine Pass, Port O'Connor and Port Aransas this summer. At my peak I was in the boat 15 days in a row in August. Frequently I was by myself, but never suffered a scratch. An old dock plank gave way at a decrepit marina, leaving me stuck, and once I slid off a jetty rock into the Gulf. But fishing gloves, long pants and good shoes really help. (Same with the Buff mask; my skin doctor in September was impressed).

In Port O'Connor the days were long. Each morning was a slow amble into Speedy's for a cup of coffee and breakfast taco, while pondering the day's mission. In all there were maybe a dozen dawn patrols, not too many, mostly mid-morning or afternoon trips, depending on the tides. I spent several nights at a friend's camp in the salt marsh and caught fish from there, too. On days he weren't home, I just tied the boat up and fished from a lawn chair on the shaded side, with four rods set out with big baits, like eight-inch live mullet. That worked well for a time, mostly jacks and sharks and a few slot reds, until a plague of blue crabs arrived at the end of July and prevented bait fishing on bottom. At night, we sat out under the stars and cooked one kind of fish or another. Washed down with whatever was available.

I also had a stretch of nine days on the water in June, capped off with a trip 45 miles offshore Sabine in a 22-foot Key West boat. Perfect June weather for snapper season, go figure. The boat owner, Mike Cichowski, was my high school president and the other guy, Bud Reynolds, graduated with us, too. We go back a ways; between us we have about 150 years of saltwater fishing experience. And what a wonderful trip we had: countless big snapper, 12 kings released, also three ling. I insisted on dropping anchor 75 feet down on the honey hole and pulling it back up. Ironically, we had five bananas on the boat; nobody would eat them before we launched. Nor could we give them away at the crowded boat ramp–people actually backed away when I held up the Chiquitas. Their loss.

>One day Capt. Curtiss Cash and I eased out to the rigs off POC in his bay boat, not very far, and landed 10 ling among other fish. Saw at least 30 ling (almost all of them a couple of inches short) on the surface. We should have caught and released them all, to teach them to avoid hooks and grow up to become 90-pounders. We brought home two that day, including a fat 30-plus pounder. Ate fried ling for the next few nights.

>In my jonboat off Sabine Pass, I checked out the jetties, then cruised along a deserted Louisiana beach, searching for action. About six miles into Louisiana waters, I realized the old six-mile rig, still out there since we fished it in 1970, was straight offshore, and not far. The weather was fine, so I eased out to the big rig and was soon walking around on it, doodle-socking for trout. Also climbed onto four more rigs. Landed eight or nine small trout, lost a tripletail, caught two mackerel, nothing special. The beach was only a mile or two distant, minutes away, if a storm came up. But it was the kind of day where you knew it wouldn't happen.

>I've spent countless hours walking jetties and plugging the tides, and the simplicity of those days years ago still appeals. So, it was time to hit the rocks again. This summer I landed more fine trout from granite rocks than in many years. Often with a MirrOlure, which takes me back to the 1960s. One fine morning I released seven that were over 20 inches, and thought one trout would qualify for the STAR tournament. I couldn't accurately weigh this trout, had to carry it 100 yards back to the boat. By then it was dead. Whoops, only 25 inches with a ponderous girth, it was full of eggs... Not big enough. We ate the trout that night, which wasn't all that great. Bigger trout should be released unless they break 28 inches or so during a tournament situation. But what a fine morning that was, watching big flashes and boils beneath that MirrOlure.

>One day Dale Fontenot and I had 31 trout and seven big Spanish off Sabine, and left them biting. Dale had to get home by 2 p.m. and we were a long way from the house. On other trips Dale, Pete Churton and I "hammercocked" (Dale's word) big trout at the jetties, though no tournament winners.

>Three kingfish trips yielded a dozen kings each time, with two to four 30-pounders in the mix. The biggest was pushing 40 pounds, and had a bite out of its tail with sharks circling. All kings were released. On the June trip off Sabine, we ran out of mullet bait, pulling up big snapper. However, I always carry a plastic box with favorite kingfish trolling plugs, from surface to deep-divers. What a show, watching big kings hit those plugs just behind the boat in blue water. Big, silver flashes four feet long. Wow. It was dicey work, tailing big kings into the boat and prying loose big treble hooks within 30 seconds or so, and releasing them. We never used a gaff. I was spattered with blood and had a pants leg ripped from a flailing treble hook. Out of Aransas, David Bullocks from Yeti was grabbing 30-pounders on the first try and swinging them into the boat.

As always in summer, catching snapper was easy. The Feds may have winced at the calm weather we had this June; I even saw an El Pescador boat 20 miles out, with one guy jigging up 10-pound snapper by himself. John Milne and Marilyn Giessel had a sweaty time, cranking up big snapper for hours, while I waited for a big kingfish and saved my energy.

John Milne is a mild-mannered 70-year old US Marine flyer and veteran in very good shape, and he signed us up for the August tarpon tournament. Spoiling for a fight with a tarpon school offshore. Tarpon seemed scarce most of this summer, not that I spent much time endlessly cruising up and down the coast looking for them, that's all too hit or miss. But in the tournament we had no choice. The day before the event, serious tarpon guys came to town and were pre-fishing. That day about 20 of these fish were hooked and jumped in incredibly fine weather. John soon spotted a rolling school headed south at a brisk pace, on matters of importance, and he ran the Contender several hundred yards ahead of the school, and cut the engines. We readied spin tackle, knowing we'd have to cast, the school getting closer, closer, this was no time for a backlash with a level wind reel.

On they came, they were going to miss us by only 25 yards, casting range. But then the school veered left and passed right under our boat, at least 50 fish and maybe more. I merely flipped a live bait out 15 feet, it wiggled deep, and there were big flashes on it like trout on a plug, but these were five feet long. Came a thump on the line, that soon tightened. The little circle hook dug in. It was only a red Eagle claw circle hook, which I used all summer for most fish, but it still grabbed a little chunk of this tarpon's lip, and we were off to the races. I was almost spooled while hanging off the bow, the fish jumping four times, before Milne retrieved his lure and cranked both engines. We followed this hooked tarpon, which stayed with the school, until I pried it loose from friends with skimpy 25-pound line.

I fought that fish as hard as the line would allow, while sweating like a horse, because the Gulf was glassy, blue and still. Finally brought the tarpon alongside. It was the best moment of the entire summer, when Milne grabbed that leader. And it was the kind of summer that will get you through the coldest winter.