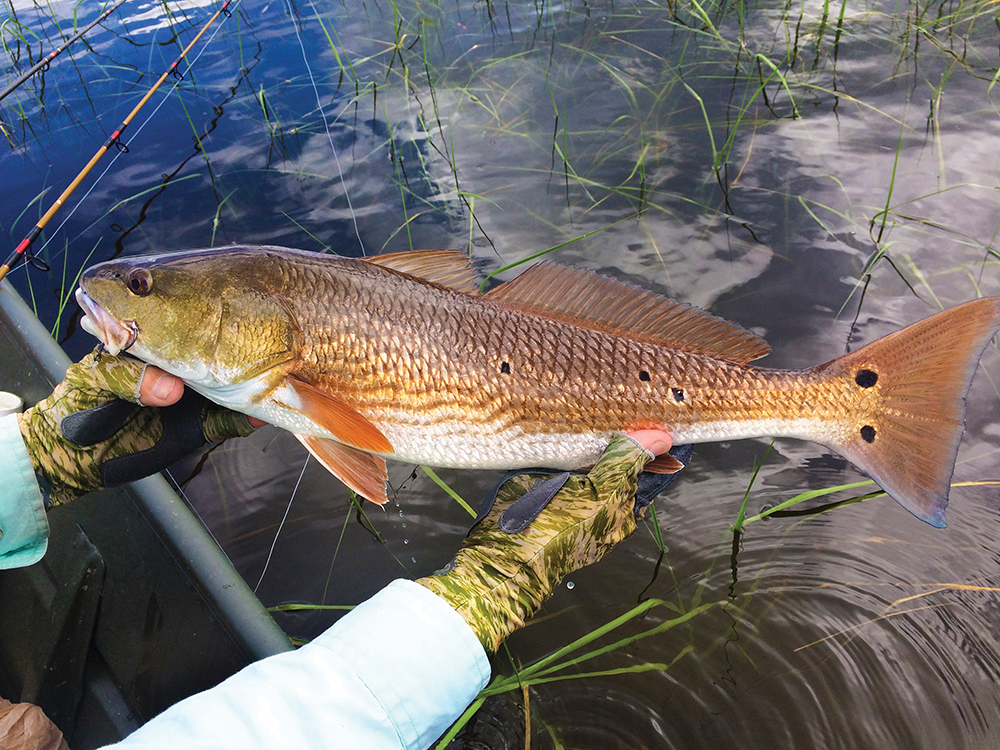 Comfortable Fish Monkey gloves made for handling lots of fish. Mine smell fishy most of the time, for good reason.

Fishing guides hoping to go the distance without injury or health problems have to cover up from the sun, changing weather and flying hooks. And their fishing clients do too; many of them just don’t know it. Even after all of these years, I’m dismayed how little people know about dressing properly for a full day on the water. As the holiday season draws near, a list of gift items seems like a good idea.

Hats. Starting at the top, I don’t leave the house without my Lefty Kreh-style cap circa 1980s, the one with earflaps. Raising a few eyebrows at my first big offshore tournament in Galveston in 1983, they called it my “pelican cap.” After three days and nights offshore in a small boat, with cruel sun and lots of flying spray, that hat felt pretty good. And I wasn’t overly sunburned, either. Others have not been so lucky. In recent years, we have lost two friends to serious skin cancers on the top of their heads; they couldn’t stop it from spreading. Today I won’t even check the mailbox without wearing a hat.

A good hat can prevent other types of injuries. My luckiest hat story involved two fighting, red shoulder hawks that were locked up in mid-air before crashing into the water nearby (while fishing a reservoir). Still fighting in the water, the two birds became waterlogged and sank lower while I took pictures. Alarmed at their plight, I used a wooden paddle to lift the biggest hawk onto the bow, where I was able to pet it. Within seconds, it flew up and landed on my head! Not sure why, but it gave me a squeeze with its talons before flying and perching on a nearby tree. That cap gave just enough protection from what would have been a serious injury. (Photos can be seen on my web site http://seafavorites.com/birds/raptors ).

Sunglasses. Recently I was reminded why I favor wrap-around polarized glasses, and not just protection from sun glare on water.  They also aid greatly in depth perception when light conditions are low, and you’re trying to find that stick marker late in the day, against a setting sun; or in mist and rain, for that matter. Forty years of sunglasses has helped prevent a host of eye and vision ailments.

Many of us have heard awful stories of anglers getting hit in the eye by flying hooks, plugs and weights, but here’s a new twist: Last week I rigged up a few leaders for a redfish trip; we would be using cut mullet in shallow water. Unable to find the usual spool of 40-pound line, I used leftover line from an old spool that felt like 40-pound. Next day, we’re out there fighting slot redfish and a bunch of energetic bonnethead sharks from 3-4 feet long. I landed nine of these sharks without a problem; they quieted down while I jiggled each circle hook loose. But then a stingray of 50 or more pounds grabbed a bait. Three times, I slowly hand-lined the creature close to the boat before it bolted and clamped itself to the bottom. You can see where this is going: On the fourth try, only six feet away, that leader broke at the swivel. Turns out, what I thought was 40-pound line was actually 30-pound; line and leader were identical. The metal barrel swivel flew past my eyes like a bullet, thumping off the underside of my sun visor. It could easily have put out an eye. Noticing that my client, who was retirement age, wore no glasses at all, I reminded him that we wear sunglasses for a variety of reasons, and having an eye put out by a lowly stingray is one of them. Staring at my green Cabos, he nodded in agreement.

Sun Mask. I started wearing a bandana face wrap in August 2009 in Port O’Connor, and didn’t see another one. People at Clarks’ Marina stared and scratched their heads; today, not so much. The generic “Buff” mask has become a fashion statement. Though a little thin, they cut sun exposure pretty well. Very hot in the summer, they can at least be worn while driving the boat. In cooler weather, they’re nice to wear, even warm and comforting during a cold boat ride, protecting from wind and sun. Add a little Neutrogena 50 sunscreen under that mask, to be sure.

Fishing gloves. Recently on a forum, one of the guides was griping how he gets cut on almost every trip, and he was worried about water-borne infections like Vibrio. Which is the very reason I’ve been wearing fishing gloves for more than 10 years. Thinner gloves are meant for sun protection and occasional fish (like fly-fishing for rainbow trout). And then there are the thicker varieties, with an extra layer of cloth or leather sewn on for handling a lot of fish, deflecting hooks, fish spines and occasional teeth. I’ve had flying lures stick in my gloves without penetrating much further.

Shirts. Sun-proof long sleeves made famous by Columbia more than 20 years ago are now standard fare. Keep in mind that 100 percent cotton feels so much better than polyester in hot weather. However, in cooler weather, the tight polyesters are ideal; smooth and without buttons, they’re also good for throwing a castnet. You don’t want net mesh snagging a shirt button just as a school of prime baitfish happens by.

Long pants. Give up on wearing shorts out there, guys, because skin cancer later in life is no fun. A skin doctor will carve your leg like a Christmas turkey. Bugs, sun, cold, rain, those long pants really feel good. Last year a medium-sized hardhead catfish fell off the hook onto my lap. It bounced from one leg to the next, each time landing on its poison fins, but somehow never penetrated my pants. Sometimes injuries still happen, though. A few days ago we returned at night after fishing late and watching the harvest moon rise over the Gulf. Back at the dock, I walked forward in the jonboat and was tripped up by something invisible, making me stumble. A little 1/0 J-hook on a leader had stuck in my calf and ripped the pants good. It also found skin, leaving a 6-inch scratch around my leg like a one-clawed bobcat. Wearing shorts, it would have been worse. Hours earlier, Miss Amy had been wading in shorts, practicing her cast-netting skills while I took a break. A sea nettle, maybe a foot long, passed by underwater in the current, wrapping around her bare leg just above the knee, knocking her out of commission and making her wish she’d had those long pants on.

Shoes. Wear decent shoes with inserted pads and good tread. I scored a cheap pair of Kroc shoes last year and started wearing them in the boat. Nice and impervious in the water if I had to step out, maybe throw the castnet or go ashore. They were good water shoes, but the bottoms wear smooth very quickly. Then I slipped and fell twice in the same week, careening off Igloo, boat seat or anchor box. Fortunately I landed light, nothing broken or bruised, though a topwater plug was sticking into my glove and was easily yanked out. I switched back to tennis shoes with a good tread, and no problems since then. Going back to 1978, I’ve only been hurt twice in boats, and each time I was wearing spur-of-the-moment borrowed shoes with poor traction I was unfamiliar with.

The opposite of wearing good shoes would be the once-common barefoot fisherman, many of whom received foot wounds. Several were good friends, including the late Capt. Howard Horton in Galveston. Aside from not wearing gloves and having three of his fingers left dangling from a small blacktip shark, Howard was almost always barefootin’. One day during a billfish tournament, a 30-pound mahi flopped all over the deck and stuck a big stainless steel hook completely through the top of his foot. The crew carried bolt cutters and cut it loose, and next day Howard could barely limp up the stairs at Josie’s restaurant in Port O’Connor. No thanks: I’ve had hooks sticking into my shoes a few times, but never my feet.

Other items: I’ve written before about those self-inflating PFDs that take up little space, and inflate automatically if you fall overboard. According to several of my clients, they’ve been real lifesavers, especially for the older guys. They’re not uncomfortably hot to wear during summer, either.

I tie a lot of knots out there while bouncing around, often in whitecaps. Miss Amy recently watched me fuming over tying a complicated knot in the boat; a combination of eyestrain and smudged reader glasses wasn’t doing the job. So, I’m pretty sure a hat clip magnifier, commonly worn by fly fishermen, will be waiting this year in my Christmas stocking.