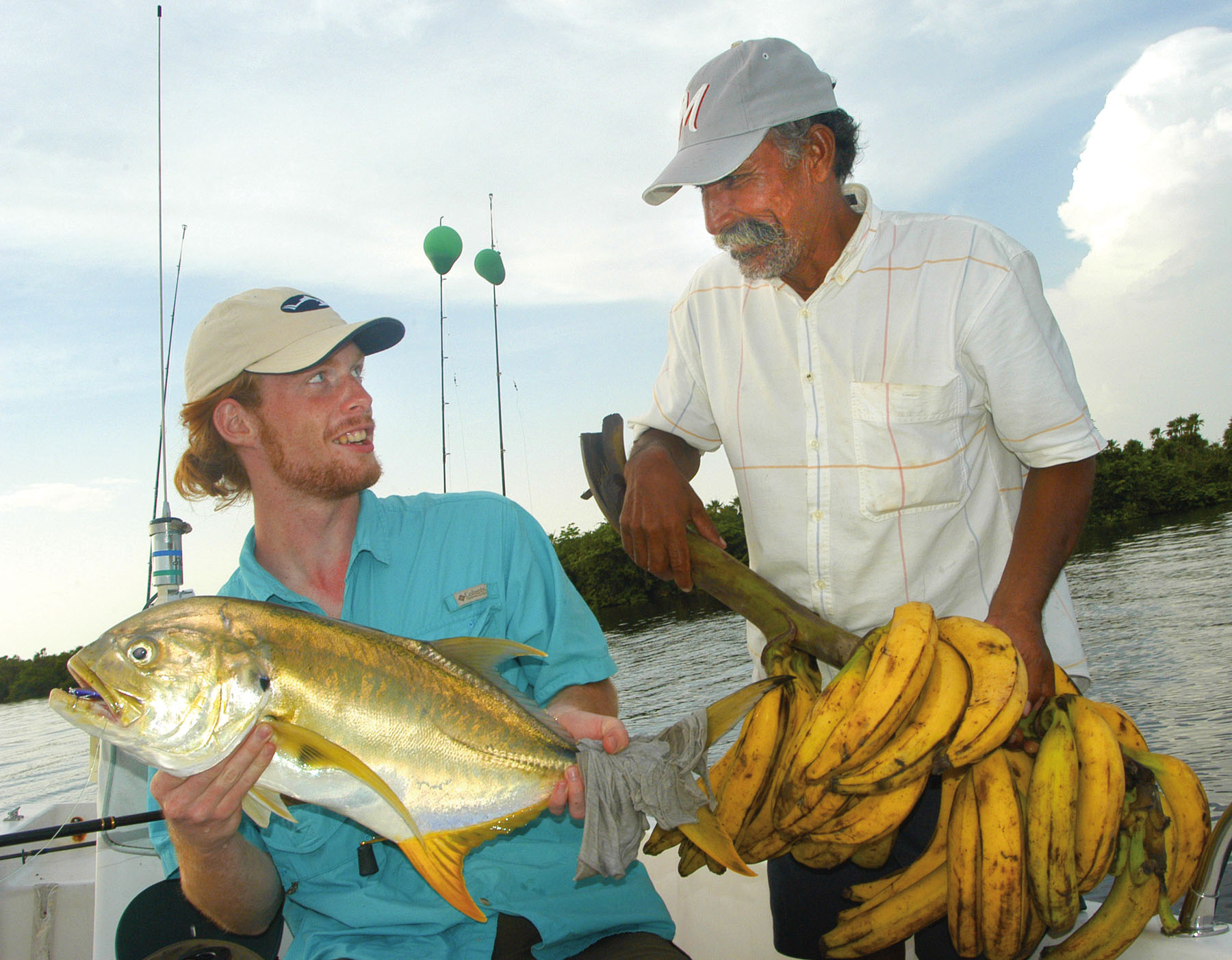 Ian Richard in Honduras, after landing a jungle-roving crevalle about 10 miles inland from the Caribbean. His Honduran guide has just scored a bundle of bananas from a rare, passing boat.
The true herald of summer is the return of the bay's most notorious fish, the jack crevalle. Hook one of these puppies in March, and that's when you know winter is done. (Catch a few jacks on the same day, and you'll be done too). Fighting these fish and stretching those muscles on a spring day can be a fine thing. Or not: Maybe you're sweating over that killer trout plug that might not make it back to your rod tip. And it won't, if you don't show initiative with this fish. Or maybe you don't care, and you're just happy to wear out this beast that doesn't know when to quit. The muscle power required to subdue a hefty jack must be the equivalent of landing a dozen slot redfish. Jacks are strong.

That's because they're solid red meat, much like a tuna. And it makes them much stronger than any whitebread fish. So, don't bother trying to cook a crevalle. And be aware that anything moving in saltwater is threatened by the jack. Any natural bait if alive, and any artificial that moves. The crevalle is also widespread; I've seen schools of big ones chase our trolled sailfish baits in blue water off Cozumel. Also fought smaller jacks on Rat-L-Traps in almost pure freshwater lakes barely connected to the Caribbean, down in Honduras.

Jacks invade Texas bays and jetties as early as March if the weather is mild, usually first on the lower coast when water temps reach 70 degrees. Green water helps too, commonly found off Padre Island. That's where I lost a dozen gold spoons I'd brought along for spring break, one year. Every jack on the Port Mansfield jetty was strong as a freight train, spooling me time and again at the end of the rocks. College babes back at South Padre were ignored: Instead we made the long beach drive each day in the sandy Volkswagen, catching a lot of fish, but none of them jacks. Our red reels (the reel that won the Gulf, years ago) couldn't stop these jacks while we clung to our rocky perches on the jetty, and we never turned one around. When threatened with a spooling, I thumbed down and broke off the 20-pound line way out there at the spoon, reeling back more than 100 yards of line. A dozen of those brutes were last seen headed for the Yucatan, wearing my shiny gold hardware either with pride or indifference. Back then we didn't have big tackle boxes like today, not even spare rods or credit cards, for that matter, and losing an entire card of spoons was a major loss. I went through a lot of them in those days, often a dozen cards in a summer, mostly while walking the Sabine jetties. And very few were snagged in the rocks.

Since then I have dealt grief to many jacks, as recently as last summer, landing four tournament-size brutes from 24 to 26 pounds on a single day. This time, mostly with 25-pound spin tackle on a sailfish rod. On that day we banged the boat 20 miles offshore, located a prime anchored shrimp boat, and 200-300 jacks came swarming up to greet us; the water turned yellow. These weren't the smaller 18-pounders, a common size each summer whether nearshore or in the bays. These were all around 25 pounds, some even larger, the size that win tournaments. My buddy Pete Churton refused to put a line in the water, so it was up to me, and it was warm work for July. A one-ounce jig head with a seven-inch twister tail worm caught their fancy. These fish weren't that hungry, the shrimp boat must have fed them well, but they couldn't resist a tiger-stripe twister tail worm. Time and again, they attacked.

Hard work on spin gear. I should have arranged extra fun for that bunch, maybe rigged 10 feet of dock line with a sturdy circle hook and bait. And just handlined them on a short leash–that would have been material for a YouTube video. After I worked that spin outfit for an hour we left, looking for something different.

Safely back at the jetties, I tied on a favorite thin, shallow-diving green plug to a small baitcaster outfit and soon landed a pair of three-pound trout. Things were looking up, the water was calm and green. It was a weekday, no potlickers in sight. And I had the magic plug. But then a big jack came from nowhere and inhaled it only 20 feet from the boat–I free-spooled the reel, thinking this one might get annoyed and spit it out, but it was no dice. For 15 minutes I coaxed that fish on 12-pound line. Oddly, that jack never took more than 30 yards. In fact it seemed to gradually weaken. When we finally netted it, we found the lure and all three treble hooks disappeared down its gullet, the jack bleeding heavily. We would have had to gut this fish, to find the lure. So I cut the line and watched the jack sink from sight. Well, the sharks have to make a living, too. That was enough fun with jacks, that day.

Back when I was guiding in Port O'Connor, I was delighted to have jacks appear in March. We could catch a few big drum if the tide was right, but fighting a jack was on another level. One guest from England had the battle of his life with a March jack, on what might have otherwise been a slow day. But catching jacks is relative; later in the season there were days we couldn't get away from them, while tarpon fishing. Each October at Pass Cavallo, countless jacks migrated into the Gulf, hidden by a dozen feet of water, hugging bottom. They grabbed our tarpon baits, sometimes all four rods, and you can imagine our dismay. I cast-netted our bait each day, and jacks liked them all.

The savagery of those encounters was something to see: We used 150- or 200-pound Ande mono leaders, often eight feet long, to accommodate tarpon. Hooked a dozen feet below, a jack would hesitate for several seconds, shaking his head, before sprinting for the horizon. I would pull mightily, grab the leader with one hand, and then make a quick wrap around a dock cleat at the boat's stern. The jack would go crazy-bananas, but couldn't break the leader, lathering the water white. When they were exhausted, we pulled them close and banged the big circle hook loose with a fist and away they went, probably headed for Mexico for the winter. If I missed wrapping the leader around the cleat, then it was another typical jack fight, though they didn't run too far on our 40-pound outfits. We didn't count how many we landed at one anchoring, but perhaps a dozen.

I don't know where small jacks hide in Texas. I've never seen them while diving offshore, or heard of one caught in the bays. It would be nice if they were around to brighten up a slow day. In many years of fishing the Texas coast, I've only seen small jacks at the commercial docks in Brownsville harbor, which is a tiny area. Where do our jacks come from? Small jacks are perfectly common in Florida's Gulf bays and beaches.

In Texas, if you hook a big jack from jetty rocks, "it's just you and him." I first heard that term from a Port Arthur (Sabine) jetty fisherman, and firmly believe it. Jagged rocks, cruel oysters and marine growth, and the fight itself all add up to a hazardous experience. Shannon Tompkins from the Houston Chronicle tripped and went flying years ago, while chasing a jack down that same jetty. The results were an ugly and painful wound to his hand, also a broken rod, soon followed by a trip to the ER that cut the day's outing short. He was hooked up with the jack of heartbreakers, that day.

Jacks are powerful even in the boat. One summer day we trolled Magnum Rapala plugs over the liberty shipwreck off Port O'Connor, in about 80 or 100 feet of water. Every time we passed over that wreck, another jack would hit. Not the more-tasty cousin, amberjack, but a crevalle. One of them flounced around in the boat while I was trying to extract big treblehooks from it, and one hook impaled my palm. Every time that jack flounced around I yelled a little louder, and it wasn't as much fun as it sounds. Somehow we got rid of that fish, and the hooks were backed out of my palm. That was one more reason never to use big, multiple treblehooks with powerful gamefish; they can flounce quick as a snake, the hooks are sharp and the ER far away. It's far safer to bring these fish aboard using big bucktail jigs with a single hook. Even safer are the big circle hooks we use while tarpon fishing. They're almost foolproof, and we've never heard of anyone getting hurt with one. Too bad we didn't have padded fishing gloves 40 years ago. Today I won't make a cast, without wearing Buffs.

Anyway, if you hook into a big jack, savor the moment and show your skills at landing one. Hook a second one, and you know a tough day is ahead.